BEIRUT, LEBANON — When Iranian General Qassem Soleimani was assassinated in a US Reaper drone strike in Iraq January 3, fear spread throughout the world that Iran might retaliate by launching proxy wars throughout the Middle East.

Here in Lebanon, that dread seemed justified. After Soleimani’s death was announced, his photos replaced the advertisements on billboards where the Hezbollah-controlled city of Dahye intersects with the highway that runs to Beirut’s airport. Soleimani sympathizers posted photos of the controversial Iranian firebrand on social media and on building walls.

Clearly, many Lebanese felt deep pain over his death. But others, like some people in the northern city of Tripoli, celebrated his assassination by passing out baklava desserts.

Two days after the drone strike, Hassan Nasrallah, the leader of Hezbollah — a regional ally of Iran — gave a speech that commanded the attention of Lebanon, not least because it happened during a huge rainstorm that kept people indoors. To diners watching televisions in cafes, to taxi drivers who listened while they drove, to people sitting in family groups at home, Nasrallah vowed retaliation for Soleimani’s killing.

“The American army is the one that killed, and it will pay the price,” he warned

Nasrallah’s response further stoked worry that Lebanon, a country wracked by war and invasion, will be swept up in another wave of violence.

Now the danger of an imminent shooting war between Iran and the US seems to have abated for the moment. Marie Debs, a member of the Lebanese Communist Party’s Central Committee, which generally opposes the competing religious political systems in Lebanon, said that what is happening between Iran and the US is actually the product of an ongoing war.

She believes the greatest threat of violence in the near future may come from bombings or attempted assassinations of some political leaders engineered by Lebanon’s neighbor, Israel.

While Debs said this could add more instability to an already chaotic situation, the real crisis the country faces is economic.

While most Lebanese were grateful to be out of the line of fire, their relief was tempered by continuing concern for the country’s dire economic situation and rampant corruption.

“Lebanese people are so used to war because of how many we have gone through,” she told WhoWhatWhy. “If you sit in a bomb shelter, you could still have a chance at survival, but the economic crisis means you can no longer eat, see a doctor, or live in a home.”

This frustration, felt by so many here, boiled over again this week with demonstrators targeting banks in Beirut in what they have called a “week of wrath,” in protests against the country’s economic crisis. On Tuesday night, the 90th day of mostly peaceful protests, some demonstrators, angered at the new prime minister-designate’s failure to form a government despite the crisis, started breaking bank windows in Hamra street, in Beirut’s financial district. Many protesters not involved in this action spoke out against the destruction, saying their message is peaceful. However, dozens of people were injured in street battles with riot police over two nights of violence.

This was a continuation of a protest movement that exploded on October 17, when hundreds of thousands of Lebanese people took to the streets. The protesters in the unprecedented cross-sectarian movement demanded the complete uprooting of a corrupt government with the slogan “kellon ya’ane kellon,” or “everyone means everyone.”

The near collapse of the electricity system is emblematic of the government corruption that has led the nation of more than six million to the brink of economic ruin. Each day, Beirut endures two scheduled 3-hour blackouts, and now these blackouts are worsening. Fuel for electricity is expected to run out by the end of February, Nada Al Bostani, the minister of energy, announced during a press conference.

All this is happening after a $40 billion deal that was supposed to alleviate the country’s electricity problems. Channeling the frustration of many of her compatriots, Debs blames all parties involved in the government: “Lebanese forces, Hezbollah, and Tayyar [a largely Christian-based party created by President Michel Aoun] are either dumb or thieves.”

Meanwhile, the weakness of the Lebanese lira (L.L) is further evidence of a buckling economy and the stress it puts on ordinary people. 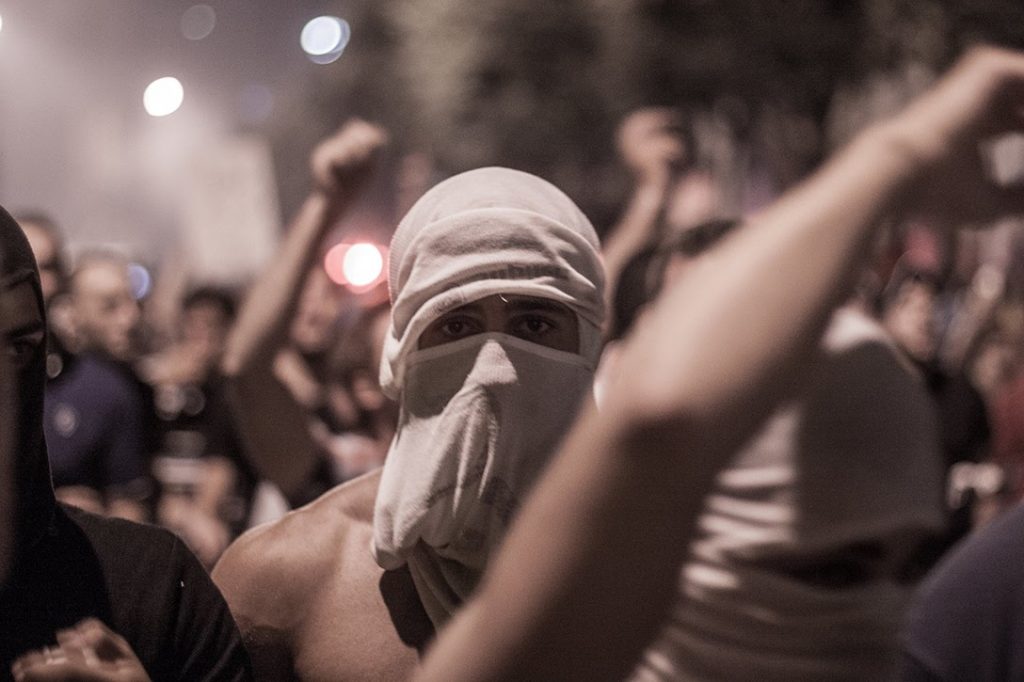 The lira has been losing value precipitously. In Beirut itself, it fell to 2,000 per dollar in January — compared to the official rate of 1,500 per dollar, a rate that’s been fixed since 1997 — and it is expected to soon reach 3,000 L.L per dollar. The Central Bank of Lebanon has reserved the majority of the country’s dollar notes for its own use, leaving limited access to the dollar for merchants and ordinary citizens. The shortage of dollars in the market has driven up the prices of imported goods, such as medical supplies and fuel.

Bank withdrawals are now limited to $300 per week. The new restrictions have caused a financial panic as crowds have lined up at banks, demanding their money; in exceptional cases, some have resorted to violence, physically intimidating bankers to let them withdraw more than their weekly allowance.

Regardless of whether people can withdraw money or not, Lebanon now teeters on a financial precipice and is facing social and political chaos.

Even before the current economic crisis, Debs said, unemployment was rampant, with up to 40 percent of recent graduates and people in their late teens unable to find work.

Mariam, in her 20s, who declined to give her last name, is one of the millennials affected by the economic situation. As she was fixing her hijab on the way out of the gym where she teaches boxing, she spoke about how she can barely make ends meet.

She had two jobs: one as a physical education teacher at a grade school and another giving private lessons at a gym. The money from both jobs was barely enough for her to get by, and now she’s lost her teaching job and also has fewer clients in the gym. School officials told her that physical education is no longer a necessity for the children and the school must focus its resources on academic studies.

When Mariam joined the school, she instituted a new martial arts program that she said most of the students enjoyed and actively participated in. In Lebanese schools, such programs are considered an extracurricular activity.

“I was given three months to teach, then they let me go, which shocked me and the kids,” Mariam told WhoWhatWhy. “The kids were trying to absorb so much in the three months. After I left, some of the older students came and registered in my [private] gym so they could learn from me.”

Mariam’s dismissal hurt her not only economically but emotionally as well; she feels bad for her former students who cannot afford to pay for private lessons.

One Beirut nail salon owner in her 40s, who asked to remain anonymous, walked into her salon carrying a large Gucci purse and wearing large designer shades which covered half her face. She was busy reaching out to her regular customers, trying to arrange times for them to get their nails and facials done. Her salon, located near expensive boutiques and beneath million-dollar apartments, has begun to struggle financially.

She said she had to lower her prices in order to stay in business. She doesn’t know how long it will remain open or when she will have to let employees go.

Like other Lebanese, she worries that war is possible, due to tensions in the wider region, but she fears an economic collapse even more.

Less than a mile away from the salon, on the crowded street of Hamra, sat Jihad Ghamloush, an avid protester (and a guitar player for the famous Arabic singers George Wassouf and Melhelm Zein). Smoking cigarettes in a cafe while waiting for a companion, he spoke with a low voice and in a hopeless tone.

He lamented that tensions between Iran and the US are impacting Lebanon, and said the two countries need to deal with their problems on their own. Ghamloush, who has lived through many wars since the civil war of 1975, said he doesn’t fear armed conflict; what he mainly worries about is the economic future of younger Lebanese.

Historical Backstory to Those Fleeing Syrians

“Economically, we are on a long and unknown road with no return to how we were before October 17,” Ghamloush said. “[Artists] are always the first to get hit from economic issues.”

People like Mariam, Ghamloush, and the salon owner, who work on a smaller scale, will be the hardest hit.

“The small associations — like small hotels, companies who hold small concerts, boutiques, and so on — many could no longer continue, so they closed and some lowered their salaries by 50 percent,” Debs explained to WhoWhatWhy.

People are scrimping in every possible way, going out to eat less, avoiding bars, and only buying absolute necessities.

This lifestyle is uncharacteristic of Lebanon — a country known for its lively restaurants, bars and cafes featuring local musicians or world-famous DJs, a vibrant theater scene, shopping malls and boutiques offering the latest international fashions, and a bay filled with yachts from around the world.

Debs said the first step to boosting the economy is getting the Lebanese people to spend on Lebanese-made products. But in the long term, she said, the country won’t get back on its feet until the current crop of leaders is ousted from power: “We are here now because politicians have been practicing politics wrong. They need to be punished for it.”