In a society deeply divided over gun control and ownership, Sandy and Lonnie Phillips occupy uniquely conflicted turf. In 2012, they lost their daughter Jessica to a mass shooter — but they are gun owners themselves.

Since their daughter was murdered in the Aurora, CO, movie theater massacre, the couple has traveled around the US to spread the word about why they believe gun control is important. When they speak in front of an audience, they notice that most of the attendees have been affected by gun violence, and they ask the victims to share their stories.

Like them, many of those people are actually gun owners standing against gun violence. Sandy Phillips explains that, while people are polarized on the issue, most Americans are somewhere in the middle. They want sensible gun laws — but not what Phillips termed “regulatory carnage.”

“We have to, as a nation, step back and see what is the greater good and what am I willing to give up,” she said. “Nobody is taking your gun rights away and nobody is confiscating, we just want people to be responsible with it.”

Polling shows that the majority of Americans agree with that sentiment. Most of those surveyed, for example, support background checks on all gun sales. Still, the gun debate seems ablaze when we read people’s social media arguments. The online rhetoric mostly breaks down into two extremes: either “they” want all guns taken away or “they” don’t care about gun violence and its victims as long as assault weapons stay legal. But that’s not the reality; it’s a false — if widespread — narrative.

Some people who work in the gun-violence arena see a bleak future for gun control discussions. There are, however, others who believe in the possibility of having a conversation about gun control in a non-hostile manner. 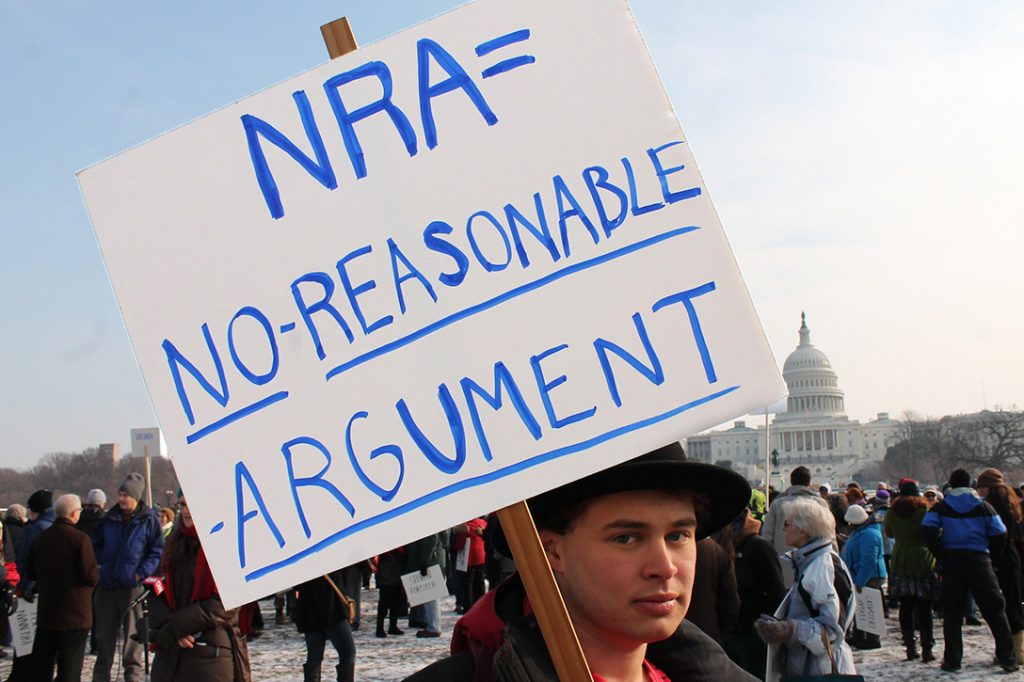 Demonstrator participating in a march on Washington for gun control on the National Mall in Washington, DC, on January 26, 2013. Photo credit: Elvert Barnes / Flickr (CC BY-SA 2.0)

Be Respectful and Talk Specifics

“The main thing that I’ve learned about promoting civil discourse on this subject or others is that it is easier to find common ground around specific issues than generalities,” said Phillip Cook, co-author of the book The Gun Debate: What Everyone Needs to Know.

It begins with asking open-ended rather than yes-or-no questions, said Robert Spitzer, author of The Politics of Gun Control. When people bore down into the issue, there’s a spectrum of ideas and stances on gun ownership. So, when we ask detailed questions, such as, “How do you feel about this certain aspect of the issue and why,” we evoke more nuanced answers, Spitzer added.

Jake Charles, executive director of Duke’s Center for Firearms Law, believes that to spur debate, and not just score points, the argument should not be only about data, or what somebody wrote more than 200 years ago. The stronger arguments come from experience and how things are affecting us.

“My general impression is that there’s a lot of emotional reasoning on both sides because of the strong ties to identity and cultural norms and values,” Charles told WhoWhatWhy. “I don’t think that type of argumentation is bad or off the table. It’s legitimate to talk about the way those things affect us.”

Josh Sugarmann, executive director of the Violence Policy Center, said he believes facts alone don’t settle an argument. If facts win the debate, Sugarmann added, then there wouldn’t be a debate anymore. But facts make a difference when people are having a one-on-one conversation.

The general rule of thumb when talking about gun control is to start with respect, Spitzer said. A person should evaluate and listen to the other point of view. Even if there’s no agreement, we should consider, and not dismiss, another opinion because we’d want such consideration ourselves.

Paying attention is important. Spitzer said these conversations shouldn’t occur when people are engaging in other activities, like during a football game or at a barbecue. These settings tend to have distractions. A conversation like this is better held in a quiet, casual setting, perhaps over a cup of coffee or tea.

Phillips said that she cannot talk about gun control in a town hall meeting, for example, because some of the people there have already made up their minds. When people walk in with their assault rifles, that’s when she knows the conversation cannot happen.

“When you’re carrying assault weapons on your back,” Phillips said, “you’re clearly trying to intimidate people around you. When I do see them carrying, I just kind of shake my head and feel very grateful for the officers who are giving security.”

According to Phillips, the safest place to have this conversation is on social media platforms — but experts disagree. Spitzer said he believes social media needs to be avoided when talking about gun control because it can foster extreme behavior.

Sloganeering predates social media, but Spitzer said it has gotten worse with the rise of Facebook and Twitter. But Charles argued that, based on his friends and his own experience, social media can be a positive tool when used properly. The danger is that it can lead people to more rigid views on hot-button issues, he added.

Language and sloganeering also play a role in how people receive the message. Charles believes that civil conversation requires avoiding accusatory terminology like “gun grabber” or “child killer,” or telling people that they don’t care about life or the Constitution.

‘I Hope You Don’t Outlive Your Children’

Of course, there are some cases where the other side can’t be reached, especially if a person’s intent is strictly to persuade, Charles said. People with views on far opposite sides of the debate are the most difficult to persuade, but they also tend to be the worst at persuading others. He added that the majority of people are willing to acknowledge the strengths of opposing views, as long as they are not extreme.

Given Phillips’s experience with the subject, she said she knows when to just end the conversation because sometimes all it does is add stress. “I don’t want anyone attacking me because I’m an unfortunate survivor. When we get pushback we say, ‘I hope you don’t outlive your children.’”

3 responses to “Discussing Gun Control Without Killing Each Other”