As a full-blown impeachment inquiry ramps up in the US, Britain comes ever closer to a chaotic departure from the European Union, and nationalism breeds mutual distrust among nations across the globe, it’s time for a break. Let’s visit Portugal.

Not for its beaches, food, or culture, as alluring as those are, but for the election. Tomorrow (on a Sunday), Portuguese citizens — who are automatically registered to vote when they turn 18 — will walk into their polling places and likely stick with the center-left coalition that lifted them out of austerity four years ago. Unlike other countries in Europe, Portugal lacks strong far-right parties.

The voters will make their decision after listening to civil, televised debates among candidates about the country’s most pressing concerns, at the conclusion of an official campaign that lasts just 14 days.

To say that Portuguese politics is not as polarized as the US is an understatement. Not only is there a consensus among many conservative and progressive candidates about what the nation’s problems are, the major political parties largely agree about the solutions.

They only differ on the margins, says Pedro Figueiredo, an architect and one of the founders of The Worst Tours, based in Porto. Figueiredo and his colleagues offer an experience of Portugal’s second largest city that engages visitors and natives in a discussion of the city’s past, current challenges, and future potential. He may be the only tour guide in Portugal who carries photos of former dictator Antonio Salazar with him.

For example, there’s largely agreement that Portugal needs to raise its minimum wage of €600 ($660) a month, Figuieredo told WhoWhatWhy. Young people, in particular, are caught in a vise between relatively low wages and high rents. 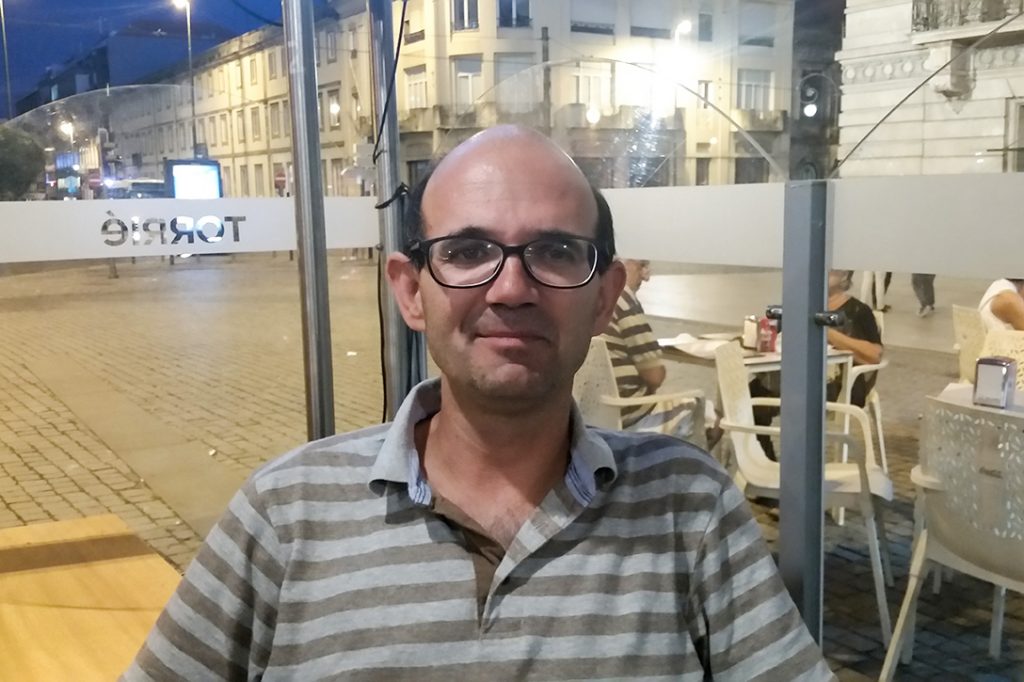 But by how much? The communists are pushing for €850, while the conservatives might go for €650.

There also is a political consensus about increasing public investments in healthcare, education, and social security for the elderly, Figuieredo says.

However, there is not agreement on every issue. The lack of affordable housing is a major problem in the country, particularly in big cities such as Porto and Lisbon. In 2012, conservatives relaxed rent controls in these cities, something the left-wing parties strongly oppose. But even socialists don’t want “too much rent control,” Figueiredo says. They are searching for a solution to increase the supply of affordable housing without destabilizing the real estate market.

Indeed, even communist supporters seem quite reasonable. A Lisbon cab driver volunteered she was voting communist to help her son have an easier time finding a job. Protections for long-term workers are too strong, she told WhoWhatWhy. Because of that, young workers only get hired on short-term contracts. Employers ought to have the right to fire employees who are unsatisfactory, she insisted.

What makes the political discourse so mellow right now? Portuguese grievances likely would be a lot sharper if the country had stuck with an austerity program imposed as a condition for a huge bailout from the EU and International Monetary Fund after the financial meltdown of 2008.

Portugal’s creditors demanded that Portugal cut public benefits, jobs, and pensions, something conservative leaders at the time were willing to do. In 2015, voters — fed up with the cuts — weakened the conservative government’s hold on power, opening the door to a socialist and leftist party alliance that defied the austerity orders. Gradually, the economy rebounded, helped by a huge boost in tourism.That helps Prime Minister Antonio Costa retain his support with the electorate.

Another factor: Portugal, a country of 10 million that sits on Europe’s most westerly Atlantic seaboard, has not seen a huge influx of immigrants and refugees from war-torn countries such as Syria and Afghanistan, Figueiredo says. Immigrants largely were drawn to European countries with higher wages and better benefits. “We don’t have an immigrant problem.”

The Portuguese also have fairly recent memories of what it’s like to live under a right-wing dictator. For most of the 20th century, Portugal was under the control of one man: Salazar. He kept the country out of World War II, doing business with both the Nazis and the Allies. He was an iron-fisted leader with a secret police force intent on isolating Portugal from the rest of the world, and keeping the country Catholic, conservative, and compliant.

Portugal didn’t emerge from dictatorship until April 1974, when Portuguese soldiers grew weary of fighting wars to hold on to Portugal’s colonies in Africa. The virtually bloodless toppling of the old regime is called the Carnation Revolution, because grateful citizens stuck carnations into the muzzles of the soldiers’ rifles.

Civility, however, doesn’t mean that the country is without problems, or that politicians are necessarily held in high esteem.

Cristina Rodrigues is likely the equivalent of a “soccer mom” in the US. The mother of two children, she left a good job working for Portugal’s largest corporation to spend more time with her family, after investing in an apartment near the beach in the posh Porto suburb of Foz do Douro, which she rents out to tourists through Airbnb. Her spouse is a civil engineer.

Rodrigues and her husband used to work in Lisbon, a city she finds too big and too impersonal. In contrast, their life in Porto’s suburbs is far more tranquil.

“Everyone has a good life, a nice life here, and everyone is safe,” she told WhoWhatWhy. “We live in a wonderful city because we have the sea, we have the sun, the food is really nice, so we can have anything we want.” But she worries about the future, and doesn’t think that elected officials are doing a good job planning for it, or even addressing current problems.

Healthcare and education are two of her main concerns as she goes to vote. Rodrigues’s father, a retired university professor, was active in socialist politics. Her husband, Miguel, grew up in a conservative family. His father was the longtime conservative mayor of Vila Real, a regional capital in northern Portugal’s wine country. Their different political backgrounds weren’t a problem,Rodrigues says: “We’re adults. We don’t [live] politics in an extreme way. We know how to separate things.”

Too many Portuguese health professionals are leaving the country, she says, because their wages are too low. There have been strikes at hospitals over salaries and working conditions. She believes the government should take steps to increase the number of Portuguese students who train to be physicians. And current doctors should be offered the opportunity to work fewer hours, so they can augment their incomes with work at private medical clinics.

Likewise, she wants to ensure that Portugal’s public schools remain strong. Educated citizens, she says, will be engaged in their democracy. 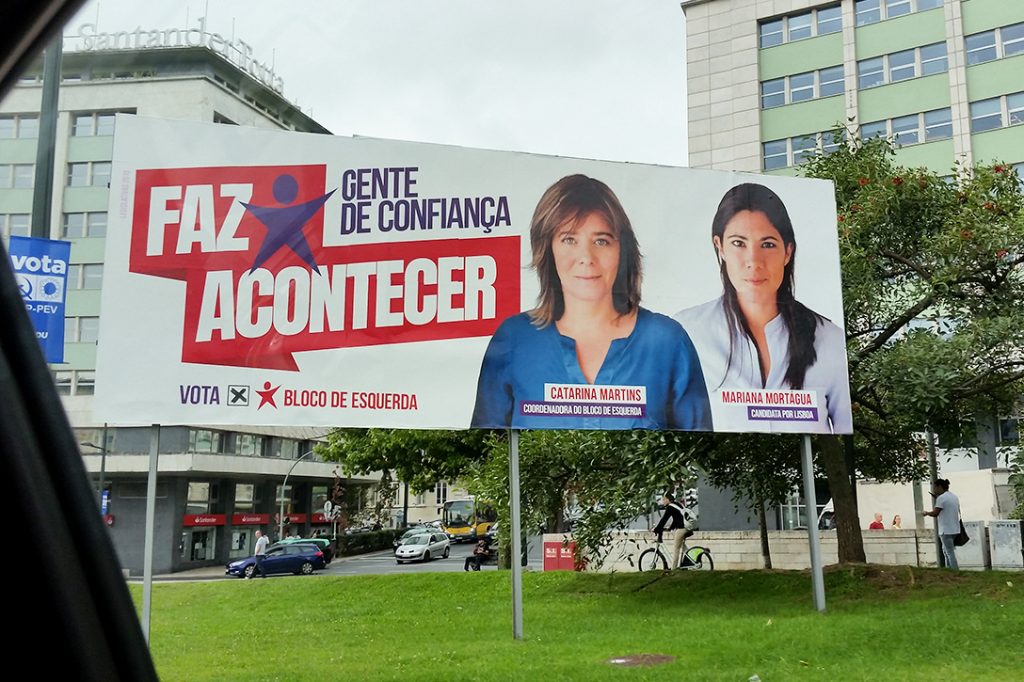 In the two weeks before the parliamentary election, large campaign billboards go up across Portugal, like this one for the “Left Bloc.” Photo credit: Courtesy of Richard Wexler

She also worries that elected officials care more about lining their own pockets than benefiting their constituents. There have been recent scandals implicating Portuguese office holders in relationships with special interests that involved money laundering, bribery, and tax evasion.

Like Figueiredo, Rodrigues is concerned about the soaring cost of housing. The fact that increasing numbers of tourists are willing to rent apartments makes real estate more expensive, and contributes to the rent spikes. “I’m part of the problem,” she acknowledges. But, she adds, the government should have done more to address it much earlier. Only now is the government beginning to regulate short-term rentals, she says. In addition, policymakers should be offering tax breaks and other incentives to encourage property owners like her to offer longer term rentals.

Prime Minister Costa is not only encouraging Portuguese professionals who left the country in search of better jobs to return home, he also welcomes increased immigration.

Rodrigues opposes that position. “It doesn’t make sense,” she says. “We don’t need a lot of foreign people to come here.” Instead, she says, the government should concentrate its efforts on increasing the potential of its own citizens.

Rodrigues is not alone in that view. During several conversations with Portuguese residents, none expressed enthusiasm for welcoming more immigrants into the country.

Repeatedly, they expressed fears that the Portuguese, who tend to cherish their families and put a premium on kindness and hospitality towards strangers, could be exploited by newcomers.

When others appreciate their country, the Portuguese tend to be surprised and pleased by the attention, Rodrigues explains.

She brought up the example of Madonna, who, with great fanfare, moved to Lisbon in 2017. “We felt grateful to Madonna” for having “chosen to live here,” she says. “That’s how we think.”

Lisbon’s mayor reportedly went out of his way to accommodate the performer’s 15 cars in Lisbon’s medieval Alfama neighborhood where parking is in short supply, much to the chagrin of longtime residents. (Madonna recently complained that she felt “bored” in Lisbon and may leave the country.)

“We are a small country,” Rodrigues says. “We are a traditional country. … I guess in a way we are a naïve country. Everyone trusts everyone.”