Climate change is altering the migration patterns of sharks, and they are now turning up in greater numbers in places where they used to be rare — because the water is warmer.

And scientists can predict where they are likely to show up, says Stephen Kajiura, a shark expert at Florida Atlantic University.

“I think having an idea of what waters sharks are best attuned to gives us a predictive power to say, ‘Hey, within these warm waters, we can expect more sharks off Long Island, and let local residents know that sharks will indeed be swarming by their favorite beach,” he told WhoWhatWhy.

And if the idea of being told to expect plenty of sharks off their local waters sounds unsettling to some, Kajiura said the exact opposite should be true.

“I need to remind people that a larger number of sharks is a good thing, and indicative of a healthy ecosystem,” he said.

“That means there’s a good base of fish for them to feed on. I think that’s an important factor. It’s not a fear-factor thing. It’s great. I think we should be glad we have more sharks.”

Where the Sharks Are Going, and Why

Kajiura has been part of a research project since 2011 that surveys the coast of Florida in a plane to see where sharks are heading as they make their way up north. By using tracking devices, he has since discovered that thousands of sharks move north each year. Initially, the farthest north the sharks reached was North Carolina.

Then in 2016, something happened: The sharks started a new migration pattern that has remained steady every summer since then. Where, and why?

“We noticed the [sharks were only in Florida] in the winter time and migrated north in the summer. That’s not anything new, but five years ago, we started putting transmitters on those sharks so we could follow them, to see where [they were] going when they left here. We wanted to see what the extent of their travels really was, because the literature said they would go to North Carolina or Georgia.”

Three years ago, the sharks began swimming right past those two southern states — and continued on their northern track hundreds of more miles to the waters off Long Island.

“What we found through watching these sharks is they are going way farther north than anyone expected,” he said. “They’re going all the way up to New York, which is a 50 percent farther migration than expected for this species. They are aquatic snowbirds, coming down here in the wintertime to enjoy warmer waters.”

So, what changed? The temperature of the ocean was a major factor: The waters off North Carolina and Georgia were becoming too warm to stay in, as had been the case in Florida, so they kept heading north. 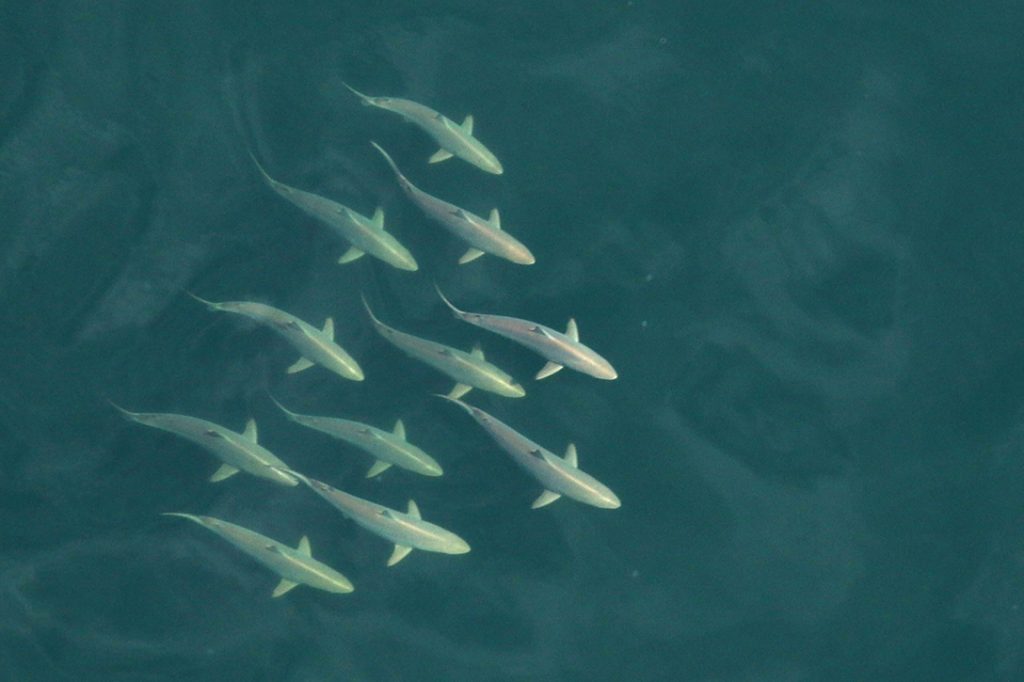 While this may sound interesting for scientists, does this research have implications beyond fish? Absolutely, Kajiura said, since this study is also tied to global water temperatures — and global warming.

“Climate change is really having an impact,” he said. “Sharks have survived enormous amounts of environmental change, which really is a testament to the stability and the flexibility of these animals. They’re not stuck in a rut, basically.”

His research also demonstrates that the 2006 Consolidated Atlantic HMS Fishery Management Plan, which implemented measures to end overfishing of sharks in the Atlantic and help rebuild the shark population, is working.

“Shark abundance is probably going to keep increasing, with regulations put in place to control shark fishing,” Kajiura said. “That means the population will go up, which is good.”

And by tracking the sharks’ migration patterns more precisely, scientists can also alert  communities when there’s likely to be a migration of sharks in their area — giving municipal leaders the option to warn area residents and visitors.

“If you suddenly have 10,000 sharks off your beach, you’re going to pay attention,” he said.

That combination — a growing shark population and better tracking of their migration patterns — allows scientists to better pinpoint where sharks will congregate in the summer.

How Global Warming Has Made the Rich Richer

“If anything, we’re going to start seeing better numbers,” he said. “With better tagging data, we can archive what temperature the shark was at, what depth the shark was at, and see where these sharks are going.