As six-year-old Oz bashfully listed the things he identified as threats to the environment — such as plastic water bottles, bad people, and rising temperatures — he stopped to exclaim, “Talking about heat, it’s burning [hot] out,” while trying to wipe his long black hair off his sweaty forehead, holding up a canvas sign decorated with felt and pom poms and emblazoned with the words “It’s not the end of the world. It’s the end of us.” Fittingly, the day was seasonably warm. 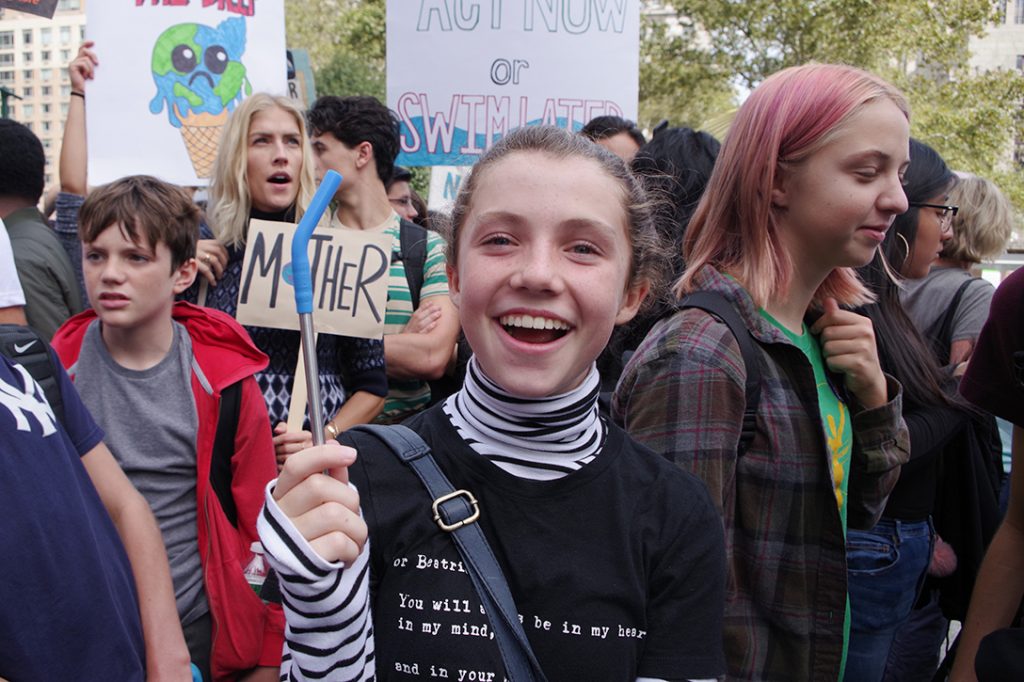 Wielding their reusable straws, tote bags, and placards, 250,000 school children and their adult allies converged in force on Foley Square in lower Manhattan on Friday. Worried that their future is being snatched from under them and angry at grown-ups for their climate change inaction and denial, the students demanded the end of the fossil fuel era and a pivot to an environmentally just future.

Their message was echoed at similar protests around the world — just days before the UN Climate Summit, where world leaders will discuss what actions they are ready to take to keep temperatures from spiraling out of control. 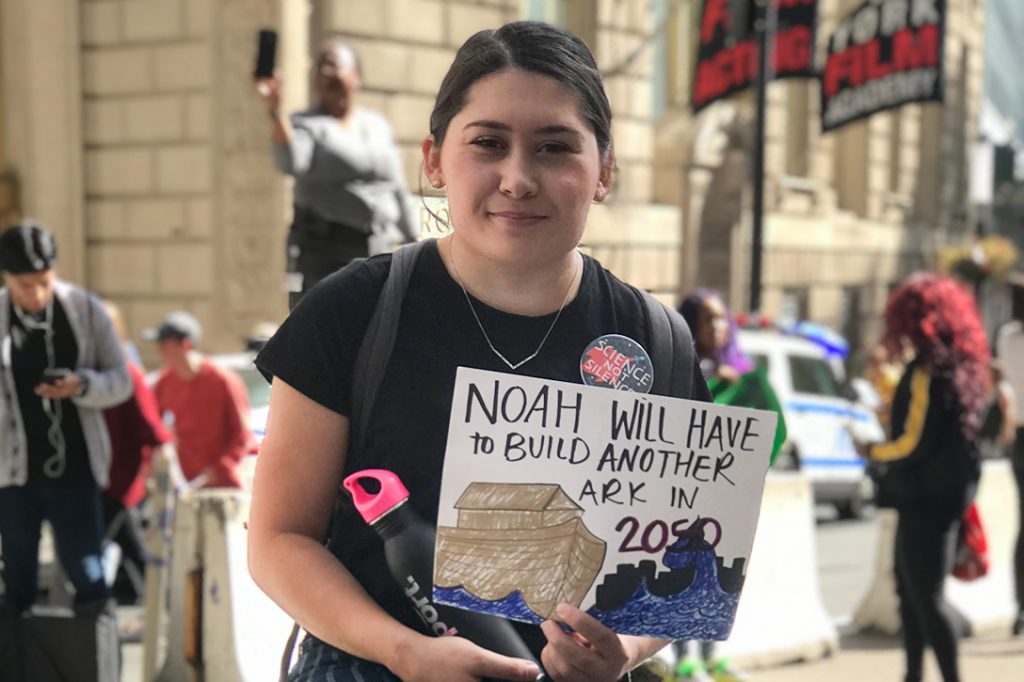 In sweaty throngs, the students proudly hoisted up their posters, some on huge hard stock adorned with glitter, paint and the like, others on pieces of looseleaf paper taped together.

“Noah will have to build another ark in 2050,” one poster said. “If global warming continues, the world will be fine, there just won’t be any people,” said another. 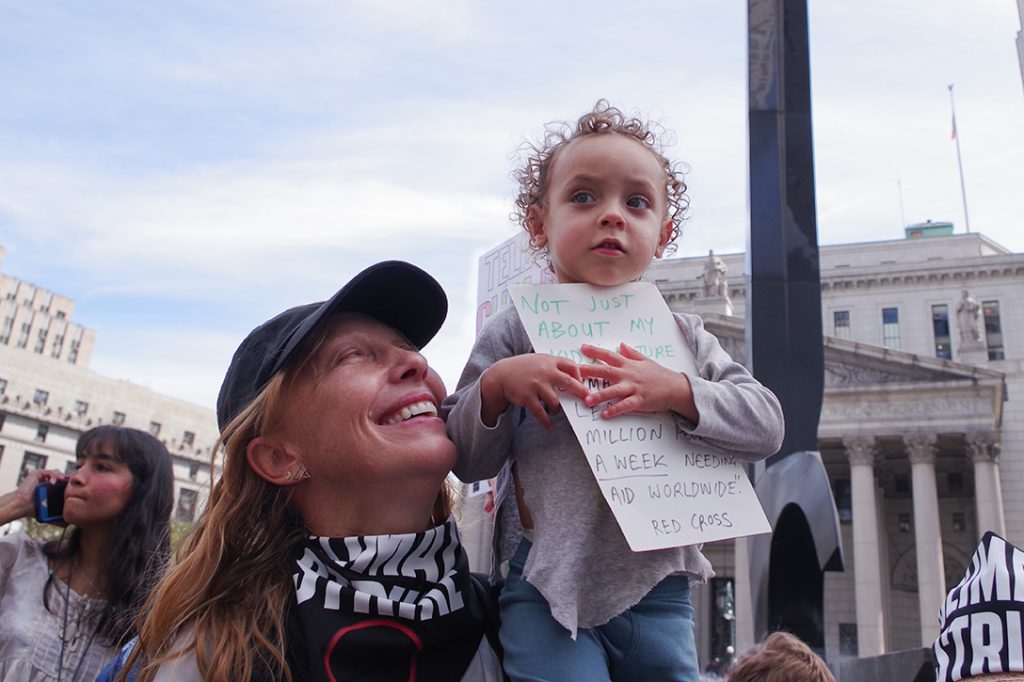 Many children carried posters with pictures and quotes from Dr. Seuss’s famous book, The Lorax, including two-year-old Zoe, who switched from holding up her poster, to scribbling on it with a green marker her mother had given her to play with. 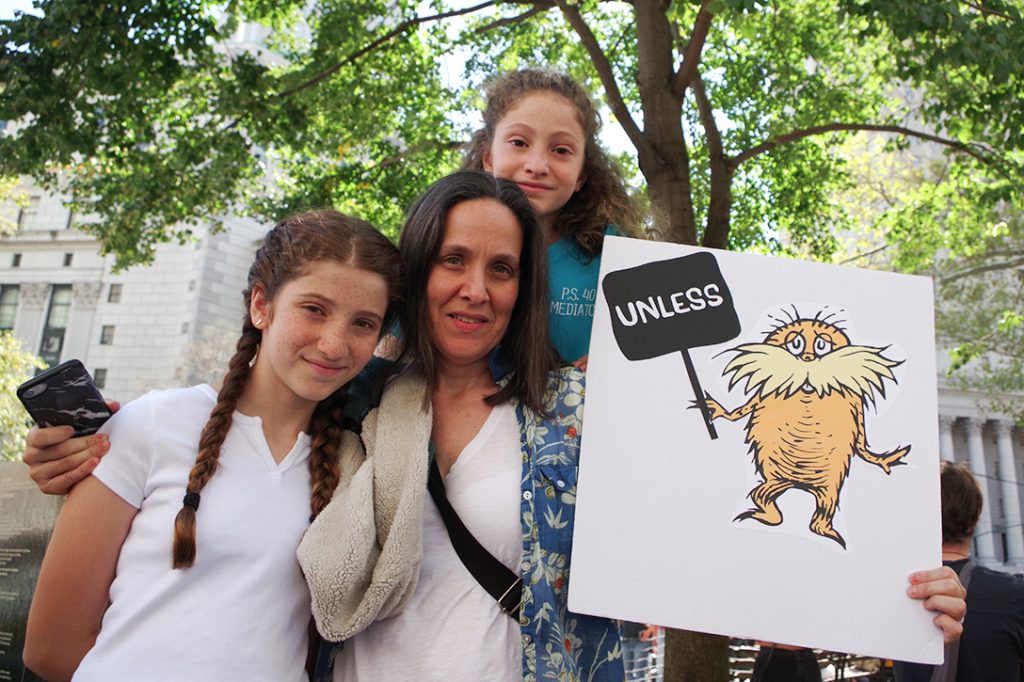 A family of climate strikers pose with their poster of The Lorax. Photo credit: Lana Cohen / WhoWhatWhy

The resounding cry at the march was clear: kids have the power to make a difference for the environment.

“Grown-ups told us to go to school and prepare to be leaders.” said Mirabelle, 11, from Great Barrington, MA. “But we can be leaders now.” 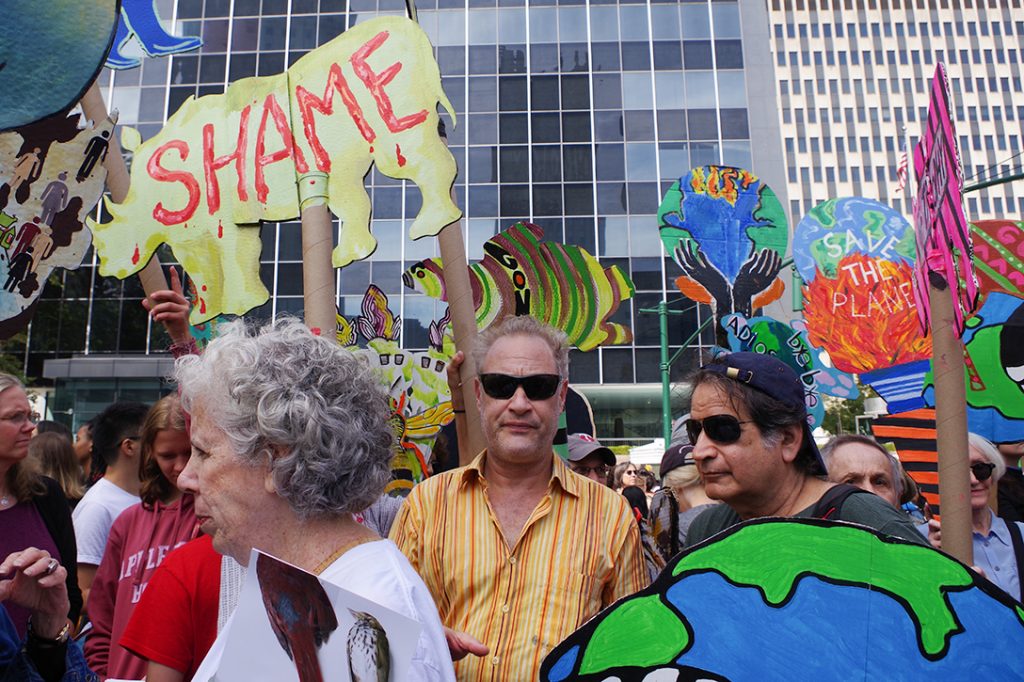 They feel their leadership is not only possible, but necessary. “We’re not here for fun,” said Leila, 17, from Brooklyn’s Williamsburg section. “This is our duty if we want a future.” Kids of all different ages had similar sentiments.

For Emma, 14, from Long Island, NY, it was the Amazon burning that inspired her to get out and protest. 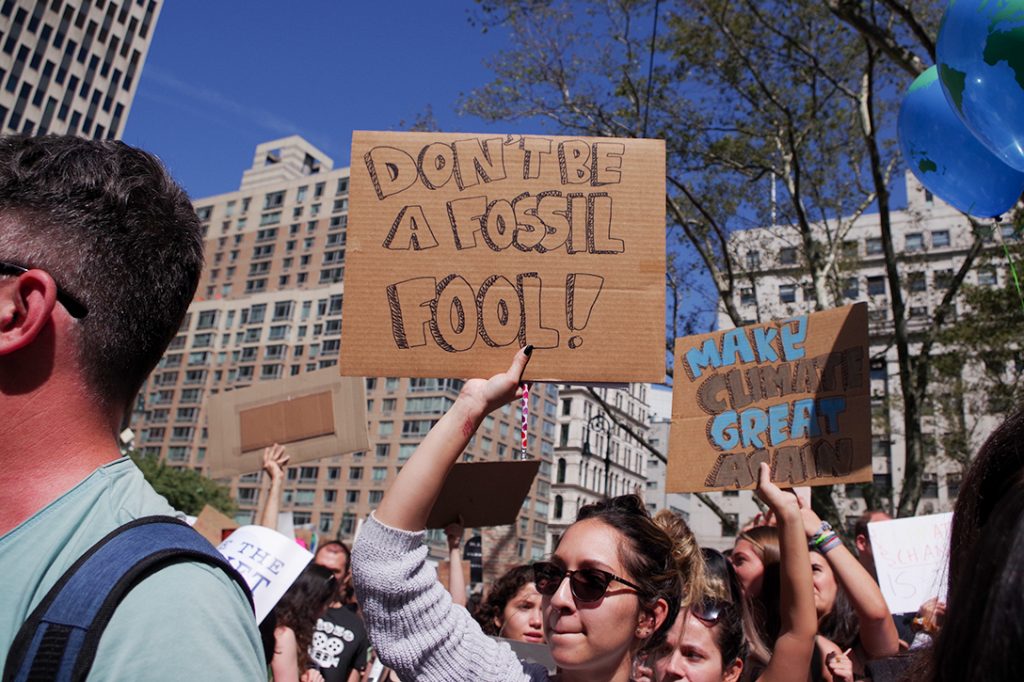 “You can believe in something, but if you really care you should do something, no matter how old you are,” she told WhoWhatWhy.

This was Emma’s first climate protest and she was thrilled to be taking part. Others had been around the block once or twice before. Eleven-year-old Rafael from Queens, NY, attended her first climate march when she was eight years old, and enthusiastically talked about the zero-waste challenge she is taking part in. 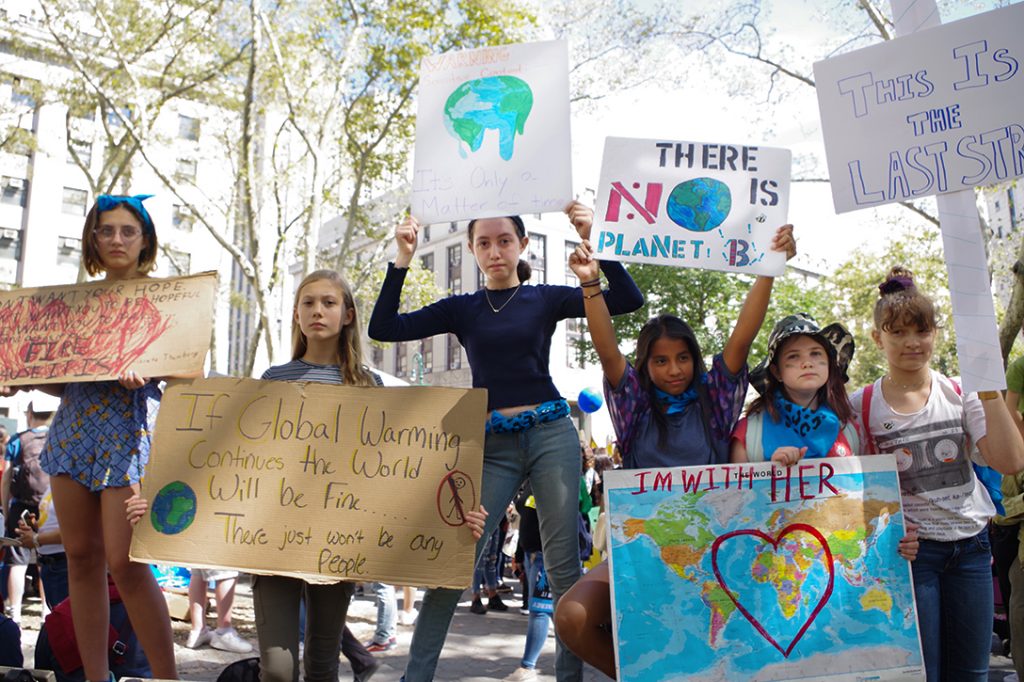 “We can’t vote, we can’t do much, but we can do this.” she said fiercely. This was Rafael’s fifth Fridays for Future strike. When seven-year-old Mila from Fort Greene in Brooklyn was told that the whole event was run by kids, her eyes lit up and her mind jumped to action.

“If this walk doesn’t work, I’ll make another walk,” she said matter-of-factly, before reaching for a whole red pepper and taking a bite smack out of the center. 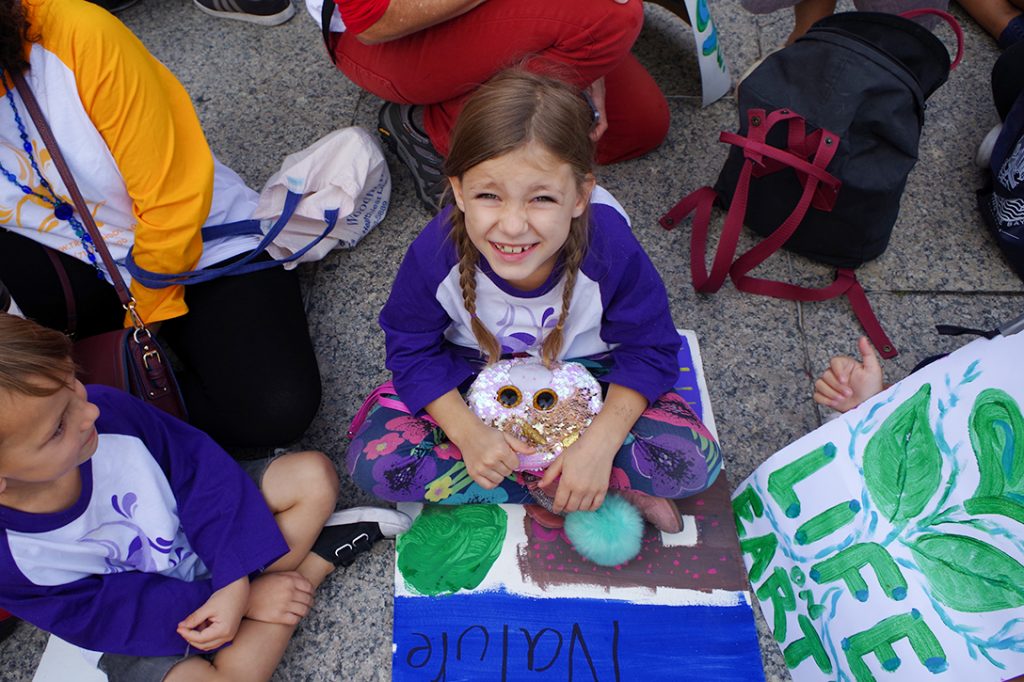 Some adults had mixed feelings about the protest being organized by kids — because it was an indictment of their generation’s inaction.

“I’m embarrassed about this being a youth movement,” said Kirsty Smith, from England. “It shouldn’t take our kids to tell us what is happening and what the world needs. It’s great, but it shouldn’t have to be this way.” 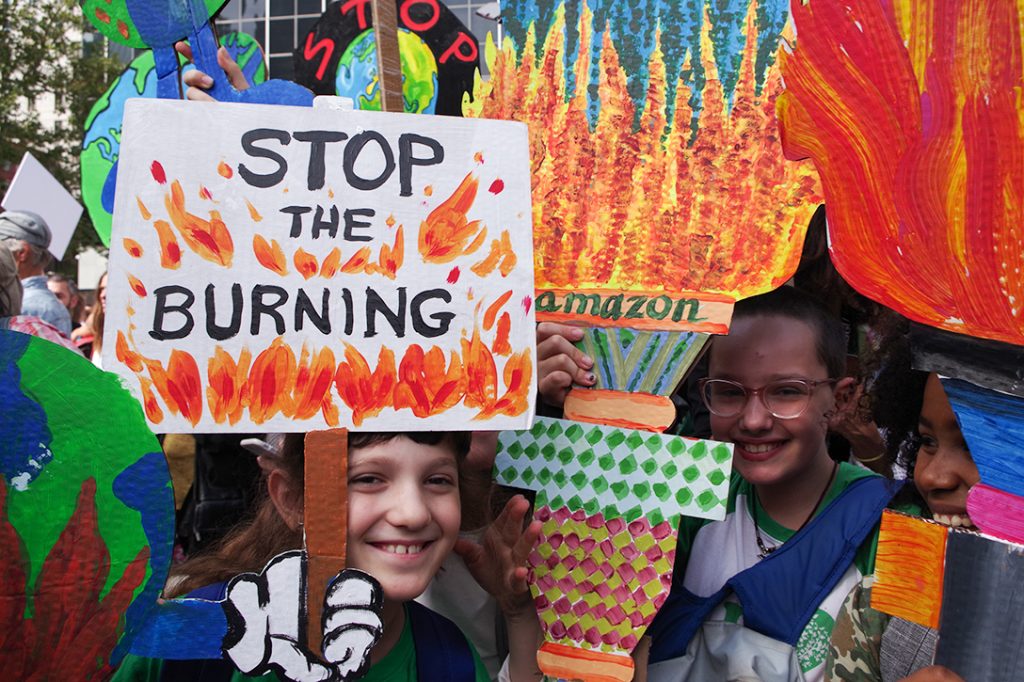 Other adults felt this was the responsibility of the younger generation. “We were here in the 60s for Vietnam and we’re here now,” said Karen Bell, from the artists’ collective We Make America. “But it’s about time it’s a youth-led movement. It’s their world now.”

The four million strikers around the world who came out in the past 24 hours, organized by 16-year-old Greta Thunberg and her student-led “Fridays for Future” campaign, proved this point. They are confident, empowered, coordinated, and large in numbers.

Over the course of the strike, many students passionately pointed out that soon they will be voting and referenced a popular Thunberg quote: “Change is coming whether you like it or not.”