When he was running for Kansas governor, conservative firebrand Kris Kobach was making some money on the side in Nebraska. And he even took his job a step further — by reporting local residents to Immigration and Customs Enforcement (ICE).

Kobach had been on the payroll of the city of Fremont, NE, to help them draft an ordinance to ban landlords from renting apartments to undocumented aliens.

He not only found a way to help the city block undocumented immigrants from renting homes there, but went a step further and asked ICE to investigate anyone who filed an application for housing, according to recently published emails. Kobach even suggested the city form a long-term partnership with ICE so the federal agency could monitor future housing applicants.

Kobach previously served as the vice chair of President Donald Trump’s now-defunct Advisory Commission on Election Integrity, appointed in May 2017 after the president claimed, with zero evidence, that up to 5 million people had fraudulently voted in the 2016 presidential election. The commission’s goal was to find ways to “improve” the electoral system.

Kobach, who lost his race for Kansas governor in 2018 and now wants to replace retiring GOP Sen. Pat Roberts, was eager to find out how many of those housing applicants were in this country illegally. And while Kobach is known for his hard-line views on immigration, this was about more than just setting policy. At the time he sent the emails to ICE in 2017, Kobach was receiving a $10,000-a-year retainer from the city of Fremont in eastern Nebraska to help municipal leaders draft their no-illegals-need-apply ordinance, the Kansas City Star reported.

ICE didn’t take any action on his request to investigate the city’s housing applicants, but Kobach’s emails with that agency’s acting director paint a picture of an ambitious conservative using the Trump administration’s anti-immigrant and family separation policies to advance his political future.

The emails got released courtesy of a government watchdog group that had requested his communications with ICE.

“We filed the request for a number of different documents, and then the government released those emails to us,” said Clark Pettig, the communications director for American Oversight, a nonpartisan ethics watchdog agency based in Washington, DC. 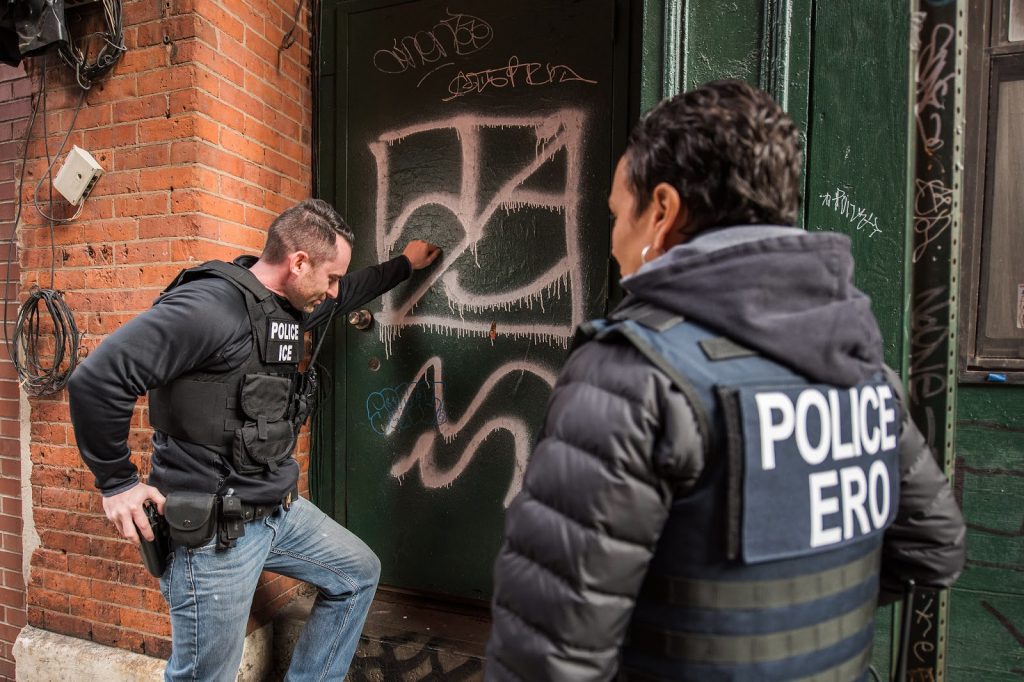 It was Kobach’s work as a consultant in 2010 for the city of Fremont, NE, that became the focus of those emails. He had helped draft an ordinance that prohibited local landlords from renting homes to illegal immigrants, with the ordinance requiring renters to check off if they were citizens or noncitizens. Kobach decided to go a step further and ask ICE to investigate the immigration status of everyone who requested an application for housing there. Those emails became part of American Oversight’s Freedom of Information requests with the government.

“In June 2018, we filed a number of FOIAs with DHS [the Department of Homeland Security] and other agencies investigating the development and implementation of the Trump administration’s family separation policy, and one of those requests sought copies of emails between DHS officials and anti-immigration activists including Kris Kobach,” Pettig told WhoWhatWhy. “DHS produced these emails in response to that request.”

And their next step was to make those documents available on American Oversight’s website.

“We post the documents obtained from FOIA on our website for journalists, investigators, and the public to use — and that’s what we did with these,” Pettig noted.

Last December, American Oversight filed multiple lawsuits over the development and implementation of the Trump administration’s policy of separating immigrant children from their parents. The watchdog group started further investigating the administration’s family separation policies after ProPublica reported in late November that families were still being separated at the border.

American Oversight wanted government records to see if any would shed light on conditions within the detention facilities, the amount being spent to carry out those policies, and the government’s response to complaints of physical or emotional abuse.

When the lawsuits were filed, Austin Evers, executive director of American Oversight, noted that “the administration’s attempts to shift the blame and obscure the details of its barbaric family separation policy won’t stop the truth from coming out.”

Four agencies were targeted, seeking agency officials’ direct communications with Congress and with anti-immigrant groups like the Federation for American Immigration Reform and the Center for Immigration Studies. They also asked for communications with Kobach, who is best known for his time as Kansas’s secretary of state. In that role he devised many voter suppression schemes still used across the country. 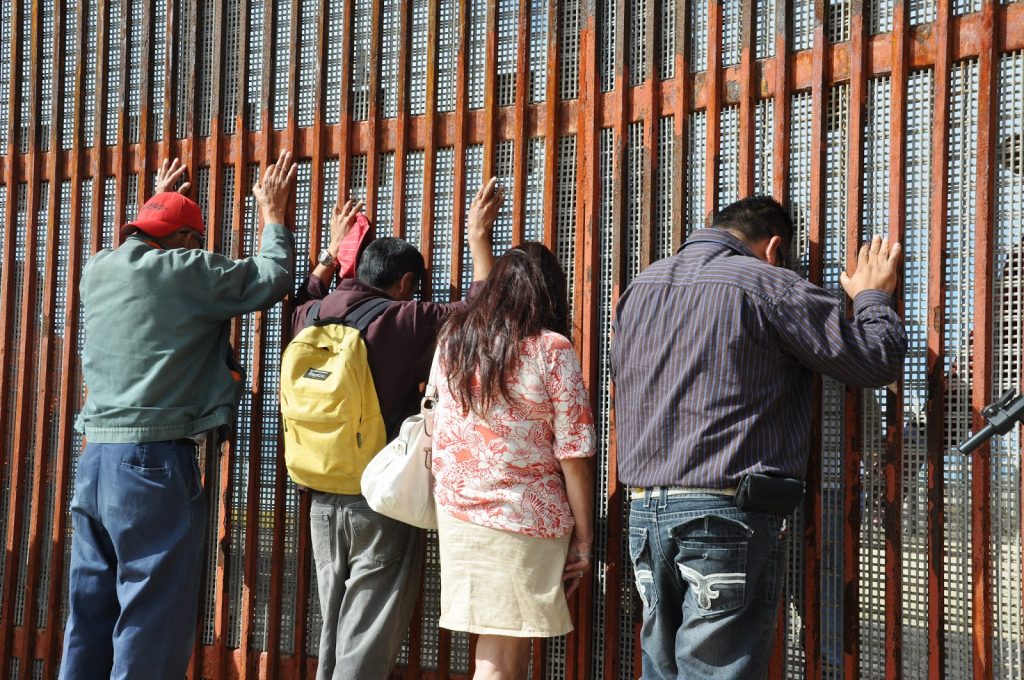 Migrants detained at the US border. Photo credit: Families at Friendship Park / Flickr

“The family-separation policy was implemented by a sprawling federal bureaucracy, which means there’s going to be a paper trail every step of the way — and we intend to expose the facts for the American people to see,” Evers noted in a news release from December 2018 when the lawsuits were filed.

When the Department of Homeland Security complied with the requests, it was revealed that Kobach emailed ICE’s acting director Thomas Homan in 2017. Kobach provided him with a list of 289 people who had applied for housing in Fremont, to see if anyone on that list was in the country illegally. Kobach had wanted ICE to verify the immigration status of each one.

The emails from Kobach had the subject headings “Fremont, NE, aliens to be checked,” and Kobach identified himself as a legal representative of the Fremont Police Department.

Kobach also indicated that he wanted future collaborations between ICE and the Fremont police, writing, “After this first large batch of 289, we would anticipate that the City might send a smaller number (50 or so) to be verified every 6 months or so, depending on what you advise.”

Kobach also noted that the ordinance in Fremont “permits the city to share any information on the alien’s application with ICE for ICE’s own purposes. So if your agents want to use that information for ICE enforcement operations, the ordinance contemplates that.”

Fremont is a city in eastern Nebraska with a population of about 26,400. About 2,500 residents are estimated to be Hispanic.

Kobach posted on Twitter that this story was “fake news” and that a news article about it in the Kansas City Star was “drawing completely incorrect conclusions from it.”

The Twitter post read, “I gave KCMO’s @PeteMundo the rest of the story this morning. We talked about the KC daily paper taking an email exchange and drawing completely incorrect conclusions from it. #FakeNews.”

The Kobach Senate campaign has not responded to WhoWhatWhy’s request for comment.

Kobach has faced numerous ethics complaints in the past. In November 2017, Citizens For Responsibility and Ethics in Washington filed an ethics complaint against him, noting that Kobach violated federal conflict of interest laws when he was Kansas Secretary of State, because he was also serving as vice chair of the Presidential Advisory Commission on Election Integrity. At the time, Kobach agreed to be paid for writing articles for Breitbart News, and wrote one in his official capacity with the commission that alleged serious voter fraud in New Hampshire. These claims have been found to be baseless.

I gave KCMO's @PeteMundo the rest of the story this morning. We talked about the KC daily paper taking an email exchange and drawing completely incorrect conclusions from it. #FakeNews #ksleg #kssen https://t.co/cHZykvOXqM

In April 2018, a US District judge declared Kobach in contempt for refusing to comply with her orders in a lawsuit brought by the American Civil Liberties Union. The ACLU had challenged a Kansas law requiring proof of citizenship when registering to vote. Judge Julie Robinson also instructed Kobach to pay attorney fees for declining to follow her order blocking enforcement of the citizenship law.

Then, in March, Common Cause filed complaints with the Department of Justice and the Federal Election Commission against solicitations for campaign contributions made on behalf of Kobach’s Senate campaign by We Build the Wall, Inc. Common Cause claimed the email solicitation violated the ban on corporate contributions to a federal candidate and the prohibition on candidates spending “soft money” in connection with their election.

As Kansas’s secretary of state, he worked to convince the Kansas legislature to pass what is arguably the nation’s strictest “voter fraud” law. It mandated that people provide information to show they’re American citizens before registering to vote. The statute was aimed at preventing noncitizens in Kansas from voting in state elections.

Although the voter ID law was on the books between 2013 and 2016, it was later overturned by the courts. At the 10th Circuit Court of Appeals in Salt Lake City, Judge Jerome Holmes said the law unlawfully blocked more than 30,000 people from registering to vote, even though they were all citizens.

Kobach also helped draft a 2010 law in Arizona that required state and local law enforcement officials to check the immigration status of drivers they had stopped if they had “reasonable suspicion” to believe they were in the country illegally.

In 2016, as part of a settlement with the National Immigration Law Center and other immigrants’ rights groups that had sued to block its enforcement, Arizona ended this practice.