The connection between being a convicted criminal and having a fixation on fashion might be perplexing to some, but not to me. As a longtime fashion editor and fashion follower, I get it. Having a closet filled with great clothes is empowering and it can impart a feeling of confidence, even if it’s just an illusion. As renowned costume designer Edith Head once said: “Confidence can’t be bought, but an outfit that exudes it can.”

Many of the world’s most infamous criminals not only take their fashion seriously, they have heeded the advice of fashion’s most revered names (and other sage figures). But, of course, they are doing it in their own criminal way.

The legendary New York Times street photographer Bill Cunningham once remarked, “Fashion is the armor to survive the reality of everyday life.”

I can assure you, he was not referring to bulletproof clothes. He was talking about clothing that telegraphs who we are to the world. Like it or not, we are all judged by our appearances and nothing speaks more loudly than the clothes we choose.

Mark Twain said: “Clothes make the man. Naked people have little or no influence on society.” That appears to be the mantra for many of the most notorious criminals in history. For them, image is everything, and sparing no expense to maintain it is their prerogative. Dressing to convey authority and legitimacy, command respect, and invoke fear is an obligation. Every villain needs a good look.

Some of the most infamous criminals became known not only for dealing in narcotics, tax evasion, perjury, bribery, robbery, embezzlement, extortion, and murder — but for the way they dressed. But that doesn’t mean fashion crimes have not been committed.

Take Paul Manafort. He used millions in unreported income from his lucrative foreign consulting business to pay for his lavish lifestyle, spending over $1.25 million on his wardrobe (he has a penchant for custom-made Italian suits and exotic skins). And whether he serves out his 7.5-year sentence or not, he will get to keep the obscenely extravagant clothing that was used against him in his trial. Including the $15,000 silk-lined ostrich jacket, the $8,500 python-skin bomber, and $9,500 ostrich vest. 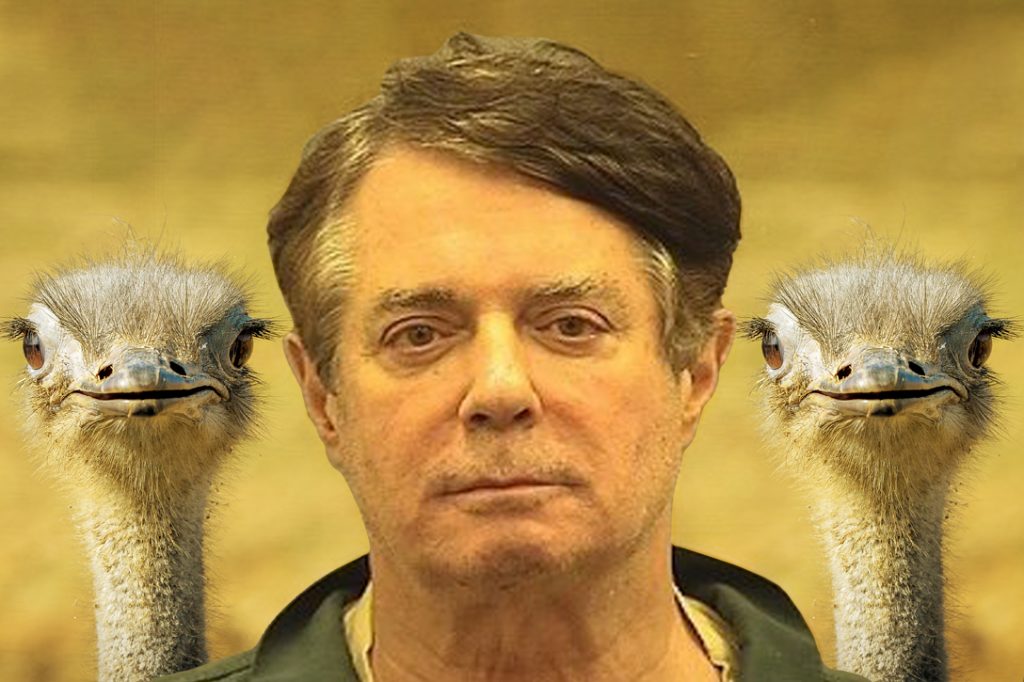 They are not only hideous; they are the epitome of bad taste. Why did he buy them? Because he could! The fact that he could afford to purchase these and other high-end items from the House of Bijan, which bills itself as “the most expensive store in the world” (ties run $1,000 apiece) meant the world to him. They were part of his “shtick.” I guess he illustrates an observation by Elsa Schiaparelli (one of the most prominent figures in fashion between the two World Wars): “In difficult times, fashion is always outrageous.”

Then again, former Vogue editor-in-chief Diana Vreeland famously remarked: “A little bad taste is like a nice splash of paprika. We all need a splash of bad taste — it’s hearty, it’s healthy, it’s physical. I think we could use more of it. No taste is what I’m against.”

Criminals may have different modus operandi, but what they have in common, in addition to being lawbreakers, is that they are egotists, narcissists, addictive personalities, and are obsessed with projecting an image of wealth, power, and authority (and instilling fear) through their sartorial choices.

They concur with Academy Award–winning designer Edith Head’s assessment that “You can have anything in life if you dress for it,” because this is a group that apparently feels very entitled. They don’t care who they hurt and what they have to do, in order to get what they want.

In truth,some of the greatest gangsters throughout history dressed to stand out and be noticed rather than to go undetected. In the words of Cristobal Balenciaga (one of the most influential couturiers of the 20th century): “Elegance is elimination.” Of course, he was talking about simplifying and paring down one’s wardrobe, not eliminating all one’s enemies Michael Corleone–style.

Among those who routinely “killed it” with great style is John Dillinger, whose outward visage projected plenty of attitude. His sharp appearance announced that he couldn’t give a damn. (This September, the body in his tomb will be exhumed because relatives believe they have reason to doubt its identify. The important question is, will he, whoever he is, be wearing something “to die for?”)

Jesse James was known for his perfect haircuts, his neat white collars, and spiffy black ribbon tie. Bugsy Siegel was renowned as a natty dresser and was glamorized in the movie Bugsy, starring Warren Beatty. Al Capone always wore a shirt, tie, and massive, luxurious coat. He dressed like he was the most important person in the room.

During the Great Depression, Clyde Barrow, who went on a murderous crime spree, favored suits with wide lapels and fervently patterned ties. His partner in crime (literally), the beautiful Bonnie Parker, was an equally sharp dresser. Her penchant for wearing berets, neck scarves, trumpet skirts, and knitwear has had a wide influence on fashion. The duo was always so well turned out and made such a striking couple, they were romanticized in the movie Bonnie and Clyde. 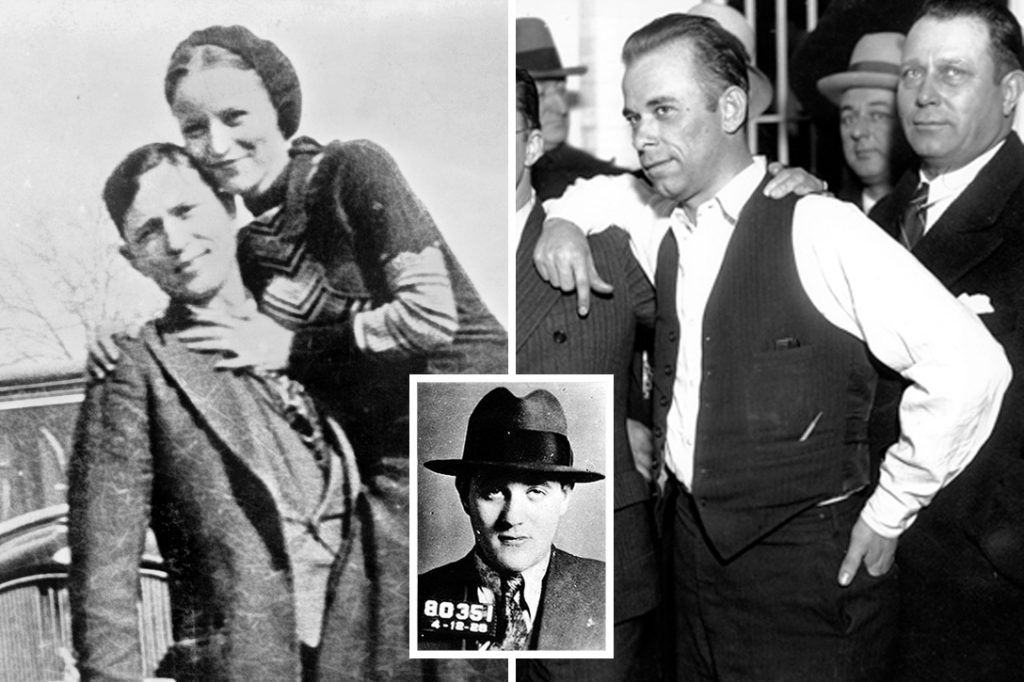 The famed hitman Crazy Joe Gallo was a psychotic schizophrenic — but, man, was he ever an exceedingly stylish dresser! Gallo was known for his “charismatic beatnik” look, which comprised black suits with skinny ties and sunglasses worn in court. It was memorable enough to inspire Bob Dylan’s ballad “Joey” and it caught the eye of the fashion bible, Women’s Wear Daily, which photographed him several times. Gallo was also the inspiration for Harvey Keitel’s wardrobe in Quentin Tarantino’s movie Reservoir Dogs.

One of the most notorious gangsters in the modern era was John Gotti. Known as “The Dapper Don” and “America’s Best Dressed Gangster,” he was always immaculately turned out in life — and even in death; when he was laid to rest in 2002 he was wearing an impeccable double-breasted black pinstripe suit. Some of his suits are on display at The Mob Museum in downtown Las Vegas (www.themobmuseum.org).

Speaking of museums, 3,000 pairs of Imelda Marcos’s shoes, which were seized from Manila’s Malacañang Palace in 1986, are currently housed in the Marikina Shoe Museum. Marcos became famous as first lady to dictator and former Philippines president Ferdinand Marcos, whose reign was known for money laundering and human rights abuses. She might not have treated her subjects well, but she doted on her thousands of pairs of shoes, which were kept in meticulous condition in her palace. “They went through my closets looking for skeletons but all they found were shoes,” Marcos commented at the time.

It appears Imelda is in complete agreement with Christian Dior and Christian Louboutin. Dior once remarked, “You can never take too much care over the choice of your shoes. Too many women think that they are unimportant, but the real proof of an elegant woman is what is on her feet.” Louboutin opined, “Shoes transform your body language and attitude. They lift you physically and emotionally.”

And Marcos obviously listened when Marilyn Monroe offered her advice: “Give a girl the right shoes and she can conquer the world.”

Leona Helmsley, the tyrannical hotel tycoon, famously commented, “Only the little people pay taxes.” Known as the Queen of Mean, she was convicted of federal income tax evasion and other crimes in 1989. Leona was famous for her flamboyant personality and an equally flamboyant lifestyle that included palatial homes and an impeccable wardrobe. For her court appearances, the billionaire pulled out all the stops, often wearing Chanel from head to toe.

In March 2004, Martha Stewart was found guilty of, among other things, felony charges of conspiracy, and making false statements to federal investigators. And she was sentenced to a five-month term in a federal correctional facility. The domestic diva and former model’s trial was highly publicized and her wardrobe was scrutinized and criticized. She is a very wealthy woman who favors custom-made clothes by American couturier Ralph Rucci and bags by Goyard and Hermes, and she didn’t do anything to dispel that image when it came to her court wardrobe.  She really grabbed the headlines when she showed up wearing an uncharacteristically sexy short skirt and booties. It prompted celebrity stylist Robert Verdi to ask, “Who did she check with, Snooki [from The Jersey Shore]?”

By the way, Martha’s incarceration helped revitalize a fashion trend. A fellow prisoner hand-crocheted a poncho for Stewart as a “going away” present upon her release. She wore it on the plane ride home, photos appeared everywhere, and yarn companies and pattern designers immediately jumped on the” Martha Stewart Poncho” bandwagon.

Roger Stone — the veteran Republican strategist, political lobbyist, and Trump confidante — loves to grab the limelight and fancies himself as a fashion peacock.

Before appearing for his arraignment earlier this year (he pleaded not guilty to charges of false statements, witness tampering, and obstruction of justice brought by special counsel Robert Mueller), he made a video for the Daily Caller (where he once served as men’s fashion correspondent), on the correct way to dress for court in order to convey an image of power and innocence.

He explained why he opted for a single-breasted suit rather than one of his usual custom-made double-breasted versions: he didn’t want to look too rich. It would also facilitate the Richard Nixon–style “victory” gesture, which he has been known to make. Stone is such a Nixon aficionado, he has a tattoo of the former president on his back.

Last year, Cardi B, the 26-year-old award-winning rapper, was charged with assault and reckless endangerment in connection with an altercation at a New York strip club. Her onstage ensembles often leave nothing to the imagination, but for her court appearances, she dressed in rather elegant, couture-like ensembles (priced well into the four and five figures), and always accessorized with one of her many Hermes bags. She explained these outfits make her feel powerful. (The one thing she refused to tone down was her manicure, because, hey, she is Cardi B after all!)  Her uncharacteristically classy wardrobe announced, “It’s a crime NOT to look good at all times, especially in court!”

What a defendant wears to court not only impacts on how a judge and jury receive the case but on the court of public opinion. Unsurprisingly, this has taken on a life of its own. As Harry Winston observed, “People will stare. Make it worth their while.”

Marilyn Kirschner is a longtime fashion editor. She was the senior market editor at Harper’s Bazaar for 21 years, and is currently editor-in-chief of Lookonline.