With the subpoena of Donald Trump Jr., the infamous Trump Tower meeting with Russians who promised to supply dirt on Democratic presidential candidate Hillary Clinton is in the spotlight once again.

The oldest son of US President Donald Trump took the meeting even though accepting something of value from a foreign country under such circumstances is a crime. The only reason special counsel Robert Mueller did not conclude that this constituted collusion with the Russians is that they ended up not delivering — at least not then and there. Mueller did find that the Russians were responsible for hacking and leaking emails from the DNC and Clinton’s campaign as well as financing a social media campaign on behalf of Trump.

The Trump Tower meeting was not the only time the campaign illegally thought to solicit help from foreigners.

WhoWhatWhy showed in 2016 (see below) that the GOP nominee had brazenly defied campaign finance laws by asking for donations from foreigners. It is illegal for non-Americans to give money to political campaigns.

Our investigation, which originally ran on July 15, 2016, ultimately led to transparency watchdog groups asking the Department of Justice to investigate the Trump campaign for this apparent and egregious violation. 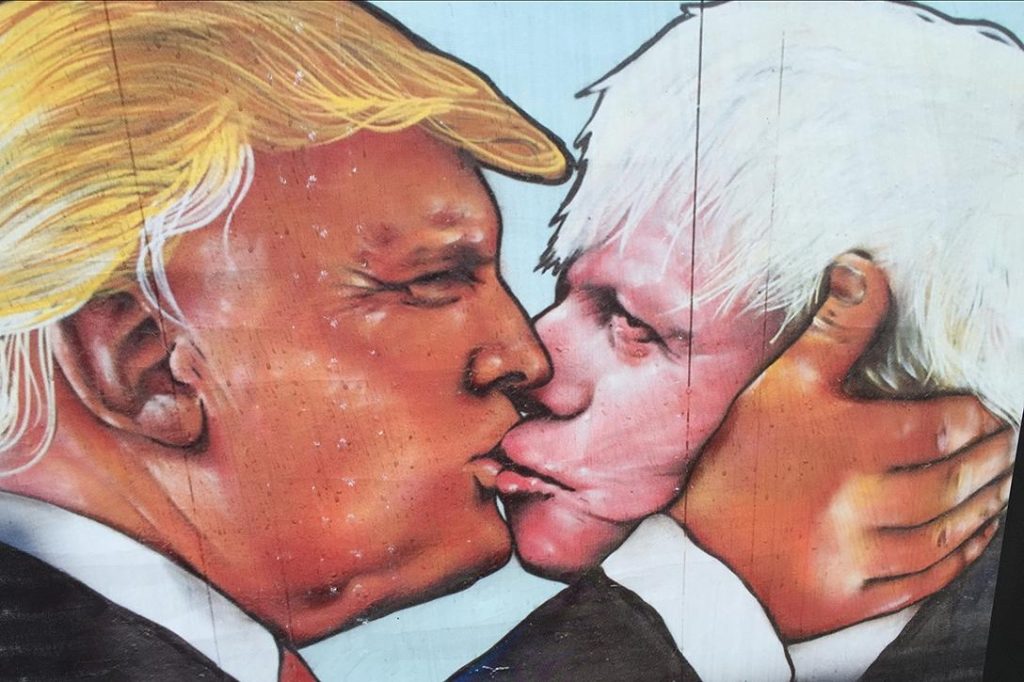 Is the Trump campaign embracing contributions from foreigners?

A WhoWhatWhy investigation has found that Donald Trump continues to solicit donations from foreigners in defiance of US law — two weeks after he was publicly called out for this.

Specifically, the campaign sent fundraising emails to non-Americans in several foreign countries, including Australian, Scottish, and Icelandic lawmakers. The complaint received considerable media attention, most notably from the Washington Post.

While the campaign of a presidential candidate should be expected to know the law and vet its email lists, Trump could conceivably have gotten away with the claim that contacting foreign lawmakers was an honest mistake. In that case, the FEC might merely deem the behavior to be “reckless.” However, if the campaign was aware of the violation, then it acted illegally.

“Nothing makes it legal to solicit funds from a foreign national simply because the solicitation was inadvertent,” Bradley Smith, professor of law at Capital University Law School, told WhoWhatWhy. “However, violations of the Federal Election Campaign Act are criminal only if the solicitation was knowing.”

A WhoWhatWhy investigation has shown that appears to be the case here.

The FEC must inform the campaign of a complaint within five business days. That means that Trump’s team knew no later than July 7 that it had improperly solicited funds from non-Americans.

However, WhoWhatWhy has found that it continued to send fundraising emails to foreigners as recently as July 12.

WhoWhatWhy has been in contact with five foreign lawmakers, who have received at least seven different solicitations for contributions since the complaint was filed.

“If they continue to do it after being informed, that would be an even more egregious violation,” Brendan Fischer, associate counsel at the Campaign Legal Center, told WhoWhatWhy. He noted that continued solicitations are further evidence of the Trump campaign’s recklessness and raises the likelihood that it knowingly violated the law.

Fischer added that the information uncovered by WhoWhatWhy could lead the group to take further action.

In fact, it is very likely that the campaign was aware even prior to July 7 that it was violating the law. It certainly should have been.

In addition to the media coverage that the complaint received, Sir Peter Bottomley, one of the British lawmakers the Trump campaign asked for money, responded to a solicitation in June.

“I replied to ask whether it is proper to solicit a donation from a person who is not a US voter, not a US resident, not a US taxpayer and who is a legislator in another jurisdiction,” Bottomley wrote in an email shared with WhoWhatWhy.

The campaign has not responded to his concerns, nor to our requests for information.

“Burying your head in the sand is not a defense — to not know about these scandals as they unfold would represent a total failure of due diligence on behalf of the Trump campaign,” Timothy Kuhner, associate professor of law at Georgia State University College of Law, told WhoWhatWhy. 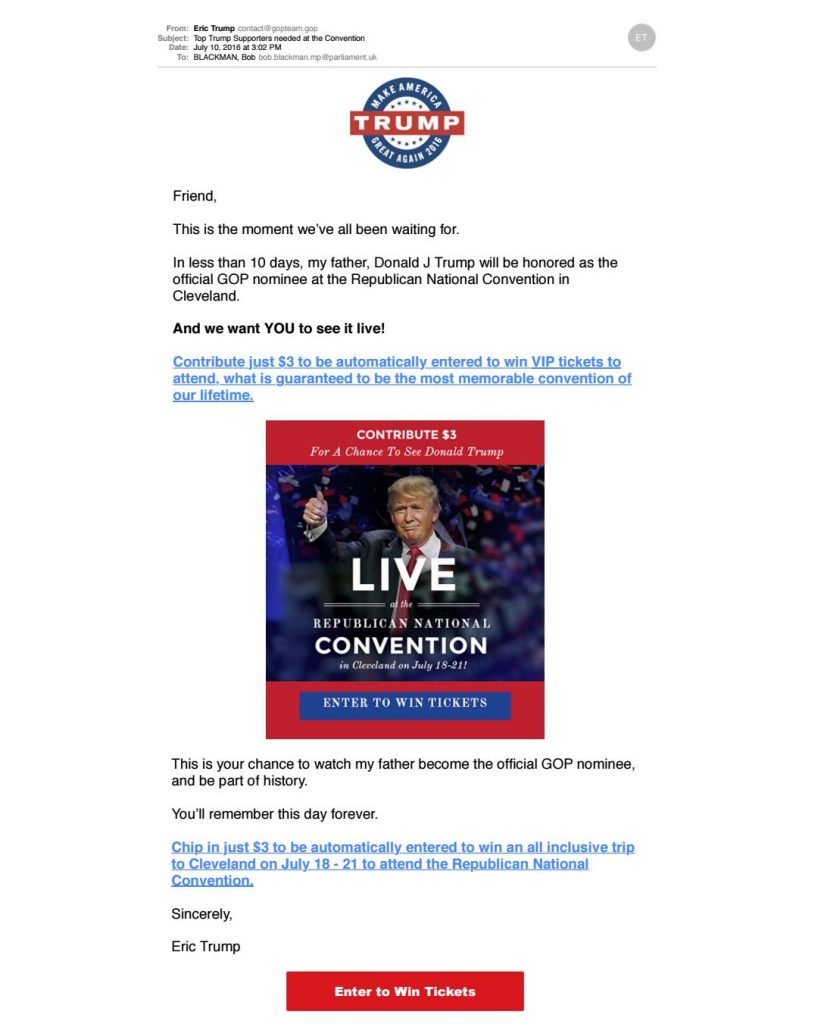 Here are some examples of fundraising emails the Trump campaign has sent to non-Americans living abroad since July 7:

July 7 email from Brad Parscale, Digital Director for Trump’s campaign, to Gai Brodtmann, an MP in Australia, and Kirsty Blackman, an MP in the UK: “Every dollar that comes through the doors will be yet another nail in the coffin for Crooked Hillary’s campaign and ensure she never sees the inside of the White House ever again.”

July 11 email from Donald J. Trump Jr. to Peter Bottomley, an MP in the UK: “Peter — the clock is ticking. Contribute $3 now to be automatically entered to win a VIP trip to the Republican National Convention.”