Peter Dale Scott is considered the father of “Deep Politics” — the study of hidden permanent institutions and interests whose influence on the political realm transcends the elected, appointed, and career officials who come and go.

A professor of English at Berkeley and a former Canadian diplomat, he is the author of several critically acclaimed books on the pivotal events of our country’s recent past, including American War Machine (2010) and The American Deep State (2018), which are relevant to the story below.

For two years President Donald Trump and Fox News have been attacking the “deep state” in Washington, usually referring to the intelligence agencies, like FBI and CIA, who have had Trump under investigation. But my notion of the deep state also includes private sources of power, outside government — but able to influence it illicitly — such as the Russian private Bank Alfa.

Bank Alfa was the creation of three Russian oligarchs: Mikhail Fridman, Pyotr Aven, and German Khan. During the 2016 campaign, it drew the attention of the media, as in a story by Eric Lichtblau and Steven Lee Myers, “Investigating Donald Trump, FBI Sees No Clear Link to Russia,” New York Times, October 31, 2016.

In classified sessions in August and September, intelligence officials also briefed congressional leaders on the possibility of financial ties between Russians and people connected to Mr. Trump. They focused particular attention on what cyber experts said appeared to be a mysterious computer back channel between the Trump Organization and the Alfa Bank, which is one of Russia’s biggest banks and whose owners have longstanding ties to Mr. Putin.

FBI officials spent weeks examining computer data showing an odd stream of activity to a Trump Organization server and Alfa Bank. Computer logs obtained by The New York Times show that two servers at Alfa Bank sent more than 2,700 “look-up” messages — a first step for one system’s computers to talk to another — to a Trump-connected server beginning in the spring. But the FBI ultimately concluded that there could be an innocuous explanation, like a marketing email or spam, for the computer contacts.

A more detailed account in the New Yorker — “Was There a Connection Between a Russian Bank and the Trump Campaign?,” by Dexter Filkins — gives additional reasons for suspecting that the Alfa-Trump domain link was important and highly sensitive. Bank Alfa was also discussed in the Steele Dossier.

Alfa Bank itself is in the Mueller report but in an account based only upon the testimony of one of the founding oligarchs, Pyotr Aven — that makes Aven and Alfa look outside any possible conspiracy, not inside.

German Khan (#3 in the Alfa Bank) is not mentioned. His son-in-law Alex van der Zwaan is mentioned, but only in a passive role:

Gates suspected that Kilimnik was a “spy,” a view that he shared with Manafort, Hawker, and Alexander van der Zwaan, 869 an attorney who had worked with DMI [Davis Manafort Inc.] on a report for the Ukrainian Ministry of Foreign Affairs. [Van der Zwaan pleaded guilty in the U.S. District Court for the District of Columbia to making false statements to the Special Counsel’s Office. Plea Agreement, United States v. Alex van der Zwaan, 1:18-cr-31 (D.D.C. Feb. 20, 2018), Doc. 8.]

The fact that Alex is the son-in-law of German Khan, #3 in the Alfa Bank, is not noted. Nor is there any clarification of his false statements mentioned above.

But the media reported that van der Zwaan was the intermediary between Paul Manafort’s former deputy Rick Gates and an individual later identified only as ‘Person A’” (probably Konstantin Kilimnik). 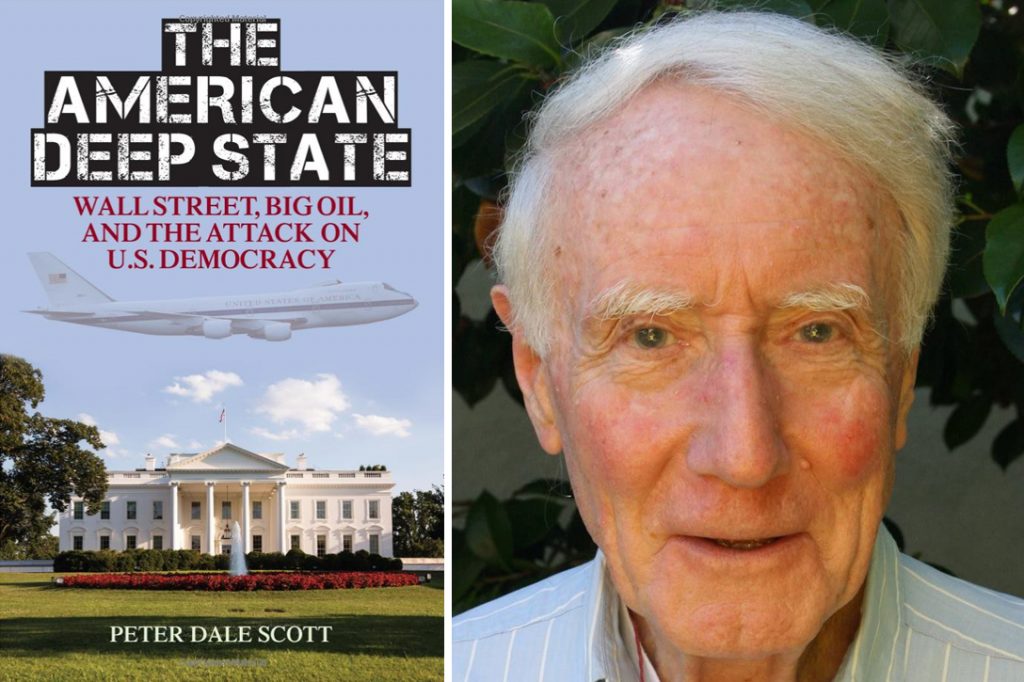 Here is what I had to say about Bank Alfa in the Introduction to the paperback edition of The American Deep State:

Just before the election the New York Times reported that

For much of the summer, the FBI … scrutinized advisers close to Donald J. Trump, looked for financial connections with Russian financial figures, … and even chased a lead — which they ultimately came to doubt — about a possible secret channel of email communication from the Trump Organization to a Russian bank….

FBI officials spent weeks examining computer data showing an odd stream of activity to a Trump Organization server and Alfa Bank. … But the FBI ultimately concluded that there could be an innocuous explanation, like a marketing email or spam, for the computer contacts.

The next day the Jewish paper Forward raised a question, not yet answered, about Alfa Bank’s principal owner, the philanthropist oligarch Mikhail Fridman, listed as #73 on the Forbes list of the world’s billionaires in 2016 (once #20), and the second wealthiest Russian:

Is a Russian Jewish oligarch with Israeli citizenship and close ties to both Vladimir Putin and Benjamin Netanyahu running a secret cyber-communications channel between Donald Trump’s presidential campaign and Russian authorities?

The various speculations about the Trump link to Alfa and Fridman, whether innocuous or shady, justify a closer look at the charges about Alfa’s influence two decades ago. (Scott, American War Machine, 187.)

As the Guardian reported in 2002, Alfa’s 1990s clout in Washington was demonstrated when its oil company, Tyumen,

was loaned $489m in credits by the US Export-Import Bank after lobbying by Halliburton…. The [Clinton] White House and State Department tried to veto the Russian deal. But after intense lobbying by Halliburton the objections were overruled on Capitol Hill [which then was Republican controlled] … The State Department’s concerns were based on the fact that Tyumen was controlled by a holding conglomerate, the Alfa Group, that had been investigated in Russia for mafia connections.

Under the guidance of Richard Cheney, a get-the-government-out-of-my-face conservative, Halliburton Company over the past five years has emerged as a corporate welfare hog, benefiting from at least $3.8 billion in federal contracts and taxpayer-insured loans.

One of these loans was approved in April by the U.S. Export-Import Bank. It guaranteed $489 million in credits to a Russian oil company [Tyumen, owned by Alfa] whose roots are imbedded in a legacy of KGB and Communist Party corruption, as well as drug trafficking and organized crime funds, according to Russian and U.S. sources and documents.

[Two reports, one by “a former U.S. intelligence officer,” and one by the Russian FSB] claim that Alfa Bank, one of Russia’s largest and most profitable, as well as Alfa Eko, a trading company, had been deeply involved in the early 1990s in laundering of Russian and Colombian drug money and in trafficking drugs from the Far East to Europe …

The FSB report, too, claimed that the Alfa Group’s top executives, oligarchs Mikhail Fridman and Pyotr Aven, “allegedly participated in the transit of drugs from Southeast Asia through Russia and into Europe.” (Please go here for full text.)

In 2013 Tyumen Oil was acquired by the Russian oil company Rosneft, which had just signed a multibillion-dollar oil exploration deal with Exxon, allegedly “the biggest oil deal ever.” The deal — put on hold by President Barack Obama’s imposition of sanctions on Russia — was so huge that, according to the Wall Street Journal, its temporary cancellation “put Exxon at risk.” (Daniel Gilbert, “Sanctions Over Ukraine Put Exxon at Risk: Deal With Russia’s Rosneft to Drill in Arctic Is Crucial to Oil Company,” Wall Street Journal, September 11, 2014. The deal was originally made by Rosneft with BP, but the BP deal was blocked by a successful legal challenge from a company controlled by Fridman.) 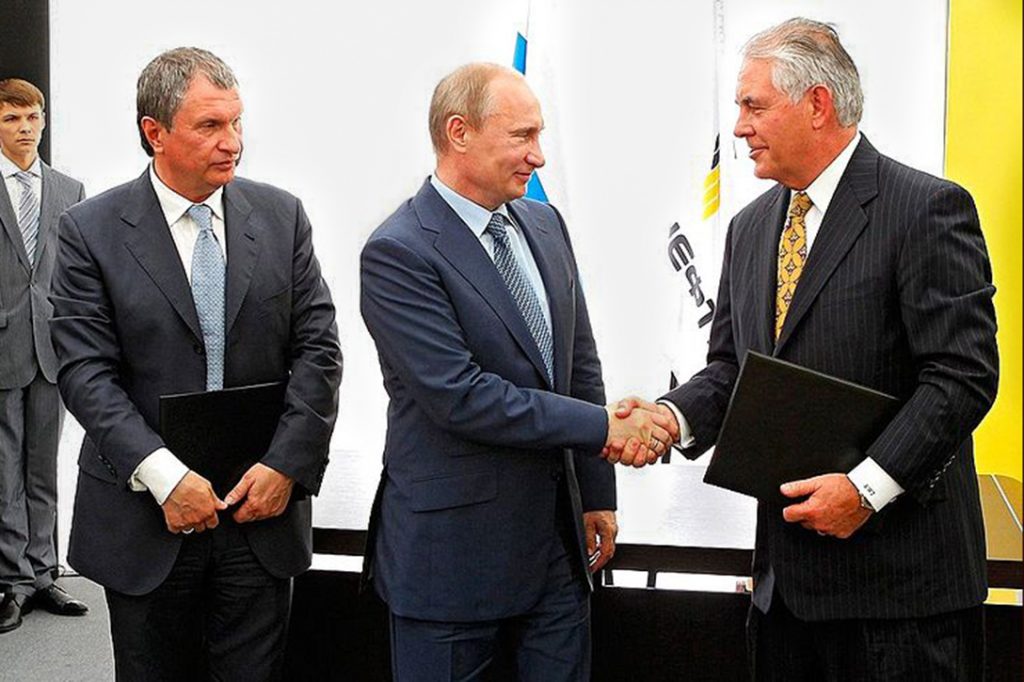 President Vladimir Putin; Igor Sechin, Chairman of the Board of Rosneft (left); and Rex Tillerson, Chairman of ExxonMobil signed an agreement on joint development of petroleum reserves in Western Siberia, June 2012. Photo credit: President of Russia / Wikimedia (CC BY 3.0)

In April 2017, after Exxon’s Chairman, Rex Tillerson, became Trump’s first secretary of state, “Exxon tried to get permission from the Trump administration to resume drilling in Russia. The Treasury Department denied the waiver.” (A year later, Trump fired Tillerson.)

What Mueller did research, he did thoroughly. I suspect that his findings will create problems for Trump and maybe other politicians. But the report’s silence on the Trump-Alfa connection — if not broken by eventual release of counterintelligence information now redacted — is an indication that the bank’s clout in Washington is still as powerful as it was in the 1990s.

Since the election, Trump has also acted in ways that will protect Alfa Bank from criminal investigations. In July 2018, Brian Benczkowski was narrowly confirmed as head of the Justice Department’s Criminal Division, despite Democratic concerns over the fact that he had previously, while a lawyer at Kirkland & Ellis, represented the Alfa Bank in the investigation of whether its computer servers had contacted the Trump Organization. (1)

And William Barr, now attorney general, also worked at Kirkland & Ellis during the Bank Alfa investigation, leading Newsweek to ask a week ago whether he should not now recuse himself from matters affecting the Mueller report. (2)

But there is also resistance on the Democratic left to pursuing the Bank Alfa story. Consider the experience of Franklin Foer after he wrote about the Trump-Alfa connection for Slate:

I started to get the sense that the reception to my piece might not be as warm as I had hoped. Prime-time shows on MSNBC canceled my appearances. I got word that network lawyers didn’t want MSNBC to delve into questions about the server without harder evidence. … By the time I got home, The New York Times had published its now-notorious headline: “Investigating Donald Trump, FBI Sees No Clear Link to Russia. (3)

Many individuals are now facing jail terms because of the Mueller and FBI investigations. But no such danger threatens firms big enough to participate in the higher nexus of what I call the deep state.

Trump vs. ‘Deep State? That’s How Light Gets In

8 responses to “The Mueller Report, Alfa Bank, and the Deep State”