As state after state raises the minimum wage, companies continue to find ways to cheat hourly workers out of pay they’re entitled to — by holding unpaid mandatory off-the-clock meetings, and even requiring employees to continue working after clocking out.

“They’re asked to work off the clock before or after their shift. They don’t get a meal break for each eight-hour shift, companies fail to pay time and a half” when it’s due, Peter Ruark, senior policy analyst for the Michigan League for Public Policy, told WhoWhatWhy.

Sometimes their tips are even confiscated.

Wage theft steals from society as well as from individual workers, according to Ruark. When people do not receive wages or benefits that were rightly earned, “they have less to spend in their communities. It adds to family stress. They may have to receive food assistance.”

Employees are supposedly protected against such practices by the Fair Labor Standards Act, so why don’t they speak up? Because, Ruark said, by definition minimum wage violations affect the lowest-wage workers — the workers who can least afford to bear the cost of fighting back.

“These are people who don’t feel they have a lot of clout to be whistleblowers. They feel their employment is vulnerable,” he said. These employees may feel especially vulnerable in what labor experts are labeling the Trump administration’s employer-friendly environment.

Anthony Paris, lead attorney at the Sugar Law Center for Economic & Social Justice in Detroit, agreed that low-wage workers, especially immigrants, are reluctant to rock the boat. “They think it just goes with the territory.”

Lauren Rosen, one of Paris’s clients, did decide to rock the boat. She said in an interview with WhoWhatWhy that she volunteered to complain to management about stolen tips on behalf of herself and co-workers because “I’ve got no kids, no mortgage.”

In late 2014, Rosen began working at a Michigan restaurant where she helped serve at private parties. The three or four servers who worked each private party would split the tips, she said in an interview, but they didn’t have access to the bill to see how much was paid and how much was actually tipped. 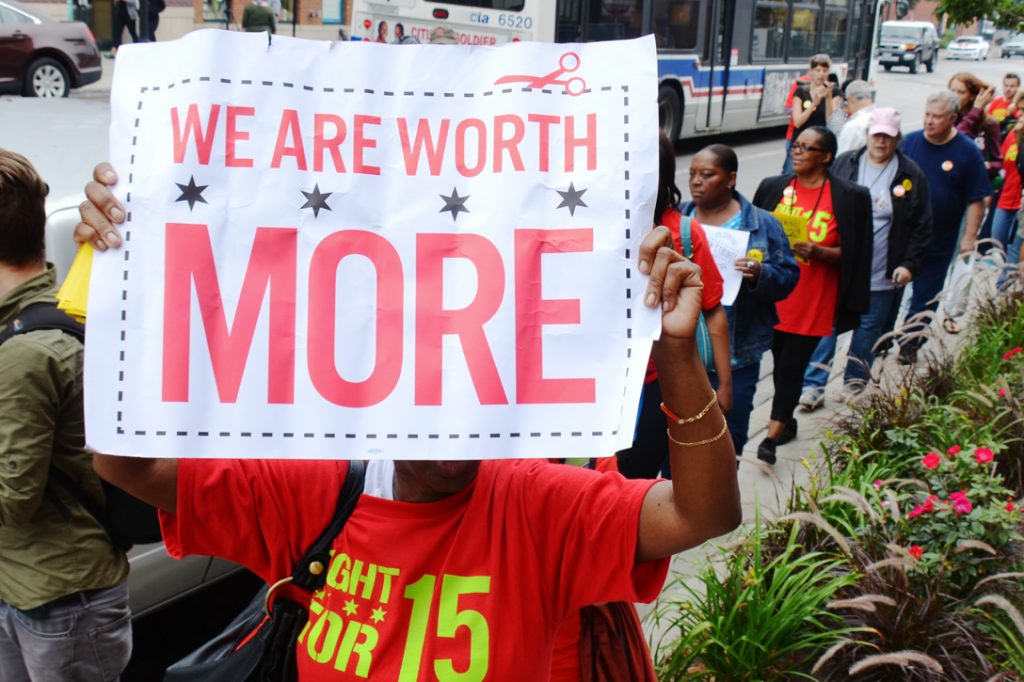 “I’d go out with co-workers after a long party shift. People started talking, asking each other how much they made,” she said. Eventually “one of us got a glance at what they tipped — the total didn’t equal the tip we received.”

Further discussions led Rosen to the conclusion that management paid white workers more than workers of color. “Time after time when I compared with black co-workers, all of us were being stolen from, but it was more so for black workers.”

Eventually Rosen said she was able to sit down with a manager to discuss the situation. “The manager said, ‘okay, I’ll be right back.’ Another manager was brought in and I was fired. They called security. They said I was a threat to others.”

Rosen and others filed a class action suit. Eventually, she said, “There was a deal. They cut everyone a check. My check was $500 for November to April. A hundred bucks a month.”

The Numbers, the Law

Rosen is just one of millions. An Economic Policy Institute report found that, in the 10 most populous states, 2.4 million workers lose $8 billion annually (an average of $3,300 per year for year-round workers) to minimum wage violations. That’s nearly a quarter of their earned wages, according to the 2017 report.

The law that most commonly covers wage theft is the Fair Labor Standards Act (FLSA), dating back to 1938. The FLSA establishes the federal minimum wage, overtime pay, record-keeping, and child labor standards affecting employees in the private sector and governments.

As the owner of private businesses, Donald Trump has been accused of underpaying or refusing to pay hundreds of workers and contractors. (Last year, Trump’s longtime personal driver, Noel Cintron, filed a lawsuit against Trump Organization for allegedly failing to pay him overtime. The two sides later agreed to arbitration.)

As president, he has been accused of rolling back labor policies, including those that protect worker pay.

Damages on minimum wage violations are small and difficult to recover, Haeyoung Yoon told WhoWhatWhy. She was with the National Employment Law Project and is now Distinguished Taconic Fellow with the Center for Community Change in Washington, DC.

“We don’t have enough resources to address and turn the tide against rampant wage thefts. It takes a long time to come forward and file a claim,” and to make sure agencies respond in a timely manner, according to Yoon.

“It takes a lot for workers to come forward. They often have to take time off. There are hard choices every step of the way,” she said. Workers fear retaliation — losing their jobs or having the number of hours they work cut — and immigrants may fear deportation.

Workers who rely on tips to supplement their hourly pay fall into a special, precarious category. In some cases, the FLSA allows employers to pay employees who receive tips less than the standard minimum wage.

“For so long tipped workers have been at lowest rungs of the economic ladder,” according to Jonathan Roberts, of Restaurant Opportunities Center (ROC) in Michigan, told WhoWhatWhy.

“Tipped wages are the legacy of slavery and forced labor … After almost a century it’s legal in many states to be paid less than $3 an hour. In Michigan it’s $3.38. If your tips don’t make up the difference, the employer is supposed to pay you the difference,” he said.

Restaurant jobs are disproportionately held by the most vulnerable in the workforce, Roberts said. “This is not just where high school or college students go to make extra money. The majority are working women, women of color, immigrants who are supporting their families, trying to make ends meet off of poverty wages.” 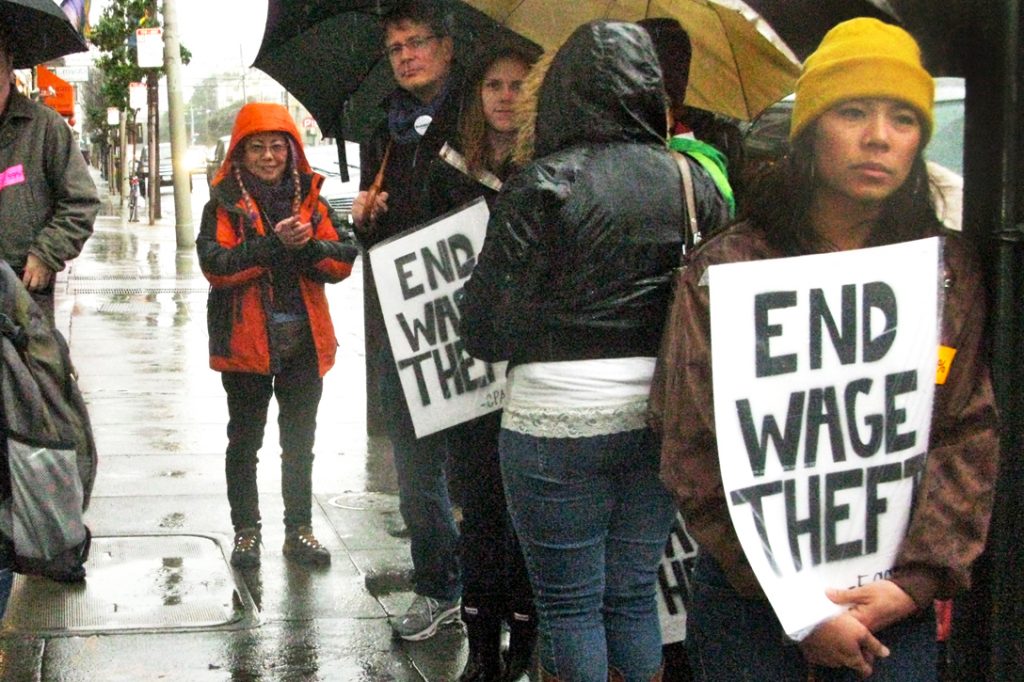 “It’s putting working women in a situation where they have to choose between being insulted or risk not receiving tips. This is a system where working women are constantly taken advantage of.”

Some states and municipalities are stepping up the war against wage theft.

As part of its ongoing initiative to combat wage theft in the construction industry, Massachusetts Attorney General’s Office issued 165 civil citations against 66 construction companies last year. Restitution exceeded $1.47 million for more than 1,030 employees of the various employers, and the companies were fined a total of more than $1.23 million.

Five years ago, the California Labor Commissioner’s Office under then-commissioner Julie A. Su (now California labor secretary), launched the Wage Theft is a Crime multilingual public awareness campaign and cracked down on violators.

The result has been a series of victories in cases involving restaurants in the San Francisco area. In mid-January Rangoon Ruby agreed to pay  about 300 workers $4 million in wages and penalties. In February, as the result of a class action lawsuit, Gordo Taqueria agreed to pay employees $690,000. Also in February, the office cited Southern California subcontractor RDV Construction, Inc., for nearly $12 million in wage theft violations.

The California Labor Commissioner’s Office has partnered with a number of nonprofits in the state, including the Asian Law Caucus, Chinese Progressive Association, and Young Workers United. The nonprofits are able to reach out to the workers, often immigrants who need help with English, and guide them through the complaint process.

These community groups play a vital role in spreading the word about wage theft and in connecting local enforcement agencies with aggrieved employees, according to Haeyoung Yoon. “The community groups help identify cases. The workers are our eyes and ears.”