In Part 1 of this two-part series, Martin Lobel detailed how the Tax Cuts and Jobs Act (TCJA) gave massive tax cuts to the very rich, massively increased budget deficits, increased incentives to move jobs and profits offshore — and minimally increased investment in productivity. All of these events could trigger a revolt. As Lobel put it,

If you build a dam without a spillway, eventually the water pressure will break the dam, sweeping away everything below it. On the other hand, if you build a dam with a spillway, you can channel the pent-up power in useful ways to everyone’s benefit. Enacting the TCJA was like building a dam in the dark to benefit a very small sector of the economy — and to the detriment of almost everyone else. Once the rest of the population realizes what’s happened to them, they would be justified in taking action to defend their own interests. The danger is that any action taken without thinking through the long-term consequences may only make things worse.

.
There are many more complex provisions in the TCJA that will adversely affect the economy especially for Americans below the top 5 percent in income,1 but it’s time to turn to potential remedies to prevent the revolt that threatens to sweep away the Establishment. By the way, this applies to both political parties which, if they survive, will be significantly changed.

The Koch brothers, according to press reports, gave $20 million to support passage of the TCJA and received tax benefits worth between $1 billion and $1.4 billion.3 As the late Senator William Proxmire (D-WI) used to say, “The more complex the tax provision, the more likely it is an unjustifiable subsidy.” Clearly, we need to make all campaign contributions public as soon as they are made. No longer should we allow political money to hide behind PACs or super PACs or 501(c)(4) organizations. All political spending by corporations should be publicly disclosed and subject to the approval of the company’s board of directors.

Role of the Media: The media must do a much better job of exploring and explaining economic issues so that the public understands what lies behind the political catch phrases that are so misleading. This means the end of the he-said-she-said reporting that passes for analysis today. It means that reporters will have to dig deeper and read analyses from the Congressional Research Service,4 Tax Notes, the Tax Policy Center, the Institute on Taxation and Economic Policy, the Center on Budget and Policy Priorities, Taxpayers for Common Sense, the Tax Foundation, the American Enterprise Institute, and others.

For example, there have been lots of stories about how the estate tax, aka the “death tax,” has cost farmers their farms and justified the $11.2 million estate tax exemption for couples — but little about the economic research report from the US Department of Agriculture that could not find one farmer who lost his farm because of the estate tax.5 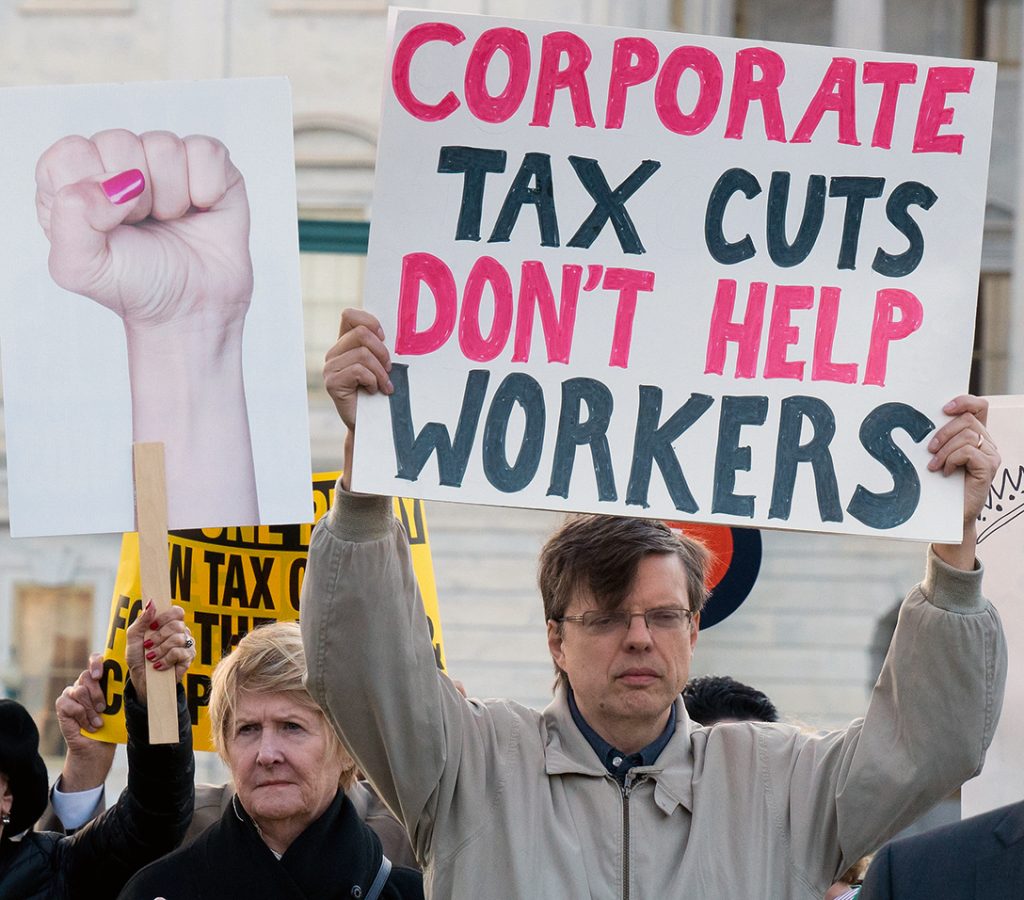 .
Eliminating different rates for different kinds of income would simplify the tax code and eliminate all the complex myriad devices to transform income to qualify it for a lower rate. There is no intellectual justification for taxing income from capital at a lower rate than income from labor. Eliminating different rates for different kinds of income could make the economy far more efficient. Although it would probably not stop the propensity of capital to grow at a faster rate than wages,6 it would help the middle class, which is a prerequisite of our constitutional system.7

Eliminating different rates for different forms of organizations would also simplify the tax code. Requiring different types of corporations, LLCs, LLPs, master limited partnerships, pass-throughs, etc. to pay the same rate of income would eliminate much unnecessary complexity and compliance costs. Indeed, it might be easier to eliminate all taxes on such entities, but require them to treat investors as employees. The entity would pay the investor their proportionate share of the profit less, say, 30 percent, which it would pay to the IRS. It would then issue W-2s to the investors showing that the entity paid 30 percent of the profit to the IRS, which the investors could use as a non-transferable tax credit against the taxes they owed. That would significantly lower administrative costs of collecting the income and would diminish the incentive for investors to hide income offshore.8

Eliminating Transfer Pricing and going to a Unitary Accounting system for multinational corporations to better account for where the income is really earned. Companies would no longer be able to hide their profits in low-tax countries, minimizing their tax obligations in the US. The amount of multinational profit-shifting is so significant that it distorts macroeconomic statistics.9 For example, in 2017, American-based multinational companies reported 43 percent of their foreign earnings in five small tax havens: Bermuda, Ireland, Luxembourg, Netherlands, and Switzerland. Yet, these countries accounted for only 4 percent of the companies’ foreign workforce and 7 percent of their foreign investments.10
The TCJA exacerbated the problem by exempting income from taxation that the companies claim they earned offshore. It adopted a complex form of territorial taxation, encouraging the race to the bottom as the multinationals manipulate various countries to lower tax rates to attract them.11 But, as every IRS commissioner who has testified on the topic has admitted, the IRS lacks the resources to police the efforts to hide profits.

The benefits of eliminating deferral of overseas income and adopting a unitary accounting system are overwhelming, which is why the multinationals fought so hard for the territorial system.12 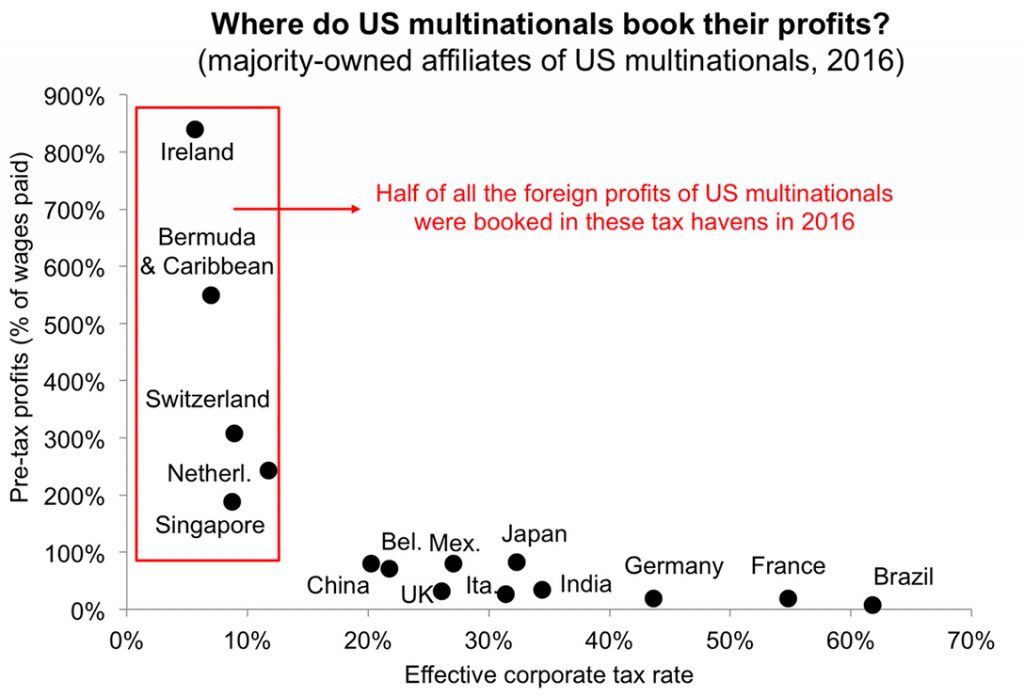 Imposing Inheritance Taxes Instead of Estate Taxes. Because of the high exemption from paying estate taxes, significant amounts of wealth are transferred tax-free, leading to even more concentration of wealth. Shifting to an inheritance tax with, for example, a $2 million exemption would allow the recipients to be taxed at their individual rate on the increase in value between the time it was acquired and the time it was transferred to the beneficiary.14

Providing Adequate Funding for the Internal Revenue Service so that it can fairly enforce the tax code and help cut the deficit.15 Right now it has to figure out what Congress intended in the TCJA without any real public hearings and without adequate resources to effectively collect the revenue it should.16

There are lots more reforms that have been discussed in Tax Notes and elsewhere, like a small tax on the sale of securities to curb speculation, but the question is whether and when we will be forced to implement them to prevent more radical proposals by politicians who want to capture public outrage. Capitalism has allowed us to grow and prosper, but it also needs a policeman.17

Democracy provides a means of policing the concentration and abuse of wealth, but we know that it takes a crisis to energize government to act. Will it be a recession or worse? A trade war? A political crisis? We don’t know, but we do know that we had better be prepared with some well-thought-out reforms to meet the public’s demands for a more equal distribution of wealth and more rapid growth in income.