Voting alone isn’t enough. Someone has to make sure the votes are counted — correctly. But not all election administrators double-check their work. Post-election audits, despite their ability to identify mistakes within hours of the polls closing, are far from routine.

A growing set of academics, experts, advocates, and election officials are out to change that. Many convened at the Election Audit Summit at the Massachusetts Institute of Technology’s (MIT) Election Lab this past weekend. The event was an open forum and featured critical conversations about how to balance the expectations of academics, experts, and election officials mired in the nuts and bolts of running elections.

The Summit arrived amid growing interest in election audits. In September, the National Academies of Sciences, Engineering, and Medicine released a report on securing elections, in which audits figure prominently. The US Election Assistance Committee has published literature of its own. Several states have passed provisions for audits in recent years, but the specifics vary widely. Advocates have been working tirelessly throughout.

Without ballots to check against — as was the case in Georgia, which uses paperless DRE machines — an audit is impossible.

The interest in audits reflect the growing questions regarding the integrity of the election system as a whole. The 2016 presidential election and 2018 midterm elections laid bare the vulnerability of election infrastructure and administration on national and local levels. Foreign interference looms as officials and voters alike prepare for 2020. But the threat of hacking isn’t why advocates and experts alike push for audits — nor did it shape conversations at the MIT summit.

“Framing the importance of audits in terms of finding out if Russians are hacking or if someone is flipping votes is the wrong way to think about things,” Stewart told WhoWhatWhy. “Elections are complicated things and mistakes are made all the time. We want to catch mistakes.”

In the same way that the IRS checks to make sure filed tax documents reflect financial reality, the audit process checks that election results reflect what the voters intended when they filled out their ballots. Audits catch mistakes — whether they are accidental or intentional.

“Even basic things in elections get complicated,” Stephanie Singer, a consultant at Verified Voting, told WhoWhatWhy. “The basic idea is simple: Just don’t lose any. [But] there is all this technical detail to get it right.” 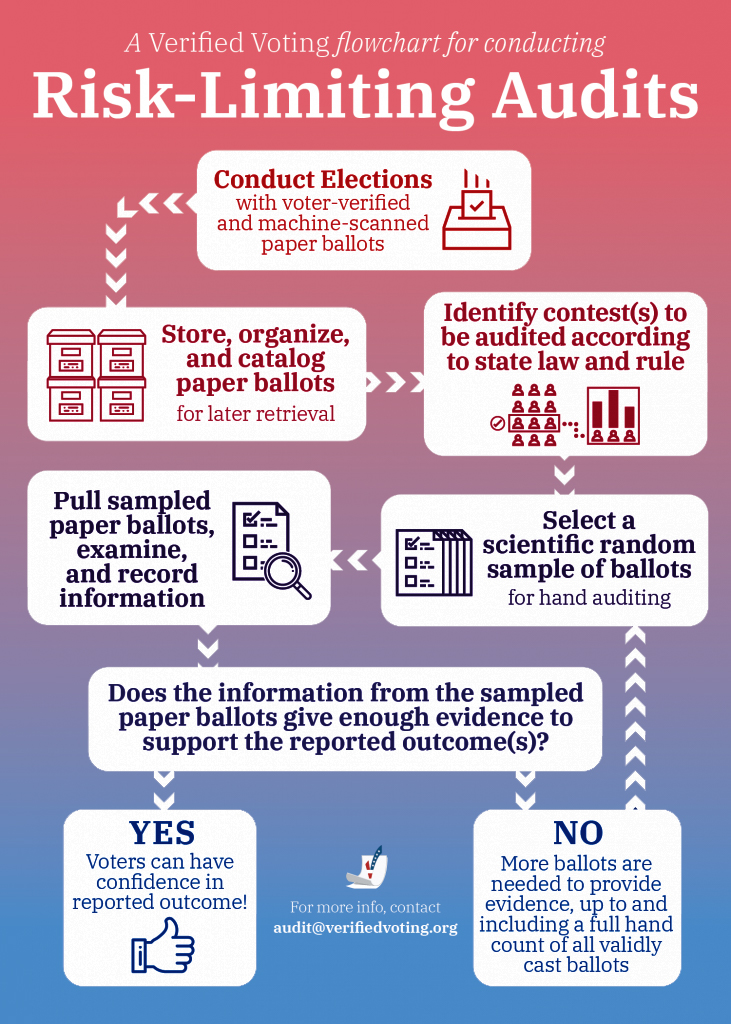 There are several auditing models, but the primary focus at the MIT conference was on risk-limiting audits. The process relies on a statistical concept called a risk-limit to verify results. Unlike in a recount, election officials do not check each individual ballot. Instead, they use a specific system to select a random group of ballots and check them against the cast vote record.

A risk-limiting audit is like tasting a spoonful of soup to test for seasoning in the whole pot, explains Philip Stark, professor of statistics at UC Berkeley and architect of risk-limiting audits. Verifying a small sample of randomly selected ballots gives an accurate read of the count overall.

“You stir it up and you taste a tablespoon,” he said. “What matters is you stir it thoroughly first.” Otherwise, you’re not getting an adequately representative sample. The same is true for ballots. The audited sample has to be truly random for the system to work.

Risk-limiting audits don’t work in all systems: They depend on a paper trail, which means paper ballots. Without ballots to check against — as was the case in Georgia, which uses paperless DRE machines — an audit is impossible.

“The whole thing is kind of pointless without a voter-verifiable paper audit trail,” Stark said. In the absence of a reliable and complete paper trail, a risk-limiting audit could theoretically confirm an inaccurate outcome.

While many sessions focused on the statistics and theory behind the process, two panels presented the view from the ground. Election officials spoke to their experience implementing and managing risk-limiting audits. Though more and more counties are coming on board, Colorado has paved the way for institutional procedure on audits. Over the past decade, the state has taken steps to prepare itself for risk-limiting audit infrastructure and administration.

The process is complicated; it doesn’t happen overnight. In Colorado, it took several years to organize the moving parts. But Colorado’s success offers election officials elsewhere a nuts-and-bolts model to follow. “We’re working with people on how to get them hooked,” Hillary Hall, the former Boulder County clerk and recorder, said in a Saturday afternoon panel.

Stephanie Singer believes that election officials have been reluctant to embrace risk-limited audits because of the daunting prospect of learning a new system from the ground up. In addition to her work as a researcher, Singer served on the Philadelphia County Board of Elections for four years. There, she learned just how much micromanagement and attention to detail election administration requires.

“They’re in a high-pressure situation where mistakes are very costly,” Singer said.

In part, the resistance stems from reformers’ failure to communicate how risk-limiting audits work. One problem is that they depend on mathematical theory unfamiliar to many.

“Engineers and mathematicians have underestimated the degree to which administrative practices are hardwired into the running of elections and how hard it is to change,” Stewart said. Part of his goal for the conference was to encourage conversations between the people who build the technology and conceptualize systems and the people who implement them.

“It’s not rocket science,” Singer said. “It’s much easier to know that once you actually try it out and do it.”

Some election administrators welcome the support and resources from academics and experts. “Ask us questions and we can ask questions,” Barb Byrum, county clerk in Ingham, MI, told WhoWhatWhy. “Our elections are stronger and we’re all better if we work together.” Lansing, MI, which is in Ingham County, is in the midst of rolling out a risk-limiting audit pilot program.

Byrum thinks starting to implement change at the local level matters. “Audits cannot be a one size fits all,” she said. Each state has its own practices and procedures, and testing the waters first matters.

Singer expects to see more election officials warm to the benefits of risk-limiting audits. “Election officials are constantly adapting to new situations,” she said. “They’re actually quite good at it, even when they don’t get the resources and support that they deserve.”

One response to “Getting the Count Right: Experts Debate Election Audits at MIT Conference”