After several months of alarming revelations about problems with Georgia’s voting machines, online registration, ballot counting, Election Day lines, and more, the state’s voters will get to decide Tuesday how elections should be conducted in the future.

The runoff between Democrat John Barrow and Republican Brad Raffensperger for secretary of state is also, according to election-integrity and voting-rights experts, a contest between a candidate who is open to new solutions and one who is simply offering more of the same.

Academics, activists, and the former independent candidate for Georgia’s top elections office all offered detailed assessments to WhoWhatWhy on the steps needed for the state to run fair and transparent elections. These include guaranteeing that the results can be audited if necessary, and ensuring that every eligible voter gets the chance to cast a ballot, regardless of race, ethnicity, or party.

All analysts pointed to Barrow as the one more likely to take action on such changes.

Unfortunately, such ideas as holding “verifiable, evidence-based” elections, making sure all eligible voters can cast ballots, and providing maximum levels of cybersecurity have become politicized in a state whose electoral system has been called “a Petri dish for the rest of the country.”

“It’s an amazing year to be running for secretary of state,” Smythe Duval, the former Libertarian candidate for the office, told WhoWhatWhy. Duval’s 2.2 percent of the November 6 vote helped send Barrow and Raffensperger to a runoff. “In terms of shining a light on the election system,” Duval said, “every time you turn around, there’s another area suffering from neglect.”

Duval, who works as an IT director at a medical firm, announced his endorsement of Barrow last week: “In conversations I ended up having with him … he was favorable toward election reform.”

Specific reforms on the table include: helping people with difficulties obtain the identification needed to comply with Georgia’s voter ID law, and implementing so-called “same-day” voter registration, in which voters can register on Election Day. Together, Duval said, these two practices would “actually increase the integrity of the voter rolls, and be an excellent hedge against abusive purge practices.”

Same-day registration would also reduce the need for provisional ballots, which are usually needed when poll workers can’t verify that a voter is registered. The use and misuse of provisional ballots were the subject of several lawsuits during the midterms.

In what was meant to be a televised debate between the two Tuesday — but which turned out to be a Q&A between Barrow and several journalists, after Raffensperger’s campaign canceled due to “scheduling conflicts” — the Democrat said he wanted to fix problems linked to policies such as “purg[ing] people who haven’t gone anywhere and weren’t notified of what was happening to them until they get there on Election Day.”

Meanwhile, two of the three elections-related positions on Raffensperger’s website refer to ensuring that only “legal American citizens [can] vote” — although, as reported by WhoWhatWhy, governor-elect and former Secretary of State Brian Kemp’s own data show practically no evidence of noncitizens voting.

Neither candidate responded to WhoWhatWhy’s requests for an interview.

Cybersecurity: How to Fix It?

Barrow and Raffensperger also disagree about how to solve cybersecurity problems with Georgia’s outdated touchscreen voting machines. Georgia is one of only five states to use these machines statewide. Nine states use them in some locations.

Multiple problems with the system have been exposed for several years, starting with two cyber researchers demonstrating, in 2016 and 2017, how easy it was for anyone to gain access to everything from voter information to poll-worker passwords. Then–secretary of state (and now governor-elect) Brian Kemp’s only response was to move the administration of the system from Kennesaw State University to his office, bringing the same person — Michael Barnes — over as director. Barnes has said publicly that he is not an expert in cybersecurity, and that the state made no effort to hire such an expert after the incidents.

Three days before Election Day, WhoWhatWhy exposed another cyber issue: the state’s voter registration and voter information pages online could be easily manipulated by anyone with some computer savvy. After a voter had contacted the state’s Democratic party about the risks, WhoWhatWhy investigated — and confirmed the details with recognized computer experts. An hour after publishing a story on the issue, the secretary of state’s office responded by announcing an investigation into Democratic “hacks” into the system. (Nothing has become of the investigation in the weeks since.)

Barrow has publicly pledged to decertify the entire voting system and push to use paper ballots filled out by hand and then scanned in future elections.

The Democratic candidate for secretary of state has made a point of attending events where cybersecurity is discussed in detail, noted Richard DeMillo — who is a professor of computer science at Georgia Tech and has had a leading role in technology and security at Hewlett-Packard, Bell Communications Research, the National Science Foundation and the US Department of Defense. This included the October 3 Atlanta screening of I Voted? — a 2016 documentary that shows “millions of Americans cast unverifiable digital ballots on vulnerable voting computers.”

Raffensperger has indicated on his website that he intends to “update all voting machines with improved paper ballot verification for ballot security.” This is different from moving to hand-marked paper ballots in at least two ways: computers would still be the main vehicle for casting a vote, and the voting machines Raffensperger is referring to actually produce ballots with barcodes — which can’t be read by voters.

Whomever Georgia voters elect to secretary of state will inherit a commission Kemp formed earlier this year to “study options for Georgia’s next voting system.” Duval has attended both of the commission’s meetings to date, and notes that the group has not carried out or delegated “in-depth research” into the state’s voting system problems, and how a new system could solve those problems. “There’s no large-scale review about how they’re administering elections,” he added.

Instead, by the second meeting, commission members were already talking about buying new technology. At the same time, the commission’s 18 members only include one computer expert — Wenke Lee, co-executive director of Georgia Tech’s Institute for Information Security & Privacy. “Given that Georgia is one of the nation’s centers of cybersecurity research and development, the commission has not done nearly enough to invite testimony from local experts who are readily available,” said DeMillo.

“Professor Lee offered to give a cyber security tutorial to the commission, but the co-chairs permitted him only an informal lunch talk which was not open to the public, and testimony from a panel of national security experts was immediately marginalized by comments from the co-chairs, who questioned whether those experts had correct information. They haven’t consulted anyone else I know in my field,” said DeMillo. “I hope I see a change” with the new secretary of state, he added.

The state legislature will likely take up the issue of what voting system to buy, and for how much, when the 2019 session begins in mid-January.

“The Legislature needs to have independent, critical thinking,” Marilyn Marks, executive director of the Coalition for Good Governance, told WhoWhatWhy. “We’ll see if they’ve learned a lot in the last few years,” she added. Marks’s group, which has filed a series of lawsuits over election irregularities, advocates for hand-marked paper ballots as the cornerstone of secure voting. 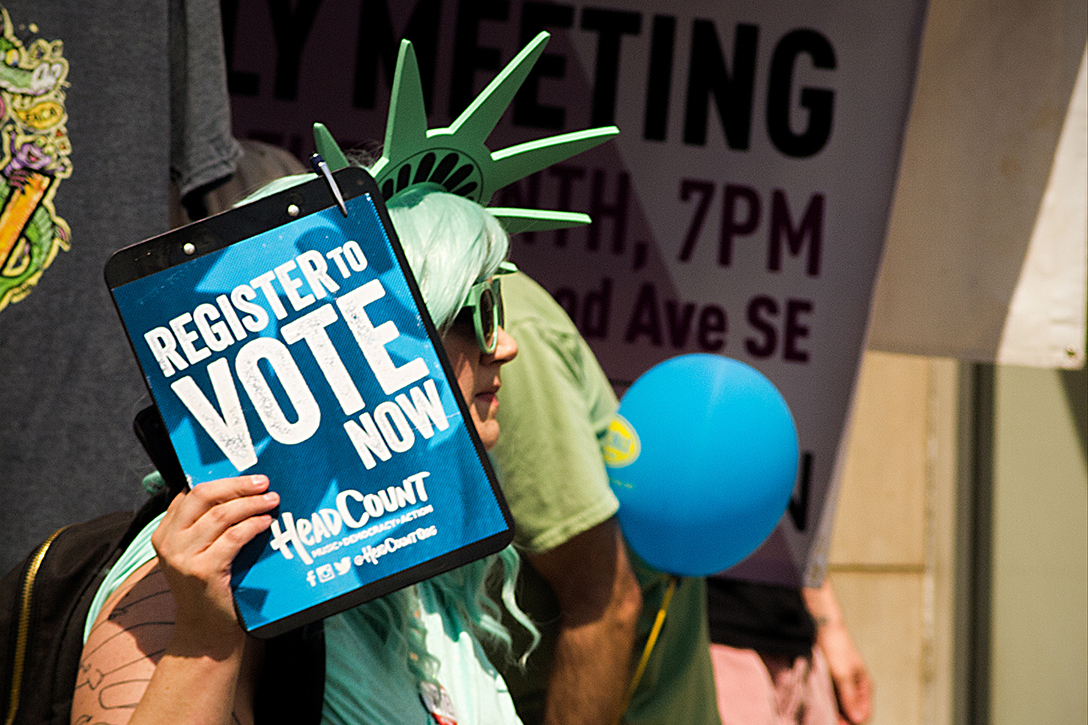 Independent groups should be encouraged by the Georgia secretary of state’s office to register voters and help get out the vote, not litigating, says Sara Henderson, executive director, Common Cause Georgia. This HeadCount volunteer is registering voters in Atlanta, Georgia, on September, 22, 2018. Photo credit: Thomas Cizauskas / Flickr (CC BY-NC-ND 2.0)

Another issue experts point to as important for a secretary of state to address is the relationship between the state’s top elections official and the groups working on election integrity and voting rights issues.

“We can’t be seen as the enemy,” said Sara Henderson, executive director of Common Cause Georgia, an organization that trained 500 poll monitors in the midterms — and was successful in obtaining a court order forcing Kemp’s office to count all provisional ballots. “We hope whoever wins sits down to rebuild relations,” she added. “We don’t want to litigate — we could be encouraging voting in Georgia, if we had a stronger coalition of nonprofit organizations working with the secretary of state.”

The same observation holds true for poll watchers. They became a focus of contention several times in Georgia after November 6, as local elections officials in places like Gwinnett County, the state’s second-largest county, prohibited poll watchers from closely observing processes like the counting of paper absentee ballots.

“I would hope that, going forward, state and local elections officials acknowledge transparency, [don’t] treat observers as intruders, and reduce the level of confrontation,” said DeMillo, who is also a certified, statewide poll watcher.

Regardless of the outcome, Georgia’s new secretary of state will likely keep the state’s elections in the headlines for positive or negative reasons in the years to come — including the 2020 presidential contest.

“In a lot of ways, election security in Georgia is a Petri dish for the rest of the country,” DeMillo told WhoWhatWhy. “We only have one system for the whole state, a lack of expertise in the secretary of state’s office, adversarial attitudes between voters and the people charged with administering voting, and a complete lack of transparency.”