So the state’s residents, forced to adapt to these new, unnatural disasters, began to purchase earthquake insurance.

“There is a higher take-up rate in earthquake insurance given the last few years, [because of] the increased seismicity our state has seen,” John Doak, Oklahoma’s insurance commissioner, told WhoWhatWhy.

The waste products of hydraulic oil fracking, otherwise known as toxic wastewater, cause these earthquakes. The wastewater gets pumped to the surface and injected back into the earth at various depths.

“Wastewater injection can induce small earthquakes to occur, leading to larger ones, in a cascading effect,” said Jacob Walter, the Oklahoma Geological Survey’s lead seismologist. He noted that the area in which the wastewater is injected has no clear correlation to where the earthquake will occur, because of the countless earthquakes triggering each other in unpredictable patterns. 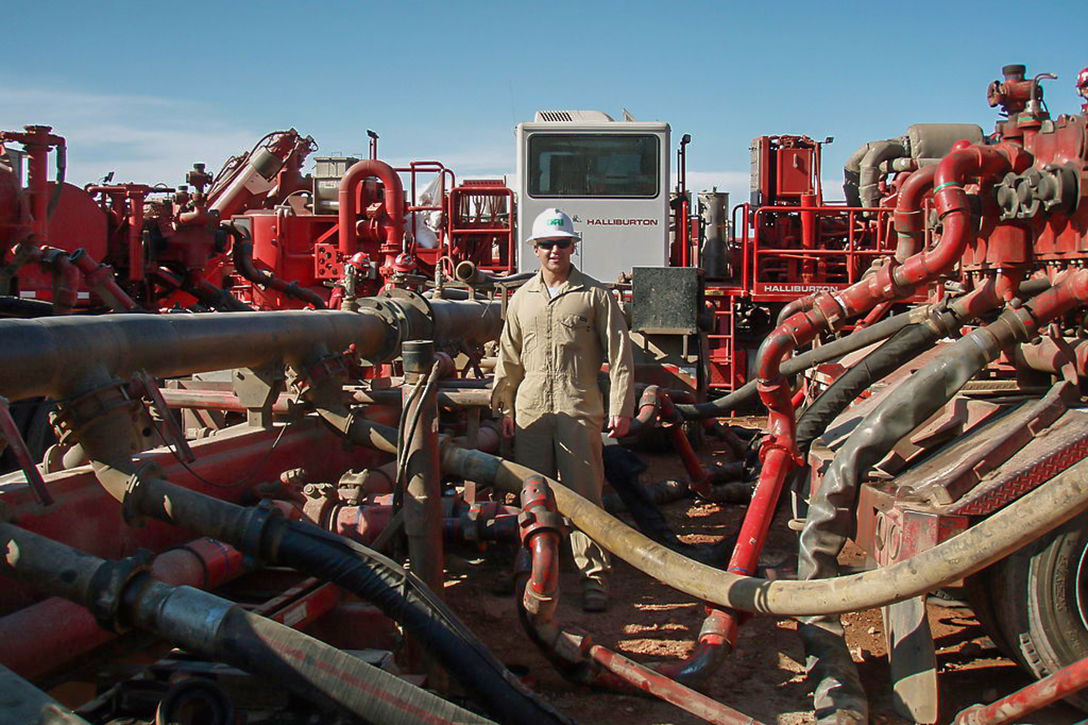 Water is mixed with fracking fluids before being injected into the ground. Photo credit: Joshua Doubeck / Wikimedia Commons (CC BY-SA 3.0).

These unpredictable earthquakes can have devastating effects on homes, buildings, and infrastructure. Among the most quake-prone buildings: brick structures and those made of unreinforced masonry.

“The larger earthquakes — magnitude 4.0 and larger — have the potential to damage structures, in particular unreinforced masonry walls,” Scott Harvey, assistant professor at the Oklahoma University School of Civil Engineering, told WhoWhatWhy. That means the tremors often affect buildings that provide indispensable services after earthquakes, such as police stations, fire stations, and city halls; these tend to be built of unreinforced masonry.

For instance, the Cushing Police Station is made of brick, as is the Pawnee City Hall. Both places experienced powerful earthquakes in 2016.

To make matters worse for the citizens of Oklahoma, insurance companies know how vulnerable unreinforced masonry is.

The cheapest insurance costs between $30 and $50 annually. However, when it covers unreinforced masonry, it can range from $300 to $400 a year. This spike in price can accumulate over the years into a punishingly large amount of money, especially when earthquake insurance is such a necessity.

In addition, earthquake insurance is typically subject to large deductibles. And, even though they are not the ones who induced the tremors, regular people end up holding the bag because, as of now, the oil companies causing the quakes refuse to pay for any of the costs, insurance or otherwise.

That doesn’t sit well with Oklahomans who are experiencing this new strain on their wallets.

“I think the oil and gas industry should pay for the damage they caused,” Sharon Wilson, a senior organizer for Earthworks and a former oil and gas worker, told WhoWhatWhy. “Homes built in Texas and Oklahoma were built to withstand wind, not earthquakes.”

Earthworks, a non-profit organization formed in 2005, strives to protect the earth and its inhabitants from the destructive effects of oil and mineral extraction.

Fellow environmentalist and lawyer Erin Brockovich, who became known worldwide through the eponymous movie about her, told KOCO 5 News in Oklahoma City in 2017 that, “The communities definitely [are] feeling frustrated and voiceless and helpless and are not sure where to turn.”

The citizens of Oklahoma are currently struggling with two giants: the raw power and damage of earthquakes, and the large corporations that refuse to provide aid or take responsibility for their actions.

Meanwhile, Brockovich is assisting one community that refuses to be silent — the Pawnee Nation of Oklahoma. 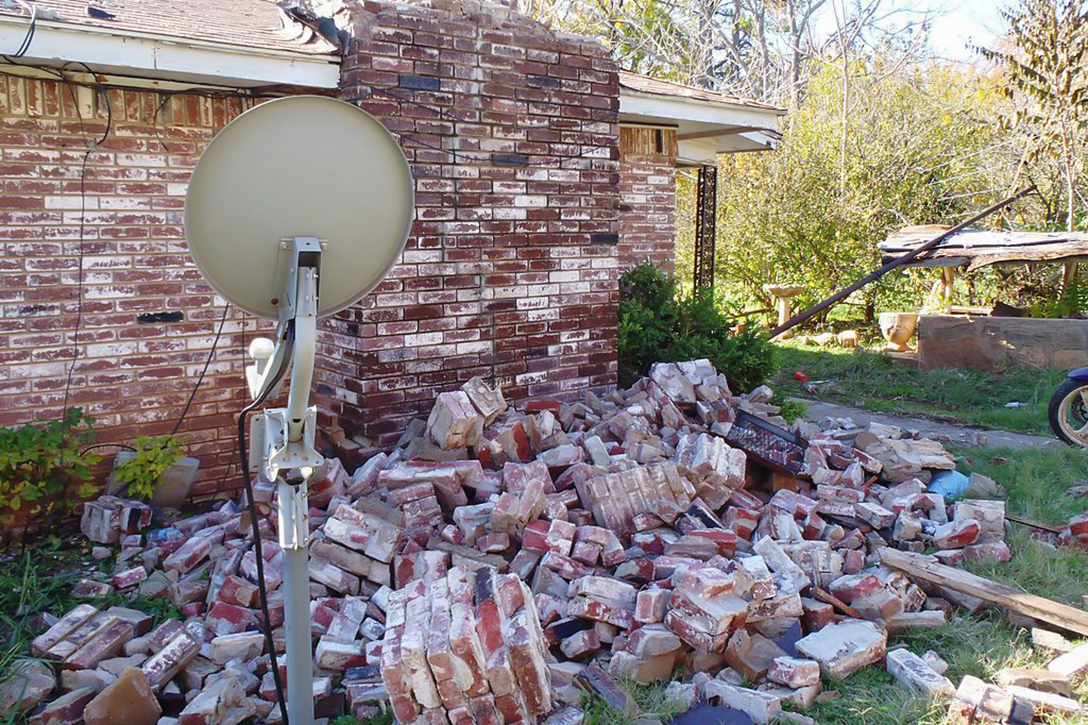 The money and power that the oil and natural gas corporations wield — and spend on influencing politicians and hiring the best lawyers — gives rise to a perception that they can continue their operations without being called to account for Oklahoma’s induced earthquakes.

Now the citizens of the Pawnee Nation are using tribal law to push back against having to pay for earthquakes caused by fracking.

On September 3, 2016, a 5.8-magnitude earthquake struck the Pawnee Nation. It damaged every historical building at the Pawnee headquarters — all made of unreinforced masonry and many over one hundred years old. That includes buildings in the national register of historic places.

“The stone cracked, and plaster walls cracked and ceilings collapsed and those kinds of things,” Andrew Knife Chief, executive director of the Pawnee Nation told WhoWhatWhy. “It shut us down for a little bit, we were closed as a nation for four days, which makes it very difficult for our citizens because we provide services to our tribal members and then we weren’t able to do that and then construction was happening, and it took about a year.”

The Pawnee Nation had the foresight to obtain earthquake insurance in 2009, when the rise in induced earthquakes began. So, one might think the nation would be spared the worst consequences of the man-made of disaster.

This was not the case.

“The sticker price for just fixing the buildings here from the damage was half-a-million dollars,” said Andrew Knife Chief. “But the manpower and the effort that it took to go through the buildings and to hire the structural engineers we needed to come out and make sure it was safe, [and] getting together of the emergency personnel that we have here — it cost us quite a bit of money.”

Knife Chief added, “Insurance didn’t cover everything and so it had to come out of pocket, so it’s the Pawnee Nation that is paying for it.”

Not only did the historic buildings suffer damage, so too did the houses of many Pawnee citizens. After the 2016 earthquake hit, more than 30 tribal members reported damage to their homes. To make matters worse, not many tribal members can afford earthquake insurance, so the affected homeowners had to bear all costs out of pocket.

But the damage done was not just material.

“I think the thing that hurt the Pawnee Nation most is just the damage to our citizens’ psyche,” Knife Chief said.

Unlike the city of Pawnee — which also suffered damage — the Pawnee Nation has the ability to control who uses its land and for what. Within the nation’s sphere of influence, it has considerable power.

So the nation passed the Energy Resource Protection Act in 2017. This act established “the requirements of notification, reporting, and monitoring for exploration, extraction, and marketing of the energy resources within the Pawnee Nation.”

“We have a responsibility under our constitution to preserve the natural resources and protect our citizens, so that is what we are doing,” Knife Chief said.

With Brockovich as its lawyer, the Pawnee Nation of Oklahoma sued the 27 oil companies that caused the induced quakes in the Pawnee Nation area (which covers 595 square miles). Knife Chief states that while the nation is not anti-oil and -gas, it is “just trying to push for responsible energy production here in our jurisdiction, and we feel that there is some activity that is being engaged in that causes an undue risk to the Pawnee Nation, and its tribal members. So that is really what we are fighting against, irresponsible actions and really ultra-hazardous activity in the underground injection control wells.”

The oil companies attempted to argue that the case should be brought in a state court. However, Judge Dianne Barker Harrold ruled in favor of the Pawnee Nation, stating that this issue was to be resolved under the Pawnee Nation court of law. The trial was moved on to the discovery phase on October 27, 2017.

Eagle Road Oil LLC and Cummings Oil Company, the two companies named in the lawsuit (the others were unnamed), did not respond when WhoWhatWhy reached out to them for comment.