What do the following seemingly disparate events have in common?

Pennsylvania: After the court’s decision to throw out a Congressional redistricting plan, state legislators call for the impeachment of state Supreme Court judges.

According to some court-followers, these varied political developments are part of a longer-term effort to achieve one — nefarious — goal: to undermine the political independence of the judiciary and, along with it, our system of checks and balances.

Why Should You Care? You Be the Judge

With the more immediate, “in your face” issues of healthcare, the lack of decent jobs, and global warming’s impact, fretting about an independent judiciary would seem to be solely the concern of policy wonks.

Yet so many judicial decisions impact the everyday lives of American citizens.

In the state of Florida, bills that greatly restricted reproduction rights, placed caps on medical malpractice suits, and widened the scope of death penalty convictions have been found unconstitutional by the Florida Supreme Court.

And the list does not end there. The Florida Supreme Court has made decisions narrowing the scope of “stand your ground” legislation, striking down a Congressional districting map, and setting new limits on sentences that juveniles could receive for serious offenses.

Both legislative and executive branches must stay within constitutional bounds, concurred Ethan Rice, an attorney with Lambda Legal.

Although Republicans in Florida have been in firm control of the state’s executive and legislative branches, the same has not been true of the Florida Supreme Court, the state’s top judicial branch.

Three of those seven judges are facing mandatory age retirement at the end of the first week of January. Outgoing Republican Governor Rick Scott has said he intends to fill those vacancies before he leaves office.

To prevent this happening, the Florida League of Women Voters and Florida Common Cause sued. They argued that Scott had overstepped his authority and only the incoming governor has the right to make those appointments.

On October 15, the Florida State Supreme Court ruled in favor of the plaintiffs. 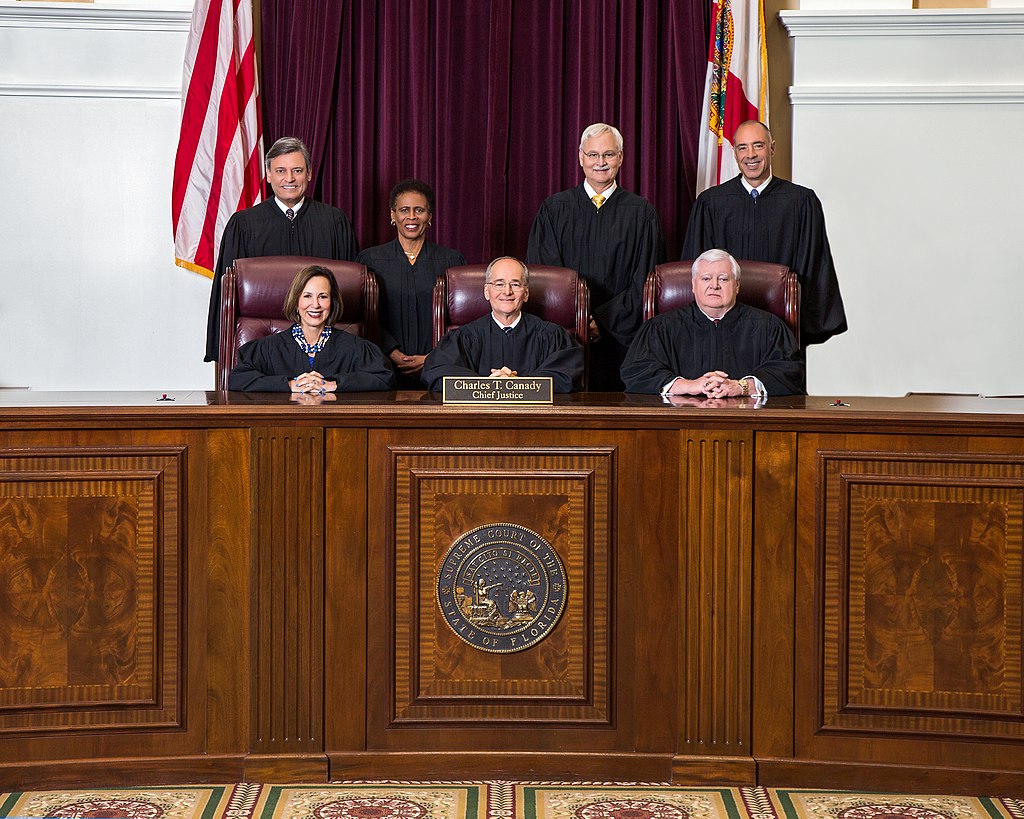 While Florida’s situation may be unique to that state, Scott’s attempt to pack the courts has parallels in other states.

“There have been a number of efforts, particularly by legislators … to reshape courts, and to pack courts in some kind of similar way that Scott attempted to do,” Rice stated.

Scott’s power-grab is seen as a potential precedent. It could have a chilling effect on other states considering the same thing, Filer observed.

Other advocacy groups have taken great pains to frame the recent decision in strictly legal, separation-of-powers terms, and not as one of partisan politics.

“They [the League of Women Voters and Common Cause] are nonpartisan organizations that are only concerned there is a fair process and that the people of Florida are heard in that process,” John Mills, lawyer at The Mills Law Firm, told WhoWhatWhy.

The Mills firm filed the legal challenge to the Scott administration’s attempt to fill the Florida Supreme Court vacancies, on behalf of the League of Women Voters and Common Cause.

While most of the efforts to undermine the independence of the judiciary have come from the Republican Party and political right, these groups don’t hold a monopoly on those tactics.

If the Democrats do well in the midterm elections, the push to rein in the court’s authority could come from the other side of the political spectrum.

“You have seen a lot of proposals in the last few months from left-leaning academics or consultants, that once the Democrats get control of Congress, they should expand the Courts,” Michael Nelson, Penn State political scientist, said.

As important as the court ruling was in the Scott case, many court advocates see it as incomplete.

Any incoming Florida Governor will have to fill Supreme Court vacancies from a list recommended by the supposedly independent Judicial Nominating Committee (JNC). And, the JNC positions have largely been filled with Scott loyalists.

Advocates in Florida maintain that more needs to be done to guarantee judicial integrity. In the short run they have proposed that the JNC reopen the filing deadline, allowing new candidates to apply. Others have proposed more far-reaching reforms.

Under the present system, the governor appoints five of the nine JNC board members, with the Florida State Bar nominating the other four. But Governor Scott has rejected over 90 of the Bar’s recommendations, giving effective control to the governor’s office, Rice stated.

Prior to 1998, JNC appointments were done under the “Askew model,” named after former Florida Governor Reubin Askew. Under this model, three of the JNC board members were appointed by the governor, three by the Florida State Bar, and the other three were chosen by the other six appointees.

“The whole idea was to remove partisanship and patronage from the system. The original Askew model has been a model followed across the country,” Mills said.

Indeed, there has been legislation introduced before the Florida legislature to make the “Askew model” law again. And some judicial advocates propose even more ambitious reforms.

Despite the high court’s decision, Governor Scott has not thrown in the towel.  He has asked the court to modify their order to allow him and the newly elected governor to jointly appoint three justices to the state’s highest court.

The Florida Access Project has come up with a nine-point plan to create a more independent and diverse judiciary. Some of those proposals include more citizen involvement in the JNC nomination process, implementing merit selection at all levels of Florida courts, and creating goals and benchmarks to increase judicial diversity.

Most reformers take it as a given that representative government works best when people are engaged. “When things are happening behind closed doors … things go off-track … and move away from the public interest and tend to be more in [favor] of some [special] interest group,” Filer asserted.

Others view the lack of diversity in the Florida judiciary as a huge problem. Less than 9 percent of the state’s judiciary are Hispanic and less than 10 percent are black, noted Filer. Those numbers are far below the actual percentages of the two respective minority groups in the state’s population. And that problem is not unique to Florida.

In 2016, the American Constitution Society, published an in-depth study of the makeup of all courts for all 50 states titled “The Gavel Gap.” The report found that women made up less than one-third of state judges, despite comprising roughly one-half of the population.

The report notes that state courts handle 90 percent of all the judicial business in America and approximately 94 million cases were brought before trial courts in 2013.

Judicial Reform in Other States

Filer estimated that about 30 states have judicial-reform movements with active grassroots participation. In states as diverse as Kansas and Alaska, the reform proposals vary widely but the advocacy organizations generally share some basic values.

These values are: the promotion of a strong, independent judiciary, free of undue influence from the state legislature or governor’s office; judges selected according to merit; and greater diversity in state courts.

A recent US Supreme Court ruling may give the state movements a shot in the arm. In an October 29 decision, the Supreme Court rebuffed a bid by Republican legislators in Pennsylvania to reinstate a Congressional district map that had been struck down by that state’s top court as unlawfully biased in favor of Republicans.

Some have speculated that this ruling will pave the way for other state supreme courts to reject blatantly gerrymandered maps. They reason that the high court’s decision sends a clear signal to other state courts that they have the power to block unlawfully partisan redistricting.

And North Carolina voters this last Tuesday decisively rejected a constitutional amendment that would have given the state legislature more of a say in filling judicial vacancies. The amendment, pushed by Republican legislators, was seen by many as an effort to pack the state court.

“Voters stood up and said NO to unnecessary partisanship in our courts,” Justin Guillory, a campaign director for the opposition, stated.

“When we start meddling with institutions simply because we don’t like a certain outcome, those institutions lose legitimacy,” said Chris W. Bonneau, a political scientist at the University of Pittsburgh. “If we want them to have independence, sometimes they’re going to do things we don’t like.” If recent legal decisions and the uptick in the grassroots activity by court advocates is any measure, such “meddling” with the independence of the judiciary will be met with increasing resistance.