Going to jail for voting has become a real concern for some Georgians, like Pamela Winn.

Until this week, Winn was worried about casting her own ballot. She’s registered. She knows the politicians and the issues. But she has a felony conviction, too.

Winn’s fears have been stoked by a spate of cases across the country where people have been prosecuted for voting while still on state supervision — despite the fact that none of those votes altered the outcome of any election and the voters did not know it was illegal for them to cast a ballot.

Now, when Winn meets people on probation or parole, she counsels them, “Don’t go to jail just for voting.”

In February, Winn completed her sentence on federal charges for bank fraud. In Georgia, that means she should be automatically eligible again to vote. Her probation officer told her she can vote. Nse Ufot, the director of the nonprofit advocating for wider voter registration, New Georgia Project, where Winn volunteers as a voting rights activist, told her she can vote. 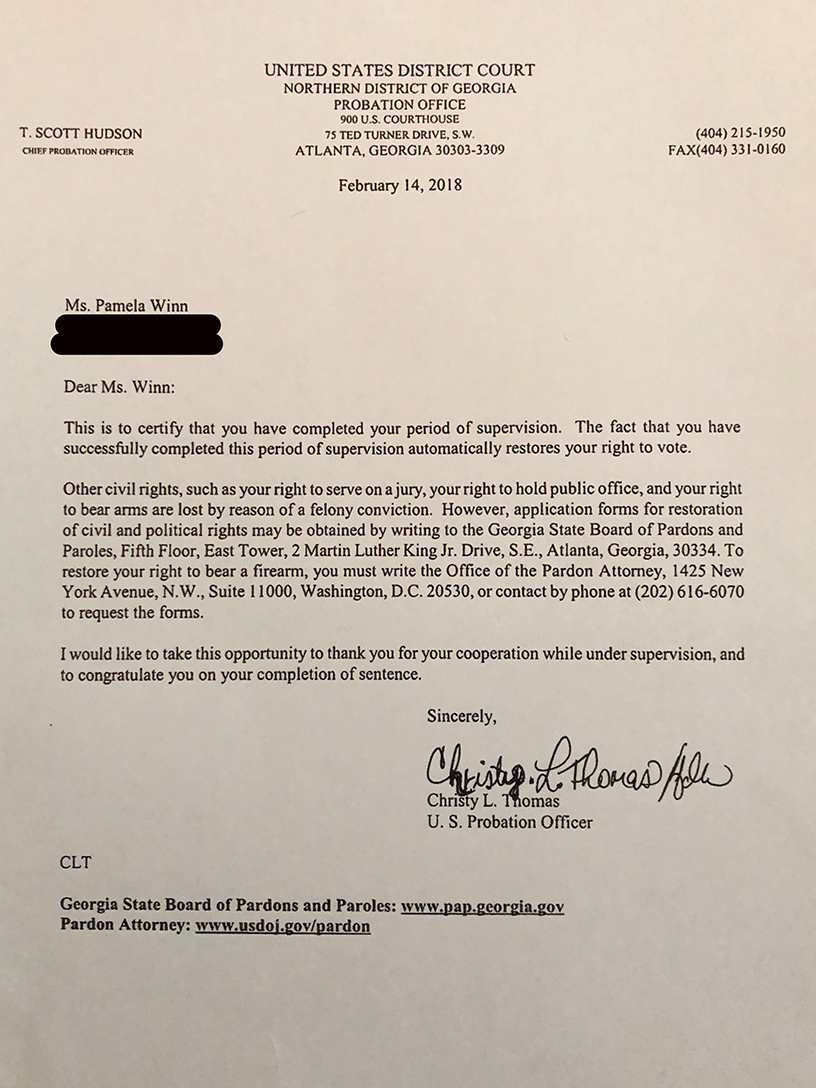 But no one is certain because the language in Georgia law and Winn’s federal sentence don’t exactly line up.

Felony disenfranchisement is a generations-old, living relic of the Jim Crow era, often written directly into state constitutions, like Georgia’s. It’s not just about removing a certain class of individuals from the rolls.

Contained within felony disenfranchisement are several forms of voter suppression: intimidation, voter purging, confusion, retribution, allegations of fraud, and across it all, disproportionate minority impact.

Until this week, Winn hadn’t received any official written notification — which she regularly asked for over the phone and in writing — that she was eligible to vote.

“How can you penalize a person? [Former felons] may think they’re clear, but the people who are supposed to know aren’t even sure,” Winn said.

In Georgia, it’s common for people not to know whether they’re off probation or parole, said Doug Ammar, executive director of the Georgia Justice Project. And because felons and former felons are often not told whether they’ve regained their right to vote, confusion abounds.

“They put all the burden on the people with the least amount of power in this situation,” Ammar said. “Then there’s the recent persecution, prosecution of these folks.” 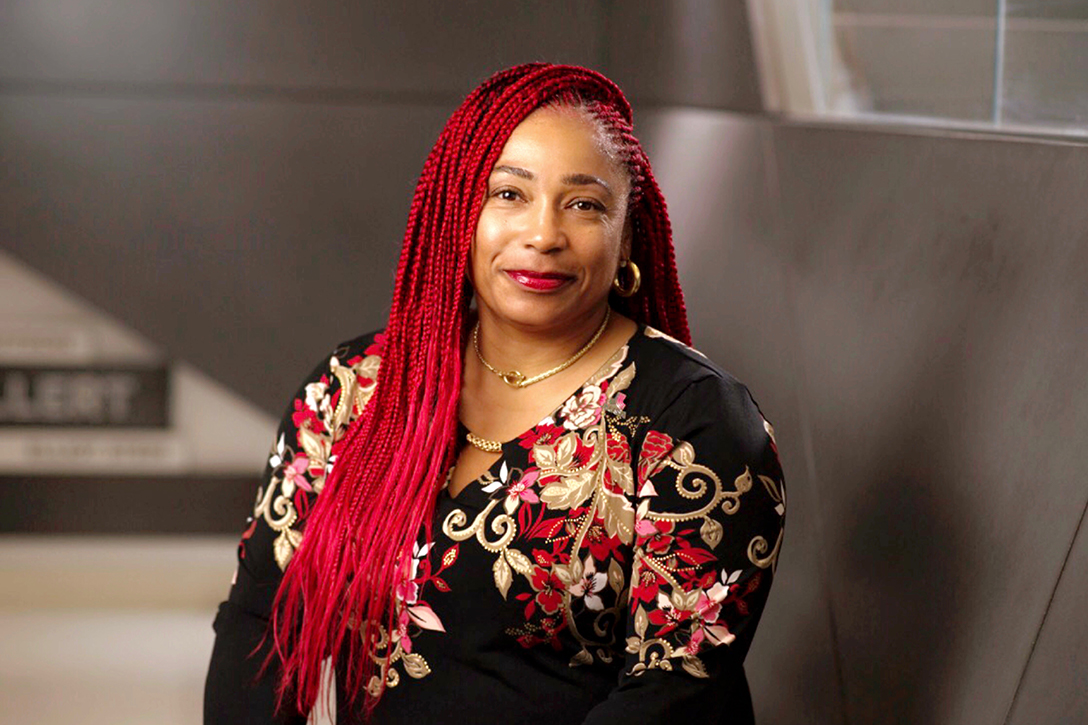 He stressed that this is true in any big government system, but it is especially so in the criminal justice system, which Ammar said deals largely with people who have almost no power.

During an interview at a pizza joint in Atlanta’s famously off-beat Little Five Points neighborhood, Winn discussed state-by-state disenfranchisement laws with another woman who has a felony conviction for a federal offense. She still has three years of probation left on the books.

WhoWhatWhy is using a pseudonym — Tia — to protect her identity, because of fear of prosecution. In Georgia, if someone “knowingly gives false information when registering as an elector,” they can be prosecuted for a felony with punishments of one to 10 years imprisonment and up to a $10,000 fine. That’s just to register — not even to cast a ballot.

To sign a voter registration application when you’re not eligible is to give false information. Tia didn’t know that when she signed, but that caveat hasn’t stopped prosecutors in other states, stoked to action by the current political climate. Nevertheless, it’s still extremely rare to go after someone simply for registering.

Tia got her voter card, but when Winn showed her how to check her status online, Tia’s registration had been canceled. If she had gone to vote early, or had cast a mail-in ballot, she would have committed another felony, likely never knowing it — unless a police officer came knocking on her door.

“It makes you feel like it’s another form of criminalization and a kind of entrapment because nobody can tell you exactly what the law is,” Winn said. “You’re going to people who should know what the law is, but they don’t know what to tell you. So, you use your discretion, but then they use their discretion to prosecute you.”

Voter Intimidation and the Specter of Fraud

Tia was planning on voting until she met Winn and learned that she would be committing a crime.

Winn told her the story about a woman in Texas who was arrested and sentenced to five years prison time — pending appeal — for unknowingly voting illegally. Crystal Mason was on supervised release from prison for felony tax evasion; by state law she was not eligible to vote, though she didn’t know it. She was surprised she wasn’t on the voter rolls and cast a provisional ballot. Three months later, Mason was called into court, arrested, and charged with illegal voting.

In North Carolina, 12 people in one county were charged with voting illegally while on probation or parole. The local prosecutor decided to press charges although no other district attorney in the state took action in similar cases in their own counties. The people who voted while still on probation were allowed to vote and did so thinking they had the full right to do so, and then were punished for it months later.

When North Carolina’s State Board of Elections audited the election, it found 441 “open cases of voting by suspected active felons,” with 16 sent to prosecutors, out of 4.8 million votes cast.

In Georgia, cases of potential voting fraud by people still serving felony sentences are brought before the State Board of Elections each year. Sometimes, the cases are bound over to the district attorney’s office. These cases do not tend to be prosecuted, perhaps to the chagrin of board members, meeting minutes from 2017 show. 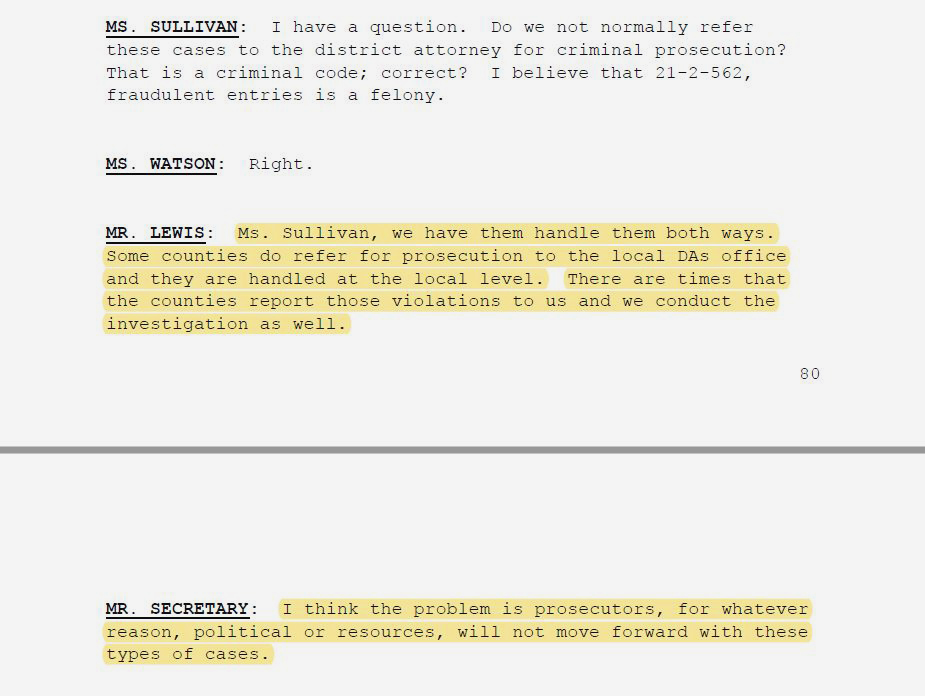 Photo credit: Office of the Secretary of State (PDF).

Before Winn went to vote Friday, she called the Fulton County Board of Registration and Elections just to make sure she was eligible.

Fulton County’s voter registration manager, Ralph Jones, couldn’t answer Winn’s questions. The problem is, Winn owes restitution even though her case has been closed. At the state level in Georgia, it is not possible to owe restitution and close a case, or to close a case and still owe money.

In the end, he relied on the state’s voter rolls. Winn registered to vote months ago and hasn’t been removed.

“If you’re registered, I would say go ahead and vote because we clear the rolls every month,” Jones said. “If you’re still on there, you should be good.”

Tia is among 281,000 other Georgians serving felony sentences.

The disproportionality strikes hard on the voter rolls, too. Records provided by the Secretary of State’s office show that there are currently 173,601 voter registrations canceled due to a felony (not everyone convicted of a felony is registered to vote), 48 percent being black voters. African Americans make up only 30 percent of Georgia’s registered voter population.

Not only are black Georgians disproportionately incarcerated, African American registered voters are, too.

Felony disenfranchisement is written into state constitutions — including Georiga’s — and is a generations-old tool for depressing the black vote, according to Michael Owens, associate professor of political science at Emory University.

“Georgia’s disenfranchisement law comes from a much earlier period in American history,” Owens said. “And we know that it was intended to primarily influence and affect the ability of African Americans to be full citizens in the state of Georgia.”

For many Georgians, all they have left on their sentences are time — and money.

Among the requirements of being on probation is to pay money back to the state. That could mean “restitution,” paying money to the state that is funneled into a victims’ compensation fund. It could also — and usually does — mean paying fines and fees for court costs and for paying for their own supervision, under a controversial Georgia program known as “offender-funded” probation.

Georgia has a higher rate of people on probation than any other state in the country, nearly four times the national average. Legislation reforming probation was signed into law by Georgia’s Republican governor last year, giving the opportunity to thousands of poor people to terminate their probation before fulfilling the entire sentence even if they still owe fines and fees. This is part of a years-long effort to reduce the number of people on state supervision.

A side-effect of these reforms is that thousands of people are regaining the right to vote earlier than they would have. 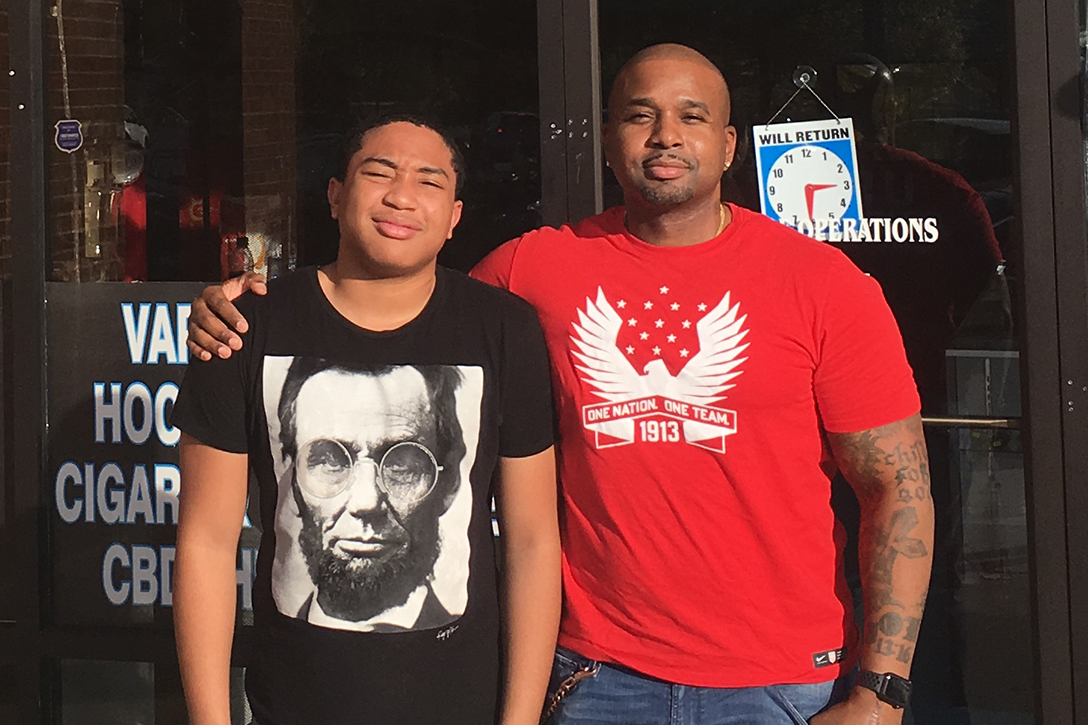 Donquel Barner is energetic and plain spoken. It would be hard to guess his age if it weren’t for some gray in his goatee and his 17-year-old son wandering in and out of the room.

He co-owns a vape shop with his girlfriend, teaches his children about their constitutional rights, and will immediately register to vote when his probation for a burglary conviction is up in January 2020, he said.

He is on unsupervised probation. A couple of months ago, he heard from the Fulton County probation office for the first time in three years. They called to tell him he needs to keep his payments coming as part of restitution for his burglary.

There’s no set amount he has to pay each month. “I don’t care how much,” Barner recalls his probation officer saying. “Just pay something. Twenty dollars.”

Under state law, as soon as his sentence is up, Barner will have no further obligation to pay the state. But for the next 14 months, he’ll have to keep paying out.

“I do not know how you can see that as anything other than a modern-day poll tax,” Nse Ufot, the New Georgia Project’s Executive Director, said.