For her latest documentary — Capturing the Flag — Emmy-Award-winning filmmaker Anne de Mare thought she was going to make a short film about “citizen engagement.”

She soon realized she was in more challenging territory.

“I didn’t set out to make a film about voter suppression,” de Mare told WhoWhatWhy. She had been disillusioned by the media coverage of the 2016 election, she said, which had focused on “so much negativity. There was such a top-down focus in all the reporting, it was like the role of the citizen … in our politics and government had been erased.”

But when the crew began work, what they encountered, she said, “made us understand we had a deeper, richer, more complicated story to tell.”

“Every election day,” the film begins, “thousands of Americans volunteer to help their fellow citizens vote. This is the story of four good friends who set out to do that work in 2016.”

Most of the documentary was shot just before and on Election Day 2016 in Fayetteville, county seat for North Carolina’s Cumberland County — and ground zero for voter suppression, after state lawmakers passed draconian election laws particularly harmful to minority voters.

But anyone expecting to see dramatic showdowns in Capturing the Flag between “good guy” volunteers and “bad guy” polling place officials would be disappointed.

Polling places were not depicted as bastions of racism. Instead elections officials seemed distracted, confused, and often ill-equipped to do their jobs. Sometimes they compensated for their lack of experience by enforcing petty rules.

The narrative unfolds as four volunteers — all lawyers from out of state — get their bearings and learn the ropes, trying to master the intricacies of state election law.

The four, each at a different location, set up shop outside their respective polling places, posting the signs they had made the night before: “Problem voting? Questions? Ask here.” 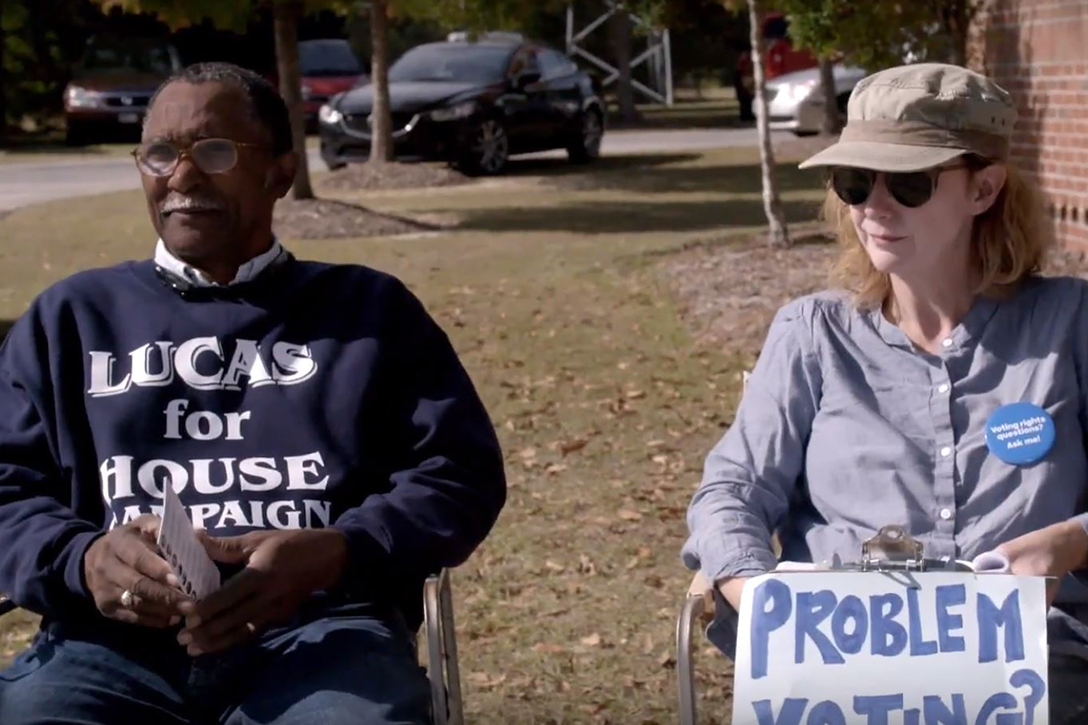 Capturing the Flag tells the story of four lawyers who offer guidance and and advice during the 206 election. Photo credit: 2018 Election Protection LLC / Providence Productions

Volunteers Laverne Berry and Steven Miller are the anchors of the film.

Berry, an African American, went out of her way to make friends with white polling workers and voters, making clear that she was there to offer help to anyone, regardless of their political views. She seemed to maintain cordial relations with all.

Things were rockier for Miller, who wasn’t even allowed to use the restroom at his polling place.

Voters rarely protested being denied the right to vote. They were confused, chagrined, and sometimes angry. Volunteers urged them not to give up, and helped them straighten out problems.

They had a few small victories: a Hispanic woman, determined to “vote for Hillary” and mistakenly informed that her registration was invalid because she had changed addresses, held her ground, and with Miller’s help, ultimately voted.

When an African American woman was erroneously told by a poll worker that it was useless to fill out a provisional ballot since it wouldn’t be counted, Berry urged the voter to return and demand a ballot, and then helped her fill it out.

But there were many other voters who left without achieving their goal.

When someone is told they’re at the wrong polling place or their registration is not in the system, they think they did something wrong, de Mare said. But after filming the entire day, she said, “You see person after person after person having similar problems.” And “how many different levels of failure there are in our election system.”

How many North Carolinians lost their right to vote in 2016? Capturing the Flag offers a startling glimpse into how many may have been disenfranchised. Berry was called to a polling place that evening where the camera showed long lines of mostly black voters; scores were ultimately turned away.

Brief background: North Carolina lawmakers had taken full advantage of the Supreme Court’s 2013 gutting of the Voting Rights Act Act: the ruling gave states with a history of racism the power to change election laws without getting advance permission from the Department of Justice. Civil rights and democracy groups were in the process of challenging these new laws.

Advocates also sued to address another vehicle for voter suppression: a state law that permitted any citizen to challenge the residency of any other citizen trying to register to vote. These challenges struck as many as 4,000 voters from the rolls in Beaufort, Cumberland, and Moore counties. Many of them were minorities.

On the Friday before Election Day, a federal district court judge ruled that the process was “insane” and ultimately ordered the state to restore the registrations of the purged voters in the three counties.

The state does not keep records on rejected voters. But in that particular polling place, a volunteer with a clicker had counted those who entered — and compared that number to the votes recorded that day.

The actual number of people who showed up at this single polling place versus votes cast is flashed on the screen, and it makes an impression: 1200 voters; 598 votes cast.

The figures are “really shocking,” de Mare said, “but then, everything that you’ve seen all day makes sense.”

“The thing that surprised me the most was the insidious nature of voter suppression now. It’s lots and lots of little cuts. It’s little barriers, misinformation, miscommunication, systemic failures on a systemic level and then some downright dirty tricks,” de Mare added.

After working more than 12 hours at the polls, volunteers returned to their crowded hotel room, only to look on in shock at the televised election returns for the 2016 presidential race. As they watched that scene play out on the screen, the entire auditorium seemed to cringe as the four friends learned the outcome of the presidential race.

The gentle Miller, who earlier in the day had happily taken pictures of voters who brought their children to the polls, had a meltdown.

“He has no boundaries, no understanding of democracy,” he shouted about victorious candidate Donald Trump. “We just elected Caligula.”

But he quickly walked back that anger, as his friends rallied to calm him down and cheer him up. That is the only time the political dimension of voting intrudes.

That lack of partisanship was deliberate, de Mare said. “This is not a polemic film, not a thesis film. It’s not an argument towards or against anything.” She acknowledged that the current assaults on the right to vote are coming exclusively from conservative Republicans, “but that hadn’t always been the case in our history.” Even now, she added, Democratic politicians don’t have a “great record” on gerrymandering congressional districts, another way to decrease the value of one person’s vote.

“We need to lift voting out of the partisan battlefield,” she said. “We need to say that certain institutions are important enough to support even if they give voice to someone who disagrees with you.”

To date, Capturing the Flag has been shown at local film festivals and college campuses, but de Mare is seeking wider distribution for it, particularly as the 2020 election rolls around.

She hopes that viewers will perceive it as she does: a “love letter to democracy.” And that they will be inspired to take small actions to make a difference.

It’s crucial that citizens vote in state elections, she said, noting that elections are administered by state officials under state laws. But there is also a place for homespun activism like volunteering to drive voters to the polls, or offering to be a poll worker or election monitor, she said.

Capturing the Flag changed her worldview, she said. “Voting never was my issue before. After making this film, it’s my issue now.