Georgia is one of only eight states in the country where people are asked their race or ethnicity on voter registration forms. The other states are: Alabama, Florida, Louisiana, North Carolina, Pennsylvania, South Carolina, and Tennessee.

Most of these states have a documented history of voter suppression, and several, including Georgia, are the setting for tight races in the upcoming elections with impacts ranging from the balance of power in Congress to the mapping of congressional districts in the coming years.

But why is this done, and when did it begin? Is it a good thing to know the races and ethnicities of voters, or can election officials and lawmakers use this information to suppress racial and ethnic minorities? And, should residents of these states be required to supply their race or ethnicity to be registered to vote — or is that requirement unconstitutional?

The practice comes from the “national mail voter registration form,” a document used in nearly every state and provided by the Election Assistance Commission (EAC) — an independent, federal agency. The question about race or ethnicity is number eight on the form; many nonprofit organizations use the application in voter registration drives. Instructions for filling it out in most states include the option, “Leave blank,” under the question. But in eight states that option is omitted; people are asked to supply the information “in order to administer the Federal Voting Rights Act.”

All eight states also include the question on their own voter registration forms.

The EAC provides no other information about the question on its website; several experts consulted by WhoWhatWhy were unsure of its origin or purpose. Several assumed it was due to Section 5 of the Voting Rights Act, which required certain states to prove to the Department of Justice that any proposed changes in election procedures would not trample on the rights of minorities. Most of those states were in the South, but they did not include Tennessee, and only parts of Florida were covered. In any case, Section 5 became moot after a 2013 Supreme Court decision.

The same experts agreed that the practice of gathering data from voters on race and ethnicity has not been widely examined, either by academics or lawyers involved in voting rights.

“It’s been overlooked,” said Allan Lichtman, history professor at American University and an expert witness in more than 75 civil and voting rights cases. 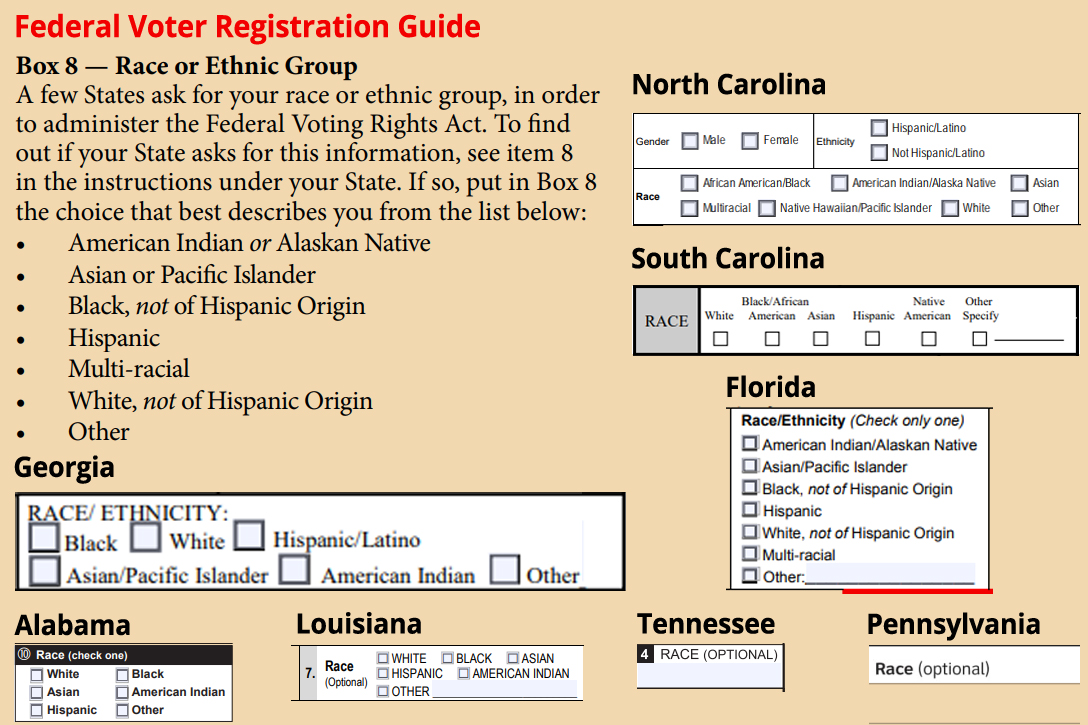 Eight US states include questions about race and ethnicity on the EAC’s national voter registration forms. Photo credit: Adapted by WhoWhatWhy from EAC (PDF) and individual state forms.

Even noted authors on the subject of voting rights in the South allowed that the question’s origins are murky. “I’ve been scratching my head about this,” said J. Morgan Kousser, history and social science professor at California Institute of Technology and author of Colorblind Injustice: Minority Voting Rights and the Undoing of the Second Reconstruction.

Regardless of the practice’s origins, continuing to include the question on voter registration forms could be a “double-edged sword,” Steven F. Lawson, noted civil rights historian, told WhoWhatWhy.

“Given the long history of voter suppression in the South, it wouldn’t surprise if this information was used to discriminate,” he said. “In Georgia, with the Secretary of State running the election and running for governor, where you have tactics like 53,000 registrations being held up … it might be a way to target black voters.”

“This could be a way for states to gauge when a state is becoming more minority and that could be a trigger for adopting more discriminatory measures,” Lichtman told WhoWhatWhy.

At the same time, “from a scholarly point of view, and in the African-American community as well, it could be helpful” to have such data, Lawson said.

Knowing the race and ethnicity of voters, Kousser noted, could also be useful in the courtroom, when fighting against voter suppression, including gerrymandered districts.

Potential voters who live in the eight states that ask for this information are faced with slightly varying versions of the question, on both the national and state forms. For residents of Georgia filling out the national form, question number eight says, “You are requested to fill in this box.” 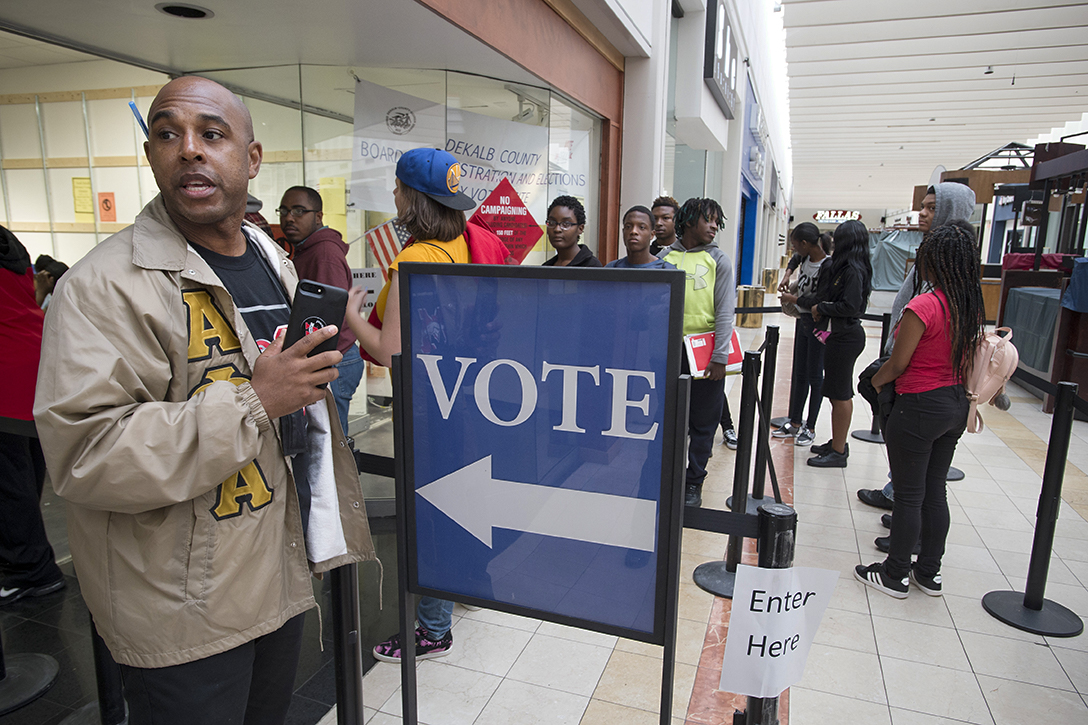 High school seniors who were eligible to vote and newly registered were escorted by an Atlanta-area group of community-service-oriented sorority and fraternity members to one of DeKalb County Georgia’s early voting locations in a Decatur mall, October 19, 2018. Photo credit: © Robin Rayne/ZUMA Wire.

This would appear to violate the National Voter Registration Act, Danielle Lang, senior legal counsel at the Campaign Legal Center, told WhoWhatWhy. “Part of [the Act] says that omissions on voter registration forms that are not material should not be reason for rejection,” she said. “For sure, suggesting that [people are] required to fill out this question is unlawful.”

“If a state is saying the application may be rejected if the question isn’t answered, it’s worth litigating,” said Lichtman, who has testified before Congress on race and ballot rejections.

At the least, “If states are suggesting that your form might be rejected if you don’t fill out the question, it might have a chilling effect, because of the history of discrimination,” he told WhoWhatWhy.

Much of the focus on voter suppression has concerned black voters. But since 1999, the question on race has included ethnicity, according to the Georgia Association of Latino Elected Officials (GALEO). Since Hispanics can be of any race, adding this category in the eight states that ask the question was an attempt to keep track of this population.

Still, Hispanics likely end up being undercounted in voter registration files, Jerry González, executive director of GALEO, told WhoWhatWhy. One reason is that Hispanics may check off both the race they identify with, and the “Hispanic/Latino” category, which then leads elections officials to classify these potential voters as “Other.”

For this reason, González, working with the University of Georgia and the National Association of Latino Elected Officials (NALEO), has used a method in several reports on Hispanic voters combining a database of 12,248 known Latino surnames, together with state data, to estimate the total number of Hispanic registered voters in Georgia.

In the most recent report, published last year, GALEO comes up with an estimated 244,190 registered Hispanic voters. The state’s figures: 162,670. That’s a 40 percent difference.

As to the propriety of including a question on race and ethnicity, Gonzalez said he sees it as a “net positive. We use it … to see the Latino community’s increase.”

In any case, only the Election Assistance Commission can answer the serious questions raised by this practice: 1) Why do only Georgia and seven other (predominantly Southern) states ask about the race and ethnicity of potential voters? 2) When did the practice begin? and 3) Are the Carolinas violating federal law by requiring voters to answer the question?

The commission’s own website says that its “responsibilities include maintaining the national mail voter registration form.” Unfortunately, the EAC did not respond to multiple queries about the form from WhoWhatWhy.