When Monica Bartley goes to the polls, she depends on her status as a longtime voter whom poll workers recognize. She maneuvers her wheelchair up a temporary ramp. The poll workers have already prepared the ballot-marking device she uses to complete her ballot. They no longer need to hover over her shoulder as she casts her vote, or insist on taking the ballot from her and inserting it into an optical scanner.

Thanks to several years of explanations from Bartley, they understand that her disabilities do not interfere with her ability to vote privately and independently, as is her constitutional right. But such accommodation is hardly the norm at polling sites across the United States. And Bartley takes a special interest in all this: She works for the Center for Independence of the Disabled in New York (CIDNY), where she leads a regular survey of polling sites across New York City. The surveys show that little has changed in the past 15 years.

Indeed, from doorways too narrow for a wheelchair to pass through to a lack of accessible voting technology, voters with disabilities face significant barriers on Election Day — and turnout suffers. Estimates suggest that if people with disabilities voted at the same rates as able-bodied citizens, 3 million more ballots would be cast, or about two and a half percent of the voting population.

What seems like a minor inconvenience to an able-bodied voter can be a make-or-break factor for a disabled voter.

CIDNY’s most recent survey, conducted during the November 2016 general elections, found that 78 percent of polling sites in New York failed to meet compliance with the Americans with Disabilities Act (ADA) despite current and comprehensive materials outlining federal standards. And New York is far from alone. A recent national report from the Government Accountability Office found that a majority of sites surveyed had at least one barrier to voting.

Moreover, the barriers at polling sites reinforce the isolation from and segregation within public life that people with disabilities can experience on a day-to-day basis.

“When you’re not part of the civic view, you’re ignored,” Margi Trapani, who also works for CIDNY told WhoWhatWhy. “We’ve known that separate is not equal for a very long time.”

That’s why pushing for vote-by-mail as a solution to accessibility issues falls short. If polling places are available to able-bodied people they need to also be available to people with disabilities. Not only are accessible polls a question of equal opportunity but, “there is symbolic, demonstrative value in going to a polling place with your fellow citizens,” says Douglas Kruse, a professor at Rutgers University whose work focuses on the disability community. 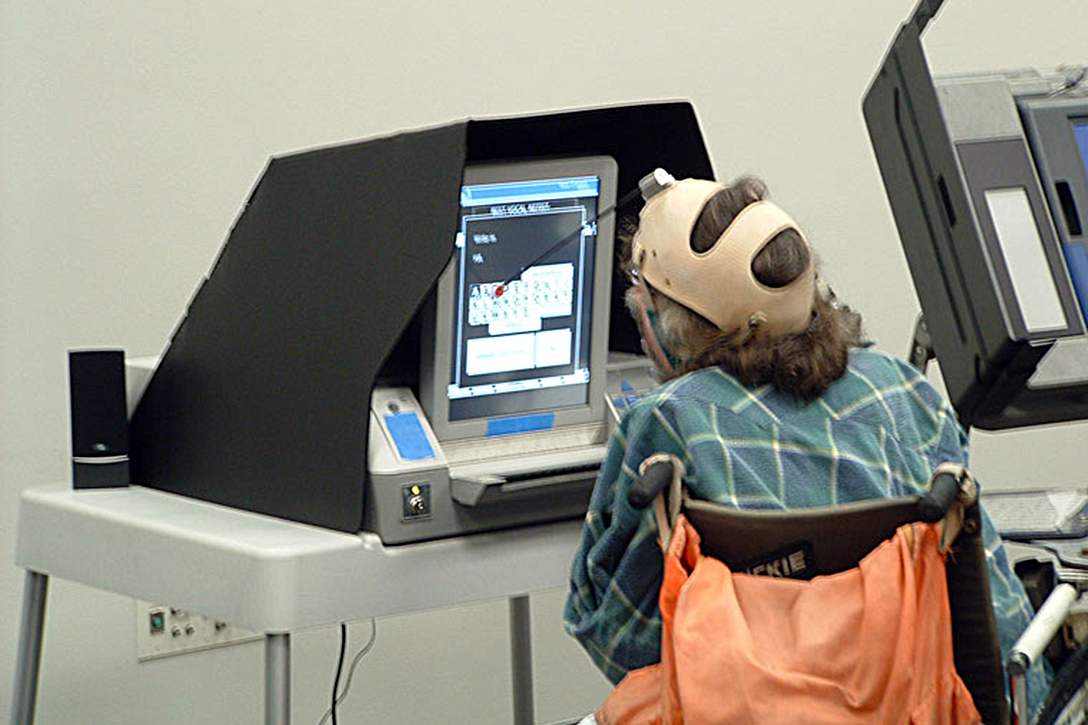 His research, which he conducts with his partner in life and work, Lisa Schur, also a professor at Rutgers, has demonstrated a “disability gap” in voter turnout — between six and seven percent fewer disabled voters make it to the polls than able-bodied voters. While accessibility barriers likely contribute to low turnout, neither he nor Schur can point to a direct cause and effect. Their research has demonstrated, however, a likely correlation between employment and turnout among disabled voters. Schur and Kruse chalk that up to a social pressure to participate in elections that can come with being more integrated into mainstream society.

Accessible machines are designed such that voters with disabilities can cast their vote independently, but not all poll workers understand that or are willing to accept it. Training poll workers on how to assist voters with disabilities without encroaching on their privacy and independence has proven among the more significant challenges, Trapani said.

For example, a voter who is blind might need to be helped to the machine and then have the machine opened for them. But the poll worker does not stand behind the voter, watch them vote, and then walk off with the ballot — all of which violate the right to a private vote. Voters with mental disabilities face an additional slew of barriers, right down to state laws that prohibit participation in the electoral process.

“It’s attitudinal,” Trapani said. “And that’s an issue that comes from the top. The state and the city have to be very clear that this is a priority that people have a right to come in like everyone else [to vote].”

Election officials haven’t made it a priority to ensure that the polls are accessible to all voters, nor have elected officials sought to develop platforms that recognize and address the diverse issues that people with disabilities face. Part of the reluctance to address accessibility issues at the polls stems from a pessimistic resolve — not everyone sees people with disabilities as an important voting bloc, says Schur.

“We don’t see ourselves reflected in various forms of political participation,” activist Alice Wong told WhoWhatWhy by email. “There’s a lack of engagement and involvement of people with disabilities in the political and public space.” With fellow disability rights activists Gregg Beratan and Andrew Pulrang, Wong started #CripTheVote during the 2016 presidential elections.

Through the nonpartisan online movement, the organizers hope to start conversations about and encourage political engagement around the issues the disability community faces. That means not only encouraging political participation on the part of people with disabilities, but also highlighting political issues — like threats to the Affordable Care Act and cuts to Medicaid — that have an outsize impact on people with disabilities.

Despite federal laws that require compliance, change has been slow to come — even when the courts get involved. In 2010, Disabled in Action, Disability Rights Activists, and the United Spinal Association filed a lawsuit against the New York Board of Elections for discrimination against voters with disabilities. CIDNY’s surveys figured in the lawsuit, though the organization was not a plaintiff in the case. At the time, CIDNY was under a state contract involving funds from the Help America Vote Act, said Trapani.

After several years of litigation, the United States Court of Appeals for the Second Circuit found unanimously that the barriers at New York City’s polling sites amounted to active discrimination. The decision required the Board of Elections to assign a poll worker to ensure compliance with the Americans with Disabilities Act at every site in New York City. CIDNY was responsible for training those workers and continues to provide accessibility resources to polling sites citywide.

The responsibility falls on state and local governments to ensure accessibility, and a lack of coordination and consistency plagues the system. Election officials could address the barriers to voting through a series of relatively minor changes and a little bit of proactive accommodation — better signage and adequate ramps are not massive investments. But, as Kruse says, “If you’re choosing between cutting staff for some program that people use every day and making some adjustments to polling places that people use every two years, it’s lower on the priority list.”

In New York City, where public schools account for about half of polling sites, upgrades often necessitate the involvement of both the Board of Elections and the Department of Education — only compounding the administrative burden and slowing the pace of change. To CIDNY, that’s no excuse. “Everybody says it’s someone else’s responsibility,” Trapani said. “They need to stop pointing fingers and do it.”