Incorrect translations, hard-to-find details, gibberish, or sometimes no information at all.

That’s what many Spanish-speaking American voters encounter when searching for online voting materials in Spanish.

In most cities, counties, and states across the nation, there is no federal requirement to present information in anything other than English. But for 263 jurisdictions — the vast majority of which are counties — federal law requires that voter information be presented in a minority language, with Spanish being the most common. California, Texas, and Florida are the only states required to present statewide voter information in Spanish.

WhoWhatWhy has examined a number of official government websites across the country, looking at how well English-language voter information is translated into Spanish, how often it’s done, and if there are any major discrepancies between the two.

For Texas, California, Florida, and a number of counties in many states, providing accurate information in a minority language is a federal requirement.

What we discovered is that translated material is often hard to find and sometimes is nonexistent. Also, much of what does exist is poorly translated.

In a closely contested election, that could make all the difference.

In some instances, certain information just doesn’t get included in Spanish.

For example, in Texas — where 40 percent of the population is Latino — the list of voter rights presented in English on the VoteTexas.gov website is missing the two final items in the site’s Spanish translation.

Missing: (1) voters have the right to vote once during the early voting period; and (2) they can file administrative complaints with the secretary of state concerning violations of federal and state voting regulations.

On the California Secretary of State website, a section on “who can vote” includes information on how to pre-register to vote in English, but that part is missing when you click on the Spanish equivalent.

Another example: the PDF version of the English-language New Mexico voter registration form has a field titled “Address Where You Get Your Mail,” but that same space is left entirely blank on the Spanish version.

The most glaring examples of poor translations are on sites like that of Florida’s Election Department, which uses Google Translate for the Spanish version. While much of the content on the site is easily handled by Google’s engine, larger blocks of texts don’t fare as well.

And some phrases just get lost in translation. 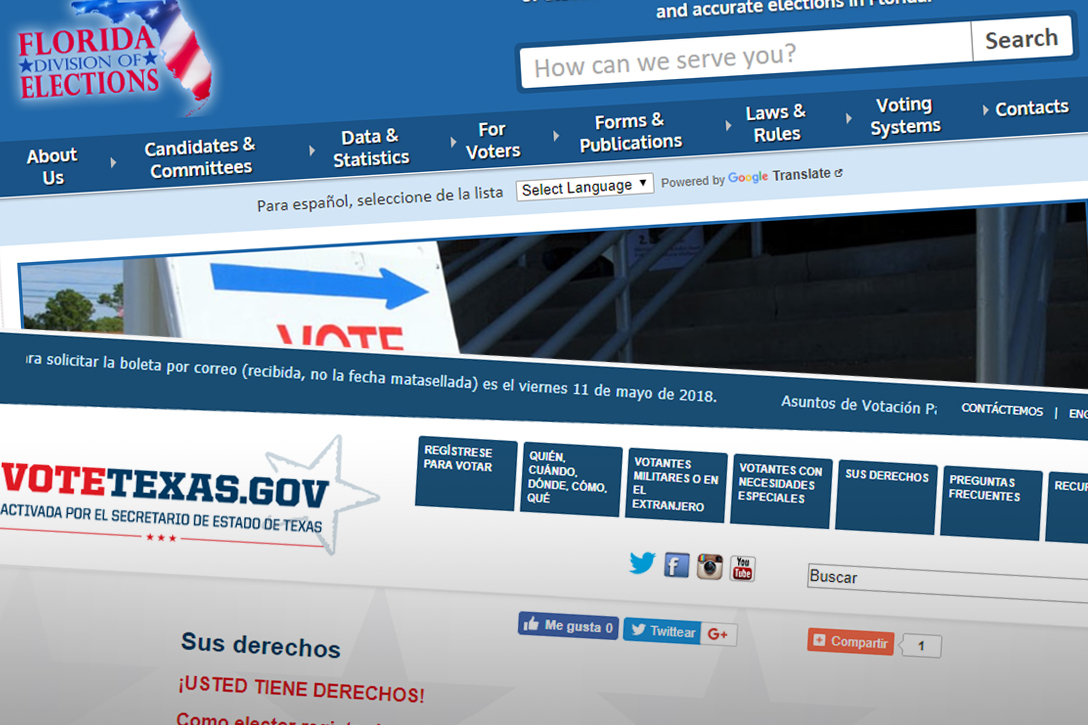 Here’s a small example found among many similar mistakes on the site: “Since Florida is a closed primary state” is translated to “Desde Florida es un estado de primarias cerradas.”

The Spanish translation here is nonsensical, essentially stating: “From Florida is a state of closed primaries.”

On the New Mexico Voter Bill of Rights page, a line that states “Vote by emergency paper ballot if the voting machine is broken,” is translated into “De votar mediante papeleta para votar está funcionando.” The Spanish translation reads, nonsensically: “To vote by paper ballot to vote is working.”

Hispanics remain notoriously underrepresented on Election Day; while other factors may contribute to this balloting shortfall, the lack of reliable election information in Spanish clearly plays a role.

On California’s Spanish-language voting website, a section of election dates has headers in Spanish, but everything inside the grid is in English. To make matters worse, the link at the bottom of the page to the California voter guide in Spanish is a dead link that sends you to a “Not Found” page.

Sophia Lakin, a staff attorney for the ACLU, said such examples “raise serious concerns that we may be instituting a prohibitive English literacy test for registered, qualified voters.”

“In some cases, this misinformation may serve as an insurmountable bar to the ballot box, and voters may not even know that they are being disenfranchised,” she said.

“If they do realize that the information they’re receiving is incomplete or incorrect, then they may very well feel marginalized and disengaged from the political process. I have no doubt this depresses turnout and general political and civic engagement.” 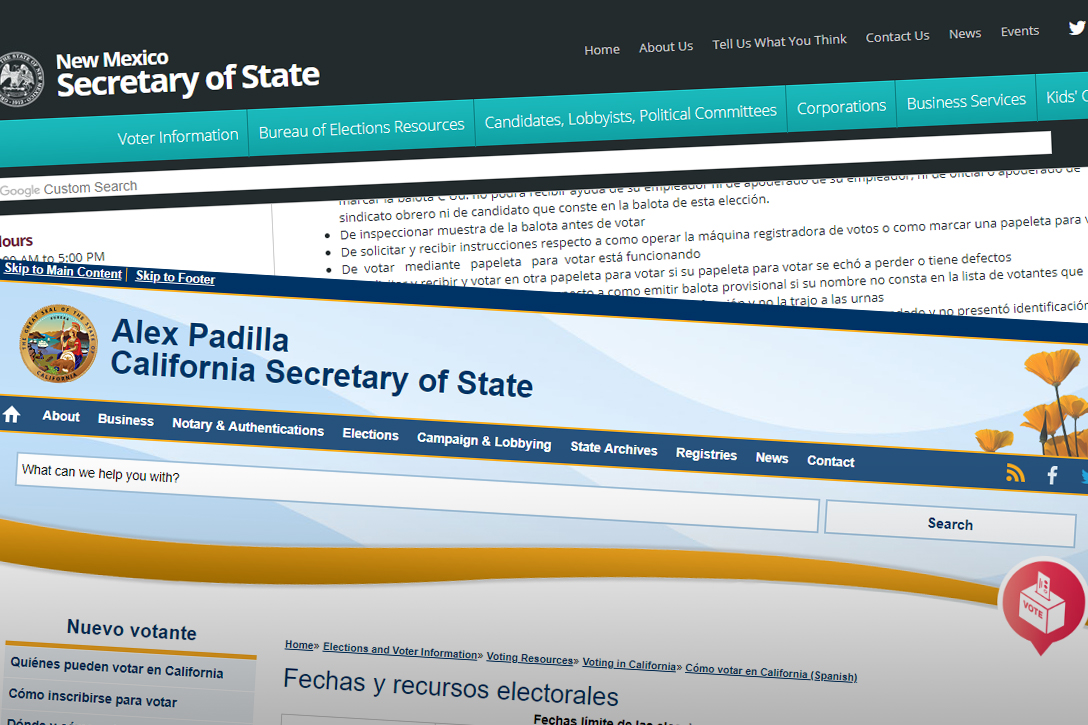 For Texas, California, Florida, and a number of counties in many states, providing accurate information in a minority language is a federal requirement. Specifically, Section 203 of the Voting Rights Act states that “materials and assistance should be provided in a way designed to allow members of applicable language minority groups to be effectively informed of and participate effectively in voting-connected activities; and … that an affected jurisdiction should take all reasonable steps to achieve that goal.”

The requirement applies to “voting notices, forms, instructions, assistance, or other materials or information relating to the electoral process, including ballots.”

For some smaller counties that run a threadbare operation, translating information into Spanish can be a daunting task.

In the Census, Immigrants Count Too

Much of the information concerning English proficiency and citizenship status comes from the United States Census’s American Community Survey — an ongoing data collection project that includes a question about citizenship — although the data is taken from a relatively small sample of the US population. 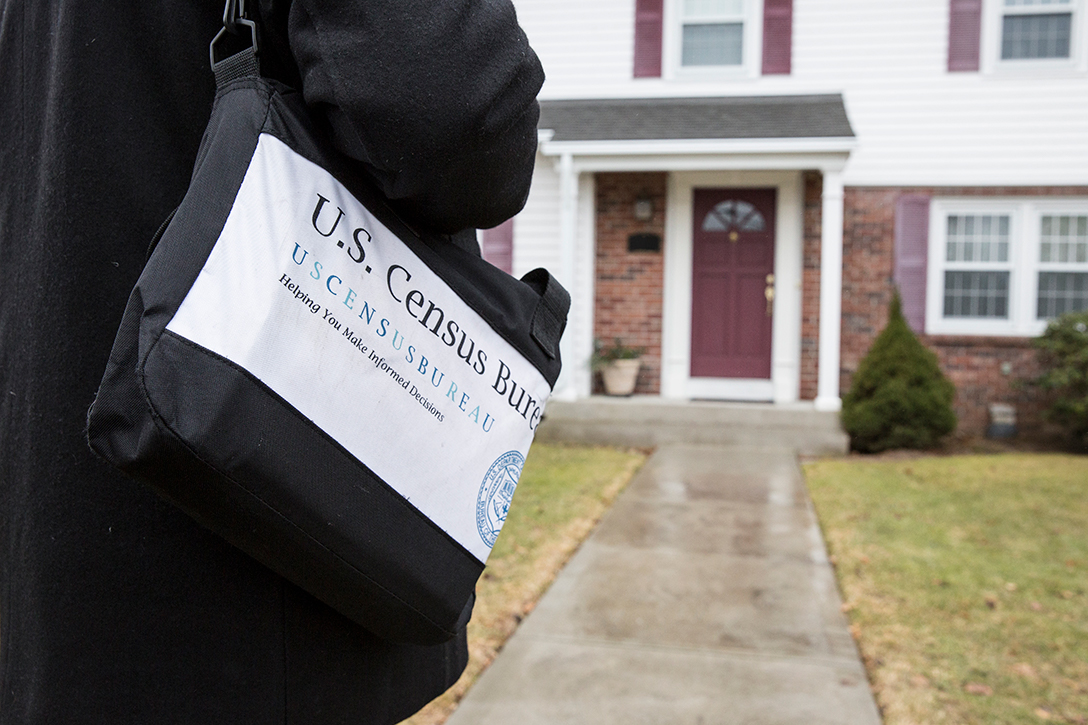 A question inquiring about citizenship status may be included in the full 10-year census — which is supposed to count every person residing in the United States — coming up in 2020. This would mark the first inclusion of the citizenship question on the form since 1950.

The plan to ask census respondents whether they are citizens was formulated by the Justice Department, with support from the White House. Many states, counties, and cities have joined a lawsuit against the administration of President Donald Trump, on the grounds that including a citizenship question on the census form will dissuade many people from filling out the form, resulting in a serious undercount of residents in certain areas.

An undercounted area could receive less federal aid and less representation in Congress.

The relevant portion of the Constitution (section 2 of the 14th amendment) mandates “counting  the whole number of persons in each State.” This has been interpreted to include citizens, non-citizen legal residents, non-citizen long-term visitors, and undocumented residents, excluding only “Indians not taxed.”

Trump has taken a hardline approach against illegal immigration. Supporters of the citizenship question say it will help identify if some are voting illegally. The president has claimed many times that “millions” cast illegitimate ballots in 2016; however, there is no evidence to suggest this is true.

Lakin believes adding a citizenship question to the census could be devastating to certain areas with a high percentage of immigrants.

The roughly 54 million Hispanics in the US make up 17 percent of the population — the biggest and fastest growing minority in the country.

Yet, Hispanics remain notoriously underrepresented on Election Day; while other factors may contribute to this balloting shortfall, the lack of reliable election information in Spanish clearly plays a role.

A 2011 study published in the American Journal of Political Science found that the availability of Spanish-language ballots resulted in higher voter turnout among those with limited understanding of English.

Groups such as LatinoJustice and the Mexican American Legal Defense (MALDEF), have worked to ensure election materials are available in Spanish.

Kira Romero-Craft, a senior attorney at LatinoJustice, said many Latinos stay out of politics because of the stereotypes they see being used by media and entertainment outlets.

“I think the belief is that there is never going to be representation of the community,” she said. “I think a lot of what is happening is driven by the perception that we see of ourselves in the media … where is our representation, in terms of politics and entertainment?” 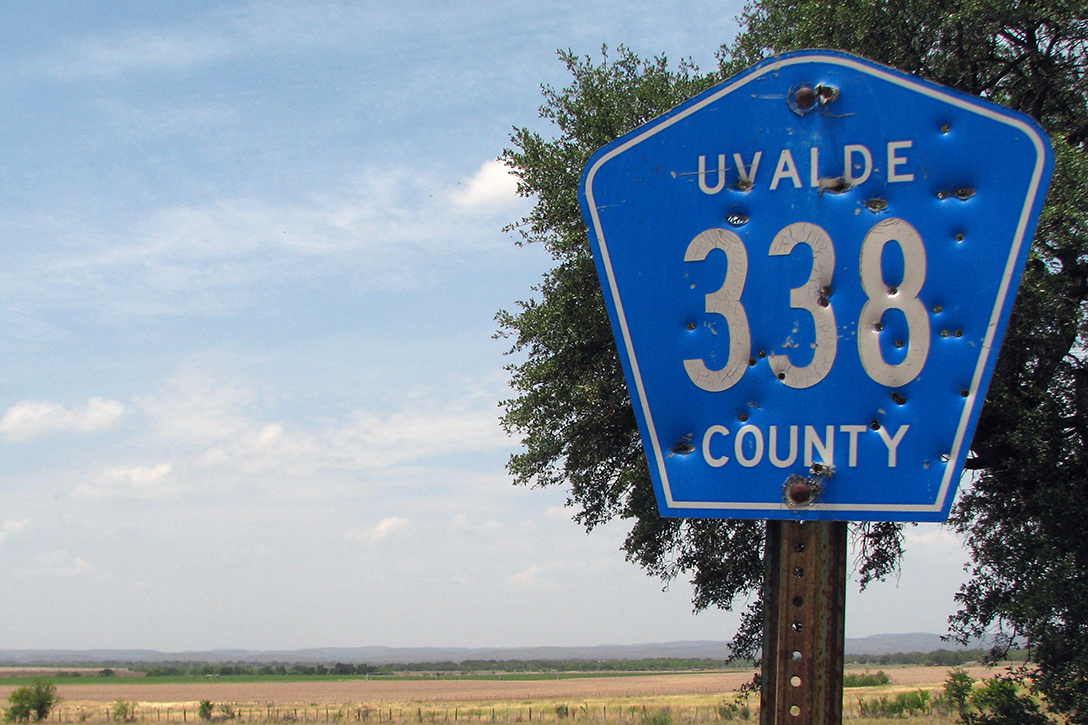 While all of the aforementioned translation examples are from state-run websites, the vast majority of governmental bodies covered under Section 203 are counties. And for some smaller counties that run a threadbare operation, translating information into Spanish can be a daunting task.

Uvalde County, an area of Texas covered by Section 203 that is about 65 percent Hispanic, has hardly any election information on its website in Spanish — with sections for voter registration, application for a ballot by mail, and election information only in English. However, sample ballots for all precincts are available through the site in both English and Spanish.

The work necessary for counties to comply with federal law involves more than just translating a few documents; it may require recruiting and hiring bilingual office staff and poll workers. Besides posting Spanish translations on a website, counties must also provide hard copies of election information, official forms, and ballots.

Ernest Herrera, a Texas lawyer who works with MALDEF to monitor the 88 counties in the Lone Star State covered under Section 203, said many counties feel overburdened by the requirement to translate, which is why he tells many counties to at least provide links to information in Spanish from the Secretary of State’s office.

One of the areas in which MALDEF has worked to improve bilingual services is in Texas’s volunteer deputy registrar system.

Under the Texas election code, someone can register another person by acting as a deputy registrar — essentially filling out a form for someone else (using information provided by that person) and sending it in to the corresponding county. The process allows civic groups and organizations to register a number of voters at once by streamlining the process.

But deputy registrars use a specific voter registration form that comes with a tear-off stub receipt. The challenge, said Herrera, is that the availability of such forms in Spanish is “very spotty.”

“From what we understand, in most counties, the forms are there,” he said, but whether county officials provide them when requested depends on the county.

Nonetheless, Herrera said, the state has improved in providing the forms, and now even offers training to deputy registrars in Spanish, which MALDEF had urged them to do.

If individual counties fail to comply with federal law, they put themselves at risk of litigation.

LatinoJustice was successful in a lawsuit against Volusia County filed in 2008, claiming that the county discriminated against Puerto Rican voters by not providing ballots and voter information in Spanish.

The Department of Justice has also filed a number of suits over the years against different governmental bodies for voting language infractions. For a list, click here.

Lakin, the ACLU attorney, said keeping tabs on infractions of voting rights across the country is a daunting task.

“We’re always concerned about voter suppression, and it happens unfortunately all the time,” she said. “Poll workers are going to do what they do, and if you’re not sure of what your rights are, you don’t know if someone is disenfranchising you.”

Lakin noted that complaints can be brought to the attention of the Justice Department, but she doubts the likelihood of enforcement, given the current political climate.