How does that old saying go?

“Fool me once, shame on you.

Fool me twice, shame on me.”

What do you say when you’re fooled a third time? Because that’s exactly what happened this week when the Republicans passed something they call the “Tax Reform, and Jobs Act.”

So here we are again, folks. At least here I am again. Because for me this is the third time in the span of some 36 years, a time that consumed nearly my entire journalism career. I saw the Ronald Reagan tax cuts and the George W. Bush tax cuts. And I saw the social and fiscal wreckage left behind by both.

When Reagan’s second term ended he had little to nothing to show for his tax cuts. (See chart below) The economic growth did not explode as promised; job growth didn’t either. The only thing that had exploded was the federal deficit due to lower tax revenues.

When Reagan’s successor, George H.W. Bush, took office in 1989, he inherited a budget debt of $2.8 trillion, three times larger than it had been when Reagan took office 8 years earlier.

Another Reagan promise was to slash regulations, which he did, most memorably on the nation’s once conservative Savings and Loans. Eight years later George H. W. Bush found himself with a Savings and Loans industry in near total collapse. Estimates were it could cost nearly $200 billion to replace depositors’ money and save what was left of the industry.

Which is why, despite his campaign pledge — “Read my lips; no new taxes!” — Poppa Bush had to raise taxes. He simply had no choice. Reagan’s tax cuts had not boosted revenue, had not boosted job growth and the country wasn’t just broke, but nearly $3 trillion in the hole.

In September 1990, two years into George H.W. Bush’s first term, Bush announced a tax plan that would cut $500 billion from the deficit over five years, in part by raising “luxury taxes” on items including yachts and pricey cars, among other tax hikes. “The time for politics and posturing is over,” he said, “The time to come together is now.”

It was a rare profile in courage that would cost him reelection.

One would like to believe that was a learning experience for Republicans. Tax cuts, in and of themselves, are not the miracle potion they peddled on the stump. In fact, huge tax cuts can do far more damage than good. It’s a truism that most of the time, “the only difference between a medicine and poison is in the dosage.”

But Republicans really had nothing else left to run on. They certainly had no progressive pro-growth ideas. In fact, they hated that kind of stuff — too close to “socialism” for their tastes. And their favorite old boogeyman, the Soviet Union, had collapsed. So being “strong on defense” just didn’t seem to return the same bang for the campaign buck it once had out in the hinterland.

So they revisited their last victories and doubled down on Reaganomics, once again claiming that lower taxes would stimulate the economy and hyping the already disproven theory that economic growth will grow revenues enough to more than pay for their tax cuts. And along they way, the goodies created will eventually “trickle down” to ordinary folk.

When George W. Bush ran for his father’s old job, he faced a headwind caused by his father’s broken “Watch my lips, no new taxes” promise. So W. doubled down with a fury on his tax cut promises by making clear that he was no H.W. Bush.

And once again, as if nothing had been learned from the failure of Reagan’s tax cuts, Republicans embraced George W. Bush’s $1.2 trillion tax cuts with enthusiasm and hearty rounds of self-congratulation.

Bush had something his father lacked though. Due to his predecessor, Bill Clinton, who raised the top tax rate in 1993 to 39.6 percent, Bush inherited a forecasted $5.6 billion budget surplus, which at least temporarily blunted the impact of lost revenue.

I wrote an Op Ed at the time for the Sunday San Francisco Chronicle:

As with Reagan’s tax cuts, less money is flowing into the federal treasury, new revenues have not materialized and defense spending has soared. In less than two years, the $5.6 trillion tax surplus forecast by the Congressional Budget Office in 2000 has vanished. The national Platinum Card is back in use….One might think such a dismal batting average would sober up even the most rabid fiscal jihadist. On the contrary — even though a recent New York Times/CBS News poll shows that two-thirds of the country thinks the money from the now-vanished federal surplus should have been used to help save Medicare and Social Security, not subsidize a trillion-dollar tax cut — conservatives see their historic mid-term victory last month as a mandate to finish the job.

Of course, with the aid of hindsight, we now know exactly the effects of the Bush tax cuts. We saw the end results in the near-crash of the entire US economy and much of the world’s in 2008 — and in the “great recession” that followed. 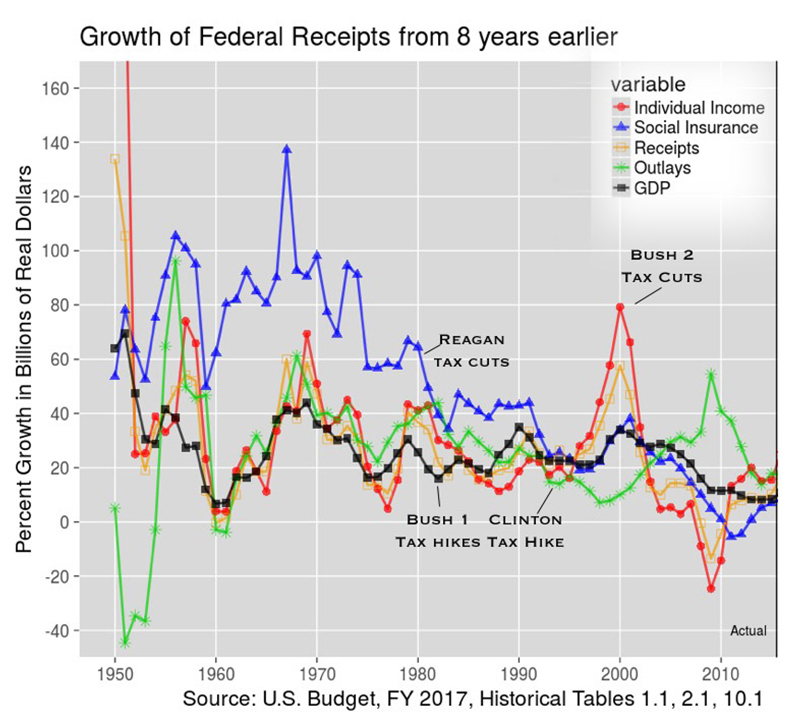 And, not only did each of these Republican tax cuts fail to produce either enough revenue to cover them or more and better paying jobs, they only exacerbated the already growing inequity in how our national treasure is dispersed. The gap between the rich and poor expanded exponentially each time: 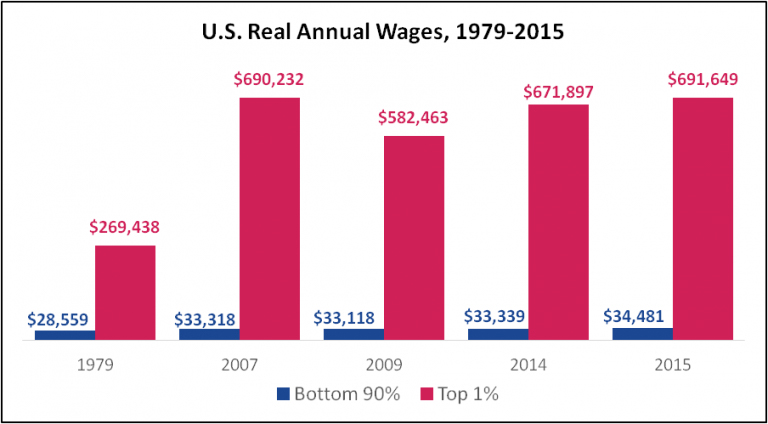 And now it’s going to happen again. Republicans, with nothing else to show for their first year in control of all branches of government, and fearing anger from their hyper-conservative voting base in 2018, pulled this old trick back out of their… well… let’s say “hats,” just to be civil about it.

Again the federal deficit, which Republicans until recently decried in apocalyptic terms, will balloon to new heights. With employment already at record levels, there’s really little room for more job growth. And if there were room, with Trump’s anti-immigrant pogrom at fever pitch, there would not be enough workers to staff a rush of new jobs. And with the stock market at record levels already, and worries of a developing bubble, well, what could possibly go wrong there. The answer can be found back in 2008.

As Bette Davis once said with so much panache, “Fasten your seatbelts, it’s going to be a bumpy night.”

One response to “The GOP Killing of the Golden Goose 3.0”