Already it’s been estimated by researchers that virtually all shellfish, and one-quarter of all fish, contain traces of plastic.

Every year about 300 million tons of plastic are produced and eight million tons wind up in our oceans. That’s the equivalent of over 500 trillion plastic water bottles. If you were to stack these bottles one on top of the other, you would be able to make two full trips from Earth, to the Moon and back.

But the problem is not only the millions of water bottles humans consume and discard each hour, but also the plastic we cannot see.

Microplastics are considered to be any piece of plastic that is under five millimeters in length. This also includes small particles like fabric and the plastic microbeads used in facial cleansers.

These particles are found in our oceans, on our beaches, and pretty much anywhere else there’s water.

The plastics that wash up on our beaches or end up in massive floating garbage patches come from bottles, bags, containers, straws, shipping materials and other quick-use products that break down over time and in turn become a home for harmful substances.

“Toxic chemicals adhere to plastics very easily,” Emily DiFrisco, Director of Digital Strategy of the Plastic Pollution Coalition, told WhoWhatWhy. “Even in the ocean, PCBs, DDT, pesticides, flame retardants, mercury and other organic pollutants can be absorbed by plastic in the ocean.”

DiFrisco, whose group aims to halt the tide of plastics that make their way into the environment, added that the chemicals pass into animals we consume and, as a result, enter our bodies.

It is believed that these chemicals can be found in almost all humans, including newborn babies.

We as producers, consumers and disposers, are directly to blame. More than half the plastic we use everyday, according to the Plastic Oceans Foundation, is used only once.

Infographic from NOAA depicting the various ways plastics end up in the ocean and form clusters of dangerous marine debris. Photo credit: NOAA

Plastics that enter humans can cause cancer, liver damage and reproductive problems. The chemicals disturb the way human organs function and can create a plethora of health issues. Fish who ingest plastics are more than likely experiencing health issues as well. By eating those fish, we are taking on their issues, and creating more for ourselves.

Plastics are not the only pesky material being dealt with; microfibers from clothing also have been found in marine life. When we do laundry, small fibers come off our clothes. They are far too small to be caught in filters, and wind up being washed out into open waters, where the fibers are mistaken for food or algae and eaten by fish and the smallest creatures in the ocean. They then make their way through the food chain and eventually, wind up killing the marine life that consumes them — or on our dinner plates.

Five massive patches of garbage reside in our oceans. One in particular — the Pacific Garbage Patch — now is twice the size of the state of Texas; over five hundred thousand square miles of the Pacific ocean are covered in a layer of plastic. Granted, these patches are not solid islands of garbage, but, they are substantial enough that they cover large sections of the ocean’s surface.

How to Reverse This Deadly Trend?

So what can be done about this problem?

“There are a number of different approaches the government could take,” says Tisha Brown, an oceans campaigner for Greenpeace UK. There is a fair amount of speculation and controversy as to whether we can make drastic enough changes to the way we live that we could repair the damage that we have done — and nurse our Earth and its creatures back to health. 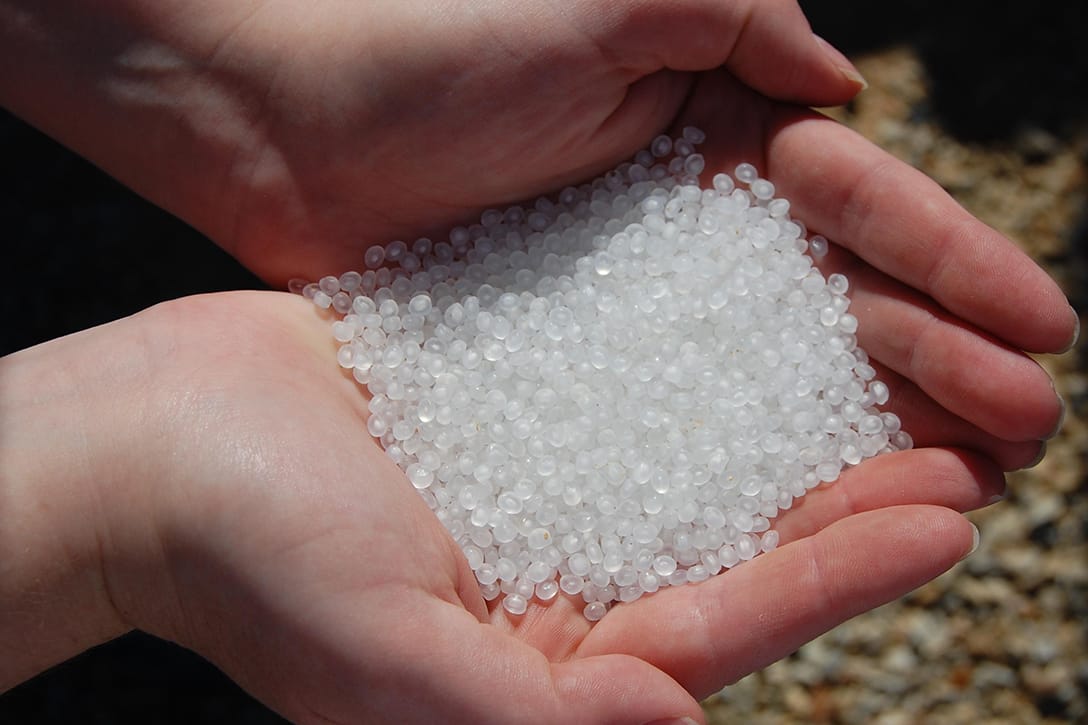 Though pollution is a formidable problem, many individuals, companies and organizations are making efforts to bring about change. In 2015, President Barack Obama signed the Microbead Free Waters Act to force cosmetic companies to remove microbeads from their products. By next July, products containing microbeads will no longer be sold in stores in the United States.

This year the United Nations even declared “war” on the trillions of pieces of plastic in the sea.

The United States is not one of the 10 countries that joined this campaign.

The United Kingdom also has not joined the campaign, but it has imposed a ban on microplastics stronger than any other country in the world: microbeads are banned there and citizens have been urged to use less plastic.

“To achieve a fully comprehensive ban covering all products that go down the drain, we need companies to be much more transparent about when their products contain harmful microbeads,” Louisa Casson, a campaigner for Greenpeace UK, told Independent Online.

Restaurants are among the many public places that are joining the fight to reduce the amount of plastics we use, for example by joining the “Refuse the Straw” campaign.

The Plastic Pollution Coalition says that every day in the United States, there are an estimated 500 million plastic straws used, mostly one time only. Almost all of these are likely disposed of in the wrong way.

Though many attempts have been made to clean up our planet and recycle materials, Tisha Brown from Greenpeace says this is not enough.

“Recycling should always be a third choice when dealing with waste, after reducing and reusing, and those two superior options need to be prioritized,” Brown told WhoWhatWhy.

She also states that “ditching single-use disposable items in favour of durable, reusable alternatives,” should be the main focus of consumers and producers of plastics alike. 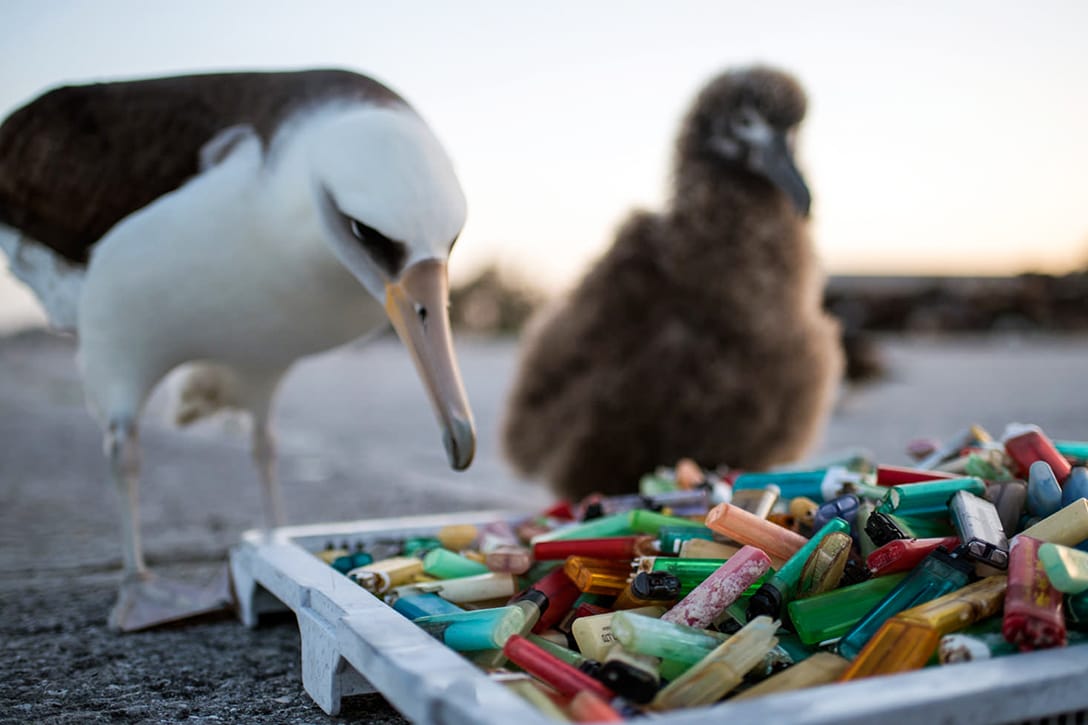 “Ocean plastic pollution is a global emergency, it is everywhere from the Arctic Ocean at the top of the world, to the Mariana Trench at the bottom of the Pacific,” Brown states.

“We ALL can do something to stop plastic pollution and it’s toxic impacts on animal and human health, our oceans and waterways, and the environment,” says DiFrisco. “Take the first step by thinking reusable and not ‘disposable.’ Bring your own bags to the market, refuse plastic straws when you order a drink, and bring your own reusable water bottle.”

Hawaii’s geographical location has made it a magnet for plastics lingering in the Pacific. Almost all of Hawaii’s coastlines have debris coating their once pristine sands; the Northern beaches in particular are taking the brunt of it. The Department of Land and Natural Resources did a study on Hawaii’s main islands’ beaches that found more than 20,000 pieces of plastic scattered across the sand.

The state maintains that, though its beaches are far from clean, most of the trash that winds up on Hawaiian shores comes from the US mainlands, or from visitors. Companies around the world, after all, go to Hawaii and purchase the fresh water there to sell to customers — indicating that Hawaii has no problem taking care of its resources.

To try and keep up with the seemingly endless amounts of garbage that collect on their shores, residents have created the Sustainable Coastlines Hawaii organization. This organization is “inspiring local communities to care for their coastlines through hands-on beach cleanups.” 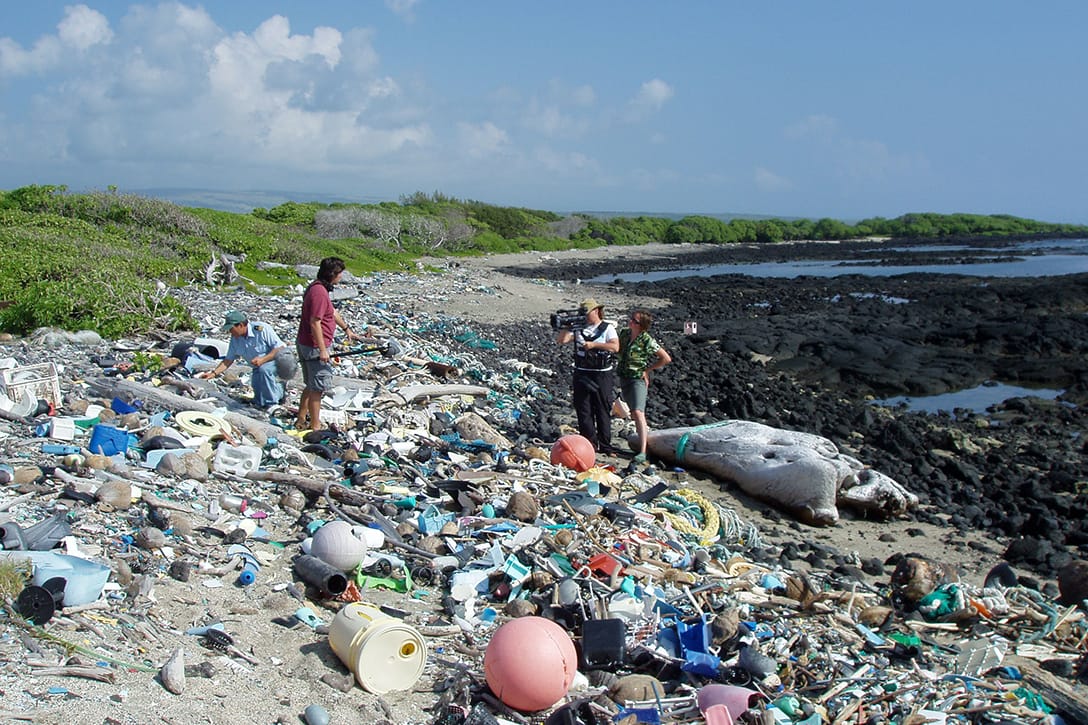 On a cleanup on the main island of Hawaii’s beach, Kamilo, in November of 2014, 35 people collected over 3,000 pounds of plastic in a single workday — fishing nets, toothbrushes, kitchen materials, buoys from fisheries, bottle caps and almost 7,000 other miscellaneous pieces of plastic.

But as quickly as volunteers pick up the trash, more of it washes right back up.

Plastics are not a new threat to our environment and our lives, and they certainly are not going away. They have become a part of our everyday lives and sadly, have become part of us as well. So the next time you use a straw, finish a bottle of shampoo or toss that plastic bottle into the trash, remember — that may not be the last time you see it.

5 responses to “Plastic Ocean: From Thriving Ecosystem to Trash Dumpster”