Nick Hilden is a WhoWhatWhy freelancer who is covering Catalonia’s struggle for independence. Here are his thoughts from the ground on the events that have been unfolding in Spain.

The future of Catalonia is uncertain following an unsanctioned independence vote, violent police actions trying to stop that referendum and massive rallies from supporters as well as opponents of a split from Spain.

Pressures are mounting, both economic and cultural. Prominent companies have begun announcing their exit from the region due to political uncertainty. At the same time, the country’s king is delivering condemning proclamations while standing in front of a portrait of Charles III, who essentially banned the Catalan language in 1768.

With the threat of escalating violence looming, Catalonia is looking for heroes. And, once again, the firefighters of Barcelona, the capital of Catalonia, stepped up. 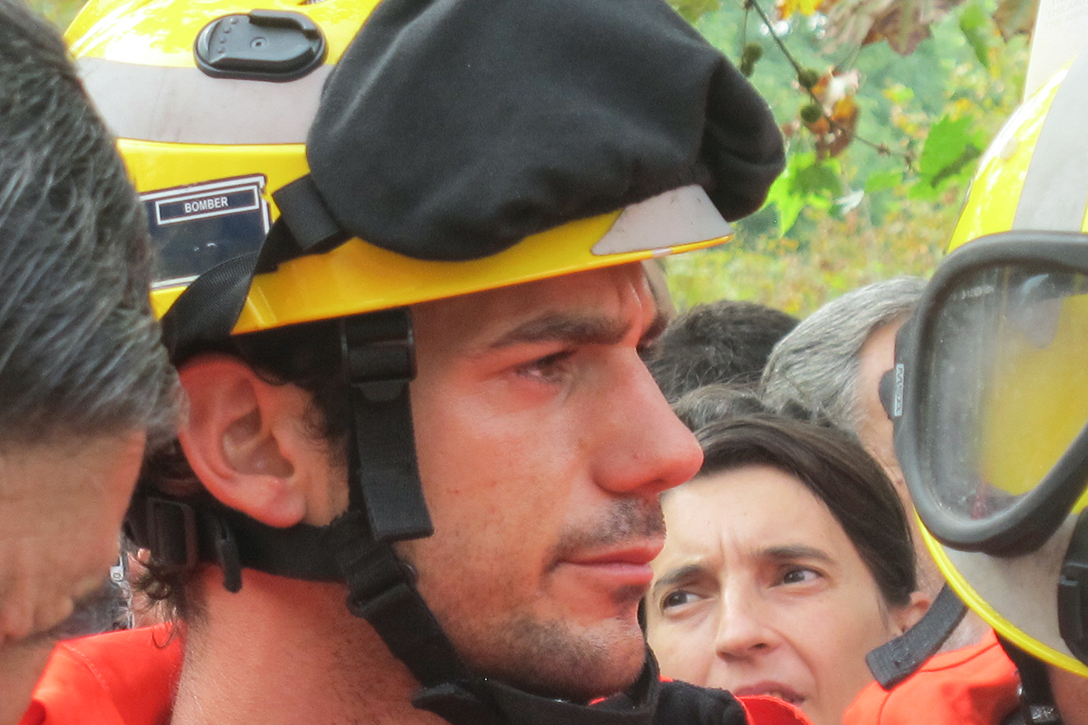 There is a lot to unpack here, from the history of this conflict to the unexpected reason for the ennobling of the firefighters. All of this requires some explanation. 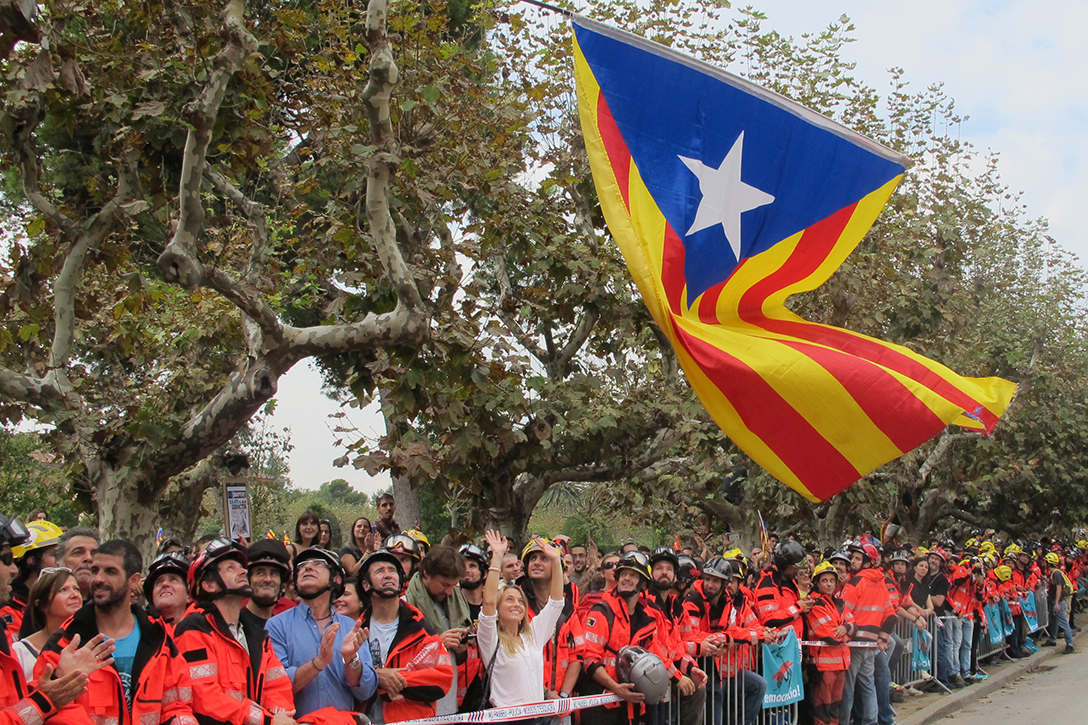 The long version of that explanation could (and does) fill up several books as its roots burrow deep into the Middle Ages. The short version is rather straightforward. For a long time now, there has been friction between the semi-autonomous Spanish state of Catalonia and Spain. The complaints of pro-separatist Catalans are several, but the most oft-cited is the fact that they put more into the Spanish tax system than they get back. They have their own culture, their own language and a significantly more progressive agenda than the national government in Madrid. 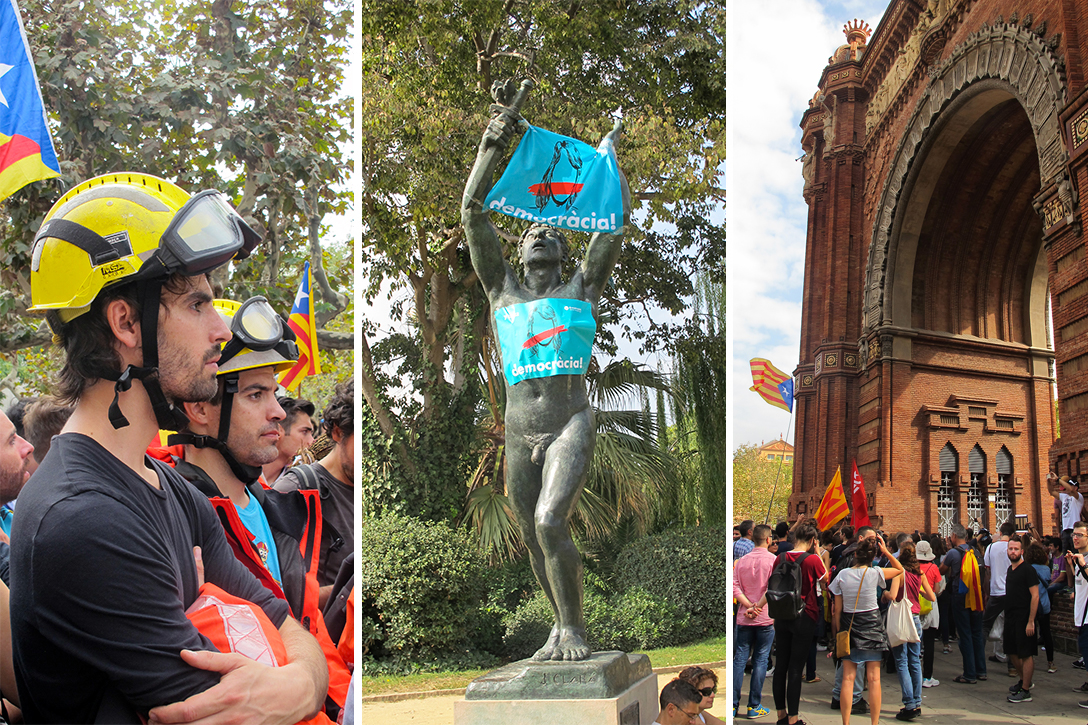 Because of this, there is an expansive and vocal movement to secede and become an independent nation. On October 1, Catalonia attempted to vote on a referendum declaring said independence. You may know by now that it did not go well. Madrid sent in literal boatloads of police who forcefully entered polling places, confiscated voting material and assaulted a lot of people with batons. Images of bleeding grandmothers have shocked the world, as have Madrid’s decidedly repressive actions. Some 700-900 people were injured by police. 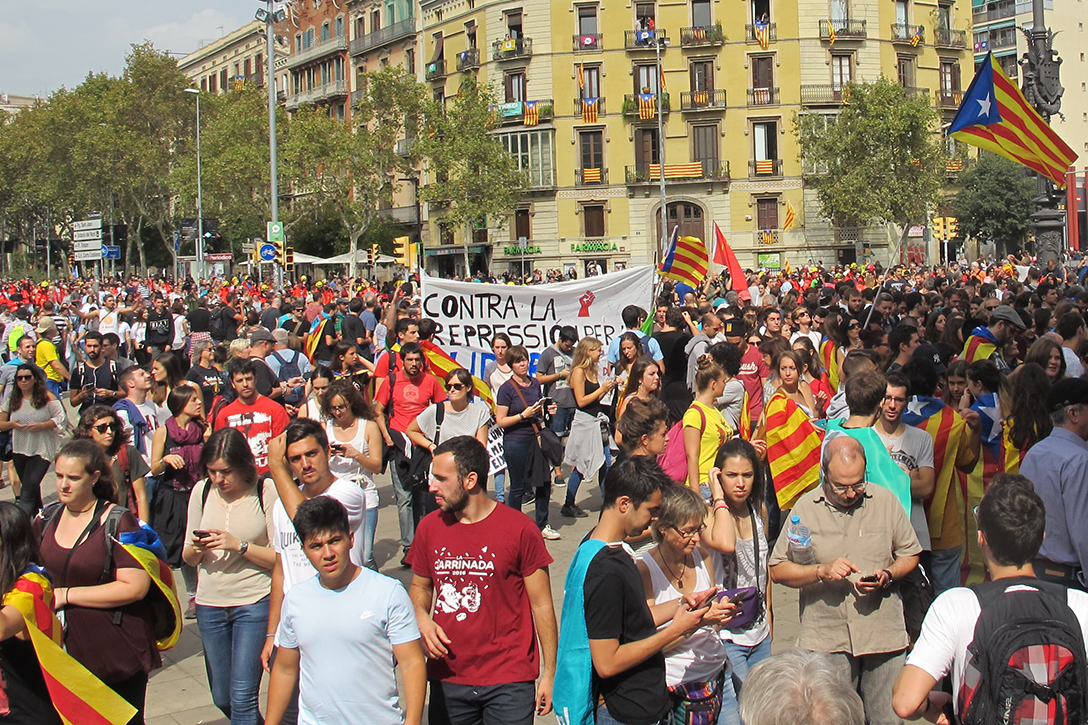 The government’s position regarding the independence movement is understandable from an economic perspective. Losing the province would mean the loss of some 20% of Spain’s tax-base. What’s more, if the Catalans are successful it will bolster independence movements in the states of Andalusia and the Basque Country. If those were to go through, Spain as we know it would cease to exist.

But the Catalans have a persuasive argument, and for Americans — whose identity holds independence at its core — it’s difficult not to sympathize. 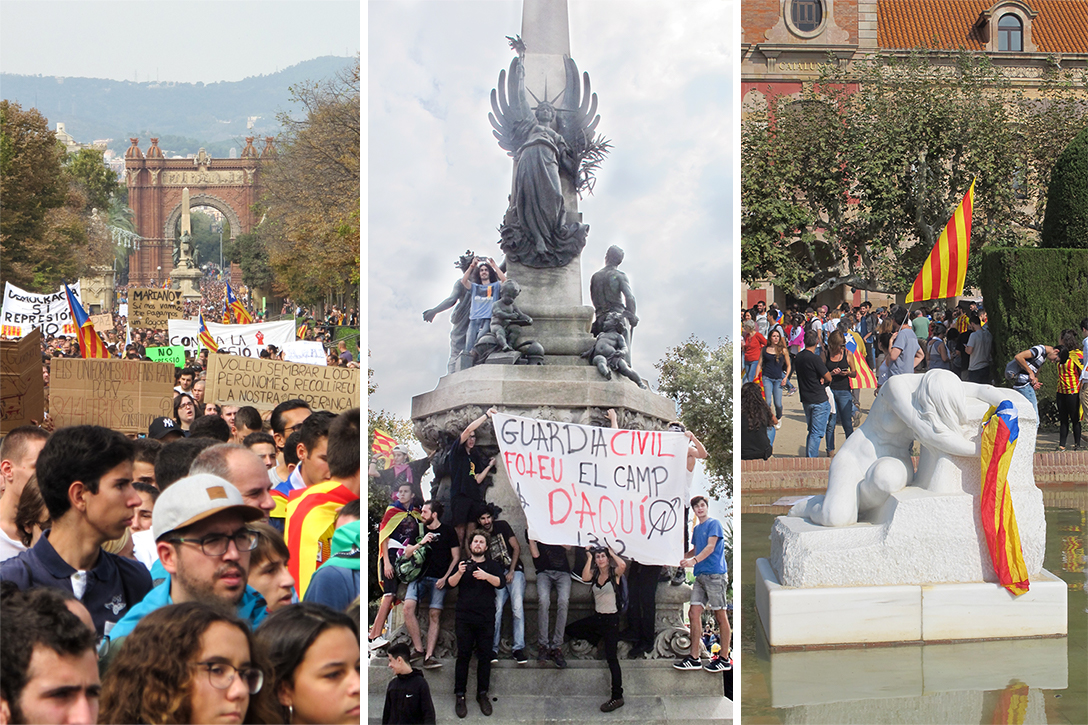 Following the violent repression of the vote, the Catalan state called for a more or less general strike. When I flew into Barcelona the night before the strike, the potential of a violent confrontation loomed. It was widely assumed that Barcelona specifically would become a battleground.

That did not happen. In fact, the entire city enjoyed something of a lovefest all day — especially toward the firefighters. This requires further explanation. 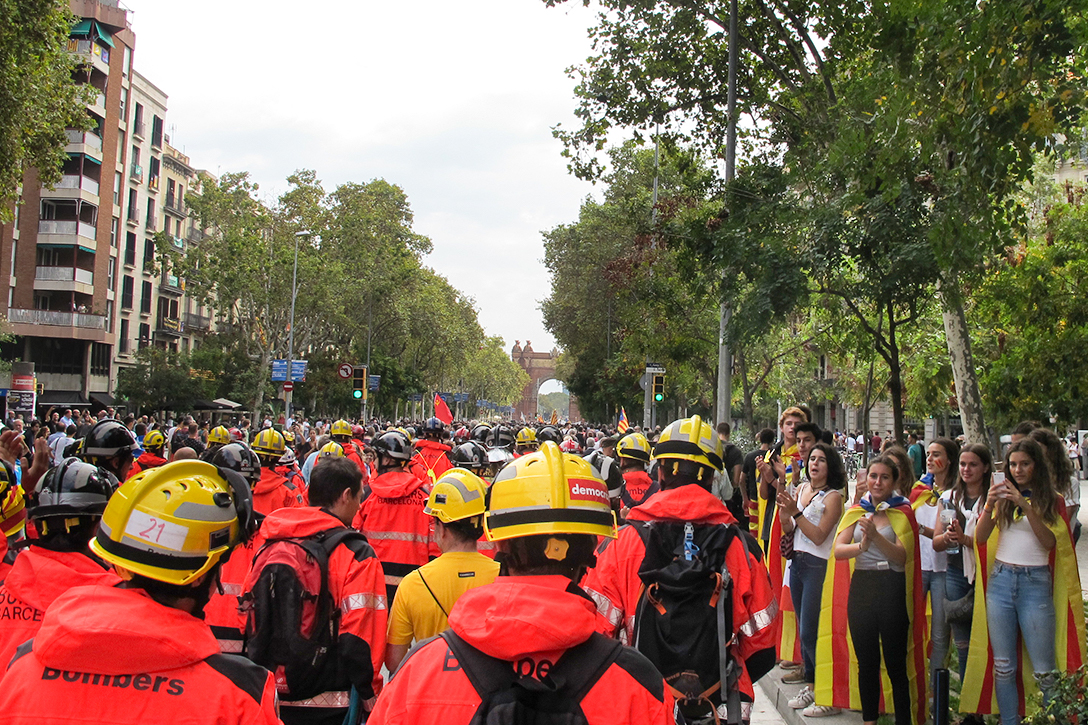 During the attempted vote, images of firefighters interposing themselves between violent police and peaceful protesters went viral. Later, as hundreds of thousands of people marched on the parliament building, firefighters were at the center of the crowd. And when the march reached its destination, firefighters once again formed the front lines between protesters and police. 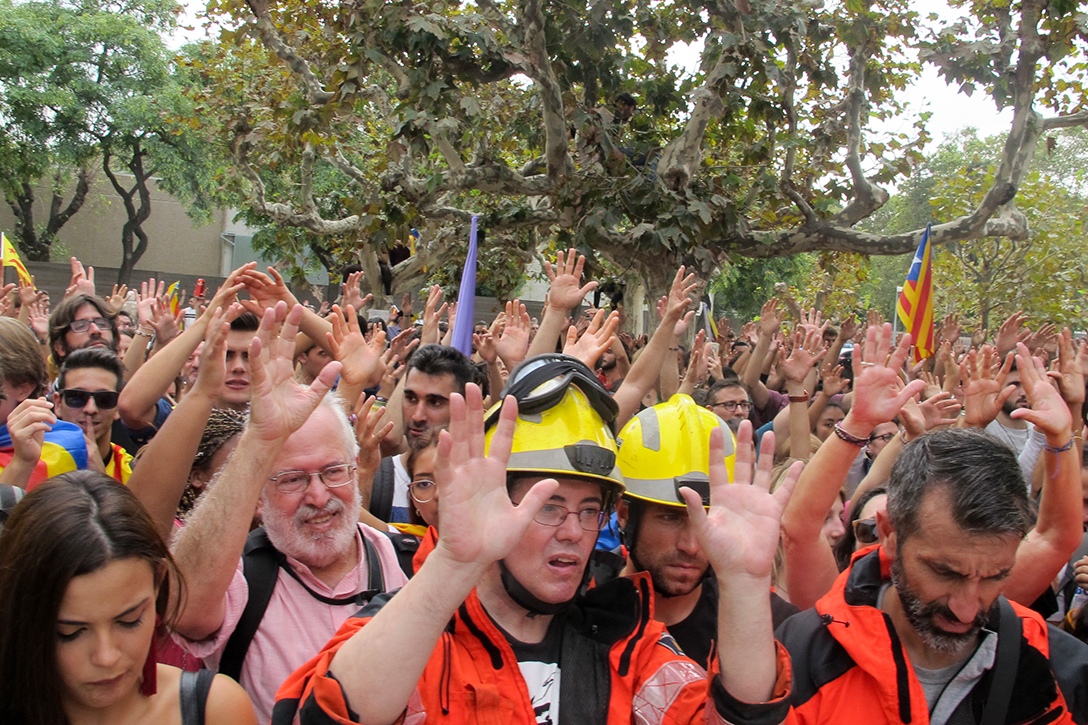 This time there was no violence. Quite the opposite. The flag-waving crowds were all patriotic songs and mirth. There was a particularly joyous moment when some hundred or so young people rushed a handful of firefighters to give them hugs. 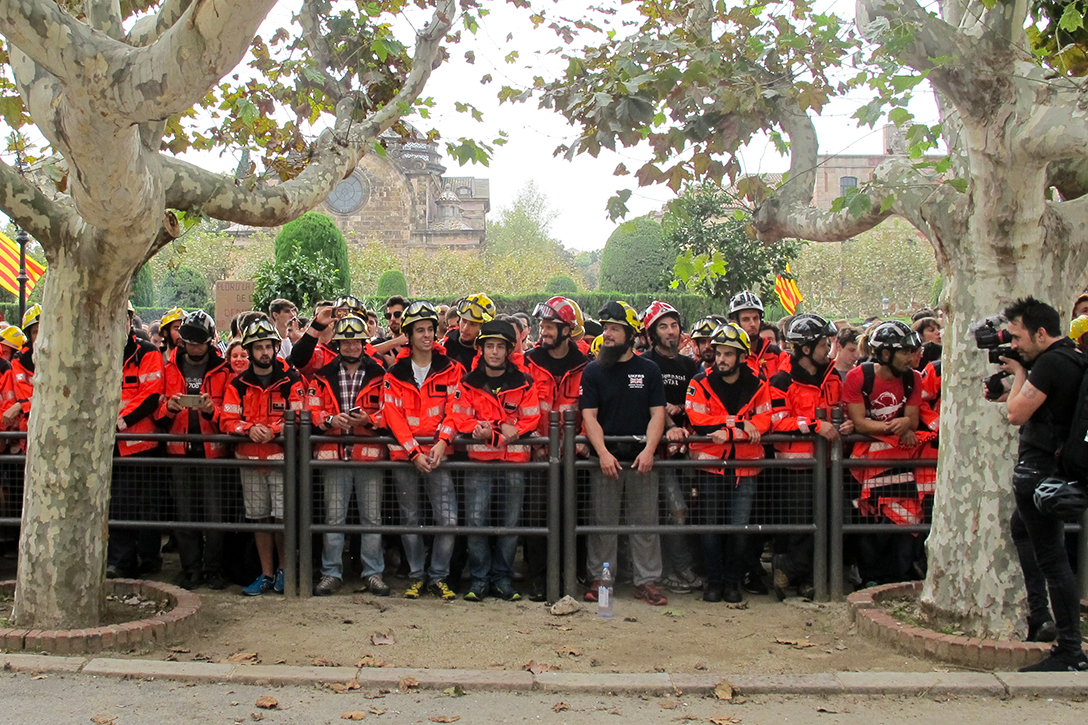 I don’t know if the Catalans should have independence, and it’s not really a question for me to answer. But one thing is certain — these protests and this movement represent valid concerns that must be addressed by the government in Madrid, and not with riot police and repression.

Until Madrid recognizes that, Catalonia will continue to rally around its firefighters, and continue its struggle for independence. 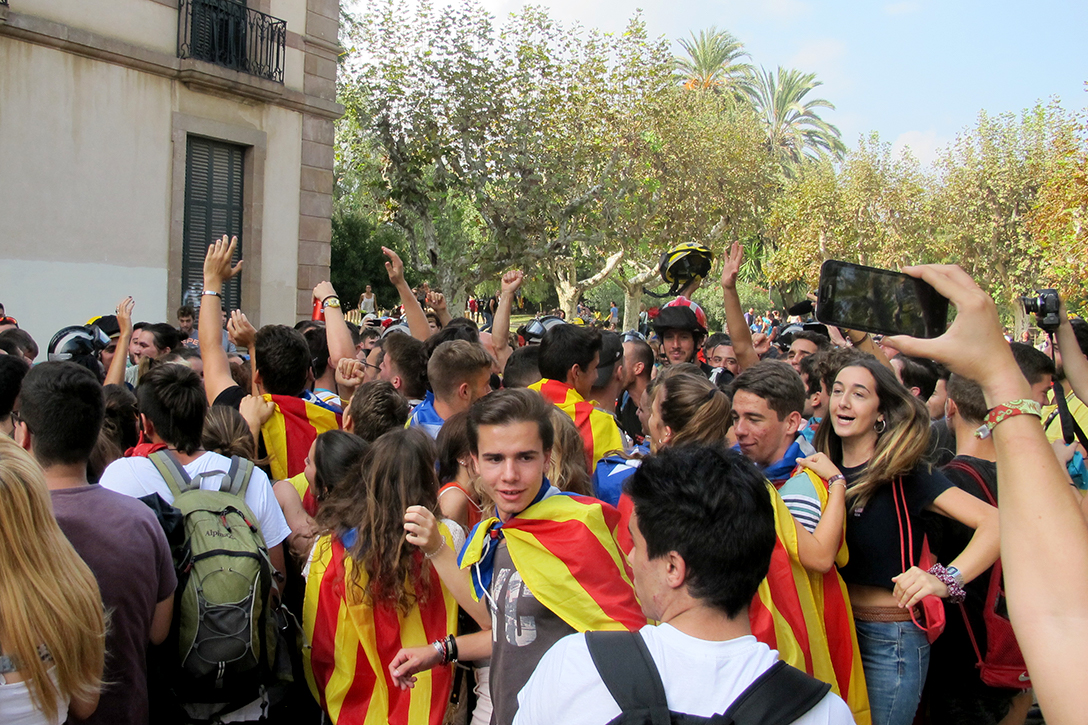 All photos courtesy of Nick Hilden

2 responses to “An Independent Catalonia: Where Firefighters Are the Unexpected Heroes”