As Congress continues to struggle to either repeal or fix Obamacare, states are fighting their own battles over health care. One of them is taking place in Maine — and it could have huge implications for the rest of the country.

Earlier this year, more than enough voters’ signatures were delivered to the office of Maine’s Secretary of State to place a citizens’ initiative on the November ballot.

The Maine ballot initiative is the first in the nation to take the issue of Medicaid expansion under the Affordable Care Act (ACA, popularly known as Obamacare) directly to the voters. If passed, it will expand Medicaid coverage to adults between 18 and 64 living at or below 138% of the federal poverty line.

The impetus for the initiative came after the state legislature’s failure to override GOP Governor Paul LePage’s repeated vetoes of bills that would have brought Maine into the expanded Medicaid program.

In upholding the constitutionality of Obamacare in 2014, the Supreme Court granted individual states the choice of whether or not to participate in the expanded funding program. So far 31 states and the District of Columbia have elected to participate in ACA and accept expanded Medicaid funding. Nineteen have not. Those states have Republicans in control of the state legislature and/or the governor’s office.

The cliffhanger Senate vote in July on the GOP proposal to scale back Obamacare drew nonstop media attention. The same is true for the upcoming vote on the latest attempt to derail the program. Yet some equally important state legislature votes against participation in Medicaid expansion went under the radar. ACA supporters in some of those 19 states have made efforts to reverse the anti-ACA votes through their legislatures, without much success so far.

In Kansas, a majority of moderate Democratic and Republican state legislators voted in 2017 to have the state participate in ACA, but they did not have the votes to override Republican Governor Sam Brownback’s veto.

In Virginia, the Republican legislature was so firm in its opposition to even take up expanded Medicaid funding that Democratic Governor Terry McAuliffe seriously considered end-running their opposition through an executive order. He later backed off and the issue is now dead, pending the outcome of this year’s election. In Maine, one of two states carried by Hillary Clinton that is not participating in expanded Medicaid, the legislature voted for expansion five times but each time fell short of overriding the veto of a Republican governor.

What Is at Stake

Both sides in the state-by-state struggle to expand Medicaid paint a dire picture of what would happen if the other side were to prevail. A 2017 study sponsored by the Urban Institute projected that if all 19 remaining states were to expand Medicaid, the number of uninsured would fall an additional 4.1 to 5 million people, depending upon enrollment success. A 2015 study by Manatt Health found that the costs of emergency hospital visits in states that expanded Medicaid dropped twice as much compared to states that chose not to expand Medicaid. The study attributed that difference entirely to the expansion.

Opponents also point to statistics. They cite large cost overruns in the Medicaid budgets of the states that have accepted expansion. They contend this is largely due to enrollments averaging 91% higher than projected. These record-setting projections, combined with the fact that there is no guarantee that the federal government will continue to fund 90% of the costs of expanded Medicaid, could lead to much higher costs to state taxpayers down the road. All in all, this point is made to serve as a warning to those states considering Medicaid expansion.

“[With] the five gubernatorial vetoes overriding bipartisan majorities in the House and Senate, it became clear that if we wanted to help people get access to health care, and we wanted to strengthen our economy, we had to do it ourselves,” David Farmer — the communications director for Mainers for Health Care, the chief group supporting the initiative — told WhoWhatWhy.

So far the battle in Maine has shaped up along strict ideological lines: Supporters of Medicaid expansion argue that government programs can make a positive difference in the lives of ordinary people, while opponents view this program as a drag on the economy as a whole and the private sector in particular. Some critics label it a boondoggle that will fail to deliver on its promises.

Farmer believes that expanded Medicaid would benefit the state in several ways. Among the gains he cites: $500 million into the state’s economy each year via federal funding, the creation of 3,000 jobs in the health sector, and the strengthening of rural hospitals and community clinics — in addition to expanding access to health care for 70,000 Mainers.

“[The expansion] will also hold down and help reduce premiums in the private insurance market,” Farmer said. “Right now, those folks that don’t have coverage often rely on the emergency room for care, which drives up costs for everyone.”

One of the groups opposing the initiative is the Maine Heritage Policy Center. The Center believes the state’s recent experience with Medicaid expansion under then-Governor Angus King gives them a potential ace up their sleeve.

“In 2002, under then-Governor Angus King, we expanded Medicaid up to 125% of the federal poverty level and during that time we were promised that it would save lives, boost Maine’s economy, reduce the rate of uninsured, you name it,” Jacob Posik, a policy analyst for the Center, told WhoWhatWhy. “These are many of the same arguments being used today. We crunched numbers from back then and we determined that nothing they had promised came true.” 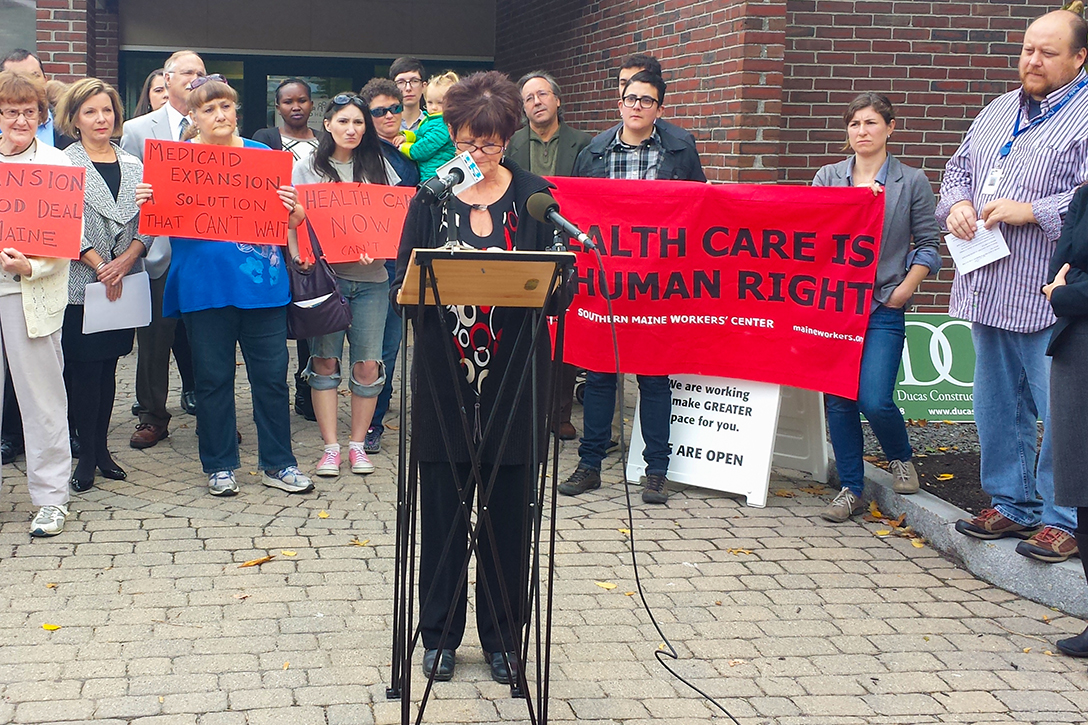 By January, supporters of Medicaid expansion had acquired enough signatures to move the issue to the November 2017 ballot.
Photo credit: mainersforhealthcare.org

The Maine Heritage Policy Center released a major white paper in July that took to task King’s Medicaid expansion predictions. Using detailed statistics, the Center argued that the economy did not receive a huge boost from expansion, that uncompensated care costs — for emergency hospital visits — almost quadrupled, and that the uninsured rate remained the same. The Center also cited statistics to show that King’s expansion undercut private health plans, as able-bodied workers abandoned them to enroll in the Medicaid program at the taxpayers’ expense.

Unsurprisingly, initiative supporters disagree. Farmer sees the program as a potential boon for the private sector, claiming other states that expanded Medicaid saw overall health costs go down — creating a “ripple effect” on the private market. He also disputes the Heritage Policy Center’s claim that the uninsured rate was unaffected. “Expansion provided a crucial safety net when people lost their jobs during the Great Recession of 2008,” Farmer said.

Another emerging fault line between the two sides concerns the differences between traditional Medicaid recipients and recipients of expanded Medicaid. Expansion opponents label traditional Medicaid recipients as the “deserving poor” while claiming that those enrolled under the ACA expansion program are the “able-bodied” who choose to be an additional burden on taxpayers. Supporters view the expansion as an insurance program that benefits broad segments of the public, such as newborns and nursing home residents.

Political observers in Maine generally rate the initiative as a favorite to win in the fall. Tom Saviello, a state representative who unsuccessfully pushed expansion in the legislature, noted that “Polls show that 60 percent of Mainers want to expand Medicaid.” Medicaid’s popularity with rank-and-file voters is also a big plus for the initiative. Earlier this year a poll by the Kaiser Family Foundation found that 84% of Americans say it’s important to keep federal funding for an expansion of the Medicaid program under ACA. Obamacare’s popularity is on the rise, topping 50% in the polls this year.

Another problem for initiative opponents is an apparent lack of organization. While initiative backers have a central organization, Mainers for Health Care, coordinating the “yes” campaign, as of this date the opposition does not. The “no” side is being run on a more ad hoc basis, with the Maine Heritage Policy Center, Maine’s Republican Party, and Maine Governor LePage’s office all campaigning independently against the measure. The “yes” side has raised almost $200,000, mainly from left-leaning organizations like The Fairness Project, Maine Equal Justice Partners, and Mainers for Health Care.

Yet there are some clouds on the horizon for the ballot measure. One, cited by professor Amy Fried, chairman of the political science department at the University of Maine, is the prospect of low turnout in an off-year election. Another potential problem, Fried told WhoWhatWhy, is that several ballot issues approved in November 2016 were at least partially blocked by the governor and legislature. While a raise in the minimum wage passed, a provision implementing the raise for waiters and waitresses who worked in part for tips, was blocked.

“And there was another referendum that passed that would have raised taxes on people making $200,000 a year and the money would go to education. The tax was never implemented… People might say we passed these various things in 2016 but the governor and legislature never carried them out. So why vote now?” Fried said.

As Maine Goes, So Goes the Nation?

While there are wide differences of opinion about expanding Medicaid, if the Maine initiative does pass this fall, its political impact nationally would be significant. Most agree that it would encourage expansion activists in other non-expansion states to take their case to both state legislatures and the voters through the initiative process. In fact, there are already petitions circulating in Alaska to make Medicaid expansion more permanent through a 2018 ballot initiative. Although the state did expand Medicaid through an executive order, that order could easily be overturned by a new governor.

Besides Maine, the following states have not expanded Medicaid under the ACA, but do allow their citizens to place initiatives on the ballot either directly or indirectly: Idaho, Missouri, Nebraska, Oklahoma, South Dakota, Utah, and Wyoming.

In Florida and Mississippi, citizens can place initiatives to amend the state constitutions on the ballot. Constitutional initiatives generally require more signatures than other ballot measures.

If the Maine initiative passes this fall, that will raise the total number of states with expanded Medicaid to 32, while giving heart to activists in the remaining nine non-expansion states that give their citizens a voice in directly shaping legislation. And it may have even more far-reaching consequences.

“I … think a successful campaign here [in Maine], will strengthen the resolve of those members of Congress, who have opposed efforts to undermine and destroy Medicaid at the federal level… As you know, Maine has some critical players in that debate with independent Senator Angus King and moderate Republican Susan Collins,” Farmer told WhoWhatWhy.

How Maine votes this November could determine whether Medicaid expansion moves forward in other states. But the initiative could also be a key factor in deciding whether Obamacare remains intact nationally.