It all started with a single gunshot from a Blackwater Security Company guard. A young man who was driving with his mother to pick up his dad from work was killed. His foot wedged against the accelerator causing his car to roll towards a Blackwater vehicle. Then, as one eyewitness recalled, “the shooting started like rain.” The young man’s car burst into flames after a direct hit by a grenade.

This was the scene when a Blackwater private security convoy opened fire in a busy square in Baghdad in the middle of the day, exactly 10 years ago, for no reason other than nervous trigger fingers.

Seventeen innocent Iraqis were killed and 24 injured in what came to be known as the Nisour Square Massacre. It contributed to the negative Iraqi public opinion toward the allied forces’ presence in their country, and to increased backlash and bloodshed.

Now the founder and ex-CEO of Blackwater (renamed twice — currently Academi Services) has the ear of the president of the United States.

Erik Prince is the brother of billionaire secretary of state for education Betsy DeVos. He and his family donated more than $10 million to GOP candidates and super PACs in 2016.

Prince was invited to an August meeting of military specialists at Camp David to finalize President Donald Trump’s strategy on Afghanistan. He had been making the rounds in Washington with a binder containing his proposal to embed advisors in Afghani forces and provide them with a private air force. All of this would be overseen by a commander, known as a “Viceroy,” reporting to Prince’s company.

“The privatization of security is not unusual,” says Robert Young Pelton — author, adventurer and war journalist whose coverage includes Chechnya, Afghanistan and Iraq. “But the privatization and provision of military level violence in conflict zones has proven to be a root cause of anger and distrust…The worst-case scenario is the self-financing of private armies so there is always skepticism of private plans to fight wars.”

There is nothing wrong with Prince’s strategic plan, says Pelton. “[It] was written by people with experience in the fundamentals of counterinsurgency concepts: air support, training of small commando groups and logistics.” 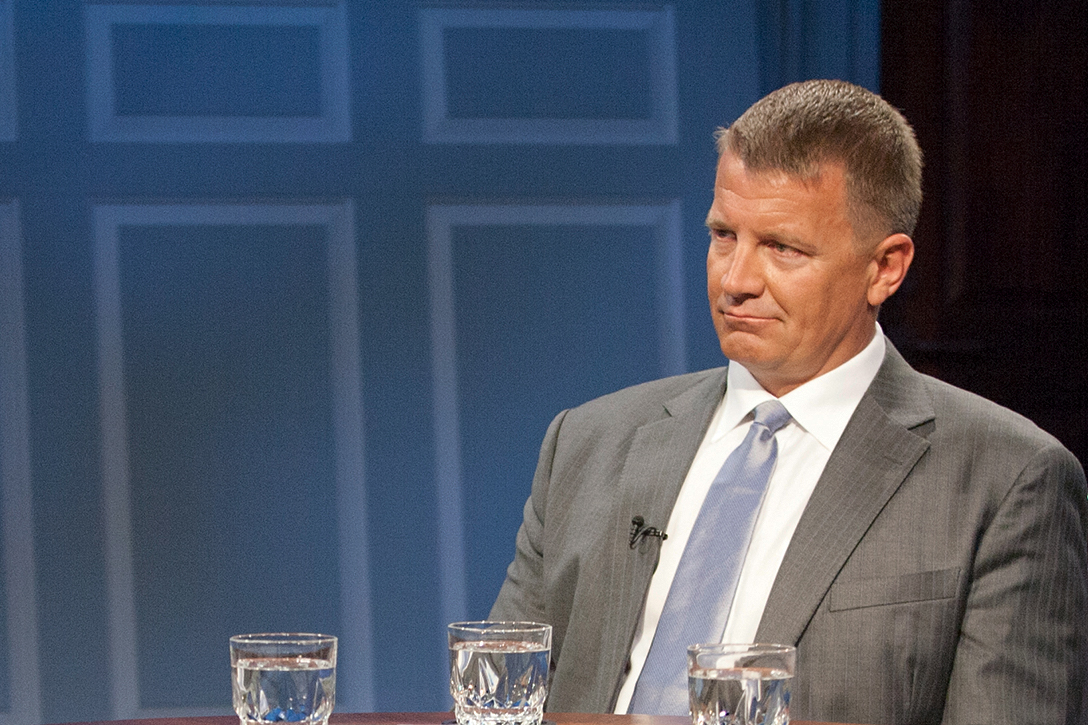 The problems began, says Pelton, “when Prince adds a level of bad history reading by integrating inflammatory concepts such as ‘Viceroy,’ ‘East India Company’ and of course the unsaid assumption that he seeks to profit from war.”

Despite a seeming inability to grasp how terms from the colonial past might upset present-day Afghans, Prince had clearly done his homework on President Trump’s fondness for flattery. He likened his master-plan for Afghanistan to Trump’s “turnaround” of a stalled ice rink in New York. Prince was so keen for this sycophantic reference to be highlighted in an interview he gave to the Atlantic that he told the writer: “Make sure to get the Wollman Ice Rink…Please be sure to use that in the article.”

Meanwhile, on August 4, the US Court of Appeals for the District of Columbia overturned the only murder conviction of a Blackwater employee involved in the massacre; the Court also ordered the resentencing of three other Blackwater employees currently serving 30 years each on lesser manslaughter and firearms charges — ruling that these sentences constituted “cruel and unusual punishment.”

Pelton does not fault the Appeals Court on this decision: “The State Department created the high-profile violent operating style of Blackwater, and events like Nisour Square were just the most egregious of many. But the trial was deliberately vindictive, [it] wrongly applied laws and was fraught with procedural problems.”

“Full focus should be on the US Government’s use of rented perpetrators of violence in order to conduct business in hostile regions,” Pelton says. “It was only a matter of time before an event of this type would occur in Iraq using these operating methods condoned by the State Department.”

Prince’s lack of regret or acceptance of blame for murderous mistakes by his employees is a matter of public record. In a congressional hearing less than a month after the Nisour Square massacre, he testified that his men had “acted appropriately at all times.” When pressed further by Illinois Democrat Danny Davis, Prince denied the company had ever killed innocent civilians.

Davis: “You do admit that Blackwater personnel have shot and killed innocent civilians, don’t you?”

Prince: “No, sir. I disagree with that, I think there’s been times when guys are using defensive force to protect themselves, to protect the packages, trying to get away from danger. There would be ricochets, there are traffic accidents, yes. This is war.”

Jeremy Scahill, in his book Blackwater: The Rise of the World’s Most Powerful Mercenary Army, is dismissive of Prince’s unwaveringly defiant testimony.

“The assertion by Prince that no innocents had been killed by Blackwater was simply unbelievable. And not just according to the eyewitnesses and survivors of the Nisour Square shootings and other deadly Blackwater actions. According to a report prepared by [former Congressman Henry] Waxman’s staff, from 2005 to the time of the hearing, Blackwater operatives in Iraq opened fire on at least 195 occasions. In more than 80 percent of these instances, Blackwater fired first. These statistics were based on Blackwater’s own reporting. But some alleged the company was underreporting its statistics. A former Blackwater operative who spent nearly three years in Iraq told the Washington Post his 20-man team averaged four or five shootings a week, several times the rate of 1.4 incidents per week that Blackwater claimed.”

Trump’s announcement of his new strategy for Afghanistan was typically short on specifics. Whether Prince’s private army will form part of or inform all of it is not yet known. But given the bloody history of what is now the longest war in US history, the question arises: Can the US afford to send for-profit mercenaries with views aligned to Prince’s onto the streets of Afghanistan at the taxpayers’ expense?

19 responses to “A Decade After Massacre, Blackwater Founder Buddies Up With President”