Are consumer boycotts just attention-grabbing political theater? Or can ordinary people voting with their wallets have a lasting impact on society at large?

On the evening of January 28, 2017 freelance writer Dan O’Sullivan took to Twitter to protest the actions of ride-sharing service Uber. Under the hashtag #deleteUber, he accused Uber of trying to “profit off of refugees” after local taxi drivers had halted service to and from New York’s John F. Kennedy airport in solidarity with people affected by President Trump’s so-called Muslim ban on air travel throughout the US.

What prompted O’Sullivan’s tweet was Uber’s decision to suspend “surge pricing” near JFK, which was seen as a signal to its drivers to pick up airport fares temporarily stranded by the absence of taxis.

Within hours, O’Sullivan’s tweet went viral. Uber users, angry at what they saw as the corporation’s attempt to undercut the taxi drivers’ anti-Trump work stoppage, hashtagged and retweeted. Estimates suggest Uber may have lost 200,000 users. 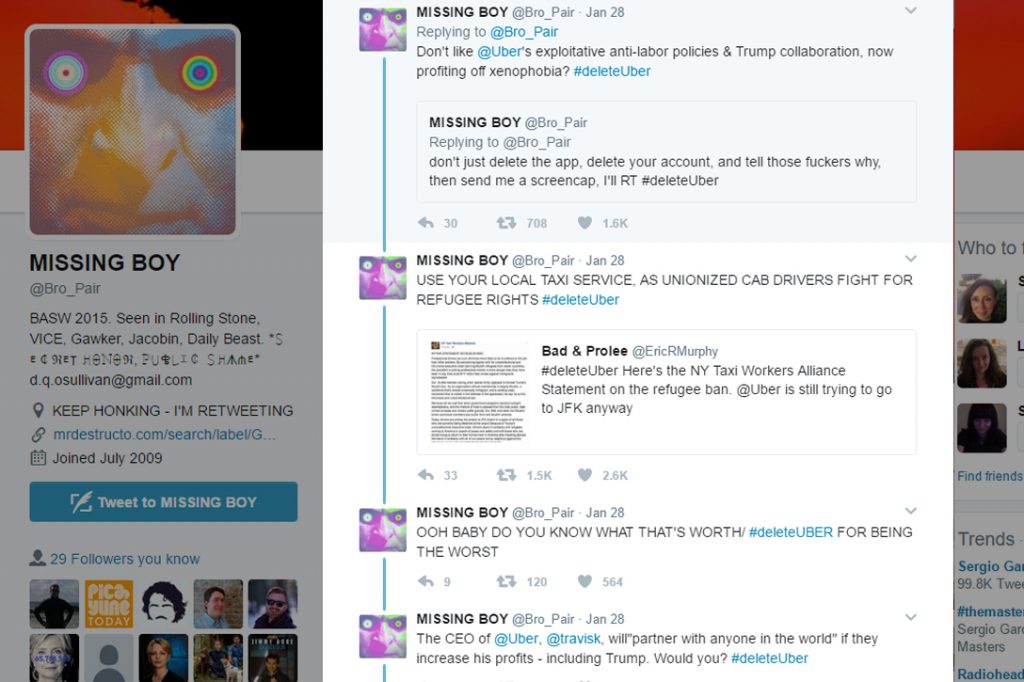 Whether designed as such or not, #deleteUber became a nationwide boycott. The outpouring of support for #deleteUber followed months of demands from Uber drivers for workplace protections such as overtime pay and minimum-wage guarantees.

Those specific demands from Uber drivers have yet to be met. But six days later Uber CEO Travis Kalanick stepped down from his position as an economic adviser on President Donald Trump’s Strategic and Policy Forum. So the Uber boycott apparently forced a major corporation to minimize its public ties to an unpopular president.

Boycotts of one kind or another have a long history. The word itself goes back to 1880, when workers and tradespeople in County Mayo, Ireland, united to shun and shame a land agent named Capt. Charles Boycott, who was evicting tenants from their homes.

The use of economic and social pressure to achieve political ends has proliferated in the era of hashtag activism. Frustrated by blocked political channels, individuals and organizations are exploring how to effect change through the market.

Grabyourwallet.org lists businesses with ties to Trump for the convenience of people who want to punish those companies by withholding their business. The Democratic Coalition Against Trump developed the ‘Boycott Trump’ app for iPhone and Android. The Coalition of Immokalee Workers (CIW) spent the last two weeks of March touring southern and midwestern states calling for a widespread boycott of Wendy’s fast food restaurants. As of yet, the restaurant chain has refused to negotiate any participation in the CIW’s Fair Food Program, which fights for the human rights of workers in Florida’s tomato fields.The limits of this approach are also clear in the Uber boycott. Uber remains by far the most widely-used ridesharing app on the market. And Uber’s workers continue to press for better wages and working conditions.

Nevertheless, some scholars contend that boycotts have value.

“Boycotts can be an effective tactic within a larger strategy for building a broad-based movement for change,” Dr. Lane Windham, fellow at the Georgetown University Kalmanovitz Initiative for Labor and the Working Poor, told WhoWhatWhy. “Too often activists do not recognize the difference between a strategy and a tactic. The delete Uber campaign effectively has put pressure on the CEO…[but] this protest could also support Uber drivers who are fighting for fair pay and more power on the job.”

Some boycotts have achieved their goals.

Both the Montgomery Bus Boycott in Alabama of 1955-56 and the 1965-70 United Farm Workers grape boycott led by Cesar Chavez garnered support from concerned citizens. They also had close ties to activist movements with political influence and, for the UFW, a link to organized labor. In 1985, the black residents of the Port Elizabeth, South Africa, called for a boycott of white-owned businesses with the support of the anti-Apartheid movement. The action delivered a substantial blow to the business community. Shop owners looked to the government to resolve the issue, and organizers were able to negotiate the release of the movement’s leaders from prison.

But without a clear-cut strategy and specific goals, boycotts face significant obstacles. Boycotts can reach people otherwise uninterested or disengaged with politics. The challenge — as #deleteUber demonstrated — is using the boycott to effect substantive change rather than relatively minor concessions.

Substantive change is what the CIW — the organization that issued the call to boycott Wendy’s — aims to produce through organized consumer influence. The organization has no larger political goals.

“The ability to influence local or national legislation is not something poor people’s organizations are particularly well suited to do,” Greg Asbed, co-founder of the CIW told WhoWhatWhy. “Virtually any legislation that would be of value to low-wage workers would be opposed by some of the most powerful and well-funded lobbies in this country. That is a playing field that is so far from level for low-wage workers that it is effectively vertical.”

With roots in farmworker organizing, the CIW is an organization of both workers and consumers that leverages consumer pressure on corporations to force compliance with a specific set of fair labor standards established by workers themselves through its Fair Food Program.The CIW has a novel approach to consumer organizing.

The basic structure is simple: consumers, engaged through an expansive network of local coalitions and alliances, exert substantial pressure on a corporation for its leaders to agree to sign on as a participating buyer in the Fair Food Program, requiring a commitment to purchase Florida tomatoes only from farmers registered as participating growers. An external body, the Fair Food Standards Council, conducts regular audits of these farms and maintains a worker-complaint hotline. The farm workers educate one another and participate in corporate negotiations.

“Boycotts are not easy, and in our experience usually not necessary…However, the model of workers and consumers coming together to fight for supply chain reforms is a model with tremendous potential for bringing about significant and long-overdue change for low-wage workers in the food industry and beyond,” Asbed said. The CIW’s strategy relies on its ability to harness the power of consumers. Without the pressure not only of reduced sales, but the threat of a tainted image, the corporations would be unlikely to participate in the Fair Food Program.

Twice though, the CIW has turned to boycotts. They first targeted Taco Bell in 2001. The second is the current Wendy’s boycott. Unable to convince the fast food chain and its parent company Publix to come on board otherwise, the CIW issued the call to boycott Wendy’s in 2015 — with very modest success.

Most of the support has come from student groups — ranging in size from seven to nineteen students — pressuring universities to cut contracts with Wendy’s restaurants. Organizations from Ohio State University, Vanderbilt, the University of Florida, New College, Georgetown and Notre Dame have initiated hunger strikes in an attempt to publicize the boycott and persuade university leadership. Beyond the campus, the boycott has yet to a gather a significant following, and the schools have yet to come on board. 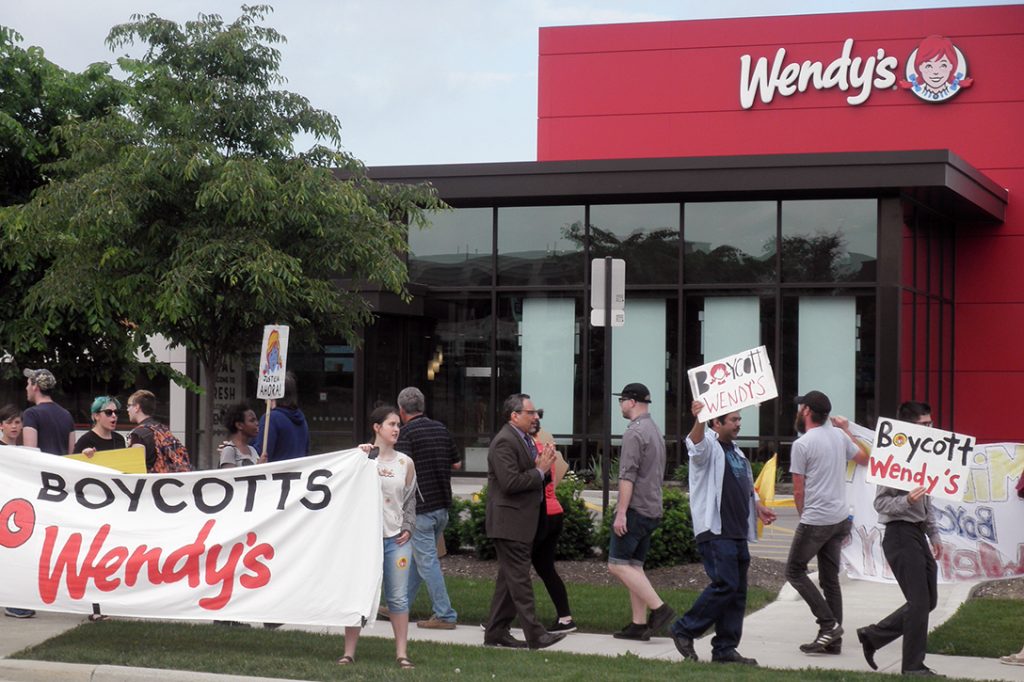 Whether the boycott will serve up a commitment from Wendy’s remains to be seen. The CIW’s record suggests at least the potential for success. As the political landscape veers to the right and traditional avenues for change disintegrate, boycotts as a key tactic in a market-driven strategy might prove not just useful, but essential.

The current political and economic climate, “begs the labor movement to engage in community-type activities,” said Dr. John Russo, former Co-Director of the Center for Working-Class Studies at Youngstown State University and Visiting Scholar at the Georgetown Kalmanovitz Initiative.

“Work-related types of struggles,” he added, “are going to be around basic income, new types of social policies that are outside the old New Deal system. This is also a period of experimentation. How we experiment with different kinds of boycotts is all up for grabs.”