What we had hoped for on Inauguration Day was a traditional “Kumbaya” moment, even if just for a day, after one of the nastiest presidential campaigns on record.

Of course, new presidents are expected to sound resolute and even belligerent here and there in their opening speech. We would expect to see our new president draw the long face and utter solemn words against our foreign enemies, Russia perhaps, or North Korea. But the plurality of citizens who did not vote for him could be forgiven for expecting the balm of reconciliation. Instead, the long face, the jutting jaw, the angry rhetoric, were turned toward the country itself. Not only against Hillary Clinton’s voters, but against politicians in general, all past presidents included, indeed everyone who had just exchanged air kisses of their own with Trump.

He trashed the country as a whole in his speech and at one of the balls that followed the parade, he haughtily dismissed all those who had gathered to welcome him. “They are all very elegant people tonight,” he confided to his base, “but they are also very political people.” This putdown, presumably, was meant for only his closest advisors and donors, who of course are not at all political.

Gracious to the end, President Barack Obama treated Trump with deference through the transition and the inaugural. But it was almost too painful to watch as Michelle Obama had to bring herself to kiss on both cheeks the man who jumpstarted fake news with his campaign of lies against her husband in 2011 and kept defaming Obama to the bitter end.

Just last year he had proclaimed at a press conference in Florida, “I think President Obama has been the most ignorant president in our history…He has been a disaster as a president. He will go down as one of the worst presidents in the history of our country.”

Everyone was on tip-toe waiting for some words of unification. In retrospect, that was probably a foolish hope. Trump was always going to be Trump. He said the era of talk, talk, talk was over, an obvious dig at John Lewis, but in fact his speech blew more hot air than several inaugural speeches combined. It over-promised even more than his rally rants, if only because his inaugural combined every trope he has ever used. As always, he summoned us to patriotism while trashing our country, and by inference every leader who has ever come before.

Speaking of the degradation of our inner cities and the rampant drug use in white rural areas, he announced: “This American carnage stops right here and right now.” Really? He declared our public education system so lacking that it “leaves our young and beautiful students deprived of all knowledge.” (In the text that was distributed, someone wisely took out the word “all.”)

The entire spectacle once again left many to wonder how we got to this point.

It is interesting to speculate whether Trump’s constant mantra that it was a “rigged election” was to divert our attention away from the fact that somebody supporting him had rigged it.

Remember Rudy Giuliani laughing like the Joker during an interview just a day or so before James Comey’s press conference, while promising something big coming. He was almost literally licking his chops on television. Evidently his friends in the FBI had been keeping Giuliani in the loop on the trap that was about to be sprung. (And it’s interesting that Paul Manafort had the connection to Russia and his erstwhile partner Roger Stone had the connection to Julian Assange, or so I heard him say in an interview.)

One detail that has gotten lost in all of the reporting is the timing of the Wikileaks release of Podesta’s emails. They started dropping right after the video in which Trump brags about grabbing women by their pussies, and continued to drop until near the end. It would seem in retrospect that they had been held in reserve, like a giant net of victory balloons on election night, waiting for a signal to be given.

Talk about diversion. That stream of emails gave the media, and certainly Rupert Murdoch’s platforms, a constant flow of negative stories about Hillary Clinton to feed off for the remainder of the campaign, and gave rise to the mantra for Trump rallies from then on, “Lock her up.”

It is pretty clear now that Comey’s “new” investigation changed the minds of a sizable part of the electorate during that final week of the election. And Comey’s intervention was just icing on the cake after months of a Chinese water torture of leaked emails, courtesy of Vladimir Putin, Assange et al.

The exact details of how this election was stolen — what part of it was hacked emails and who hacked them, how much effect Comey’s October surprise had, not to mention his totally improper characterization of Clinton in July, and his motivation for both extraordinary acts — will be a matter for enterprising journalists and historians and congressional inquiry. The real point right now is to understand and process the fact that this election was stolen by third parties on behalf of Trump. Period. 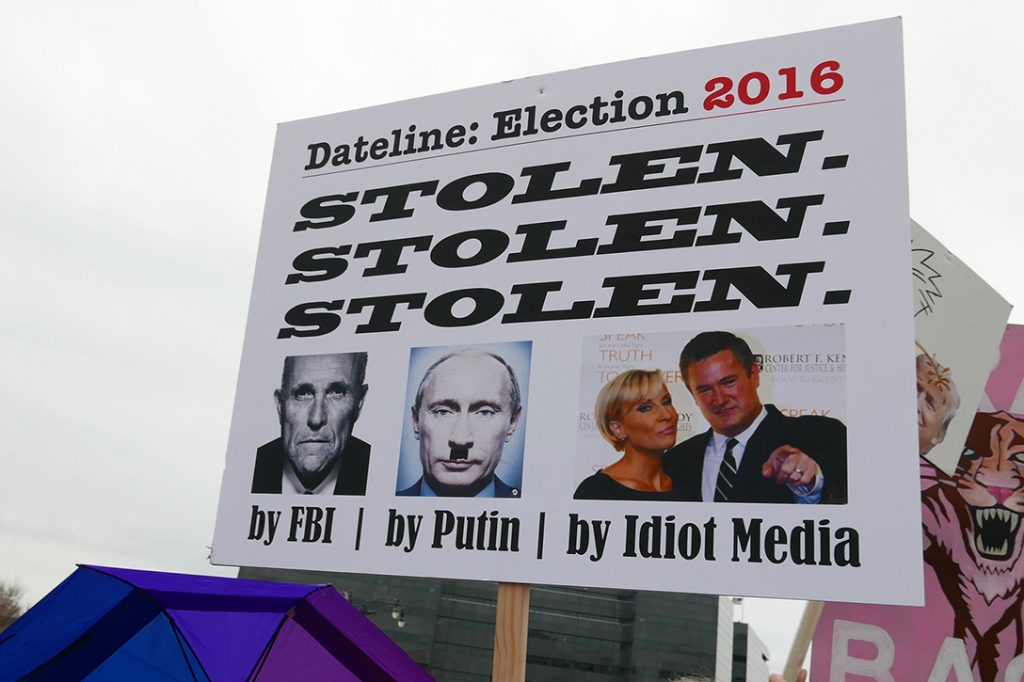 If you want to believe it was not the Russians, more power to you. But there is no way those daily drips about the DNC conspiring against Bernie Sanders, about leaked questions from CNN, about campaign concerns about the Clinton Foundation, were not cumulatively devastating. How can you think otherwise? Each leak ratcheted up the volume of “Lock her up” until it became deafening. Some were shouting, “Hang her in the streets.”

Now just try to imagine if emails from the Trump campaign, which were also hacked, had been leaked, one day at a time. It does not take much imagination to conjure up what might have been revealed in those emails. They would make Podesta’s emails look as mild as a mug of hot cocoa.

Whoever made that choice — dump Clinton’s emails or dump Trump’s — decided the election.

In order to realize how big a story this is you have to rise above the cynicism of thinking that all politicians in both parties are crooked, and that a victory by one side or other doesn’t make that much difference.

Believe it or not, this “coup” will affect the trajectory of history just as much as the assassination of JFK. Perhaps more. As different as they were, JFK and Lyndon B. Johnson were of the same party. Indeed ran on the same ticket. And LBJ kept on a great many of JFK’s brain trust to carry on JFK’s legacy. With Trump you have a volte-face in every department of the government. One day liberal Democrats; the next day a deluge of the Alt-Right, the climate deniers, the privatization shock troops, the billionaires who have been living in gated bubbles for the last decade or more.

Yet the chattering classes are not at the moment admitting that these election manipulations made a difference  — any more than they said, in 1963, that there had been a coup d’etat as opposed to a shooting by a lone nut. It was too unthinkable then, it is too unthinkable now.

Instead, everyone is mincing around the obvious truth of it, like the onlookers around a corpse at a murder scene. One reason no one wants to face it is that Clinton was such a profoundly flawed candidate. It is sort of like, how bad can it really be? Maybe he’ll work out, etc.

I say that not because Trump is a Republican but because he is a liar, a crook, and a con artist. Ask Tony Schwartz, who wrote The Art of the Deal with him; Read the late Wayne Barrett’s books on Trump. Ask Tim O’Brien, another biographer. Ask David Cay Johnson, who followed Trump’s career for 30 years and published The Making Of Donald Trump this last summer. Ask the hundreds of women groped, the thousands of workers stiffed, the tens of thousands of people conned.

I notice that Ringling Brothers has folded its tents. I’ll miss it all. But for the next three years we will have a bigger circus on our screens. And no one will be laughing, except Vladimir Putin and Steve Bannon. They will be in stitches. The American people will now be the people walking behind the elephants, trying to shovel up the shit as fast as it comes out.