Italian voters have set off a political earthquake, massively rejecting constitutional reform, forcing their prime minister from office and clearing the way for Trump-inspired political parties to grab control.

Italy’s Prime Minister Matteo Renzi said he will resign after voters rejected a set of changes he demanded to the constitution. They were meant to reduce the size and power of the Senate — and prevent it from bringing down governments.

Italy has had 63 governments in 70 years.

“’No’ has won in an extraordinary fashion,” Renzi said on Italian television, struggling to fight back tears. “Fighting a political battle against someone is easy, but fighting for something is more beautiful.”

The fate of Renzi is set to rattle Europe because of who might replace him. Though it was not a referendum on the European Union, the massive ‘No’ vote opens the door to opposition parties with plans to exit the currency union.

Italians have angrily turned against their pro-European government over a lifeless economy as well as the failure of the EU to come to their aid while a record number of refugees and migrants flood the country’s borders.

Here are the biggest winners and losers from Italy’s landmark ‘No’ Vote.

Beppe Grillo and “The Amateurs”

Millions of Italians are giving the ‘V’ sign as the symbol of the Five Star Movement, while its founder, comedian Beppe Grillo, is calling for snap elections. Traditionally, for his supporters, the V sign stands for both victory and a vaffanculo! (“Fuck Off!”) to the political powers that be. 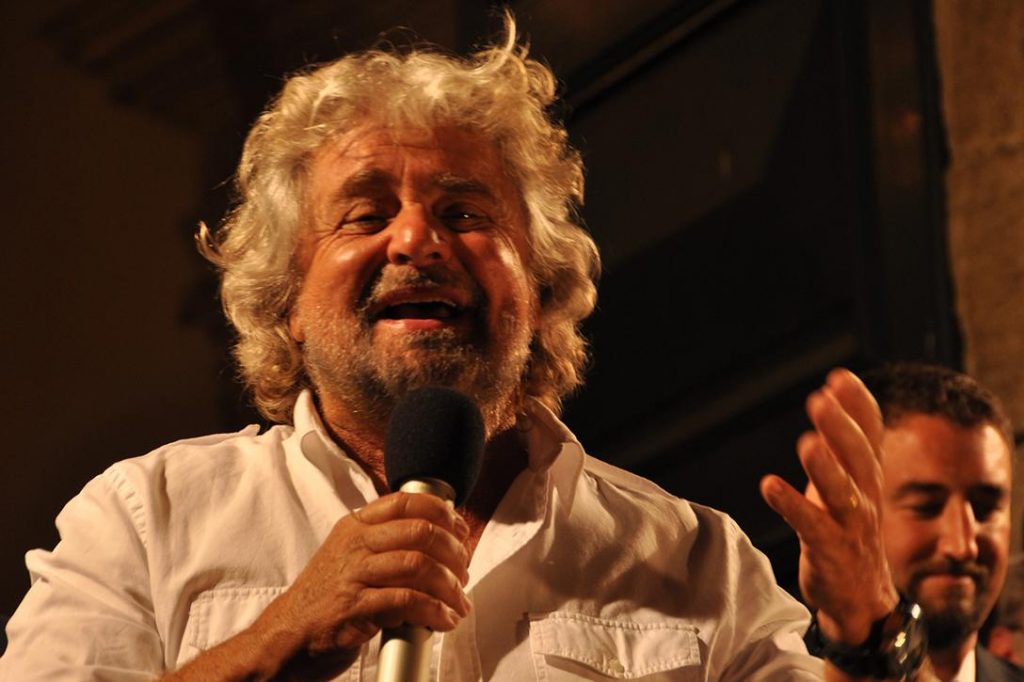 Polls show Five Star is now the country’s most popular political party by a narrow margin, and that it stands to benefit the most if early elections are called. The party has already won local elections in Rome and other cities earlier this year.

Despite his environmentalism and proximity to the political left, Beppe Grillo is fixated with Donald Trump. In the run-up to the referendum, Grillo recorded a bizarre video in front of a TV playing Donald Trump’s US Election Night speech.

Grillo has hailed both Trump’s victory and the Brexit vote, declaring in a Euronews interview: “The amateurs are conquering the world because the ‘experts’ destroyed it.”

Italy’s most popular comedian, Grillo launched the Five Star Movement to fight the endless corruption of the Italian government. His stage performances dwarf any Trump rally, filling a piazza, or stadium, with a hundred thousand people shouting “vaffanculo!”

“The world is changing,” Grillo told his Rome supporters the week before the referendum. “We have to throw our ‘No’ back in their faces. This is not a political ‘No’, it is an existential ‘No’ and a social ‘No.’ ”

The referendum vote improves the chances that the 80-year-old former prime minister, Europe’s Trump doppelganger, could make a comeback.

One might think the Italians have had enough of his Bunga Bunga, but Berlusconi can now play kingmaker despite recent heart surgery and a ban on holding office. Polls suggest his center-right Forza Italia party, if it joins forces with the far-right Northern League, could compete with Renzi’s center-left Democratic Party or Five Star. Though it’s unlikely, he could even form a coalition with the Democrats.

The ‘No’ vote will encourage this movement’s youthful leader, Matteo Salvini, in his quest to transform the Northern League into a mainstream party with Trump as its role model.

Salvini, arguably the most racist politician in Italy, met with Trump last spring in Philadelphia. Trump said he hoped he would become the prime minister of Italy, according to Ansa news.

In the wake of Trump’s victory, Salvini has decided on a run to be the country’s next prime minister.

Renzi’s decision to spend much of 2016 fighting for constitutional reform was a gamble. His pledge to resign in the event of a ‘No’ vote was political suicide. The former mayor of Florence, Renzi, 41, has just celebrated 1,000 days in office.

One of Europe’s political stars, and a self-styled “Demolition Man” for his determination to shake up Italian politics, Renzi has demolished his premiership and maybe his party, too. It didn’t help that leading members of his Democratic Party (Partito Democratico) were opposed to his proposals.

Renzi has unwittingly advanced Five Star’s prospects by pushing a new electoral law – the Italicum – that gives the most popular party in an election a jackpot of extra seats in the lower house of parliament (40% of the vote = 54% percent of seats). He did this assuming his Democratic Party (PD) would be the beneficiary.

In the wake of Renzi’s departure, there could be snap elections, but it is more likely that his party will form a new “caretaker” government for at least a couple of months.

The behind-the-scenes battle to prop up Italy’s banks suddenly threatens to become a lost cause.

Last week, the British daily The Financial Times warned that a “No” vote could lead to multiple bank failures in Italy.

The Monte dei Paschi di Siena, the world’s oldest bank, needs $5.3 billion in the next few weeks or it will collapse.

At least half a dozen other Italian banks are on the verge.

The euro is potentially the biggest loser – and that’s why financial markets are already freaking out.

Beppe Grillo has long argued that Italy should drop out of the euro and promises to hold a referendum on exactly that. Matteo Salvini has pledged to quit the euro if he wins the next national elections. Even Berlusconi has written on his Facebook page that “Leaving the euro is not a blasphemy.”

There are massive legal and technical hurdles that would make it difficult for an Italian government to bring back the Lira. For one thing it would require changing the constitution. But a looming debt crisis could be the trigger.

The McKinsey Global Institute published shocking statistics earlier this year showing that 97% of Italian households experienced flat-to-falling incomes from 2005 to 2014.

Italy’s government debt has arguably spiralled to a point of no return. At almost 133% of GDP, its level of debt is second only to Greece in the eurozone. Its economy cannot grow its way out of the debt trap, in part because Italy replaced a currency it could devalue, the Lira, with one it can’t. The International Monetary Fund says the Italian economy will not regain its 2008 level until 2025.

A sovereign debt crisis might force Italy, like Greece, to put itself under the control of the “Troika” — the European Commission, the ECB and the IMF. Like Greece, Italy would become an EU protectorate, run by EU decree.

But Italians might decide they would rather live without the euro than without democracy.