Desmond Meade has a law degree from Florida International University. However, he is not allowed to practice law in the Sunshine State — and he cannot vote. That’s because Meade is an ex-felon and even though he has paid his debt to society, Florida is not yet done making him pay.

Instead of leaving Florida to practice law in another state, Meade now heads the Florida Restoration Project, which is trying to end the disenfranchisement of felons. The Sunshine State, which once again might decide the winner of a presidential election, is home to nearly 1.7 million current and former felons — the vast majority of whom will have no say in who will lead the country in the next four years.

While most states don’t allow incarcerated felons to vote, Florida is one of three states that also bars those felons from voting, even after they have served their sentence. In total, there are nearly six million disenfranchised felons in the country, according to a 2015 study conducted by the Sentencing Project, meaning that Florida is home to a quarter of them.

It should come as no surprise that African Americans and other minorities are disproportionately affected by this voter suppression effort.

Since Florida is once again expected to be a key state in this election with just a few thousand voters deciding the outcome, it is also apparent that these disenfranchised voters could probably have stopped Donald Trump from winning the state — and the presidency.

“The most telling [way voters are being suppressed in Florida] is the felon disenfranchisement policy,” Meade told WhoWhatWhy. He should know. Meade struggled as a youth. He had several run-ins with the law for minor infractions and was eventually convicted of felony possession of a firearm.

Meade is a great example of a felon who turned his life around. He attended Chapman Partnerships’ drug rehabilitation program and, upon completing it, went on to get his law degree. But he remains ineligible to vote.

Pamela Goodman, president of the Florida League of Women Voters, notes that there was a brief time when it looked as though the law would change. In 2007, steps were taken to automatically reinstate voting rights to most ex-felons, but Gov. Rick Scott blocked the effort when he took office in 2011.

While ex-felons can theoretically get their voting rights reinstated by applying for clemency, very few of these petitions have been approved under Scott’s aegis.

Jared A. Nordlund, Florida senior strategist at the National Council of La Raza, says that a significant reason for the high numbers of disenfranchised ex-felons in Florida does not have to do with provisions in the law itself, but rather in getting the governor and the clemency board to grant clemency for ex-felons after they have completed their sentences.

“If you’re a convicted felon and you’ve served your time and you’re eligible to become a part of the voting population again… basically the governor has to sign off on you being able to vote again,” Norlund said.

“When Charlie Crist was governor, he would have that clemency board go through a lot more [petitions] and restore rights. Under Governor Scott, it hasn’t been as many as that. It’s a process in Florida. It’s not an easy one for most people to go through to get their rights restored.” 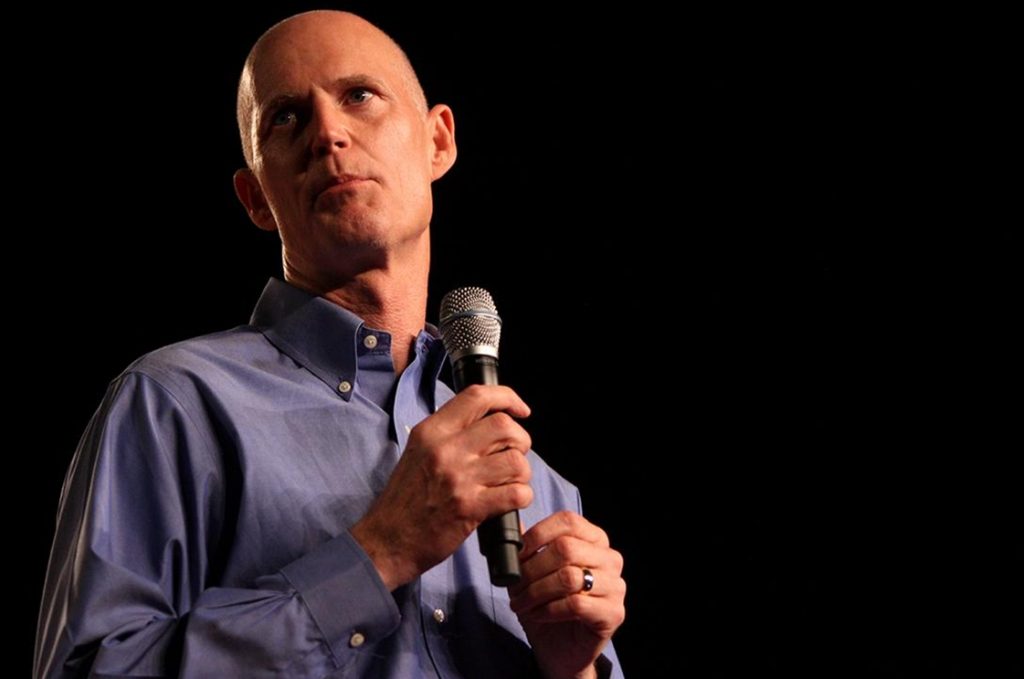 Scott, a staunch Trump supporter, has taken other steps to ensure that the Republican candidate wins Florida. Last month, he refused to extend voter registration, which officially ended October 11, in the wake of Hurricane Matthew, which made it impossible for would-be voters to get to registration places for several days. The Florida Democratic Party filed a lawsuit against the governor for his decision; the date was later extended to October 18 by a federal judge.

“I think there’s a firm belief that a more inclusive democracy is a more vibrant democracy,” he said, adding that elected officials should institute policies that make voting as easy as possible for as many people as possible.

In two years, voters will get to decide if they want to re-elect Scott or replace him with somebody in favor of a more inclusive democracy. However, unless something changes drastically before then, the voices of those Floridians with the biggest stake in that election will, once again, go unheard.