Cue the theme from Jaws. Just when you thought it was safe to go back into the water, the prospect of the US agreeing to at least one, if not two, massive trade deals is emerging as a distinct possibility.

A few months ago, it looked like both controversial trade agreements were foundering.

Back then, both major party presidential candidates declared themselves opposed to the pending Trans-Pacific Partnership (TPP), which the White House had negotiated with 11 Pacific Rim nations, making it one of the largest trade deals in history.

At the same time, Britain’s recent vote to exit the European Union appeared to knock the wind out of the sails of negotiations between the EU and US on the Transatlantic Trade and Investment Partnership (TTIP).

But like Glenn Close in Fatal Attraction, these trade pacts seem to be pretty hard to kill.

President Barack Obama certainly hasn’t given up. He is campaigning hard for Congress to approve TPP by the end of this year. On September 16, Obama met with congressional leaders to urge passage of TPP during the post-election “lame duck” session. He even brought in Republican governor John Kasich (OH) to help make his case.

The US Trade Representative and the EU also haven’t halted their discussions, despite widely reported comments from French and German officials this summer that the deal was moribund. The next round of trade talks is set for early October, likely in New York City.

Indeed, German opponents of TTIP were so concerned that they organized multi-city demonstrations on September 17. (The demonstrations targeted not only the potential deal between the US and the EU, but also an agreement between the EU and Canada, which is far closer to being finalized.)

There is a “real danger” that TPP could be approved by Congress “right after the [November] election when members are the least accountable,” Ben Beachy, senior policy advisor for the Sierra Club’s Responsible Trade Program, told WhoWhatWhy. 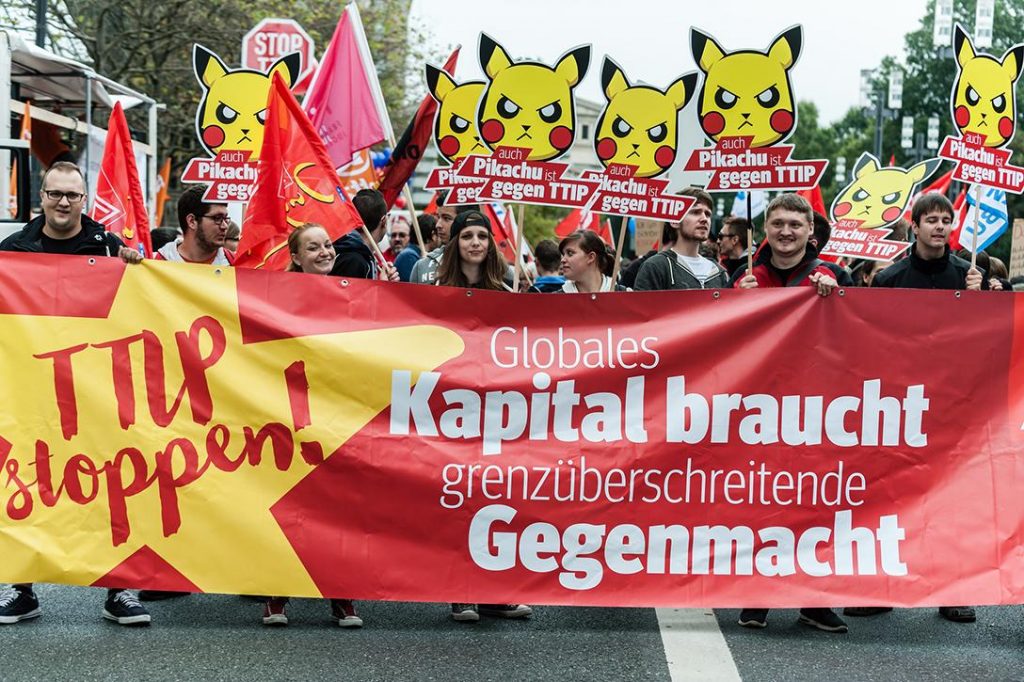 While the danger of TPP’s passage is “more imminent,” Beachy says, “that doesn’t mean we should forget about TTIP.” Despite public protests in Germany and across the EU, he says, negotiators on both sides of the Atlantic certainly “haven’t forgotten” about that trade deal. It’s crucial, Beachy contends, that citizens voice their opposition to both agreements as a “first step to saying ‘Yes’ to a trade model focused on people and climate, and not corporations.”

TPP and TTIP share more than a few of the same letters of the alphabet. Secrecy is one common trait. The public and most members of Congress have been kept in the dark about the details of both. The TPP’s text was only publicly disclosed after it was finalized by the 12 nations who agreed to it, pending the approval of their respective legislatures. TTIP, still under discussion, remains a black box to the American public.

Both TPP and TTIP have been widely criticized by environmental, public health, consumer, and labor groups. Trade deals often focus on reducing tariffs on goods sold between two or more countries.

But these deals are very wide-ranging. Opponents charge that they could lead to a weakening of safety standards for food, pesticides, toxic chemicals, prescription drugs, medical devices, and consumer products, and give multinational corporations far greater power to influence the public policies of individual countries that sign on to them.

In the US, there is concern that TPP and TTIP may also limit government attempts to protect the environment, label hazardous products or genetically modified foods, and oversee chemical safety regulations.

Business groups have touted the economic benefits of both TPP and TTIP. But a  study of TPP’s impact, conducted by the US International Trade Commission, found that the benefits were minimal — adding about $42 billion to the economy by 2032, or an increase of .15 percent in US gross domestic product (GDP). During the same period, the US would lose nearly 130,000 jobs because of TPP.

Critics charge that corporations will be the big winners, since the deals would enhance “regulatory cooperation” among nations, making it more difficult for one nation to adopt stricter standards that could be challenged by trade partners. Corporations also strongly support Investor State Dispute Settlement (ISDS), which gives companies operating in foreign countries the right to challenge policies that harm their bottom lines in special tribunals, bypassing domestic courts. Corporations won that right in TPP. The EU has been more resistant, but the concept remains on the table. 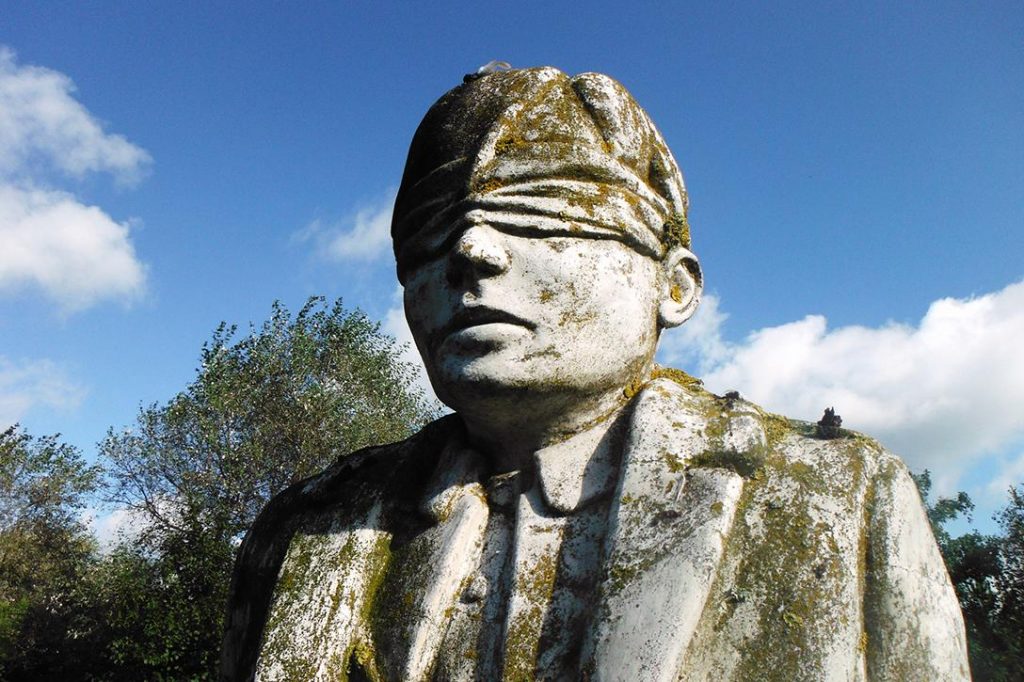 Grassroots advocates are not taking any chances. They continue to churn out studies that make the case that these trade pacts are harmful to the public. A new study by the nonprofit Institute for Agriculture and Trade Policy (IATP) contends that trade deals like TPP and TTIP sabotage global efforts to address climate change.

“Climate is not addressed at all” in these mega trade pacts, Ben Lilliston, the study’s author and IATP director of corporate strategies and climate change, told WhoWhatWhy. He is particularly concerned that corporations wield too much power over trade negotiations.

As a result, a common element in existing and pending deals is ISDS, which has been used to thwart environmental policies, Lilliston says. He points to the current pending lawsuit that TransCanada filed against the US when the Obama Administration refused to approve the Keystone XL pipeline. TransCanada is seeking $15 billion in damages. There have been other ISDS lawsuits opposing government actions to ban fracking and offshore oil drilling, he adds.

But ISDS, as bad as it is, isn’t the only dangerous element, Lilliston says. He notes that “climate policy moving forward” tries to link efforts to limit greenhouse gas emissions with the creation of green jobs that give preference to local businesses. But trade works against these green job initiatives, Lilliston charges.

Taking its complaints before the World Trade Organization (WTO), the US, for example, has successfully challenged both India’s initiative to grow local solar energy jobs and China’s wind energy program. India now is trying to lodge a trade complaint against renewable energy programs in Minnesota, Delaware, Massachusetts and Connecticut for using their green initiatives to spur job growth.

Another major problem, Lilliston says, is that these mega-trade deals favor agribusiness. Industrial farming — with its heavy use of nitrogen fertilizer, which emits the potent greenhouse gas nitrous oxide, and livestock operations that result in “huge [amounts of] animal waste” and produce methane, another greenhouse gas — both thwart efforts to combat global warming.

These trade deals also encourage the exports of products like palm oil. In Malaysia, Lilliston says, palm oil production is leading to more deforestation, another factor contributing to climate change.

Both TTIP and TPP would also give multinational corporations more power over any new rules that individual countries may propose to protect public health and the environment. Lilliston worries that corporations will have too much influence over “regulatory coherence” committees created by these trade deals. The agreements are considered “living documents,” he says, so these committees overseeing the development of regulations will exist long after the ink is dried. The key questions, he says, are who will sit on these bodies, and whom will these bodies be accountable to?

Advocates are both puzzled and disappointed that Obama, who has been such an ardent advocate for global efforts to combat climate change, should be endorsing trade deals that work against these goals.

Adds Lilliston: “It is very troubling and frustrating that they don’t see the connection.