After watching Barack Obama win the support of a large share of young Americans in back-to-back presidential elections, Republican party officials launched an effort to court these voters. But Donald Trump is taking a wrecking ball to these plans — and that could be a big problem for the GOP way beyond November 8.

“I think what Trump is doing is a disaster for Republicans trying to court millennials,” Dr. Jonathan Weiler, a University of North Carolina political scientist and co-author of Authoritarianism and Polarization in American Politics, told WhoWhatWhy.

Recent studies back him up. A Quinnipiac University poll found that only 26% of millennials would vote for him. This response trails behind the roughly 40% of youth voters who supported the Republican candidate in the past three presidential elections.

The GOP is acutely aware of the problem, if not its causes. They began to court millennials in 2013 after surveys confirmed their dwindling appeal among that generation. The GOP’s “Growth & Opportunity Project” highlighted young leaders like Florida Sen. Marco Rubio, who was soundly thrashed by Trump in the primaries.

Millennials — Too Diverse for Trump?

Now, the GOP’s youth drive is seriously off the rails. Geoffrey Skelley, an analyst with the University of Virginia Center for Politics, thinks Trump is the reason.

Skelley noted that the youth population has a greater proportion of non-whites than the 65 and older population. No wonder millennials don’t look back fondly to the days when non-whites had to sit in the back of the bus.

“Non-white voters are more likely to support government intervention in the economy, more liberal and inclusive social policies, and other tenets that more closely match those of the Democratic Party than the Republican Party,” he said.

Benjamin Rasmussen, a former member of the Yale College Republicans, painted a grim picture of the GOP’s future if Trump solidifies his hold on the party.

“Standard Republicans have certainly tainted their perception in the eyes of myself and many millennials by endorsing Trump, and will only become less popular should they continue endorsing candidates as hateful and unqualified as Trump in future elections,” he told WhoWhatWhy.

“Trump has made the Republican Party a bastion of nationalism and xenophobia. Since most millennials like myself find such views morally reprehensible, the GOP will certainly lose support among moderate college students.”

That, of course, is music to the ears of Democratic Party activists like Michael DeLuca, president of the College Democrats at New York University.

“When Trump threatens basic tenets like the freedom of the press or a woman’s right to reproductive health care, those who might not usually participate or volunteer start playing an important role. They start to see how dangerous Trump could be,” he said. 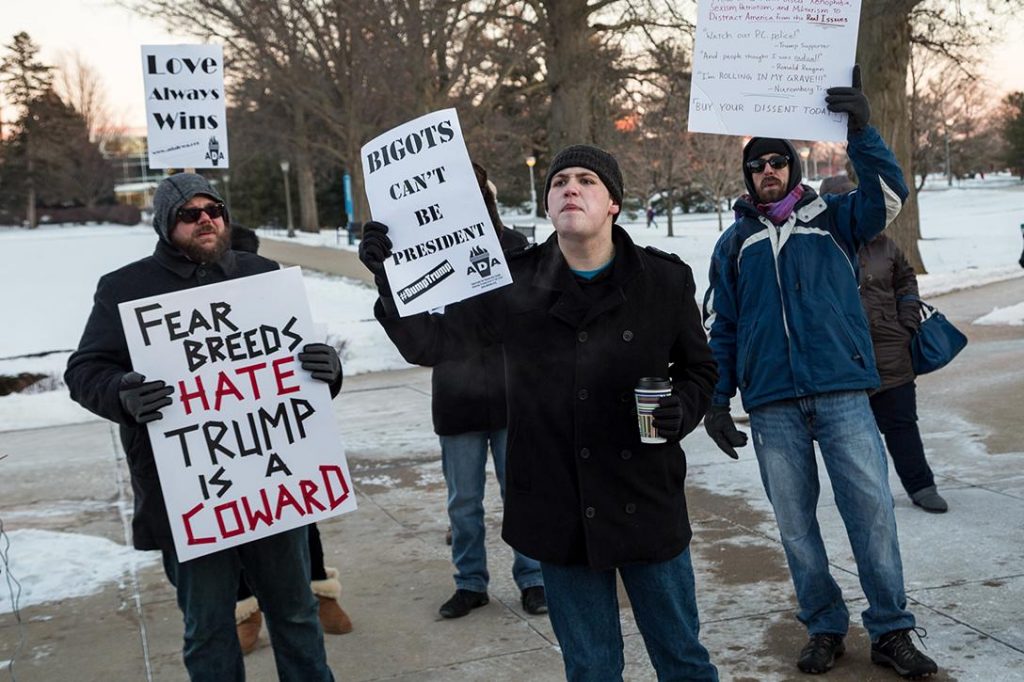 But such views are hardly universal among more conservative millennials.

“Donald Trump speaks about issues young voters care about like creating jobs and lowering student loan debt, and more than most candidates he has shown a willingness to go to campuses and to use the social media channels young voters use,” Justin Giorgio, Communications director of the College Republican National Committee (CRNC), told WhoWhatWhy.

“College Republicans continue to believe in and support principles that Republicans have always believed in,” Giorgio added. “Freedom and liberty are timeless, and fortunately, this generation of Americans craves these values in our everyday lives.”

What explains Trump’s low approval ratings among millennials, La Mastra said, is the media’s “false characterizations of him and his policies.” He predicted the candidate’s ratings will bounce once the debates commence and the Trump campaign begins spending more money advertising on millennial-friendly platforms like YouTube and Instagram.

But with Trump’s rhetoric already being broadcast 24/7, it is unlikely that a few commercials on social networks will move the needle in favor of the GOP nominee.

The Republican’s Growth & Opportunity Project declared, “the Republican National Committee must… fundamentally change the tone we use to talk about issues and the way we are communicating with voters.”

Trump’s campaign rhetoric certainly reflects a change in tone  —  though not likely what the GOP had in mind.