The message of the Democratic National Convention has been clear to all: Fall in line, please.

But outside the convention hall, the message was equally clear: Never.

Leading up to the moment Hillary Clinton accepted the Democratic nomination for president Thursday as the first woman ever to be nominated by either major party, nearly all the rhetoric had been designed to showcase party unity. Everyone from Barack Obama on down reinforced the not-so-subtle message of the week: Get behind Hillary, or Trump wins. So, too, did Bernie Sanders.

And, in fact, recent polls seem to indicate that Clinton has been picking up the support of many, if not most, of those who favored Sanders. 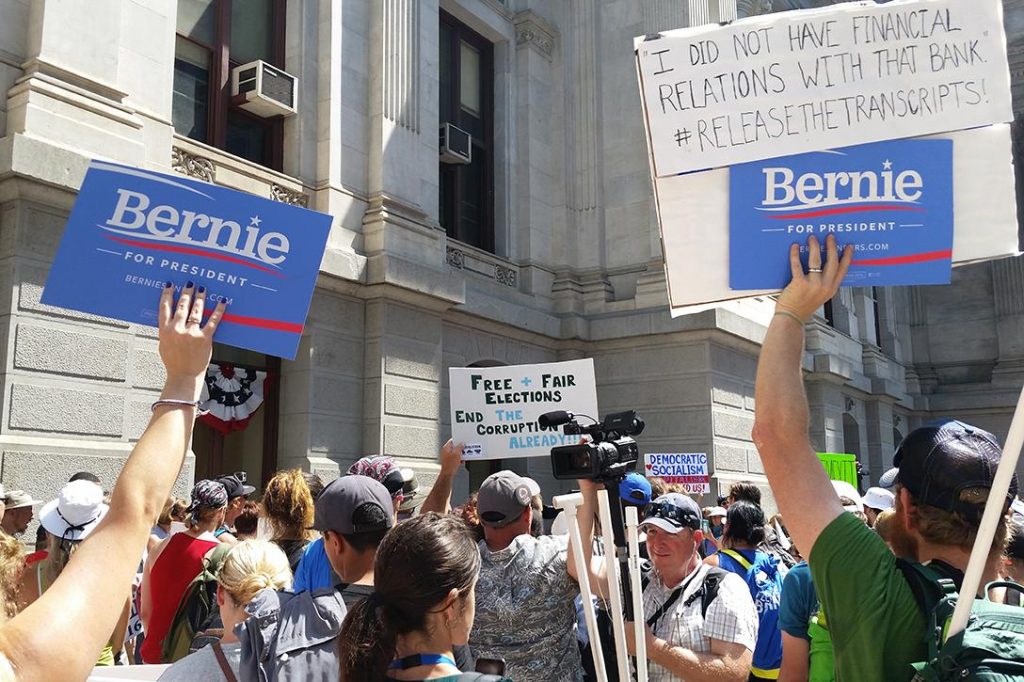 But for Sanders’s most hardcore supporters who were protesting in the heat — and not inside the air-conditioned arena — there’s nothing she could say that would ever get them to vote for her. And even if they represent a minority, their emotions are strongly felt.

“Absolutely not,” said GG Winter, a retired electrician from Oakland, CA, who was protesting against the convention on Monday. “She’s too much of a liar.”

Winter told WhoWhatWhy she was unimpressed with any of the progressive tenets of the Democratic Party’s platform, especially the changes that were the result of negotiations between the Sanders and Clinton camps following the primaries.

“‘Oh I couldn’t get it through Congress’”, Winter said mockingly. “‘I really tried to do it but I couldn’t’ — she’s gonna give a million excuses. She’s not even gonna look at that paper.”

For nearly all those protesting, it was impossible to take Clinton at her word that she would support any of the progressive goals she had endorsed.

And that is a real problem for the Democratic nominee because these staunch Sanders backers are not just lost votes. They are also the people who will knock on doors and make phone calls. In other words, they are the lifeblood of a campaign. But for now, their activism is targeting Clinton and not helping her.

“Talk is cheap, and I just look at her actions instead of her words,” James Perault, 28, a lumber mill employee from Austin, TX, told WhoWhatWhy. “If you look at her vice president pick, [Virginia Senator and former governor Tim Kaine], that says everything to me right there.”

Others amplified that theme.

“Hillary has already showed us time and time again that she cannot be trusted, so how am I supposed to believe that her policies are not just symbolic?” asked Kaycee, a masters student from Liberty Center, OH who protested in Philadelphia. She said she believes that only a vice-presidential nominee choice — such as a hardcore progressive like Massachusetts Senator Elizabeth Warren — could assuage fears that Clinton’s support for the left was all talk. (Warren, like just about every other Democratic officeholder in Washington, is now a strong Clinton supporter.)

“She lost the progressives’ vote by choosing a centrist,” she told WhoWhatWhy. 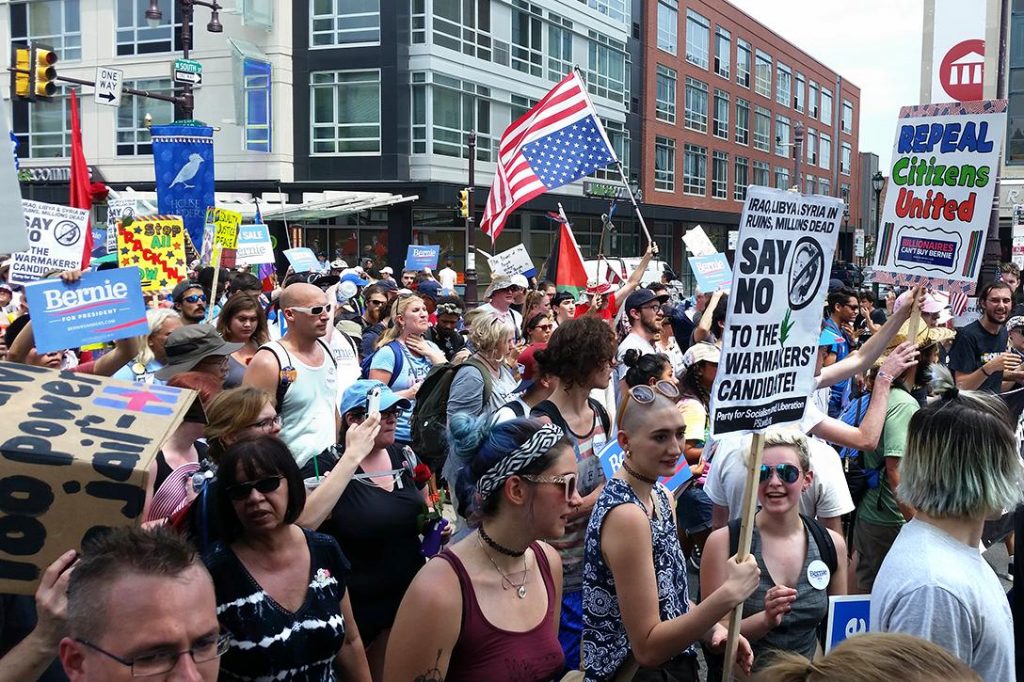 “Centrist” is too tame a view of Kaine for Winter, the retired electrician from California. “Call him a Republican. Come on. He’s not a freaking Democrat,” Winter told WhoWhatWhy. “He’s for the TPP. He’s for all the bad stuff.”

Among the protesters, there nevertheless seemed to be a small glimmer of hope that Clinton could change. Many still hope that Clinton will move to the left on issues that they care about — free college tuition, single-payer health care, police reform, and a limit on military adventurism abroad.

Given the unwavering positions of Sanders’s hardcore supporters, it is difficult to understand how Clinton would see the benefit in moving more to the left than she already has.

And, indeed, if the convention is any indication, it is more likely that Clinton, despite her strong praise of Sanders in her acceptance speech, may be planning to pivot to the center to strengthen her general election appeal

Among the speakers in Philadelphia were Michael Bloomberg, the multi-billionaire and former  Republican mayor of New York, and former General John Allen, who was greeted by chanting of “No more war” from Sanders delegates within the convention hall. These speakers were meant to show Clinton’s cross-party appeal in hopes of attracting independents and moderate Republicans.

That strategy seems to have paid dividends. Numerous Republicans praised this year’s DNC, with its optimistic patriotism, support for the military, and mentions of God, as the kind of convention that Republicans would normally hold if it were not for Trump.

If the polls show that approach works, the risk of Sanders holdouts marginalizing themselves increases. After all, why would Clinton try to appease the staunchest supporters of the Vermont senator if there is no chance that they will vote for her?

Nevertheless, Sanders backer Jessica Savercool, 21, of Delaware County, PA, thought that Clinton still had a responsibility to reach to the left and try to bring voters over, even as she made it clear she would not be one of them.

“Some might,” she told WhoWhatWhy. “I can’t really speak for all of them.”

It is possible that the views of Sanders supporters will change over time. After all, their refusal to switch to Clinton in part reflects their feeling that Sanders had not been treated fairly and those wounds are still raw.

“His running the way he did brought out a lot of problems I think we have with our election system,” said Sarah Hoss, a professor of human anatomy from Oklahoma City. “A lot of people out there were disenfranchised.”

Hoss told WhoWhatWhy she was saddened by encountering first time voters who said, after voting problems “I don’t ever want to vote again.”

“If everything was done right, and Bernie lost, I don’t think people would be here today,” Hoss said.

“You want to believe in the system.”

As it stands now, few of these Sanders holdouts believe in the system. And there were many of these voters in Philadelphia.

Their distaste for the election to come was evident in the sign held up by Jessica Savercool. It read: “The lesser of two evils is the evil of two lessers.”

Neither of the major candidates seemed worthy to those reached by WhoWhatWhy. Many supported Jill Stein, the presumptive Green Party nominee, and others found themselves not sure what they were going to do.

But it was clear that Hillary Clinton was beyond the hope of people on the left who would normally be among the Democratic party’s most reliable supporters.

When asked by WhoWhatWhy what Clinton could do to change her mind, Clover Williams, 58, a schoolteacher from New Mexico, made her distaste clear, implying that Clinton would need to undo many of the political positions she’d taken over the years.

“She could get a time machine.”

Hillary Clinton at a rally in Philadelphia after the 2016 Democratic National Convention.  Photo credit: neverbutterfly / Flickr (CC BY 2.0)

32 responses to “#BernieOrBust Faces a Choice between Principles and Pragmatism”