The movement to force colleges to divest from the fossil fuel industry won a major victory recently. The University of Massachusetts announced it would no longer invest its $770 million endowment in oil, coal and gas companies.

UMass became the first major public institution of higher learning to take this step. The decision — by a unanimous vote of the UMass Foundation Board of Directors and resolution of support by the Board of Trustees — followed a weeklong April sit-in at the school’s administration building in Amherst, MA.

During that protest, 34 students were arrested and charged with trespassing after failing to comply with a police dispersal order.

Student activists have been busy at other campuses as well, although not always with the same success. This spring alone, at least 62 students were arrested during fossil fuel divestment protests.

“We believe that greenhouse gas emissions will have profound consequences on the lives of current and future generations, and the resulting disasters of climate change will disproportionately affect low income and minority groups, both already marginalized communities.”

In 2015, 19 Yale students were arrested for trespassing after they remained in an administrative building following its 5 p.m. close. Despite their efforts, the activists at the Ivy League school have not yet convinced the university to fully divest its $25.6 billion endowment — the nation’s second largest.

On April 12, Yale University’s Chief Investment Officer David Swensen announced that the school would be divesting from one coal and two oil sands companies. This total amounts to just under $10 million.

Yale’s investment portfolio is not public and therefore it is not clear how much of the university’s money is still tied up in fossil fuels, but the activist group Fossil Free Yale says this latest decision is not enough.

“We consider it a partial victory, because it is exciting that the University is now considering climate change in its investment portfolio,” Chelsea Watson, Communications Director for Fossil Free Yale, told WhoWhatWhy.

“However, there is nothing stopping them from reinvesting, and there is no talk of the ethical implications of these companies, which is a key tenet of divestment.”

Fossil Free Stanford has experienced a similar partial victory. The university agreed in May 2014 to divest its $22.2 billion endowment from the coal industry, but it still holds investments in gas and oil. In April, the Board of Trustees voted to not divest from these industries.

A November 2015 campaign at Stanford saw more than 100 students occupy the main quad. More than 450 faculty members, of about 2,150 total, have expressed support for Fossil Free Stanford, and more than 700 students to date have pledged to withhold donations to the university.

Other student activists have convinced their universities to divest fully without having been arrested, such as those at Pitzer College, which unanimously adopted its Fossil Fuel Divestment-Climate Action Model in 2014.

The small liberal arts school in California has a “culture of shared governance,” Donald Gould, chair of the Pitzer College Board of Trustees’ investment committee, told WhoWhatWhy, adding that the Board took the divestment issue seriously from the start.

Gould noted he sympathizes with colleges like Yale that may not have found the same success because they are so intertwined with both corporate America and the US government. “Pitzer is younger, does not have a huge endowment, and is not beholden to special interests,” he said.

Still, Gould said that although protesting to the point of arrest may be effective, “I am not advocating that students or anyone else break the law. It can have a polarizing effect on the community if the activism gets to the point that people think it’s disruptive.” He said that student activists should focus on persistence, continuity and rational arguments. 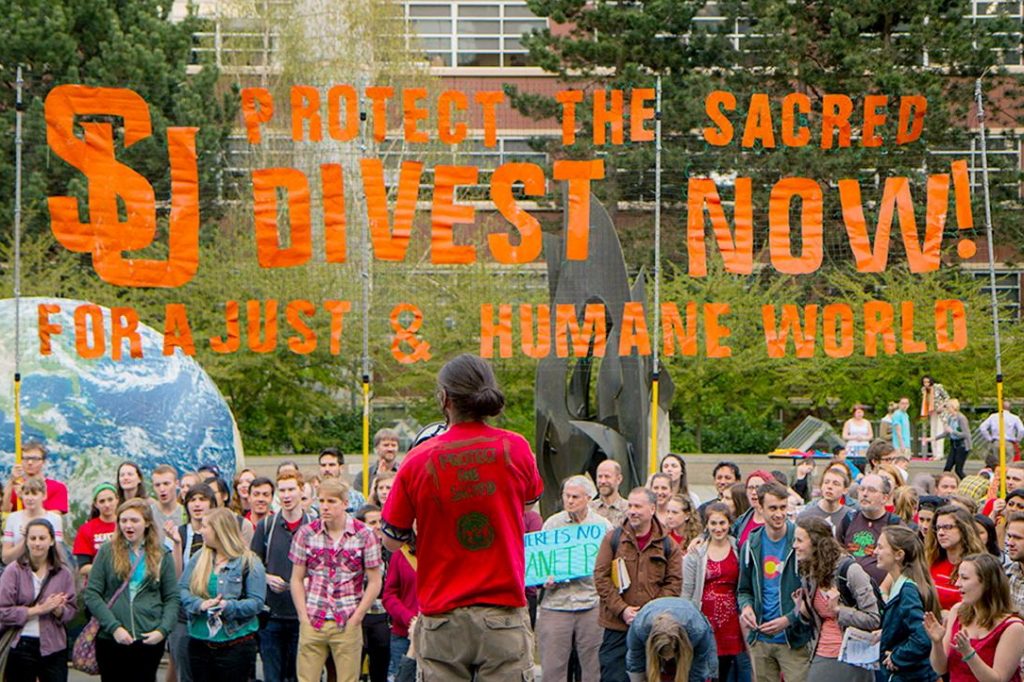 Student activists from different college campuses coordinate with one another in support of each other’s efforts. Chelsea Watson, communications director for Fossil Free Yale, said his organization has partnered with the Divestment Student Network and the Lower New England Division.

“Together, we coordinate our actions and escalations so we can align and bolster each other’s movements,” she said. “We also organize convergences and trainings so we can learn about movement building and environmental and climate justice. We have scheduled phone conferences and webinars to either discuss specific topics or just give updates.”

Hanna Payne, a student organizer at Stanford, which has not agreed to full divestment, discussed student activist collaboration at her university as well. “We’ve recently joined a coalition of schools campaigning for reinvestment of Stanford’s dollars in grassroots, community-led climate solutions, and are currently planning the launch of the reinvestment campaign,” she said.

Why are student activists so fervent in their protests against the fossil fuel industry?

“We believe that greenhouse gas emissions will have profound consequences on the lives of current and future generations, and the resulting disasters of climate change will disproportionately affect low income and minority groups, both already marginalized communities,” Payne said.

However, Gould, the member of the Pitzer College Board of Trustees, said that divestment is not a silver bullet.

“One has to accept that divestment is not a perfect tool,” he argued. “There is no company that is completely bad or completely good. There are shades of grey.”

Gould added that the point of adopting a fossil fuel divestment plan at Pitzer was not to change these companies but to align the college’s policies with its values and to help alter the conversation about the earth’s climate.

The efforts of students across the country to get their schools to divest may not change the behavior of some fossil fuel companies in the short run. However, it is an indication that the generation that will be disproportionately affected by the planet’s warming is taking an active role in combating climate change.