Anyone following the presidential election news coverage from afar might assume that, just like the Republican contest, the Democratic race had devolved into a mud wrestling exhibition as it reached the Empire State. The media laid it on thick:

“..four rabid cats in a paper bag,” was how Glenn Thrush of Politico described the state of the New York Primary.

The Hill reported worries among top Democratic leaders that the fight in New York was risking the chances of both candidates come November.

But New York voters are not seeing it that way at all.

“I think it’s been the most graceful campaign that I’ve ever seen,” said Jens Rasmussen, a 45-year-old Bernie Sanders supporter, who attended a rally on April 5th in the Brooklyn neighborhood of Greenpoint along with his dog.

Rasmussen is hardly an exception in his sentiment. WhoWhatWhy attended three Sanders rallies and a Clinton rally, looking for the ruthless fight that the media has declared. We did not find it. Nor did we find hard feelings between the supporters of each candidate.

“This is the first election where I’m not opposed to the other candidate,” said Albama Islami, a 24-year old marketing associate who came to support Hillary Clinton at her March 30th speech at the Apollo Theater in Harlem. “I think it’s a much cleaner race than most of the races we’ve had.” 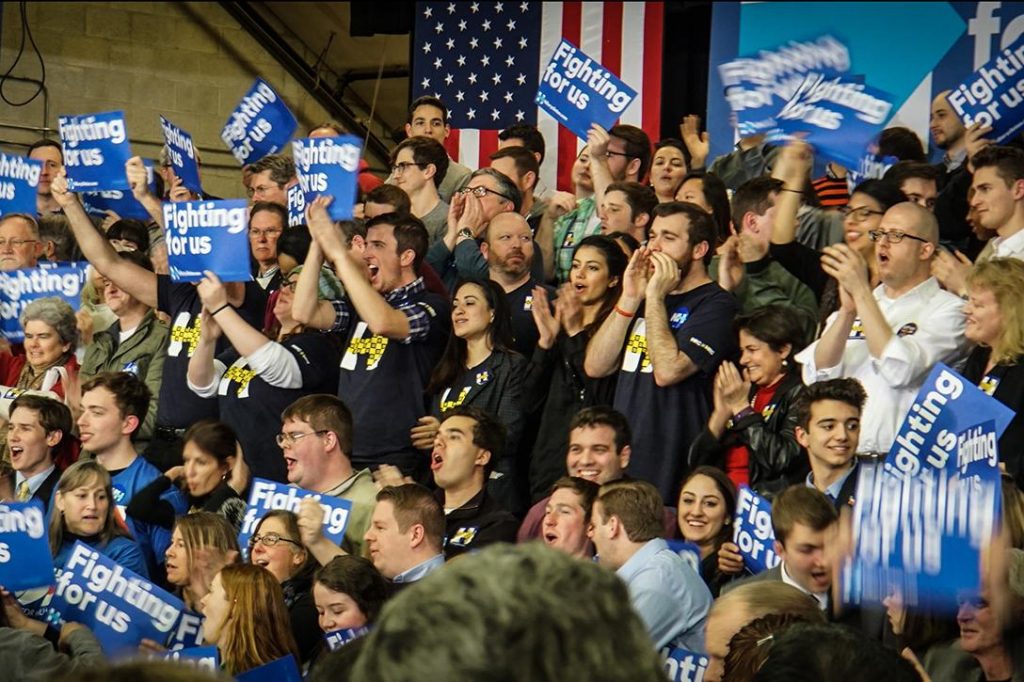 “I would definitely vote for Hillary over them,” said Shannon Dennard, 34, almost laughing at the question.

As a freelance location-scout for television shows, whose access to healthcare is often in flux from not having a steady employer, Dennard sees healthcare expansion as a fundamental need in her life.

“I hope Bernie wins,” Dennard said. “I really, really love him, but I will definitely vote for her over whoever the Republican candidate is.”

Chuck Hershey, 62, a network engineer attending the April 16 Bernie Sanders rally at Prospect Park in Brooklyn, was one of those rare few who disliked Clinton enough to say he would stay home in November rather than vote for her. But even he felt that the tone of the campaign has remained remarkably easy-going.

“The press is trying to make this into a deathmatch that isn’t going on,” Hershey told WhoWhatWhy. “They’re trying to create some controversy.”

It is an astute observation. A boring Democratic race would not have generated ad sales and page views for corporate news outlets. So the media has tried to make the contest between Clinton and Sanders into something that it is not. While the Republican field, headlined by Trump, has been tearing each other apart, the Democratic race has been tame by any measure.

Sanders has consistently taken the high road when presented with opportunities to take shots at Clinton that were unrelated to policy disagreements. He stunned the political class when he said he had no intention of talking about the former Secretary’s “damn emails” at a debate in November. While his supporters, the infamous “Bernie Bros,” might sometimes go overboard and surrogates had to walk back comments they made, the headliner of the campaign has stuck to his pledge to run a different kind of campaign. And Clinton has also done her part to largely make the Democratic race about policy differences.

But that has not stopped the corporate media from trying to stoke the flames.

Hershey, the Sanders-supporting network engineer, pointed to the back-and-forth about which candidate was “qualified” as an example of media smoke without fire.

That spat was certainly aided, or perhaps even created by, media outlets looking for a good story.

The argument became heated when an April 6 Washington Post headline said that Clinton had questioned whether the Vermont senator was “qualified,” during an appearance on MSNBC’s Morning Joe. Sanders responded in kind, stating at a rally in Philadelphia that Clinton herself was unqualified because of her donations from Wall Street and her support for the Iraq War.

Except that, despite the Washington Post headline, Clinton never called Sanders unqualified in her interview. Though host Joe Scarborough kept trying to goad her into attacking Sanders’s qualifications, Clinton repeatedly stopped short of saying Sanders was not qualified.

Both candidates later tried to walk back their comments, but the media narrative of the two opposing sides tearing down each other’s credentials had already settled in.

Perhaps in response to media-fed expectations, the debate in Brooklyn on April 14 was more intense than the previous skirmishes between the candidates, with both attacking each other’s records, occasionally interrupting and shouting over each other. Still, it was largely a debate on the issues — a far cry from what the GOP has delivered for the most part.

“I think he’s being a little more aggressive, but he has to be in the debates,” Gina, 23, said of the Vermont senator at a Sanders rally on the 17th.

The nurse, who requested to not be identified by her last name, still felt that the Democratic contest was extremely tame compared to the GOP debates, which she described as “a comedy show.”