Israel and Russia agreed on Monday to coordinate military actions over Syria in order to avoid accidentally trading fire, Prime Minister Benjamin Netanyahu said during a visit to Moscow.

Briefing Israeli reporters after he met Russian President Vladimir Putin, Netanyahu said he had come with the goal of “prevent[ing] misunderstandings between IDF (Israel Defence Force) units and Russian forces” in Syria, where Assad is fighting Islamist-dominated insurgents in a civil war.

Netanyahu added that he and Putin “agreed on a mechanism to prevent such misunderstandings.” He did not elaborate. There was no immediate comment from the Kremlin….

Putin, who shares Western concern about the spread of Islamic State influence, has pledged to continue military support for Assad, assistance that Russia says is in line with international law. Russia has been focusing forces on Syria’s coast, where Moscow keeps a big Mediterranean naval base. The United States, which along with its allies has been flying missions against Islamic State insurgents in Syria, has also been holding so-called “deconfliction” talks with Russia.

This is a climate-change nightmare: Droughts rage and fires burn, while evil ALEC and hapless Democrats dither (Russ)

“No one is being serious enough and history will judge us harshly — especially since a green economy lifts us all….Just as same-sex marriage and the minimum wage were left to state referenda or courts to decide, climate policy is left to executive orders and treaties that don’t need ratifying. That Congress acts only to obstruct is mainly the fault of Republicans and the fossil-fuel industry, but also of Democrats who won’t talk about tough issues till their pollsters blow the all’s-clear whistle. When a progressive political party won’t inform and arouse the public, people question its reason for being.”

Minnesota media mogul Stanley Hubbard’s post-debate donations to Rubio, Fiorina, Carson, and Christie may signal who mainstream Republicans find acceptable as alternatives to Jeb Bush. “Hubbard said his decision is not a sign that he has given up on Walker, who he continues to support. He likened it to investing in multiple companies on the stock market.” Too late — Walker is out. So that cross-betting seems a wise business move.

In desperation, drooping Jeb Bush drops “I’m my own man” for “I’m a Bush!“ (Russ)

At this point, anything is worth a shot.

The Environmental Protection Agency and the California Air Resources Board claim VW deliberately programmed almost 500,000 diesel cars to emit fewer pollutants under test conditions than during actual use.

“No one expected this” is right. A growing contingent of Republicans are showing support for Bernie Sanders. Is the Right starting to lean Left?

A Surprising Headline to Find in the New York Times: ‘Israel’s Charade of Democracy’ (Milicent)

Israel’s occupation of the Palestinian territories is nearing the half-century mark, and Israel’s new right-wing government offers little hope of ending it. Nevertheless, the new government promises something else of value: clarity. And with that clarity, the opportunity to challenge the prolonged lie of the occupation’s “temporary” status. For if the occupation has become permanent in all but its name, what about the voting rights of Palestinians….

Yes, it still does actually matter if you vote — in many cases. Play it safe — get registered!

They Didn’t Even Really Think it Was a Bomb (Inez B.)

This little free-verse poem on Ahmed, the kid falsely accused of bringing a bomb to school, makes an interesting argument: that authorities must have known it was not a bomb — at least not an active one, because they did not call the bomb squad, evacuate the school, etc. 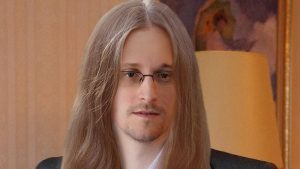 “Edward Snowden is a polarizing figure, and yet for all that has been said about the man responsible for the biggest intelligence leak in U.S. history, it took an artist to show him in a brave new light. Thanks to the work of visual artist Jeff Rosin, we can finally see what Snowden would look like with long hair.

This powerful image has Snowden standing alone, his eyes, framed by his now-famous rimless glasses, set in concentration, and, for the first time, flowing locks that stretch down well past his shoulders. Suddenly, we can envision how he would have felt resolutely brushing his bangs to the side as he prepared to leak the largest trove of government documents ever released….”