Editor’s Note: Below, longtime Middle East correspondent Charles Glass offers his droll, insightful and entertaining personal take on the much-debated threat presented by Iran. He sees every indication that the country is much more interested in business than in war. (To read an excerpt from Charles Glass’s book Syria Burning, please go here.)

There are two Irans. One wants bombs. One wants business. Business Iran, for the moment, is on top. The big bomb goes on ice, and American and European trade comes back. After all, it’s only business. In Iran, even senior clergy are businessmen and have the millions to prove it. Iranians have at least ten reasons to go along with the agreement. They are:

ONE. Iran’s accord with the P5+1 (the five permanent members of the UN Security Council plus Germany) will end the sanctions imposed in 2006 under United Nations Security Council Resolution 1737. The sanctions have crippled Iran’s economy, and pressure to end them is widespread.. A friend of mine, who grows pistachios, a major export, wrote to me recently: “I think if you look at Iran’s development in the last few years, it looks very much like its economic and business interests have surpassed its obsession to prove to the world that it is capable of working on nuclear weapons. Double digit inflation and unemployment and low levels of production and inadequate investment have forced [Ayatollah] Khamenei to reevaluate his priorities. The election of a pro-western president [Hassan Rouhani] shows that the country needs to open up to the world and attract foreign investment. A healthier economy will provide a happier population and greater power and respect in the long run.” The farmer represents growing sentiment in Iran that opening the economy to world trade can help prise the country from the clergy’s iron grip. 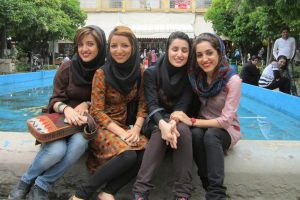 TWO. Despite the shouts of “Death to America” in the increasingly unenthusiastic demonstrations periodically orchestrated by the government, Iranians love Americans. They are about the only people on earth who do. Look at Iraq and Afghanistan, whose people have hated Americans at least since America invaded them.  Or South America, where countries over the last dozen years have repeatedly defied Yankee domination. Or the Arab world, where Americans are more likely to be kidnapped than invited home for coffee. Why do Iranians love Americans? For one thing, most have not seen any real Americans since 1979. Young people don’t remember the thousands of American military advisors with diplomatic immunity and the intelligence agents who guided the Iranian secret police, the much-hated SAVAK, in suppressing dissent. On my visits to Iran before the revolution, animosity towards Americans was ubiquitous. Since the revolution, Iranians have lavished hospitality on me because I was American. Of course, when thousands of American tourists descend on the country that could change; tourists of any kind wear out their welcome fairly quickly.

THREE. American businesses and Iran have already jumped into bed, like a couple who can’t wait for the wedding night. With sanctions still in place, dozens of trade delegations have flown to Tehran. The Iranian oil minister invited seven major US oil companies to return to Iran two years ago, and an oil delegation turned up in Tehran last May. A month earlier, Iran welcomed twenty-two American entrepreneurs, investors and consultants, and the Iranian hosts impressed the visitors with their openness and expertise.  In July, the “Iran-EU Conference on Trade and Investment” met in Vienna, where  hundreds of business people from all over Europe showed up to stake a claim to the Iranian market.. The Wall Street Journal reported that Apple is discussing ways to sell iPhones and open Apple Stores in Iran. Boeing is ready to supply spare parts for the commercial airliners the Shah of Iran bought before he was deposed in 1979. If Congress approves, Boeing might begin selling airplanes as well. When an Iranian friend was complaining about conditions in her country, I joked, “At least, you don’t have McDonald’s.” She replied, “But we want McDonald’s. It’s terrible, but it would mean we are normal.” 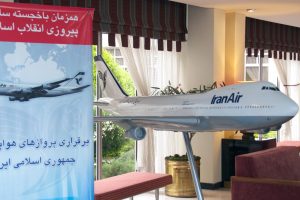 FOUR. Iranians are already among the most modern–and youthful– people in the world. The UN reports that sixty per cent of Iran’s 76 million people are under the age of thirty. It is not unusual to see young men and women holding hands in Tehran’s Jamshid Park or sipping espresso in the cafés of Tehran’s many shopping malls.The level of education is higher than in most western countries. Ninety-eight per cent of the youth are literate. A friend of mine from Iran put her daughters in school in London, where they immediately went to the top of the class and excelled in science. The slogans that motivated a previous generation to overthrow the Shah in 1979 mean less to today’s youth than finding decent jobs and houses.

FIVE.  With sanctions having driven them into poverty (not unlike the way the international bankers have starved the Greeks)  Iranians today know that America holds the keys to their financial future. No one wants to forfeit the positive developments in education and health made since the Islamic Republic came into being in 1979. You have only to watch Iranian director Rakshan Bani-Etemad’s film Tales to understand Iranian diversity. Bani-Etemad’s seven interwoven stories of lower class life in Tehran demonstrate, as a visit to Tehran would do, that people’s concerns are more personal than political. They don’t like being pushed around by bureaucrats, and women demand fair treatment from their husbands. The young respect the old in a manner the West abandoned long ago. Americans who come to make money in Iran to need understand that, if they behave as they did under the Shah, the bomb lobby may regain the ascendancy.

SIX.  Iran stands on the threshold of perestroika and glasnost, although the actual Russian model does not appeal to most Iranians. When the Soviet empire collapsed, Russia suffered years of chaos that led to today’s elected tyranny. Iran is an empire of peoples: Persians, Kurds, Azeris, Baluchis, Armenians, Arabs, Muslims, Christians, Jews and Zoroastrians. With a new openness and the freedoms that come with it, fears that the country might break into constituent parts as the Soviet Union did are only realistic. Diplomatic detente with the US, and a growing American stake in the Iranian economy, should lessen American encouragement of secessionist movements.

SEVEN. The US and Iran have common geopolitical interests. The US went to war with Iran’s most troublesome enemies: the Taliban in Afghanistan and Saddam Hussein in Iraq. Tehran and Washington are battling the self-styled Islamic State in Iraq. Differences remain. Iran champions the regime in Syria, the Shiite majority in Bahrain, the Shiite minority in Saudi Arabia, the Houthis in Yemen and Hezballah in Lebanon. The US opposes them all, mainly because Iran supported them. These differences, though, are not about the survival of  Iran or the US. They are negotiable, and discussion may achieve more than confrontation has.

EIGHT. Iranians, known as subtle and clever negotiators, believe they can hold their own, and more, in the arenas of international commerce and finance. The late Eduardo Galeano, whose We Say No became a catchphrase for Latin Americans struggling against American domination, wrote, “The big bankers of the world, who practice the terrorism of money, are more powerful than kings and field marshals, even more than the Pope of Rome himself. They never dirty their hands. They kill no-one: they limit themselves to applauding the show.” Yet the Iranians are confident they can outfox the bankers. Good luck.

NINE. There was no Iranian revolution in the Soviet sense. The ayatollahs did not abolish capitalism. They took it over. North Tehran remains the redoubt of a financial elite who live behind their garden gates much as they did under the Shah. Caviar, vodka and wild dancing are not unknown. A few mullahs moved into the neighborhood, but they distributed favors without redistributing wealth. The US at the beginning of the revolution in 1978 was not unhappy that the religious parties were crushing the leftists, who promised to share out the wealth among the population. The mullahs hate communists and trade unions more than Rupert Murdoch does. They should get along just fine with corporate America.

TEN. Israel’s Binyamin Netanyahu and the Saudis hate the agreement. That alone should be enough for the West and Iran to embrace each other.