Is Jeb Bush the New Obama?
Who: What: Why:
Reading Time: 2 minutes 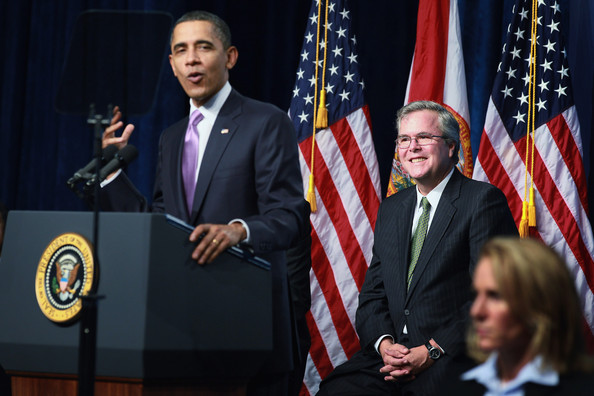 “There are things that we could do given the scale of our military to send a strong signal that we’re on the side of Poland, the Baltics and the countries that truly feel threatened by the ‘little green men’, this new cyber warfare and these other tactics that Russia now is using,” Bush said, employing a term used to describe covert Russian forces. “I think we ought to consider putting troops there for sure.”

“He’s got to make a decision,” said Mr Obama. “Does he continue to wreck his country’s economy and continue Russia’s isolation in pursuit of a wrong-headed desire to recreate the glories of the Soviet empire, or does he recognize that Russia’s greatness does not depend on violating the territorial integrity and sovereignty of other countries?”

Now Bush is obviously advocating a much more militant line against Putin than Obama. However, as the Victoria Nuland phone leak and complicity in the Maiden coup in Ukraine illustrated, Obama is very intent on halting Putin’s effort to ‘recreate the Soviet empire’. So much so that troops have been already been deployed – more than once. So Jeb’s proposal just adds fuel to an already burning fire.

And you thought Obama was a Democrat. Or, well, maybe you thought Jeb Bush was a Republican. At this point, there is little difference.

Now what does Hillary think?