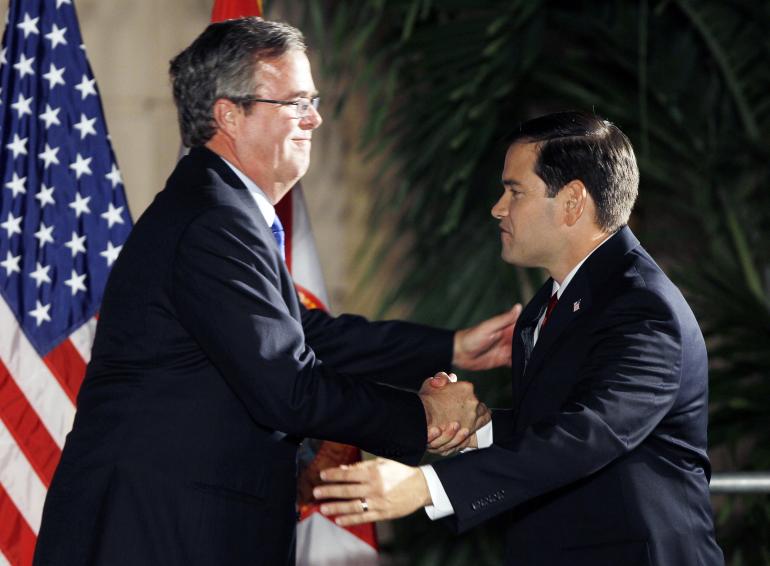 A subtle jab carrying Marco Rubio’s 2016 campaign is that he is ‘new’ and other candidates in the race are ‘outdated’. Well Bernie Sanders and Hillary Clinton are certainly getting on in years, yes. However, they are not Rubio’s immediate opponents. That can only mean Rubio’s dig is meant for someone in his own party. Namely Jeb Bush.

“[On Tuesday] Rather than playing up his Florida state ties, or his personal background, Mr. Rubio stuck to the bold letters that appear on his campaign signs, working in some version of the sentiment “new” into nearly every sentence. It is a theme that not only calls to mind his relative youth, but also subtly contrasts himself with candidates whose family names — Clinton and Bush — have been so dominant in Washington politics for decades.”

Bush responded quickly, not believing that, “…my good friend Marco would be critical of his good friend Jeb.”

Now, despite Rubio’s uphill battle amongst all the other Republican candidates and a name like ‘Bush’, why would the other Senator from Florida take aim at his ‘good friend’?  Especially since, contrary to the common-held belief, a President and Vice President can be from the same state.

The answer is ideology.

Rubio and Jeb are born-and-bred Establishment Republicans. They’re not Tea Party candidates like Rand Paul or Ted Cruz, nor are they fringe-ers like Lindsay Graham, Bobby Jindal, or Rick Perry.

Rubio and Jeb are relatively moderate on social issues (e.g. Immigration), pro-Religion, wary of Climate Change, and pro foreign intervention. Thus, there is little cleavage between what the two candidates stand for.

Rubio sees an opportunity to not only corner the Latino vote, but also young voters. Jeb, while speaking in Spanish and employing wife Columba to fundraise, is plagued by young voters memory of Brother George; as well as some recorded spats with young voters. Perhaps that is why some of his brother’s most vocal supporters are hesitant to embrace Jeb?

That leads to the final question: Are people like Karl Rove and Ari Fleischer simply waiting for Jeb to announce before adding their support — or do they see a new future in the other candidate from Florida?