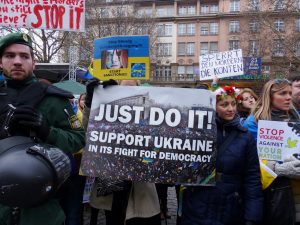 The West’s support of the Ukraine revolution could have been a tipping point in bad relations with Russia.

You know you have a problem when Henry Kissinger and Noam Chomsky agree on something. But then, the Ukraine crisis can create strange bedfellows. Kissinger and Chomsky agree that the Obama’s administration and its EU allies helped stir a tragedy in Ukraine by misjudging Ukraine’s critical significance to the Kremlin.

The fault-finding with the West’s clumsy affronts to Putin’s Russia may, in fact, have only just begun: A recent British Parliament report described Western strategy in Ukraine as “sleepwalking.” At times, the critical analysis borders on the absurd. The British are “explaining” their role in the mess by claiming they didn’t have enough diplomats with Russian skills to follow the situation properly.

But there’s nothing funny about the mess itself. The West’s failure to understand Putin’s strategic interest in  Ukraine helped spawn a civil war with thousands of casualties, hundreds of thousands displaced, and a country torn apart in such a way that it would take a miracle to put it back together. Even in the West, there is a vibrant community of foreign-policy pundits who acknowledge this debacle. Among them are the declining stars of the old Cold War, who are charging their successors with recklessly helping to start a new one by insisting that Ukraine join NATO.

Of course, a loud chorus of opportunistic politicians as well as predictable voices in the press continue to paint Vladimir Putin as the sole villain in this tragedy. Now, to be sure, there is plenty to criticize in Russia these days—from political murders of dissidents to covert military support for the Ukrainian rebels to high-pitched sabre-rattling at home, complete with national TV showing footage of nuclear-tipped missiles rolling out of silos. But it’s one thing to criticize where criticism is due. It’s quite another to declare, as German Chancellor Angela Merkel reportedly did last year, that Putin may be out of touch of reality and is living “in a different world.”

A more nuanced view of what’s happened in the Ukraine begins with the West’s determination to expand NATO to Russia’s very borders. In 1998, after NATO extended membership in the military alliance to Poland, Hungary and the Czech Republic, George Kennan, the man who devised the original Western doctrine of deterrence against the Soviet Union half a century earlier, warned:

“I think it is the beginning of a new Cold War. I think the Russians will gradually react quite adversely and it will affect their policies. I think it is a tragic mistake. There was no reason for this whatsoever. No one was threatening anybody else. This expansion would make the Founding Fathers of this country turn over in their graves.”

Kennan’s words are echoed by the aging Mikhail Gorbachev, the Soviet leader credited with bringing down the Iron Curtain. Gorbachev insists that the West went back on a promise made to him not to enlarge NATO east of Germany. And he warned earlier this year that the West is “dragging” Russia into what could become a “hot war.”

As for Putin’s mental state? Stephen Walt, the star realist at Harvard’s Kennedy School of Government, argues that the wrong application of Kennan’s original doctrine of deterrence has led to the explosion of violence in Ukraine. In a January Foreign Policy article, Walt contended that Putin is “motivated primarily by fear or insecurity”—rather than over-vaulting ambition—and that “applying the deterrence model [issuing warnings and credible threats] to an insecure adversary will heighten its paranoia and fuel its defensive reactions.” 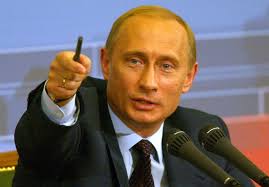 In Russia Putin is perceived as a meritocrat, the political likes of which the West just doesn’t possess right now.

Putin himself projects a rather different image. Russia’s elites perceive him as a triumphant meritocrat, a strategist whose equal the West doesn’t have and hasn’t had since Churchill or Reagan. This is the view of  Victor Mizin, vice president of the Center for Strategic Assessments in Moscow. Mizin adds that Russian insiders are highly skeptical of President Barack Obama’s foreign policy skills and see him at this point as merely a “lame duck.”

Mizin and and many of his counterparts among Western analysts dismiss the occasionally grotesque propaganda circulated by the Russian government in Moscow as strictly for homefront consumption. They believe that Putin is rational in his foreign policy and that the West should reach out and make a serious offer to him, taking in mind Russia’s strategic interests.

Putin may be no Churchill, but for all his authoritarian leanings, neither is he the dictator that Western observers often make him out to be. With his 80-plus percent domestic popularity ratings and his considerable reach throughout Eastern Europe—even across the continent—he has demonstrated that if, anything, he is more in touch with certain local realities than are his opponents.

Meanwhile the post-revolutionary Ukrainian government, to whose aid the US is sending military advisers over Russia’s objections, is hardly any more democratic or reliable as a partner than Russia is. Ukraine has, for example, clearly surpassed Russia in politically motivated murders over the past few months. The Ukrainian economy is nearing a total collapse.

The most enthusiastic fighting units in the Ukrainian forces appear to be made up of former criminals and neo-Nazis; the low morale of the regular army was on full display two months ago as the beaten soldiers pulling out of the Debaltseve battle gave in to several days of massive looting and drinking on their own territory.

Ukraine is not only divided between East and West, Russian-speaking and Ukrainian-speaking regions; it is also an uneasy mosaic of different ethnicities and religions, often concentrated in certain geographical enclaves. If law and order continue to unravel in the country, it’s hard to predict where the next trouble spots will be. What seems most likely is that Russia will play an important role in this process—either as a peacemaker, in the event a more comprehensive deal can be reached that protects its interests, or as a spoiler.

There is a long history of US and European leaders slighting Russia on various policy issues, from going around the UN to attack several countries to refusing to expand NATO. Ukraine is just the latest and most serious example to date. In any case, it’s time to take Putin seriously. The alternative would be the “Bosnia-ization” of Ukraine, as Mizin put it, or the chaotic fragmentation of the country into several warring statelets. And that kind of “trouble” might be difficult to keep from spreading beyond Ukraine’s borders.