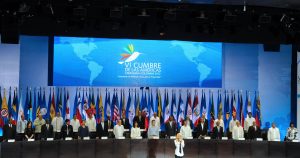 When Barack Obama took office, there was a lot of goodwill in the hemisphere toward the new US president. But the relationship between the dominant power in the region and its neighbors has been deteriorating ever since. Ahead of this week’s “Summit of the Americas,” that relationship reached a new low when the administration labeled Venezuela an “extraordinary threat” to the US, in an executive order Obama signed in March.

Ecuadorian President Rafael Correa said Obama’s calling Venezuela a threat was “embarrassing,” and labeled the move symptomatic of the US trying to “destabilize the progressive governments in the region.” Correa also called it a “bad joke,” reminiscent of “the darkest hours of our Latin America, when we received invasions and dictatorships imposed by imperialism. Will they understand that Latin America has changed?” Uruguay’s President José Mujica countered bluntly that whoever believes that Venezuela is a threat to the US has a “screw loose.”

Venezuelan President Nicolás Maduro, blasted back, “you are the threat to the people of the United States, you who decide to invade, to kill, to finance terrorism in the world.” Even Venezuela’s political opposition disagreed with Obama’s decree. Opponents of the executive order said that Obama’s actions interfered with sovereignty, meddled in internal affairs, and might violate international law.

US allies have also rallied against the decree. Colombia echoed regional neighbors’ comments that seeking dialogue between nations is the way to build relationships, not unilateral actions. “History has demonstrated that unilateral sanctions are counterproductive in the long run. For this reason, on principle, we have rejected them,” said Colombian President Juan Miguel Santos.

Regional alliances, among them the Community of Latin American States, CELAC, representing the entire region, and the Union of South American Nations, UNASUR, also backed Venezuela. International objection to Obama’s move came from Russia, China, over 100 British politicians, and the 134 developing nations in the UN G77+, which includes most of the African continent and South, Southeast, and Western Asia. In the US, over 100 prominent academics, organizations, and activists urged the president to retract the decree, saying it may “be taken as a green light to the most hard line and anti-democratic forces in the country to continue to commit anti-government violence.” 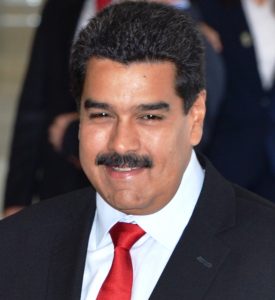 The topic will likely be raised at the two-day summit that starts on April 10 and will be held in Panama. Representatives from 35 nations are expected to attend. Eight million have signed Maduro’s petition calling for the rescinding of the executive order. He plans to give them to Obama at the summit.

The administration has since attempted to backtrack, stating that Venezuela does not actually pose a threat to US security but that the language in the executive order was a necessary part of the process of imposing sanctions on Venezuela.

In order to smooth things out ahead of the summit, a senior advisor to Secretary of State John Kerry traveled to Caracas for a surprise meeting with Venezuelan officials earlier this week.

The official reason for the order and the sanctions was to “demonstrate the United States’ commitment to advancing respect for human rights, safeguarding democratic institutions, and protecting the US financial system from the illicit financial flows from public corruption in Venezuela,” according to a Department of the Treasury document on the issue.

“We will continue to work closely with others in the region to support greater political expression in Venezuela, and to encourage the Venezuelan government to live up to the region’s shared commitment to promote and defend democratic governance,” the Department of the Treasury stated.

Not the new Cuba

When Obama announced that he planned to thaw relations with Cuba, he probably had expected a different reception at the summit. It is the first time in the summit’s 21-year history that Cuba will participate. The US is still deciding whether or not to take Cuba off the state sponsors of terrorism list.

“If Obama’s intent was to be welcomed and congratulated on the new US–Cuba relations” at the Seventh Summit of the Americas, then he has “blundered it,” Miguel Tinker Salas told WhoWhatWhy. Salas is a professor of Latin American History and Chicano and Latino Studies at Pomona College, and author of The Enduring Legacy: Oil, Culture, and Society in Venezuela. “He will be confronted by a unified response from Latin America instead,” Salas said.

Latin American nations are not on board with Obama’s attempt to make Venezuela the new Cuba, he adds. “Sanctions didn’t work in Cuba, why would they work in Venezuela?”

The US fails “to recognize Latin America has changed and they’re no longer the US’s backyard,” Salas said. “[Latin American countries are] pursuing their own independent foreign policy that is at times at odds with US policy.”

Salas says that dialogue between the US and Venezuela will hopefully prevail post-summit, and the US will retract the decree. Ecuador is willing to facilitate negotiations between the two.  “If the US really wants to engage, do it with mutual respect and a respect for sovereignty,” said Salas.

The US currently imposes sanctions on 28 countries, including Venezuela, Cuba, North Korea, Syria, and Iran.

The elephant in the room

Sanctions are just one part of the economic story.

Madura believes the US is pursuing a “strategically planned oil war” that aims to destroy US enemies such as Venezuela and Russia. The Organization of the Petroleum Exporting Countries (OPEC), which is de facto led by US ally Saudi Arabia, has flooded the market with oil, resulting in a steep drop in oil prices. Some of the hardest-hit oil-producing countries are coincidentally US enemies: Iran, Venezuela, and Russia.

When oil prices were high, any form of sanctions would have had less of an effect on Venezuela’s economy. Now, however, they are likely to be much more effective. The IMF said recently that the fiscal position of Venezuela, as the region’s top net oil exporter, “will suffer the most from the decline in world oil prices.”

Salas believes that the US is going after Venezuela for oil, as well as to reclaim power in the region. “It’s political and economic. Oil is invariably an issue in dealing with Venezuela, it’s inescapable. Venezuela has the largest oil reserves in the world; US corporations would like access to this and we saw this in re-nationalization of 2002, and the government put restrictions against that. You can’t separate politics and oil,” Salas said.

As far as the political aspect, Salas says that both Bush and Obama targeted Venezuela because they want regime change in the area. Why Venezuela? “It represents the tip of the iceberg in Latin America” along with other leftist countries, said Salas. “It’s about the US seeking to reclaim hegemony.”

Other reasons for an icy reception

Other US actions loom large over the summit as well.

Brazilian President Dilma Rousseff, for example, will have her first face-to-face with Obama since she angrily canceled a state visit to Washington, DC, following Edward Snowden’s revelations that the US spied on her personal communications. Recently, Brazil and Germany convinced the UN to investigate unlawful snooping and privacy violations.

Obama could also face questions on a recent report from Colombia’s Historical Commission on Conflict report that details how US soldiers raped Colombian girls.

In any case, Obama will experience a reception that is far different from the enthusiastic and hopeful one he received at the Fifth Summit of the Americas shortly after his inauguration. At the time, he told attendees that, “every one of our nations has a right to follow its own path.”

And so they have. In the last few years, Latin America has formed a powerful regional alliance as a counterweight to US economic interests. Obama has hopefully learned the lesson that diplomatic actions speak louder than rhetoric when it comes to national independence: Bush-era tactics of unilateralism won’t work anymore in an area that’s used to multilateralism. To restore regional goodwill toward the US at this year’s summit could be a tall order for Obama to fill.