An image of Tsarnaev posing with the above flag caused many to label him a jihadist. Though the emblem, known as the Black Standard, has been co-opted by radical Islamists in recent decades, it is not exclusively so.

In the days leading up to two of the most infamous terrorist attacks on American soil in the 21st century, none of the suspected perpetrators appear to have been actively preparing for jannah, Islamic heaven, in pursuit of jihad.

“They [the 9/11 hijackers] are spotted more at go-go clubs than at mosques,” said the mayor of Paterson, New Jersey, where some of the 9/11 hijackers were living in the months leading up to the attack. Other sources cite that the hijackers visited Las Vegas several times in 2001 and engaged in behaviors condemned by Muslim leaders. Dr. Osama Haikal, president of the board of directors of the Islamic Foundation of Nevada, told The Telegraph at the time that, “true Muslims don’t drink, don’t gamble, don’t go to strip clubs. These things are a sin, just like what they did in New York and Washington is a sin.”

Similarly, neither Tamerlan nor Dzhokhar Tsarnaev seem to fit the stereotypical description of religious zealots.

Dzhokhar Tsarnaev’s classmates and friends claim he was a pot-smoking party boy, even attending a University of Massachusetts–Dartmouth party two days after the attack. Tsarnaev smoked copious amounts of weed and regularly consumed alcohol, which are considered haram, or forbidden, in Islam. Dzhokhar had been spotted much more frequently at house parties, and Tamerlan at night clubs, than either were seen at the mosque.

Despite this obviously un-Islamic behavior, the prosecution has made repeated attempts to paint Dzhokhar Tsarnaev as a religious fanatic. 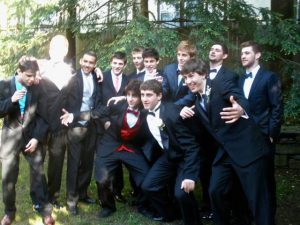 Dzhokhar Tsarnaev and his friends before his prom.

Zeroing in on Dzhokhar’s Twitter account, @al_Firdausia, FBI Special Agent Steven Kimball falsely identified his background photo of Grozny, the Chechen capital, as the holy city of Mecca. Kimball also misidentified a quote from the Quran tweeted by Dzhokhar as a quote from the words of Muslim cleric Anwar al-Awlaki, an al-Qaeda spokesman who was killed in an American drone attack in 2011.

The government dedicated a day of testimony to discussing a black flag below which Dzhokhar had been photographed—a banner that most  reporters identified as a “jihadi” flag.

The flag, in fact, is not a jihadi emblem. As WhoWhatWhy’s Lara Turner reported, it is known as the Black Standard or the Shahaha flag, and contains the testimony of the Islamic creed (There is no god but God; Muhammad is the messenger of God). Pointing to this flag as evidence of jihadism, Turner noted, is equivalent to citing the presence of a cross in someone’s home as evidence of involvement with the Ku Klux Klan.

Mysteriously, a Lead Not Followed

More recently, the prosecution zeroed in on text messages between Dzhokhar and an unnamed acquaintance in which the two discuss Islam, jihad, and becoming Imams. Despite the prosecution’s claim that jihadism was the motivation for the attack, no questions have been asked regarding the identity of the person discussing jihad with the accused bomber.

Many radical jihadists pursue terrorism for non-religious reasons, and are not devout Muslims or even well educated on Islam.

One expert on the subject, Doug Sanders, wrote in his book, The Myth of the Muslim Tide:

“Rather than intense monastic religious devotees, they [jihadists] tend to be non-faithful individuals who are drawn to radical peer groups for political or personal, but not religious, reasons.”

Given the known facts about Dzhokhar’s un-Islamic behavior both before and after the bombing (drinking alcohol, smoking pot), the prosecution’s clumsy attempts to portray him as highly religious seem designed to appeal to some latent Islamophobia among the jurors rather than a dispassionate consideration of the evidence.