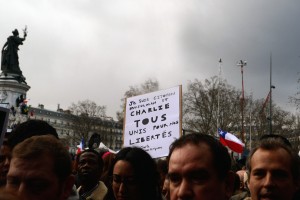 “I am Muslim citizen and Charlie. We are united for our liberties”reads a placard at the Jan. 11 rally for unity after the Paris terrorist attacks. By  Adrien le Coarer

Barely a week ago, an estimated 1.6 million people in France took part in a record-breaking rally for national unity after the attacks on satirical magazine Charlie Hebdo and a kosher grocery store.

The scene of millions of French waving flags and carrying placards with words of patriotism and hope was familiar, a kabuki play seen after terrorist attacks from New York to Boston and all points in between. The message was that it’s time to heal, now that the perpetrators of the French attacks appear to be dead and buried.

But once again, the big feel-good show hid a dangerous piece of the iceberg under the waterline. And it is the part of the equation most likely to stoke fear and extremism on either side of the Islam vs. the West narrative that has suffused most media coverage of the Paris attacks.

Despite the message of unity, the extreme right wing political party that may represent as much as a fourth of France’s electorate, the National Front, wasn’t invited. François Lamy, the organizer of the event for the ruling left-wing Socialist Party, was widely quoted as saying the National Front had no place at the rally, since they “divide the country and stigmatize our fellow citizens because of their ethnic origin and religion.”

A History of Exclusion

Indeed, the party known by its French acronym FN has a history of intolerance which now manifests itself in anti-Muslim and anti-immigrant rhetoric, and has included anti-Semitism in the past. So while it may seem fitting that France’s most exclusionary party was excluded, it is the political faction most likely to benefit from the anti-Muslim sentiments the Charlie Hebdo attacks have produced.

“What has happened is dangerous is because, although this demonstration presents the image of national unity, the 25 percent of the population who vote for the National Front weren’t invited,” Erwan Jule, who attended the Jan.11 rally, told WhoWhatWhy. That will probably mean more votes for the FN that cannot be ignored, he said.

Already, the FN’s leader, Marine Le Pen, has seized on the events to present herself as the emissary of the average Frenchman and to advance her anti-immigration platform. While French President Francois Hollande carefully avoided blaming militant Islam as the ideology behind the Charlie Hebdo attacks, Le Pen has explicitly called it the culprit. She even has attempted to woo some French Jewish voters by portraying Islam as France’s enemy.

Le Pen is known for her anti-Muslim rhetoric, having once compared Muslims praying in French streets to the Nazi occupation. Her attacks on France’s immigration policies are gaining traction among French voters: in last year’s nationwide elections for the European Parliament in Brussels, the FN surprised everyone by winning an unprecedented 25 percent of the votes.

Violence against French Muslims has risen since the attacks that began on Jan. 7. Since the events, the National Observatory Against Islamophobia has reported more than 50 anti-Muslim incidents in France (excluding Paris) and there are indications the number may be much higher.

At the Jan. 11 unity rally in Paris, one Muslim woman wearing a veil and a French flag draped over her shoulders, called the attackers “imbeciles” who, paradoxically, created more victims in the Muslim community they purported to be protecting. “We are against what has happened and we are angry. We are already victims of this event because we are Muslim, especially as all Muslims are placed together into one group,” Mme. Ben Salaam told WhoWhatWhy. She and her husband both attended the rally and declined to give their first names out of fear of retribution.

“We are French,” said Mr. Ben Salaam. “But at times like these, we are reduced to our ethnic origins.”

France has struggled with discrimination against immigrants from its former African colonies since the 1960s. While it is difficult to ascertain their exact number (because it is illegal to record statistics on religion and race), Muslims are estimated to represent about 8 percent of France’s population. 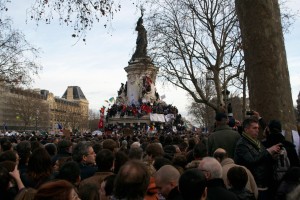 The Jan.11 unity march in Paris. By Adrien le Coarer.

For many in France, the immigration debate touches on the always-sensitive issue of French identity. Mainstream political parties have generally talked around the issue, preferring to pay lip service to an inclusive vision of French society free of racial division.

However, the likeliest outcome of the attacks is that efforts to fight extremism of any stripe will be matched by increased xenophobia, said Laurent Chalard, an expert on French political demographics at the European Centre for International Affairs. “There is a sizable part of the French population who can almost no longer accept the presence of Muslims…We will also have more and more Islamophobic reactionaries among the extreme right wing.”

If that becomes a reality, then the politics around the record-breaking rally will have unwittingly placed France further from the ideals espoused in its national motto: “Liberté, Égalité, Fraternité.” (Liberty, Equality and Brotherhood).

AI Is Helping Scientists Understand an Ocean’s Worth of Data