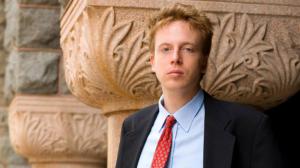 Even with a conviction secured by a plea deal, prosecutors doubled down against a brash journalist who dared to expose the national security machinery and threaten an FBI agent.

Hacktivist writer Barrett Brown’s sentencing in Dallas on Dec. 16 was supposed to be a one-day affair, ending with the handing down of a prison term of not more than eight-and-a-half years.

But prosecutors surprised the court and Brown’s defense team with hundreds of pages of evidence and exhibits to push for the longest prison term possible.

The sudden onslaught and ensuing testimony prompted Judge Sam A. Lindsay to order Brown to return on Jan. 22 to find out his fate.

His reports based on hacked e-mails were nothing short of astonishing. Working through his virtual research syndicate Project PM, Brown described:

• A “cyber-intelligence complex” of breathtaking expanse

As he continued to dig, Brown brought the hacktivist collective Anonymous to widespread attention by demonstrating what hacktivists and journalists could accomplish together. But Brown’s arrest in September 2012, after he made a series of hyperbolic rants against FBI Agent Robert Smith on YouTube, muted the  fireworks.

Brown’s instinctive defiance of authority and swaggering proclamations made him an easy target. The prosecution initially had alleged that he and Anonymous “secretly plotted the overthrow of the government.”

Prosecutor Candina Heath took full advantage of Brown’s bombast when questioning Smith, the FBI agent, on Tuesday. At one point, she asked Smith to read a statement from Brown in which he had said, in part, “my anarchism is my own.”

By then, prosecutors had already dropped the most severe charges Brown faced: those relating to his sharing of an Internet link containing stolen credit-card data, which the hackers of Stratfor had already posted publicly.

That accusation in particular brought sharp criticism from the Committee to Protect Journalists, Reporters Without Borders, the Electronic Frontier Foundation and others. Those groups and others submitted a friend-of-the-court brief challenging the government’s charges as a violation of the First Amendment.

And nothing in the case is more important, in terms of what’s at stake for journalists or anyone interested in reading hacked information in the digital age.

The government argued that the information was stolen property, and that Brown acted as a sort of digital “fence” by giving it to others. Heath told the court that “once credit card data is stolen, it remains a stolen item … (Brown) took data he knew to be stolen and purposefully trafficked it.”

The defense likened the credit-card data to a car that was stolen by someone else and left in a parking lot. All Brown did was say “go to the lot and look at the car. Mr. Brown didn’t get in the car and drive the car around,” defense lawyer Marlo Cadeddu told the court.

No matter what interpretation the judge makes, there is little doubt that Brown’s prosecution has had an immediate impact on journalism.

There are 16 comments Our Comment Policy: Keep it civilized, keep it relevant, keep it clear, keep it short. Please do not post links or promotional material. We reserve the right to edit and to delete comments where necessary.