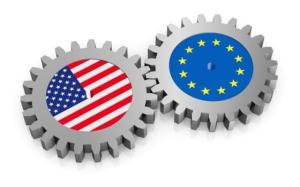 Cogs in the Free Trade Machine

The Transatlantic Trade and Investment Partnership is being sold as the world’s biggest trade agreement, with the potential to affect hundreds of millions of Americans and Europeans. So why is it being negotiated in near-total secrecy?

The pact has European food, labor and other advocates up in arms. They say the deal, known by its TTIP acronym, benefits corporations at the expense of the public.

Among the more grave potential consequences: environmental damage, reduced financial regulation, and the placement of corporate rights above those of sovereign nations.

Amid all the hush-hush, one fact stands out: a big place at the negotiating table has been reserved for lobbyists who represent multinational corporations. This has allowed them to argue against including in the final treaty a number of consumer-friendly regulations and standards.

At the same time, the lobbyists are promoting corporate-friendly provisions and a particularly vexing enforcement mechanism. This secretive arbitration court could effectively limit the power of sovereign nations to regulate businesses within their own borders.

The only reason anyone even knows about the clandestine terms is because of a revolt within the European parliament. The Green Party leaked sections of the negotiating papers, saying the public interest outweighed the need for secrecy.

Not surprisingly, that hasn’t stopped British and U.S. officials from trying to sell the deal as good news for consumers.

One British official estimated the final agreement would benefit British consumers by $16 billion a year. And American officials who are pushing the pact as a “debt-free stimulus” have accused opponents of TTIP of “scaremongering.”

So what do the “scaremongers” find most scary in the ongoing talks?

High on their red-flag list is the prospective, One-Percent-friendly, enforcement mechanism, which based on past history, seems likely to gain approval… Previous free trade agreements, such as the North American Free Trade Agreement (NAFTRA), set up secretive arbitration courts that have repeatedly forced governments to bow to the will of multinational corporations.

By ‘harmonizing’ America’s regulations with those across the EU’s 28 member states, standards governing food quality, rules protecting the environment, and restrictions on the risky behaviors of bankers that led to the 2008 financial crash could all be cut back—or removed completely.

Equally troubling are provisions that threaten recent efforts to rein in climate change.  A leaked excerpt from a secret negotiation text recently revealed plans to lift restrictions on the export of crude oil and natural gas from the US.

While the consequences may be disastrous, the impulse is understandable. Opening up the EU to US fossil fuels may free Western Europe from its current energy dependence on Russia. Multinational energy corporations have long been frustrated by the EU’s fuel quality standards, which effectively bar the import of American tar sands oil.

If TTIP provisions weaken them, it will mean a big windfall for Big Oil and Gas. That won’t happen without a fight. Europe’s politically significant “Green” parties have mobilized against any European imports of tar sands oil, which has been shown to be especially damaging to the environment.

Pro-TTIP forces claim the deal will save consumers $160 billion a year. Most of the savings are expected to come from scrapped regulations. The reasoning goes like this: cutting unnecessary rules reduces the cost of compliance (less paperwork, fewer employee-hours) and those savings will be passed along by corporations to consumers.

Of course, the devil is in the details: one person’s “unnecessary regulation” is another person’s life-saving guideline.

For example, under the proposed agreement, corporations may have a freer hand to force genetically modified food down customer’s throats. European environmentalists are worried the pact could weaken existing protections against substandard meat and produce, which are stronger than those in the U.S.

As unnerving as this prospect may be, Europeans are even more wary about changes in rules governing public services like health and education. So alarm bells went off in Europe when another leak revealed that water companies and “privately funded education services” are set to be included.

Worries about maintaining high-quality public services are especially acute in the United Kingdom, where the National Health Service (NHS) is thought to be endangered. Already, the current government has privatised large parts of the NHS. Trade unions want the changes reversed.

“The people of this country didn’t vote for selling off our NHS and they didn’t vote to make the sell-off irreversible by giving U.S. companies the right to sue us in secret courts,” says, Len McCluskey, general secretary of Unite, a group of UK and Irish labor unions. “It is an outrage that this government is prepared to expose our NHS to U.S. companies and Wall Street investors.”

Last month, British Trade Minister Lord Livingston confirmed that the government was not seeking to win an exemption to insulate NHS from the terms of the deal.

The net effect if the pact goes through as-is? The NHS couldn’t be re-nationalised by future governments without big business having the right to veto it.

This veto power is known in trade agreements as the ‘investor-state dispute settlement’ mechanism, and it’s been used countless times under the provisions of other trade treaties.

The U.S.-European trade deal is in a different league altogether. Firms are already warning they will not hesitate to act if it becomes reality. The dispute settlement mechanism allows companies to seek compensation whenever a government’s policies interfere with their ability to make profits.

Philip Morris, the tobacco company, is currently pursuing legal action against the Australian and Uruguayan governments for mandating plain packaging for cigarettes. The tobacco giant says it will do the same if its business is hurt in the United States or Europe. “Standardised packaging is a euphemism for government-mandated destruction of property,” the company declared.

Such rhetoric would normally be dismissed as posturing. But if TTIP is passed, the threat becomes serious.

“In future, governments would always be looking over their shoulder to see whether they would likely be sued for making laws in the public interest,” says Nick Dearden, director of the World Development Movement, an advocacy group.

TTIP challengers have stepped up their campaign to get citizens into the negotiations. A European Commission consultation—where the public is allowed to speak to the European executive branch—has triggered 150,000 responses, the vast majority of which have been hostile. Opponents are trying to get a million signatures under what’s known as a European Citizens Initiative, which would force a debate in the EU parliament.

That might actually make a difference. EU Trade Commissioner Karel De Gucht has already added his name to a letter from the Italian government calling for the EU’s negotiating mandate to be made public.

And Pascal Lamy, head of the World Trade Organisation, recently suggested that the secret arbitration courts could be omitted from the deal because they’re “not necessary”.

If the Transatlantic Trade and Investment Partnership goes ahead, it will be the largest bilateral trade deal in history. The stakes have never been higher, especially with a Republican midterm election win in the U.S. likely to improve the chances of passage. A little sunshine on the negotiations is long overdue.