Greed and rockets can be an explosive mix. Literally.

Nothing highlights this more powerfully than the Oct. 31 crash of Virgin Galactic’s SpaceShipTwo (in which a copilot died) and the explosion of an unmanned Antares cargo rocket three days earlier.

In the past, we saw public-funded ineptitude in tragic incidents such as the Challenger shuttle disaster of 1986—when NASA managers ordered a launch despite warnings that the O-rings sealing in the volatile rocket fuel might fail in below-freezing weather.

But those who think the profit sector always improves things should pay heed to what comes next in this era of rampant privatization.

The gold rush to the stars is underway. Private companies are assailing decades-old UN treaties that outlawed the ownership of heavenly bodies by individuals, countries and companies. “We are poised to carry the bad seed of greed, environmental destruction, and war with us into space,” Bruce Gagnon, coordinator of the Global Network Against Weapons and Nuclear Power in Space, told WhoWhatWhy.

Gagnon argues that private ownership increases the pressure to save money and cut corners. “The idea of launching unsuspecting tourists on board spacecraft built for profit first and safety last is frightening.”

As for shipping goods on unmanned rockets, you’d think a $1.9 billion contract from NASA would have made Orbital Sciences Corp. very, very careful about the vehicles it was using to speed deliveries to the International Space Station.

Instead, Orbital’s Antares rocket was fitted with outmoded Soviet engines from the failed Russian moon program.

Elon Musk, the man behind the Tesla car and CEO of Orbital’s main competitor, SpaceX (with a $1.6 billion NASA contract for space station deliveries), two years ago called the use of this ancient technology one of the “pretty silly things going on in the market.” He declared his competitor’s rockets a punch line to a joke. “They start with engines that were literally made in the ‘60s and, like, packed away in Siberia somewhere.”

In fact, Orbital’s engines – built in Russia over four decades ago –had been stored in plastic bags since the USSR canceled its moon program.

It turns out that American-made products offer no better assurance of safety-first quality. The Virgin Galactic SpaceShipTwo that disintegrated just two minutes into a test flight on Oct. 31 was manufactured in the U.S.A. 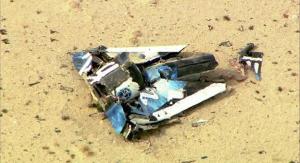 Some say inevitable cost-cutting may have limited adequate pre-launch test runs. As Marcos Caceres, director of space studies at the Teal Group consulting firm, told The New York Times:  “The pressure is to start operational flights too soon. Maybe we are being unreasonable here.”

Unquestionably, the pressure to go where no man has gone before is keen.

Virgin Galactic’s Sir Richard Branson announced in September that he hoped to be sending $250,000-a-pop customers like Leonardo DiCaprio and Justin Bieber into sub-orbit by spring.

Among the cheerleaders for full speed ahead was the pro-market magazine The Economist, which in an article praising small space satellites known as nanosats, called space the “next startup frontier.”  The subhead was none too subtle: “Where nanosats boldly go, new business will follow—unless they are smothered with excessive regulations.”

The “every man for himself” climate of today runs roughshod over the high-minded principles espoused during the original moonwalk, and in subsequent treaties that reserved the bounty of space to all humankind.

Next year, a California-based company called Moon Express Inc. (MoonEx) will send up its MX-1 spacecraft. Its mission: to “unlock the mysteries and resources of the Moon.” MoonEx promotional materials mention “commerce”—but only in passing, after “science” and “exploration.” It is almost as if the true objectives must be masked for reasons of taste and propriety.

Moon Express is just one of many private companies planning missions to space, and the moon in particular. Fox News reported, with no apparent wariness, that “Astrobotic Technology also plans to mine the moon, for example. Bigelow Aerospace wants to sell property there.”

If the rush to get rich off space exploration sounds familiar, look for the involvement of many of the same financial interests that assured us they would never take risks with our financial security.