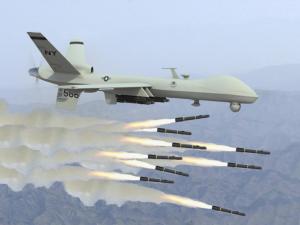 War on the Imminence Front: A Reaper drone rains down Hellfire missiles

In the counterterrorism realm, “imminence” is the magic word these days. The government need only utter it to hand itself a virtual license to kill.

Understanding how language can be marshaled for controversial and even bloody purposes requires the ear of a linguist and the mind of a contracts lawyer.

But the time to go back to school is now—with “imminence” seemingly exploding everywhere.

In the past few years, the term has been invoked again and again in reference to the thousands targeted by the United States drone program. And it pops up just about every time the U.S. plans another drone attack or military commitment.

Consider the repetition of the word in the latest round of justifications for more air strikes in Iraq and Syria.

Secretary of Defense Chuck Hagel warned that the U.S. must be ready for stronger commitments to fight the Islamic State of Iraq and Syria because it poses an “imminent threat to every interest we have.” The Khorasan group—a purported al-Qaeda “super” cell—landed on the American targeting list because it was planning an “imminent attack” against the West, said Pentagon spokesman Rear Admiral John Kirby.

So in light of the continued use of the word, it may be worthwhile to take a closer look at what U.S. officials actually mean when they use it.

Under international law, targeted killings may be justified if the attacking party acts in self-defense. That’s pretty understandable criteria. But disagreement abounds over what constitutes self-defense.

According to Article 51 of the United Nations Charter, member states have an inherent right to self-defense if an armed attack occurs against them. But many politicians and intellectuals see this understanding of self-defense as restrictive. That’s because it only allows states to react after an attack takes place.

The newfound pre-eminence of “imminence” springs from a desire to give the notion of self-defense a more flexible, modern definition.

An imminent threat is typically understood to involve urgency. In other words, it refers to a situation in which “the necessity of that self-defense is instant, overwhelming, and leaving no choice of means, and no moment of deliberation.” That standard, known as the Caroline test, has for years been the guiding definition for the international community.

But this more lenient construction wasn’t permissive enough for the U.S. The Justice Department, seeking elbow room, invoked imminence in an internal memo justifying the killing of Americans who are senior leaders of al-Qaeda or an associated group. It argued that such citizens could be killed legally because they present a threat of imminent attack.

Yet the definition of imminent, in the logic of that particular memorandum, is a flabby one at best. It “does not require the United States to have clear evidence that a specific attack on U.S. persons and interests will take place in the immediate future.”

International experts harrumph at this. That viewpoint “is deeply contested and lacks support under international law,” according to Philip Alston, the UN’s Special Rapporteur on Extrajudicial, Summary or Arbitrary Executions.

So the solution is simple: flout international law, and you have a virtual license to kill. Indeed, says Alston, the U.S. viewpoint advocates for a more “robust” form of self-defense that ignores established legal frameworks and “reflects an unlawful and disturbing tendency in recent times to permit violations of (international humanitarian law).”

The new-look imminence principle owes much to the “Bush Doctrine” of preemptive strikes. The latter policy declared that the U.S. is willing to take “anticipatory action to defend” itself “even if uncertainty remains as to the time and place of the enemy’s attack. To forestall or prevent such hostile acts by our adversaries, the United States will, if necessary, act preemptively.”

The Obama administration’s definition of “imminence” appears to be little more than an expanded continuation of the Bush-era’s indulgent interpretation of “preemption.”

Droning on About Pakistan

And it gets worse.

We have already seen how America’s very liberal interpretation of imminence has given rise to the “license to kill” that experts like Alston warned it would.

On top of that, there’s proof that the imminence doctrine has been twisted around to suit immediate political and diplomatic needs. In the process, the flimsiness of the excuses required to declare something or someone an imminent threat has been exposed.

The evidence comes from one of the lowest points in Pakistani-American relations. In 2011, an attack by U.S.-led NATO forces killed at least 24 Pakistani soldiers. In the ensuing diplomatic ruckus, Pakistan demanded that the U.S. stop drone strikes on its territory. Washington tried to sooth tensions by halting the drone campaign for a few months.

But wait a minute: how could the U.S. suddenly stop an urgent campaign—then in its seventh year—to destroy the myriad national security menaces roaming the wilds of Pakistan? Did all the imminent threats just dry up overnight, even though hundreds had been found and killed since 2004?

This becomes an especially perplexing riddle when one considers this: there were more drone attacks in Pakistan in the year before the program’s hiatus than in any one before or since. If the pause in U.S. drone strikes was a political maneuver, then the imminent nature of the U.S.-described threats can and should be questioned.

That’s not the only time the government has used the cover of imminence to suit political ends. The New York Times reported in 2013 that “American officials have at times tried to placate Pakistani officials by killing militants who pose a greater threat to Pakistan than they do the United States.” Some officials in Washington called such strikes “good-will kills.”

If that’s the case, then it means that international political and diplomatic considerations figure into the American calculus. Yet how can the U.S. justification of its targeted killing program—striking imminent threats to the United States—apply to the defense of other nations?

Many international observers predicted that the imminence doctrine would only encourage more war. They’ve been proven right. And since international law is only as strong as the weakest of the most powerful nations enforcing it, America’s respect for its letter and spirit will have an enormous global impact.

So the U.S. adoption of this bold new “imminence” may set precedent for other nations to follow. If it becomes the norm, the threshold for justifying state violence and war will be lowered significantly.