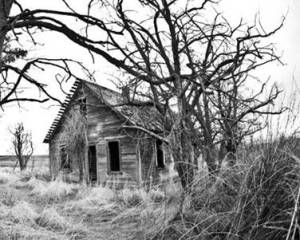 It’s cost $40 billion so far to clean up America’s biggest nuclear waste site—half the size of Rhode Island—and it’s going to take another 40 years and $100 billion to finish the job.

In the meantime, workers from the Hanford nuclear site in Washington State are still getting sick from exposure to any one of 1,400 chemicals identified there, while allegations of mismanagement, negligence and secrecy over what may be life-threatening risks persist.

And delays keep piling up even though at least a third of the aging tanks storing 56 million gallons radioactive waste have leaked or are leaking, pouring some of the world’s most dangerous contaminants into the Columbia River.

Yet the treatment plant to create safe storage for all that waste—which will remain radioactive for hundreds of thousands of years—still isn’t built. It should have been finished three years ago. And the Environmental Protection Agency  is skeptical that the plant’s current completion date of 2022 will be met.

Only Another 40 Years to Go

The plant is a crucial part of a wider remediation job that’s decades from being done, according to Dennis Faulk, the EPA’s program manager for Hanford

“I think we have another 40 years to go,” Faulk told WhoWhatWhy. “And another $100 billion will be needed over that time.” It costs about $2 billion a year to keep cleaning.

The Department of Energy’s internal watchdog last year blamed the department and the contractor that’s building the plant, Bechtel National Inc., for the delays. The Department of Energy’s oversight lacked focus and Bechtel implemented scores of design changes without subjecting them to the required nuclear safety review, according to a report from the department’s Inspector General.

Congress’ Government Accountability Office was harsher. It recommended shutting down construction until the design work is completed safely, and said the Department of Energy was prematurely awarding millions in performance incentives to Bechtel. Most critical work on the plant has been shut down. 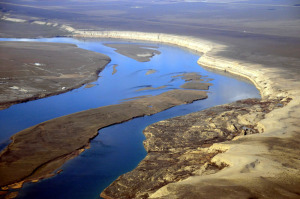 Meanwhile, Bechtel and another contractor are fighting whistleblower lawsuits from two former employees, and guess who’s paying for their legal fees? The Department of Energy is.

All of those complications are worsened by the fact that the search for waste keeps turning up surprises, like nearly 100 pieces of spent fuel found in Native American burial grounds. So as the Herculean task creeps forward, occasional new contamination findings like that add time to the clock, which means the projected completion dates are really only theoretical.

Hanford wasn’t built with an abundance of forethought. The job of making weapons-grade plutonium came first. Everything else, like planning for the waste and telling people about the release of radioactive materials, came second.

Hanford was one of the country’s primary production centers for nuclear weapons, from the 1943 to the end of the Cold War. Located along the Columbia River, Hanford supplied plutonium for hundreds, if not thousands, of bombs for America’s Cold War stockpile, and for the Manhattan Project, which helped end World War II while ushering in the nuclear age.

The War Department needed secrecy for the Manhattan Project and Hanford’s remoteness afforded that. So in 1943, it evicted the 1,500 or so farmers living in the towns of Hanford and White Bluffs and relocated six Native American tribes who’d lived there for centuries.

Hurry Up With the Nukes, Already

After World War II, the government decided that one reactor at Hanford wasn’t enough and built eight more to ramp up production of plutonium a material with a 24,000-year half-life. Hanford ballooned to 586 square miles in size. To put that in perspective, that’s nearly half the size of Rhode Island. And a bigger site meant there was more nuclear waste to deal with. 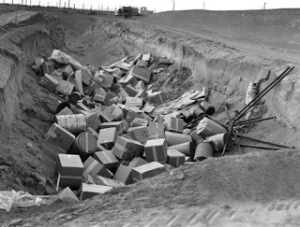 As much as a million gallons of radioactive waste have leaked from Hanford’s underground tanks—more than all of the leaks from all other nuclear facilities in the U.S. combined, according to Tom Carpenter, an attorney and the executive director of Hanford Challenge. The watchdog group represents Hanford workers and whistleblowers.

In a letter to Washington State Attorney-General Bob Ferguson in April, Hanford Challenge alleged that 38 workers had been exposed to vapors since March and urged the state to act where the Energy Department hasn’t. There are currently about 11,000 workers at the site.

Another 20 Years of Failure

Further, contractors at Hanford have had a string of problems, from corruption to failing to meet deadlines. That kind of performance by the Department of Energy and its contractors is why there’s no end in sight to the cleanup, he said.

“The one common denominator there is the Department of Energy and until you change them out as the manager of the cleanup, we’re going to see another 20 years of failure out there,” Carpenter said.

The delays are mainly due to the discovery of new waste, said Cameron Hardy, spokesman for the Energy Department’s Richland, Washington, office. He said most of the contractors now are “high-performing. There was the potential for a lot of abuse in the early years, but things have changed since then.”

Contamination levels in and along the Columbia River—an outdoor Mecca for sporting enthusiasts and backpackers—are unsafe for people living and recreating downstream, not to mention a major Chinook salmon spawning point close to Hanford, according to conservationists.

The river is full of some of the most dangerous contaminants in the world, says one environmental monitor. The site’s tanks are leaking into the soil, which ends up in the groundwater and eventually, the river, according to Dan Serres, conservation director with the Oregon-based environmental group Columbia Riverkeeper. 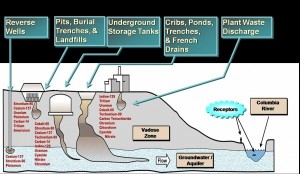 “In 25 years we’ve accomplished a lot in the cleanup, but the most difficult challenges lie ahead and the river is loaded with contaminants,” he said.

Part of the challenges ahead included finishing the waste treatment plant, and sealing up the nine reactors so they can be dealt with when the technology exists. Hundreds of support buildings have to be demolished, too.

“Once these reactors get cleaned up, there’s really not much left on the landscape,” the Energy Department’s Hardy said.

What’s on the landscape, however, isn’t the problem. It’s what’s going to be left in it.

Hanford and the Columbia River

IMAGE: Hanford and the Columbia River