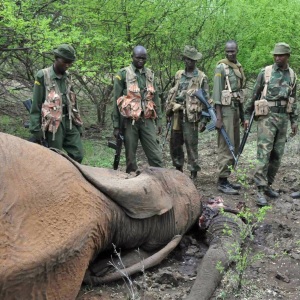 Elephant poaching in Africa is now on the radar of the American security apparatus.

The kind of people you’d expect to be talking about terrorists—instead of animals—are urging more military, law enforcement and intelligence efforts to stop the poaching of elephants for ivory.

And for good reason. Evidence that at least two groups the U.S. designates as terrorists are benefiting from ivory poaching has stirred the U.S. government’s security machinery into action and put its goals in line with those of conservation groups, which normally exist on different ends of the political spectrum.

Somalia’s al-Shabaab and Uganda’s Lord’s Resistance Army, led by Joseph Kony, are taking part in poaching or benefiting from its proceeds, according to a study by conservation group Born Free USA and conflict data analysis group C4ADS. That linkage has brought greater attention to other armed groups in Africa that kill elephants for their ivory, a business that generates as much as $1 billion a year, according to the study.

The potential cost is the extinction of the African elephant within a decade if the pace of slaughter continues, a point former Secretary of State Hilary Rodham Clinton made when she announced an $80 million commitment to fight the ivory trade last year through the Clinton Global Initiative.

She was, however, quick to make the link to groups like al-Shabaab and Joseph Kony’s Lord’s Resistance Army.

Her successor, John Kerry, announced a $1 million bounty for information leading to the dismantling of a Laotian ivory smuggling network, part of an increased U.S. push to combat wildlife trafficking that produces up to $10 billion a year that could also be funding drug and weapons trading.

Following that, President Barack Obama signed a National Strategy for Combating Wildlife Trafficking in February, which includes a provision to increase cooperation among intelligence and enforcement agencies. 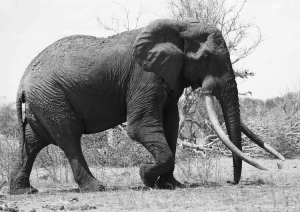 Satao, a legendary Kenyan bull elephant killed in May for his enormous tusks. Photo by TsavoTrust.org

As we’ve written before, there is, in the post-9/11 world, the potential to label a criminal problem like drug trafficking as “terrorism,” so the government’s authority to deal with it can be expanded into the military-intelligence sphere.

While that doesn’t appear to be the case here outright—the State Department calls it transnational crime and the White House strategy doesn’t use the word “terrorism” at all—the presence of terrorists in the poaching game is bringing a new kind of attention to a decades-old problem.

Nonetheless, conservation lobbies that want more stringent protections for elephants under the global treaty that governs the trade in wildlife products are seizing the moment. The treaty, the Convention on International Trade in Endangered Species of Wild Fauna and Flora or CITES, sets out the rules for the buying and selling of certain animal products.

The committee that administers the treaty is meeting July 7-12 in Geneva, and on their agenda is a proposal to increase the level of protection afforded to all African elephants.

In 1989, African elephants got the highest protection under the treaty, a category known as Appendix I, which effectively banned the global ivory trade. But since elephants in Zimbabwe, Botswana, and Namibia were removed from that list eight years later, followed by those in South Africa in 2000, poaching and the demand for illegal ivory increased, according to the United Nations and CITES.

The relaxed restrictions enabled the sales of existing stockpiles of ivory from China and Japan, and that made it easier for smugglers and poachers to introduce newly-killed ivory into circulation. With one elephant’s ivory worth an estimated $30,000, the attraction for criminals and even governments is evident.

That militants and terrorists would turn to a lucrative, illegal business to generate cash is no surprise. Armed groups have been doing that for a long time. For example, Sri Lanka’s now-extinct Tamil Tigers—a group that pioneered the suicide vest and grew powerful enough to raise an army, navy and air force—started off robbing banks.

Africa, a continent rich in resources but poor in law enforcement, is fertile territory for such activity. Al-Qaeda traded conflict diamonds from Sierra Leone to pay for its operations, exploiting the relatively easy access to millions of dollars of quick cash, undetectable to the globally monitored banking system.

Besides terrorist groups, corrupt military units and militias operating across Africa sell to cartels that, in turn, sell mostly to Asian markets, Adam Roberts told WhoWhatWhy. He’s the chief executive officer for Born Free USA. Nor is it a new phenomenon, he said: The Janjaweed militias that were active in Sudan’s Darfur conflict have smuggled ivory across Central Africa for decades.

The case of Joseph Kony’s Lord’s Resistance Army shows how symbiotic armed conflict is with poaching. The LRA, a Ugandan rebel group now infamous in the U.S. for its indiscriminate killing and use of child soldiers, ranges across the forests of South Sudan, the Democratic Republic of Congo and the Central African Republic. There, they kill elephants, then barter the tusks with Sudanese soldiers for weapons, according to Born Free.

For more details on the decline of the African elephant population, please click here. Chart by Natalie Lubsen at SavvyRoo.com

Easy to Recruit, Easy to Terminate

Kenya, which shares a border with Somalia in East Africa, is a good example of how the ivory business works from the bottom up, and demonstrates the difficulty in enforcing anti-poaching laws.

The Kenya Wildlife Service’s rangers are all trained as soldiers and carry assault rifles, yet they have massive expanses of territory to cover. And they are up against a variety of foes—from poor herders who poach to scratch out a living to Somali bandits and sophisticated, well-armed gangs, said the agency’s deputy spokesman Paul Muya in a telephone interview from Nairobi.

Porous borders and the ease of access to military-grade weapons enable the ivory cartels to operate freely and shield themselves through layers of organization. The people who do the killing sit at the bottom rung of the hierarchy and “are easy to recruit and terminate,” Muya said. They’re given weapons and paid relatively little by those who handle the packing, exporting and the bribery that usually ensues.

Al-Shabaab, Somalia’s al-Qaeda affiliate, takes part higher up the chain. Its representatives offer a higher price than other middlemen for ivory before it’s smuggled out of Kenya and Somalia, according to an investigation by the Elephant Action League, a Los Angeles-based non-profit that works against wildlife crime. 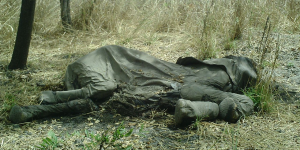 The carcass of an elephant killed for its ivory in Cameroon

The Elephant Action League’s approach to wildlife conservation is far more hawkish than most other wildlife protection groups. It advocates “using methods that were proven to be efficient in the war on drugs and terrorism.” Its executive director, Andrea Crosta, lists 15 years of experience advising governments and companies on “high-end security services, homeland security, investigation and risk management.”

Monica Medina, a former special assistant to two Secretaries of Defense, cited the League’s work in a New York Times op-ed urging greater military and intelligence action against poachers. In that article, “The White Gold of Jihad,” she linked the al-Shabaab attack on Nairobi’s Westgate shopping mall to the profits of elephant poaching. The White Jihad title, not coincidentally, was what the League dubbed its investigation.

Former Israeli soldier Nir Kalron is training 90 Congolese park rangers to fight back in one of the poachers’ favorite hunting grounds, Congo’s Garamba National Park. He runs the for-profit Maisha Consulting, and was one of the investigators, along with Crosta of the Elephant Action League, who uncovered al-Shabaab’s connection to ivory poaching.

“We are coming in as security people with a clear agenda and we bring money, equipment, and gifts,” he told WhoWhatWhy by telephone. “We speak their language…and preserve some sort of ambiguity.”

Earlier, Kalron said he and his team, who’ve engaged in gunfights with poachers in Garamba, were mistakenly identified as CIA operatives.

It’s worth keeping in mind that, already, the U.S. is building a better spying network across Africa, using private contractors and Special Forces operatives. That network is targeting Kony’s known stomping grounds and areas of Kenya and Somalia where al-Shabaab operates. It’s all part of a bigger expansion of the U.S. military’s Africa Command, which so far has no headquarters on the continent, but instead works via training exercises and small-group activities.

And guess what’s on its list of responsibilities: defeating transnational threats. Remember what Kerry called poaching? A transnational crime.

So it looks like the fight against wildlife poaching may be getting a makeover as yet another war.

5 responses to “Tusks for Terrorists: Ivory, Elephant Poaching and the War on Terror”