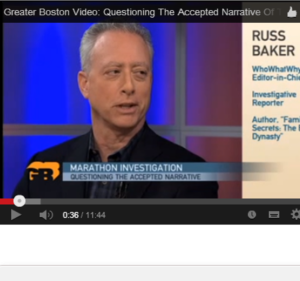 TV journalist Emily Rooney recently interviewed WhoWhatWhy’s Russ Baker about “Danny,” the mysterious carjacking victim in the Boston Marathon case. It’s a fascinating point-by-point on some of the big discrepancies Baker uncovered during his exclusive investigation of Danny’s story. Here are links to Part One and Part Two of his original investigation.