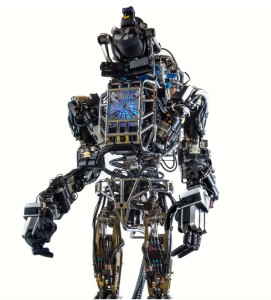 What will a robot army look like? Or more important, how will it behave?

These questions are timely ones given the Army general who in January announced to a symposium in Arlington, Virginia, that he had “clear guidance” to explore the replacement of human forces with robot ones.

General Robert Cone, Commander of the Army Training and Doctrine Command, told the audience his team is researching the feasibility of shrinking the size of the brigade combat team from about 4,000 soldiers to 3,000 over the coming years, filling the gap with robots.

Cone’s comments come at a time when the Secretary of Defense is already planning other ways to shrink the Army to its smallest size since before World War II.

While the military’s interest in a robotic force is hardly new, and ground robots that crawl or roll are already being deployed, an army of humanoid robots seems inevitable.

The Department of Defense issued a Directive in 2013 titled “Autonomy in Weapons Systems”—another sign of how seriously the military is taking this. Among other things, it “Establishes guidelines designed to minimize [emphasis added] the probability and consequences of failures in autonomous and semi-autonomous weapon systems that could lead to unintended engagements.” But the directive also requires that the robots will “Function as anticipated in realistic operational environments against adaptive adversaries.”

Coping with “adaptive adversaries” implies at least a degree of autonomy—and that is a discomforting notion for some. Opponents of these looming “soldiers” have already formed an online campaign, the “Campaign to Stop Killer Robots,” which argues that “Giving machines the power to decide who lives and dies on the battlefield is an unacceptable application of technology.”

DARPA—the Defense Advanced Research Projects Agency—has been actively funding robot research for years and this past summer showcased “one of the most advanced humanoid robots ever built”: a stocky 6’ 2” behemoth of a bot named “Atlas.” Its creators at Boston Dynamics (a company recently acquired by none other than Google, Inc.) say it is designed for disaster response, such as nuclear and chemical incidents. Atlas has no weapons, but it’s not hard not to blink your eyes and imagine a potential military future.

What makes Atlas most remarkable is its “humanoid” scale. It walks with two legs, has two arms, a bit of a head (maybe that’s a stretch), and moves in ways we find eerily familiar—not at all the sort of robot we see in use by the military today. The latter are usually four wheeled tractor-like creations with nifty arms. No, Atlas seems, well, human. It’s the difference between R2D2 and C3PO, to put it in terms Darth Vader might understand.

Humanoid robots are taking longer to develop not simply because they are more complicated—and they are—but because we want them to be almost human. That is a very high bar, but evidently not an insurmountable one.

Not only are such robots destined to be especially lethal, they may take on near-sentient capabilities at some point if quantum-computing powers ever fully develop. Quantum computing, in a nutshell, will allow for simultaneous calculations that modern computers can’t begin to approach—untold millions of tiny decisions being made at once. Not even a human brain can do that. There are physicists who claim to have proven that quantum computing is possible, demonstrating their success with calculators running “quantum” math. Most suggest it’s only a matter of time before quantum computers evolve. When that happens, quantum robot “brains,” technically superior to our own (in some ways), will surely not be far behind.

When that day comes, and it could be sooner than you think, General Cone and others in the military will have their…man.

Watch the video to see Atlas doing “his” thing, after a brief animated introduction.